July 7, 2020 by Alexandra Daum
This one-bowl vegan chocolate raspberry cake is topped with a creamy coconut milk ganache for a decadent summer dessert made with healthier ingredients.
Jump to Recipe 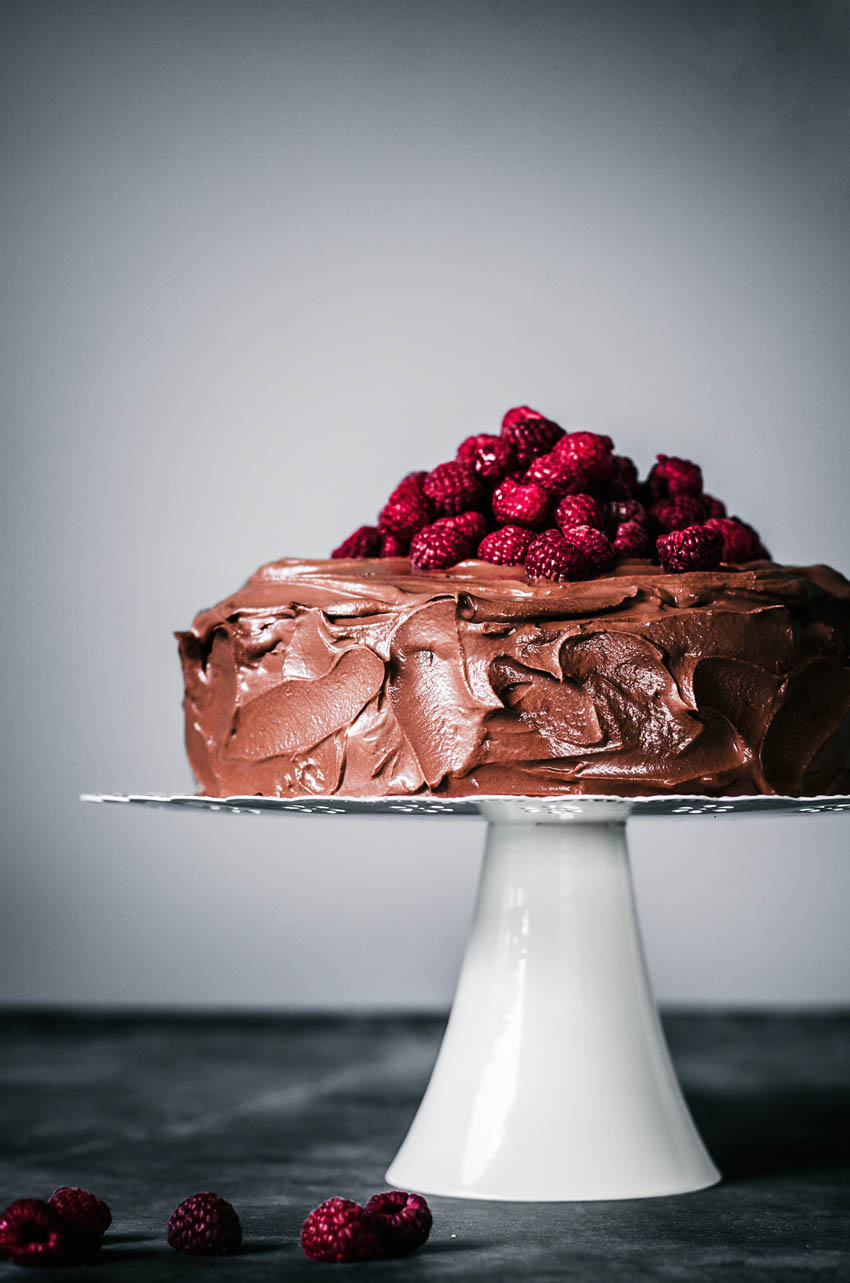 This recipe was originally published in July 2018. It’s been updated with improvements to the text and recipe as of July 2020.

Graham always gets a good birthday cake, since his birthday is in summer – this year it was this vegan, one-bowl, chocolate raspberry cake with a coconut milk ganache. It looks a bit fancy, doesn’t it? But it’s really simple, I promise, even the icing. I just tossed it on there and made some swoops with a spoon.

It’s a basic vegan chocolate cake, made with light spelt flour, cocoa powder, non-dairy milk, olive oil, and a little coconut sugar. I adapted it from my pumpkin and chocolate layer cake and reduced the sugar a bit. Half a cup of coconut sugar for a whole cake is pretty all right, I think.

The cake has a nice light texture and deep chocolate flavour, with some raspberries tossed in halfway through filling the tin with the batter for a berry surprise in the centre. This lightens an otherwise rather rich cake, and makes it into a properly summery dessert.

Preheat the oven and grease a springform pan with coconut oil. Add the flour, sugar, cocoa, baking powder, baking soda, and salt to a large bowl and whisk it very well – no lumps! Once it’s mixed, add the milk, oil, and vanilla, then stir until just mixed (don’t over-mix) and there aren’t any visible streaks of flour.

Pour about half the batter into the prepared tin, then scatter a generous handful of raspberries over it. Top with the remaining batter, then bake for about 45 minutes or until your cake passes the toothpick test.

It’s a single bowl method because dishes are the worst and cake shouldn’t involve more dishes than necessary, especially when hot water should be avoided at all costs during steamy summer weather. Mix, bake, cool, ice, done.

To make the ganache, place the chopped chocolate into a heatproof bowl. Heat the coconut milk in a saucepan until simmering, then pour over the chocolate. Let this sit for 30 seconds, then whisk to combine. This needs to cool fully in the refrigerator before icing the cake.

Since both the cake and the icing need plenty of time to cool fully, you might want to make them the night before you plan on serving them to ensure plenty of time for that. Warm cake means melting ganache and you don’t want that.

I need to write a whole post about this, I think, so that’ll be coming up soon. This recipe – along with these vegan chocolate tarts and chocolate hazelnut cake – uses a full can of coconut milk instead of scooping the cream from the can. It’s easier and less wasteful, and tastes just as good – if anything, it’s even easier to work with.

There’s a caveat, though, in that you need to be very certain that the coconut milk you’re using has a very high fat content. At least 65% is key. If it doesn’t specify, then stick to the safe side and scoop out the cream only. The cake linked above includes some tips on how to fix your ganache if it does turn out too thin, which will happen if you use light coconut milk or a brand that cheaps out on the amount of cream included.

The ganache is a full can of coconut milk, including the watery bit, four squares of baking chocolate, and some maple syrup. I’ve posted variations of this ganache before but this is the most streamlined & simple version yet. The trick here is to make the ganache and the cake the night before so everything has cooled down when you’re ready to assemble it.

Don’t worry about raspberries sinking to the bottom of the cake. The batter is relatively thick, and since they’re going in the middle rather than being mixed throughout, they’ll float in a nice even layer.

Make sure you’re using cocoa powder, not cocoa drink powder, which is something quite different. There should only be one ingredient. If you see anything like sugar, milk powder, etc., then it’s not for baking.

I don’t have a gluten-free substitution for this cake. A good GF blend might work, but I recommend going for a recipe that was developed specifically to be gluten free instead – like this one-bowl gluten free chocolate cake (it has a vegan option). You can, of course, use all-purpose flour in place of spelt for this recipe, and whole-wheat pastry flour works too.

Don’t have fresh raspberries? Use frozen, no problem. Strawberries, cherries, and apricots all make good alternatives, though I don’t recommend frozen strawberries here as they’re too watery. You can also leave the fruit out in a pinch and have an excellent basic vegan chocolate cake.

Olive oil can be replaced by any light-tasting liquid oil. Grape seed, avocado, and so on. I don’t like coconut oil in this cake, it makes it too heavy after cooling. Cane sugar can be used instead of coconut sugar if you prefer.

* You can use another light-tasting oil instead of olive, like avocado, but avoid coconut oil as it will make the cake too dense when it cools.