April 10, 2020 by Alexandra Daum
Easy vegan cinnamon rolls with just 8 ingredients and an optional overnight method. Made with a base of spelt flour and with a coconut sugar and coconut oil filling, but with plenty of substitution options!
Jump to Recipe 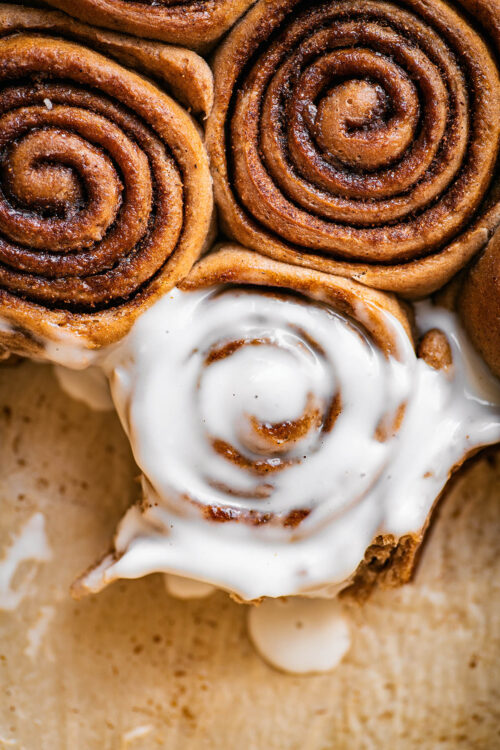 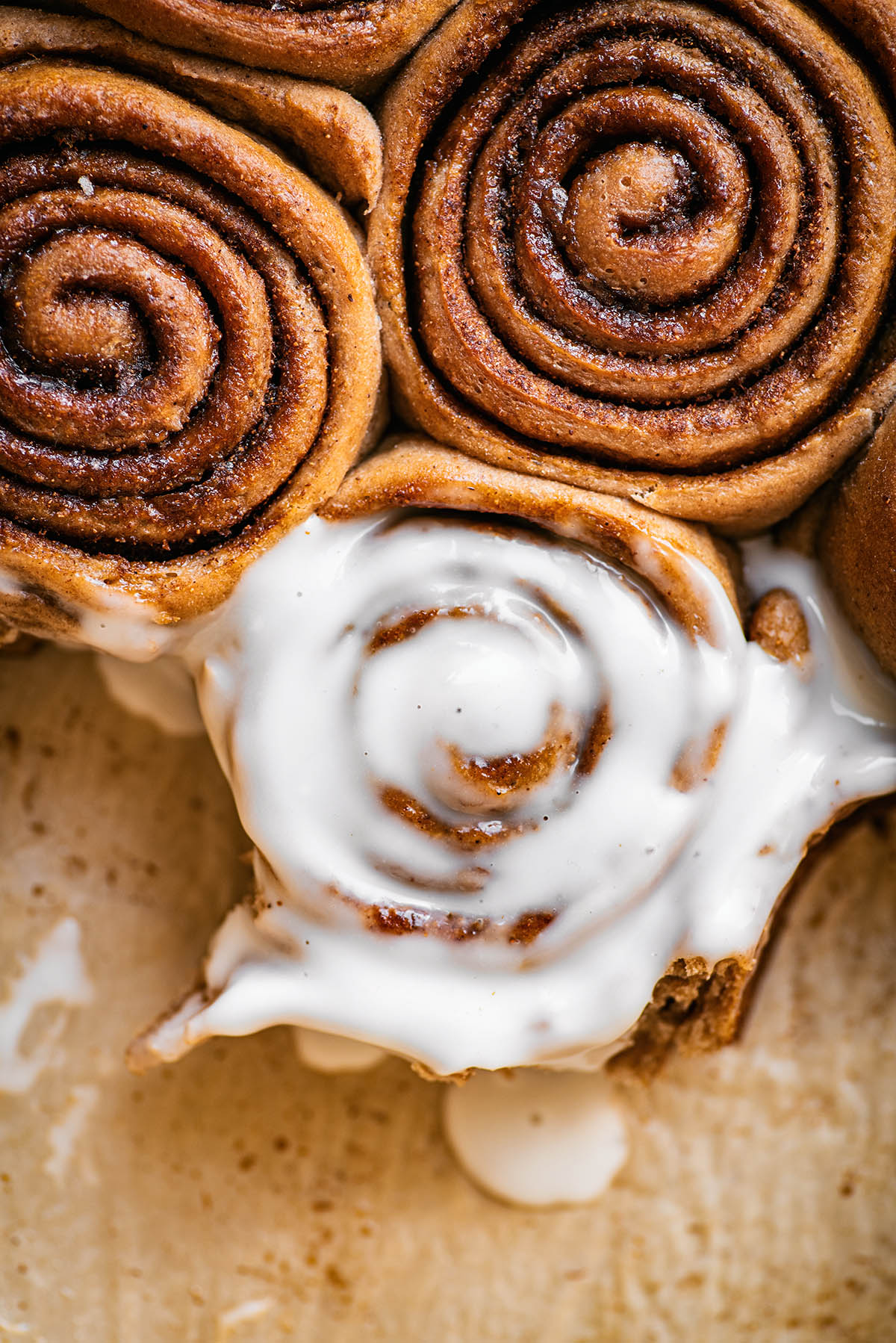 Vegan cinnamon rolls are my go-to for any family get-togethers – they’re surprisingly easy to make and everyone loves them. I promise that even the most die hard butter lover will like these, and probably won’t even notice they’re plant based.

A lot of cinnamon rolls and other sweet buns and breads call for eggs, for a brioche style dough. I’ve been making bread for a very long time and you can get a truly excellent texture and flavour without eggs. The key is to find the right balance of fat to flour to liquid, and then you don’t need eggs or butter.

If you’ve never made cinnamon rolls before, vegan or not, don’t worry! They are genuinely simple and I’ve added plenty of information, tips, and tricks to this post to make sure you get the best rolls you can. There’s also a video showing the process if you need more visuals.

Cinnamon buns are the best and you can make them at home! Yourself, in your own kitchen! They’re one of the very easiest breads to make, apart from my rye bread, maybe, and so much fun.

If you can make cookies, you can make these. It’s just mix, rise, roll, rise, bake. Time is the only real thing to consider, but if you make it into a weekend project or do the overnight method, it’s perfectly reasonable. I say a weekend project only because they’re a bit much for an average weeknight, but definitely don’t take the whole weekend. We’re not talking croissants here.

I have tried to make this recipe as beginner friendly as I possibly could, with just 8 ingredients total and plenty of process photographs to show exactly what you need to do. I want everyone to feel confident in baking bread at home and these are a good place to start. Even if you mess them up a bit they’re still cinnamon rolls and they’ll taste good.

I use light, aka white, spelt flour for almost every sweet bake. It’s easy to use, tastes great, and has a lower gluten content than all purpose flour. That means that it can be slightly harder to work with, but not noticeably so, and it’s easier for many people to digest.

Vegan labneh makes a great cream cheese-like icing, but you can have them plain (as I most often do) or with a simple coconut milk glaze.

I’m not a big fan of vegan butter (margarine, let’s be real) so I usually use grape seed or coconut oil in the dough, and then a bit of coconut oil in the filling. If you’re concerned about a coconut flavour, it’s really not there, but you could use refined coconut oil or margarine, and just look for one that doesn’t include palm oil.

The recipe calls for maple syrup in the dough (or honey, if you’re good with plant based and it doesn’t need to be vegan) and coconut sugar in the filling. The coconut sugar adds a great slightly caramel flavour that’s a bit like brown sugar turned up a notch.

Light spelt flour makes up the base of these cinnamon rolls – see below for substitutions there – plus dairy-free milk, the oil and sweetener, yeast, and, of course, cinnamon!

Some tips and tricks

There are some things to consider when you’re making cinnamon rolls or any other bread. Temperature, humidity, and ingredient changes can all drastically affect the recipe, so please keep these in mind when you’re baking.

Yeast isn’t finicky, necessarily, but it doesn’t like temperature extremes. If you add it to very hot or boiling milk, it’ll die. If it’s been kept in a warm place for too long before using, it’s probably already dead. If you’re not sure how old your yeast is, test a bit of it in warm water before using it – if it doesn’t bloom, or expand, after about 15-20 minutes, you need new yeast.

If you’re not going with the overnight method, you need a fairly warm, draft-free spot for your dough to rise in. An oven with the light on, a shelf above the radiator, or on top of the fridge are all ideal places. It will still rise if it’s in a cool place, it just takes longer.

Humidity is mostly referring to the humidity within the container the dough rises in, though the external humidity can play a role too. Use a damp tea towel or waxed wrap to cover your dough and coat the dough in a bit of oil before it goes to prove (rise) the first time. If the top of the dough dries, it can harden, and constrain the dough from rising as much as it should. (Plastic wrap sucks and you don’t need it.)

Some ingredient changes are fine, and I’ve outlined them in their very own section below. If they are not mentioned, I either haven’t tried them and can’t advise, or they are so outlandish that they definitely won’t work.

If you want to make these the day ahead, you can do a couple of things to slow the rise and bake them the following day. Since the rolls rise twice, either one of them can be done in the refrigerator to extend the process, since they’re much better fresh. I don’t recommend delaying the rise for both steps, just one or the other.

After kneading, the bowl with dough can be very well covered – I usually use beeswax wrap or a damp tea towel and a large plate – and refrigerated for 8-12 hours. After that time, it should be doubled in size the same way it would be after an hour in a warm spot.

Once the dough has risen in the fridge, you simply roll it out and follow the other instructions as written. It will come back to room temperature quickly and rise again once it’s rolled up into buns.

Alternatively, you can refrigerate the rolls in the dish you plan to bake them in, again for 8-12 hours. I like to brush the tops with a little oil or milk to keep them from drying, and then cover very well again with a damp tea towel or beeswax wrap.

They have to be brought back to room temperature before baking, though, which can take up to an hour, though it’s quicker if they’re in a warm place. If you try to bake straight out of the fridge they’ll barely rise in the oven.

Either method works well and can make things a bit easier for you if you want to serve the rolls for breakfast, for example. It also helps to develop the flavour a bit further and makes things taste a bit more interesting.

Kneading by hand vs using a stand mixer

In other words, do you really need to knead dough for ten minutes. You sure do! My editor was really shocked by this the other day but it’s just something that’s needed for yeasted dough (unless it’s an overnight rise, as in this overnight spelt bread). If you’ve ever watched bake off, you’ll see that they knead for ages and ages – think of it as exercise that completely offsets the cinnamon rolls so you can eat as many as you like.

If, however, you have a stand mixer, it’ll do the work for you! I don’t have one anymore, and most people don’t, so the instructions in the recipe are for kneading by hand.

To use a stand mixer, you simply start the dough from the beginning in the mixer and then use the kneading attachment. The instructions are essentially the same, adding flour bit by bit, and kneading until the dough is soft, smooth, and elastic. Use a lower setting, one or two, for this.

You can use all-purpose flour in place of the spelt, or a combination of the two. A bit of strong bread flour wouldn’t be amiss here, either, as long as you don’t only bread flour. I don’t recommend whole wheat pastry flour or going with 100% whole wheat or whole spelt unless you don’t mind a shoddy cinnamon roll – but also, it’s cinnamon rolls, go for the lighter flour.

I have not tried to make these gluten-free and probably won’t, but Sarah has a good gluten free cinnamon roll recipe and I can highly recommend her recipes. She doesn’t think that hers can be made vegan and still be structurally sound, but that they could definitely be made dairy free (I asked).

In terms of the dairy-free milk you use, there are a couple of things to consider. Oat and nut milk are always great. Full-fat coconut milk from a can will make them a bit too dense and sort of pastry like, reducing the stretchiness usually found in a yeast dough. Rice milk is too thin; soy probably works but I’ve never tried it.

As I mentioned above, you can use margarine in place of the coconut oil in the filling if you prefer. You can also sub date or brown sugar for the coconut sugar, or use date paste as in my chocolate orange rolls. White sugar makes these a bit boring and bland.

I don’t specify a type of yeast because they’re not differentiated here between instant and normal baking yeast, so we’re going to safe route and dissolving it in liquid beforehand either way. If you have instant yeast you can skip that step as long as you’re certain that your yeast is still active. The recipe specifies amounts for both fresh and dry yeast.

There’s not much else to change, really – I’m going to share a separate recipe for sourdough cinnamon rolls because the method is quite different, and there’s no other substitute for yeast.

If you have any questions that weren’t answered here, please ask in the comments below!

To make these rolls using an overnight method, either refrigerate overnight during the first rise (step 6) or the second (step 4). Make sure the cover the dish very well if using this method. If refrigerating for the second rise, bring the rolls back to room temperature before baking as instructed. * I usually use oat milk, but any thinner nut or grain milk will work. Don’t use full-fat coconut milk (see above for more substitutions). • If you see anything in the recipe that you’d like to sub, or seems confusing, please scroll up and read through the whole post – it’ll help.