October 3, 2017 by Alexandra Daum
Traditional Lebanese hummus and baba ghanoush, with an interview. The hummus is heavy on tahini and uses ice for a light, silky texture.
Jump to Recipe 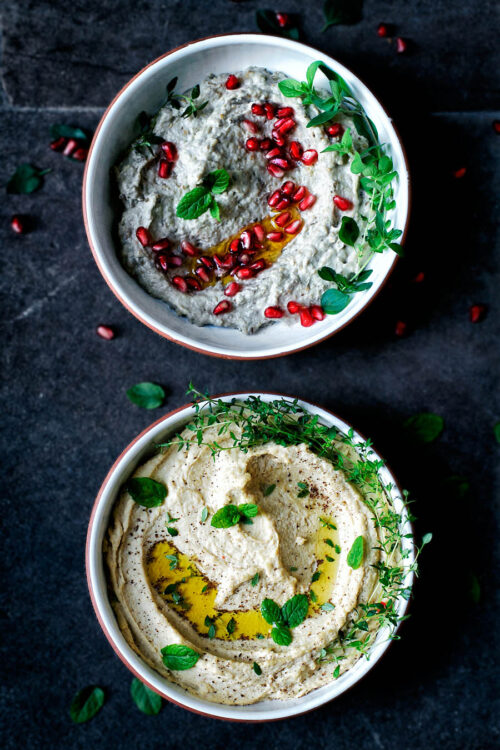 In a slight departure from my normal recipe post, this is based on a meal and interview with Khaled, a Lebanese immigrant to Germany. Khaled is a friend of a friend, Kristin, and they work together with refugees in a northern coastal city. He visited us a couple of weeks ago and we made Lebanese hummus & baba ganoush, and talked about food and living in Germany as a Lebanese immigrant. I’ve condensed the interview to share here (my recording was over two hours long) and you can read it below.

Where are you from?
I’m from Lebanon, and I’ve been in Germany since 2002. I came alone, and my brother and sister came a few years after me, but my other family still lives in Lebanon. It’s a beautiful place but there’s so much corruption there, and I can’t live with that.

Why did you move to Germany?
I came here to attend university. I studied electronics, chemistry, and physics at different times, but didn’t finish any of the programs. I’m planning on studying again, but nothing technical – I want to start pedagogy next year.

Have you experienced racist sentiment in Germany?
I think Lebanon is a lot worse, and that’s part of the reason why I chose to stay here. Lebanese people believe they’re superior to other Arabic people, especially Syrians. I haven’t personally experienced much. I would never live in the US now, though, not after they voted for Trump. There’s a lot of raw hatred for Syrian people in Lebanon. Before 1943, Lebanon and Syria were one country. In 1939 the French and English arrived; they stayed until 1943, and divided the countries. Palestine, Lebanon, Syria, Jordan, etc. So before there was one country, and now there are 22 Arab countries. [Similarly to many other parts of the world that experience war and strife following colonialism, especially when they’re separated with no regard to actual cultural differences.]

What did you eat growing up?
A lot of meat. French fries, but not frozen, always home made. My mother made hummus about twice a week. Arabic bread. Labneh for breakfast and in the evenings with olive oil and za’atar. Lebanese za’atar has a lot of citrus in it and it’s more sour. Lebanese pizza with white cheese or za’atar and oil, or a mix of tomatoes, onions, and fresh chili. We often eat hummus for breakfast. There’s also fava bean paste often served for breakfast, but that’s really hard on the stomach [laughs]. We eat a lot of rice as well.

What about sweets?
(Ooh.) There’s an Arabic sweet called kunafeh made with cheese, usually mozzarella, and coarse ground wheat. Then it’s usually baked and soaked in a sweet sugar syrup. We use the sugar syrup for every kind of sweet; it’s two parts sugar and one part water, and a little bit of rosewater or orange blossom water, and of course a little citrus. Baklava, but no one makes that from scratch at home. You can buy it everywhere and it’s always fresh. Kunafeh is a common breakfast food, served inside bread with more sugar syrup. During Ramadan there are more types of sweets and each one is better than the last. A lot of sweets are filled with dates but I don’t like them. (Graham asks about figs) I love figs! Only fresh figs – I eat dried here in Germany but only fresh in Lebanon. I’m so happy I’m visiting during fig season now [September]. There are figs in Lebanon that are white inside instead of red, honey figs, and they’re all kinds of delicious.

How can you compare the produce available in Germany to Lebanon?
There’s a much bigger assortment of vegetables here. There are of course some in Lebanon that you can’t get here, but generally nowadays you can find everything. For example, light green zucchini is more common in Lebanon, and I prefer the dark green ones in Germany because they’re a little sweeter. In Lebanon we never eat something sweet for lunch or dinner, it’s always salty, except for kunafeh which is eaten at any time of day. In Germany it’s normal to eat sweets as a main meal [for example noodles with apple sauce] but in Lebanon it’s not normal, only for desserts. German pickles are also very sweet [I agree] everything that’s pickled in Lebanon is salty with lots of vinegar. I’m used to German pickles now and switch back and forth between them and Lebanese pickles depending on what I’m eating. With hamburgers I’ll have German, but with hummus I have Lebanese pickles (Kristin says that she can’t have Lebanese pickles because they’re far too sour). About two weeks ago we sold falafel in the city we work in, and I had pickles as a side, and Kristin couldn’t eat them. I also make falafel myself, but no one does in Lebanon. It’s available everywhere. You can get a sandwich for 25 cents and it’s really good. They do it properly, always fresh, with fresh vegetables and tarator, a tahini based sauce.

How do you make your falafel?
I add a lot of cilantro, but never parsley – usually fresh herbs and sometimes frozen, but it’s better if it’s fresh. Chickpeas, fava beans – about 1 kilo chickpeas to 600g fava beans – garlic, onions, and cilantro. No lemon or tahini, other than in the sauce. The spices are a little cinnamon dried cilantro, a little nutmeg, and paprika. You can get a pre-made spice mix for falafel. I add baking powder, it’s really, really important, so they fluff up. If you don’t add it they won’t taste right and they’ll be too hard. I add a tablespoon and a half of baking powder for every kilo of falafel dough and deep-fry them. This makes over 100 falafel. (He laughs at me for baking my falafel.)

How much time do you spend cooking?
It depends. If I’m really stressed I’ll spend about three hours in the kitchen; it’s my way of coping with stress. More normally about an hour a day and I make most of our food myself. My wife cooks every now and then, but for her cooking is work, and for me it’s a hobby.

Do you like German food?
Hmm. [Laughs] I like asparagus but prefer green to white, especially when it’s really young. I’m learning to like white asparagus. My wife really likes it (she was born in Germany) so I’m trying to learn some new recipes for it. My wife likes German food, she’s almost German [laughs]. I like pizza and spaghetti, but true German food includes so much pork, and I don’t eat pork. I don’t eat German meat because it’s either pork or not halal. German sweets are excellent. I’ve tried some of the food Kristin has brought to work and liked it a lot – a pear cake and quiche, which was new for me, which was good. German cakes and breads are good. I don’t drink or eat non-halal meat and Kristin tells me I’m not integrated properly, but what can I do [laughs].

I may do more interviews in the future and actually put my anthropology degree to some use, we’ll see! This was a really fun one. Some of our conversation was in German but I’m pretty sure everything is translated correctly. That last comment from Khaled is something I think is really interesting in Germany – it’s all about full integration here, even with foods (as if anyone would choose German food over literally any other option) but it’s very different from the Canadian concept of a mosaic culture. Integration in this sense isn’t just for the far-right or the nazis in Germany- it’s expected by most people that immigrants should integrate fully and adopt German practices. This includes us, but I think like many other immigrants, we refuse, hah. I’m a German national but I often butt heads with my family over what’s expected of me as a German person because I don’t agree with a lot of it, and the cultural distances are much wider between people from countries that don’t have strong European backgrounds like Canada. I don’t think full ‘cultural integration’ is possible within one generation, if it’s possible at all (or necessary). People throw terms like this around but can’t define them in any case.

Okay, long post! Recipes are below with some extra tips from Khaled! By the way this hummus is pretty much the complete opposite of how I usually make it but it’s amazing.

If you make this Hummus or Baba Ghanoush or any other vegetarian dip recipes on Occasionally Eggs, please take a moment to rate the recipe and leave a comment below. It’s such a help to others who want to try the recipe. For more OE, follow along on Instagram, Facebook, and Pinterest, purchase the Occasionally Eggs cookbook, or subscribe for new posts via email.

Recipes and notes by Khaled Dbouk and shared with permission.

• He prefers to use a mortar and pestle, and like most things, it tastes better if made by hand instead of with a machine. I don’t have a mortar and pestle.
• Charring the eggplants over a flame is preferable to roasting them, and the vast majority of Lebanese homes have gas stoves, so it’s how baba ghanoush is made in Lebanon.
* Soak the chickpeas for 24 hours in water with a teaspoon of baking soda, and add baking soda to the cooking water as well, to ensure they’re very soft.
** Use the best tahini you can get as it significantly alters the flavour.
*** The ice keeps the hummus from heating as it blends and makes it creamier.
**** Cayenne isn’t traditional but a good addition nonetheless.
***** Yogurt lightens the colour and texture of the hummus. We didn’t include it but Khaled usually does.