September 9, 2020 by Alexandra Daum
A healthier vegan borscht, packed with winter vegetables and plenty of fresh dill. The veggies are shredded in a food processor to speed things up here.
Jump to Recipe 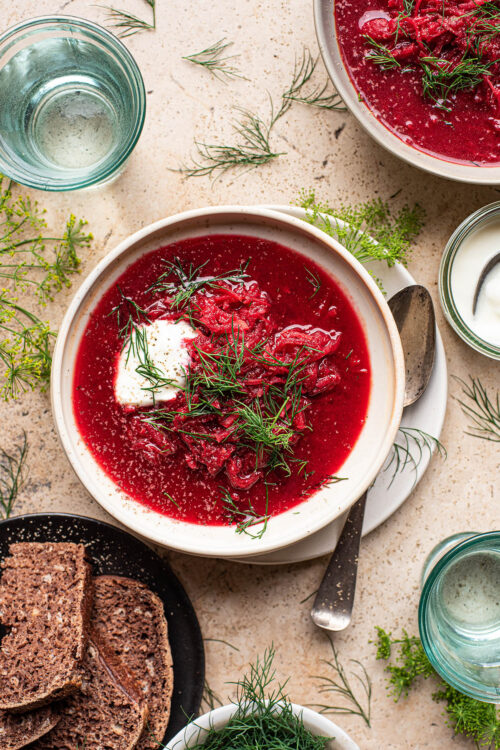 I grew up in a region of Canada that’s host to a lot of people with eastern European ancestry – Ukrainian, mostly, so there was always borscht and pierogi around. Though my dad’s family was also German speaking, we think they were probably from Prussia and so also carried these kinds of foods with them. (I don’t really know, and most of my food education was really German from my mom, with some Italian and Indian in the mix – immigrants make friends with immigrants, you know?)

Since beets, carrots, and potatoes are all stars of the harsh Manitoba gardening season, borscht, or red beet soup, was a mainstay. Not vegetarian then, but this plant based version is really excellent. I know beets are kind of love it or lump it, and if you really hate that earthy sweetness that beets have, this isn’t the recipe for you. Try my chocolate beet muffins instead.

It’s a lighter soup that works well anytime from autumn to spring, whenever you might see beets growing in gardens, but I think it’s best in autumn when the main crop potatoes are ready. New potatoes shouldn’t be shredded up into soup.

I typically serve this with sourdough rye bread to make a meal, but if you want something more protein-focused, try this wintery lentil borscht, which also features red cabbage. If you’ve never had borscht, it is a slightly sour soup and has a distinct earthy/sour flavour that isn’t for everyone – but if you like beets, you’ll love it.

Grate the vegetables using the grating attachment on a food processor or with the large side of a box grater. If using a processor, the garlic can be added with everything else. If not, mince the garlic instead.

Heat a large pot over medium heat and add the olive oil. Once the pot is hot, add all of the grated vegetables and cook, stirring occasionally, for a few minutes. You’ll see the veg starts to sweat and the volume will decrease. Don’t worry if it sticks a bit to the bottom of the pot, the stock will lift any of that when it’s added.

Once the vegetables have cooked down slightly, stir in the tomatoes, vegetable stock, salt, and pepper. Increase the heat to bring the soup to a rolling boil, then lower the heat and simmer for about 20 minutes, covered.

Check to make sure the vegetables are cooked through, then remove from the heat and add the mustard and dill. Taste and season as needed, then serve with extra dill and a spoonful of (vegan) yogurt.

I know mustard might seem like a strange thing to add. It plays a large role in my lentil potato stew, as well, and it’s a bit surprising but very tasty. Mustard is a bit hot and a bit sour, so it adds to the sharpness of the soup, while also adding a bit of kick.

If you have a food processor with a grating attachment, it makes very short work of the vegetables and I highly recommend it. Grating all of this by hand takes ages and increases the prep time significantly, but it’s certainly possible, and easier with extra hands if you have someone around to cook with.

Vinegar is optional depending on how sour you like your borscht. I always add it but Graham doesn’t like it so much. If you’re vegan, I suggest a plain mild yogurt like an oat or lupine based version. Coconut is a no-go.

As with any soup, I can’t stress enough how important it is to season to taste. Most of the time homemade soup is lacking salt and that’s all it needs. I write recipes to publish with less salt than I actually use to account for your tastes rather than mine – I generally use about double what’s written for savoury recipes. Season to taste.

The vegetables, apart from the beets, can be a bit flexible here. Add parsnips, or celeriac, cabbage, chard, whatever you like that’s in season. I like the heartiness the potatoes add but do often switch carrot for parsnip especially moving further into winter.

If you don’t have vegetable stock on hand, feel free to use water and season appropriately. It’s also possible to use dried dill, or even dill seed, but certainly use fresh if you can. Frozen or freeze dried are good options too.

An equal amount of fresh tomatoes can be subbed in for canned – my plants just don’t do well enough here to think of putting my hard-won garden tomatoes into a soup! If you’re in that transitional period between summer and autumn and have an abundance, though, it’s very nice to use fresh tomatoes here.

• This is a rough amount of vegetables needed because it’s not necessary to be specific in terms of grams – a little more or less doesn’t matter. Potatoes and onion should be roughly fist sized, carrots and beets about the same but often longer so it’s hard to tell.

This post was originally published in 2014. It has been updated with improvements to the recipe and text and new photos were added as of September 2020.