How to Make Vegetable Broth

September 30, 2020 by Alexandra Daum
This easy one-pot, flexible vegetable broth makes the most out of easy to find veggies! Ultra flavourful and delicious on its own, or as a base to your favourite soup, this is a great staple recipe.
Jump to Recipe 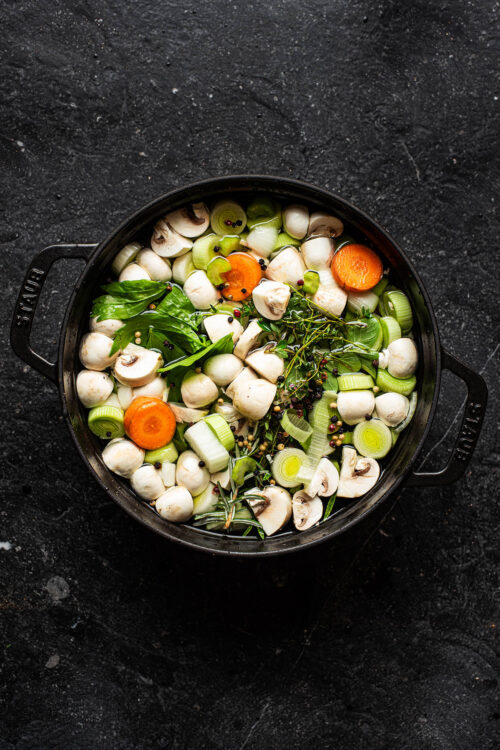 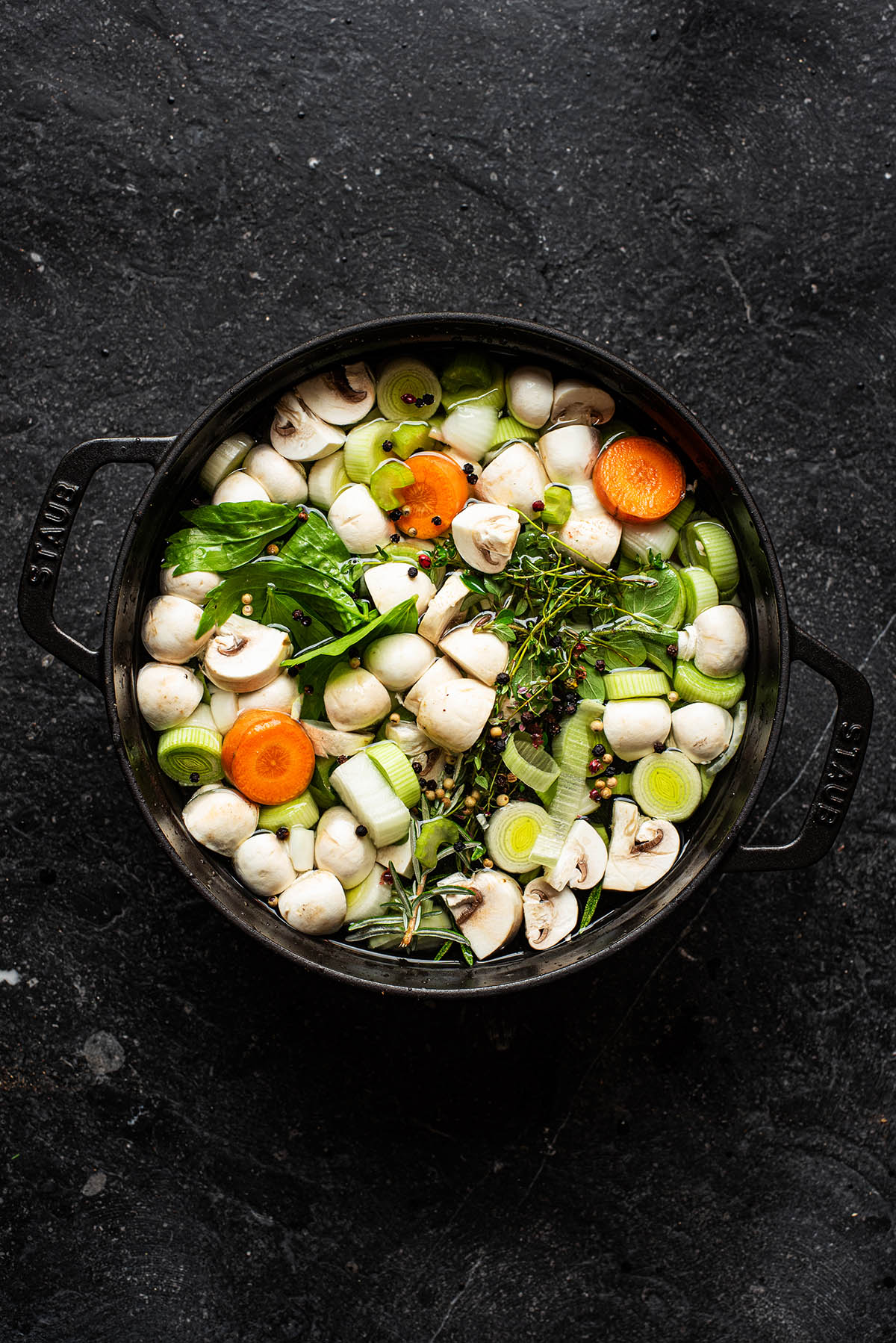 While I don’t always make broth from scratch, I’m always very pleased when I do. It tastes so much better and feels really good and healthy and wholesome, you know? But since living in the Netherlands with a tiny under-counter fridge/freezer, I’ve lacked some of the space needed for it.

This is a smaller batch of vegetable broth, just right for about two batches of soup. I’m sharing it in this way for people (like me) who don’t have the storage space for a really big pot of stock, but it can easily be doubled or more if you have a large freezer. This is the pot I use, it’s just under 4 litres (4 quarts) and the perfect size for us.

It’s the ideal time of year to make this broth – mushrooms, leeks, carrots, onions, and celery are all particularly good in early autumn! They’re available year round, of course, but a bit special at this time of year. I’ve used the herbs readily available in my garden, but there are a number of substitutions offered in that section of the post.

Making your own broth could hardly be simpler, really. You just wash and chop the vegetables, place everything into a big pot, add the water, and simmer for a couple of hours.

As you can see in the photos, I do a fairly rough chop. There’s no need to get everything to same size, or to mince the garlic or herbs, because it’s all going to be cooked down for ages anyway.

You will want to thoroughly clean vegetables that often collect sand in the base and any ridges, like the leeks and celery. Sand in broth is not very nice. There’s no need to de-string the celery, though.

Season based on how you’re going to use the broth. If I’m eating this as is, without turning it into a soup, I season to taste. If it’s being added to soup, I only add the tablespoon of salt and then season later on. This may still be too much salt for you if you’re sensitive to seasoning or trying to reduce your sodium; always go by your taste and preferences.

Though many people often call vegetable broth stock, that’s traditionally made with bones – and I’m not going to tout some magical healing properties of vegan bone broth here. It’s just a really good basic broth and made with wholesome, tasty veg.

Go ahead and toss the green part of the leek into the pot, as well as the ends of the carrots, herb stems, and mushroom stipes (the stalk/stem). They might as well be used, and won’t alter the flavour at all.

You can’t really use the vegetables after being cooked down into the broth (see the cooked picture for an idea of what they’ll look like – quite grungy by the end). I just add them to the compost heap and call it a day. All the good stuff has been cooked into your broth!

It’s very easy to add to this recipe. Try adding celeriac, parsnips, leaves and stems from brassicas, and greens like kale. None of these will significantly change the flavour of the broth, and can easily be popped in if you have some slightly wilted ones in your refrigerator to use up.

The only ingredient I’d say is easier to leave out is the leek, though even then I don’t really recommend it. You can make up for it with a little more onion, but the taste won’t be quite the same.

Change the herbs based on what you like and have on hand. I typically use rosemary, thyme, oregano, and lovage (which tastes like celery leaves) at this time of year. Parsley, cilantro, savoury, and others like lemongrass are all excellent as well, depending on what you’re going for.

I don’t recommend subbing dried herbs for this recipe. If you have to buy them, and want to keep costs low, then just use thyme – it packs the biggest punch with the smallest amount. I use a lot of herbs because I grow them, as they’re far to expensive to buy in any quantity.

There are also variations you can do, depending on what you’d like to use the broth for. Try adding some pieces of ginger or fresh turmeric, other spices (like cumin), seaweed, or some soya sauce. Just think about what you’re planning on using the broth for. The recipe as written is a solid base recipe that can be added to.

* Use the herbs you like and have on hand. See the post for more notes on herbs to use and other additions to the recipe.