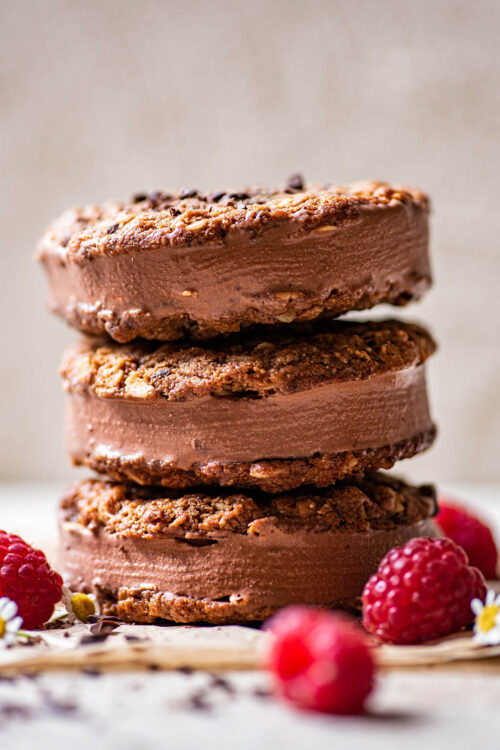 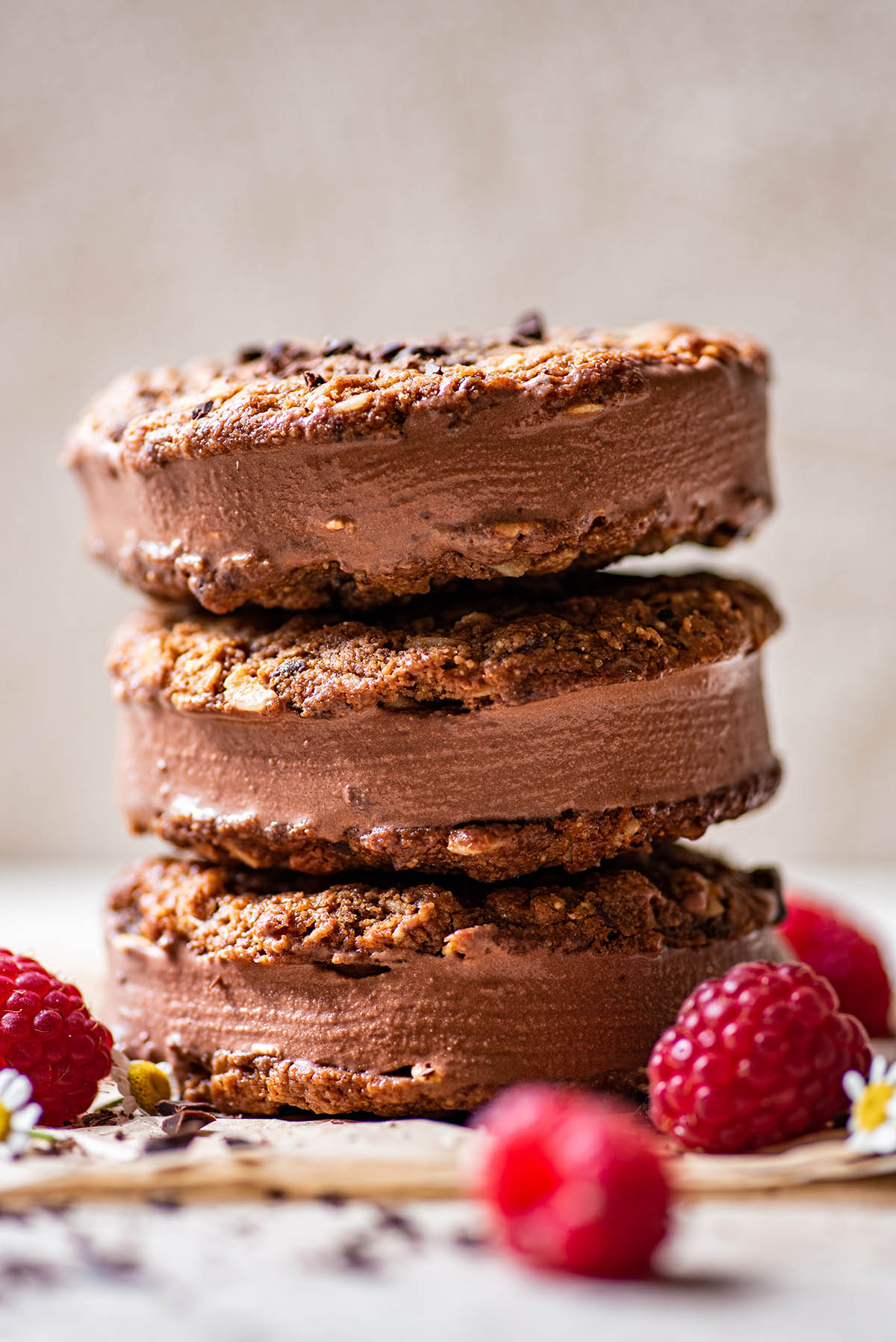 The smoothest, creamiest vegan chocolate ice cream! Coconut milk makes the best vegan ice cream – you don’t need any thickeners and I don’t find that there’s a huge difference between it and custard based ice creams. This is adapted from my toasted coconut ice cream and an idea that’s been in the back of my head for ages, to churn vegan chocolate ganache.

The result is a shockingly easy chocolate coconut milk ice cream, that’s refined sugar free (depends on how you look at that – there is still sugar in the form of date syrup). Whether you have an ice cream maker or not, it’s the best.

Sometimes I see 2/3/4 ingredient recipes and get grouchy because it’s actually using a box of cake mix and a tub of icing or something, but I do think of chocolate as one ingredient. If you would also like to be grouchy, then think of it as a 5-ingredient ice cream instead (cacao solids, cacao butter, sweetener in the chocolate).

This ice cream is extra good sandwiched between two of my vegan oatmeal cookies! Crisp but not hard when frozen, it’s really the perfect combination. That being said, it makes for a pretty huge ice cream sandwich so you might want to split it with someone. The cookies make ten, and there’s enough ice cream here for ten sandwiches plus a little extra.

Store bought vegan ice cream, while delicious, isn’t something I want to eat all summer long. Too much sugar and often a bit disappointing, it’s not worth to buy if you can make your own at home. This homemade vegan ice cream is:

1. Heat the milk: bring the coconut milk to a simmer, then pour over chopped chocolate.
2. Whisk to combine: whisk to mix the melted chocolate and the hot coconut milk.

3. Add the cream: this is the extra cream from the second can of milk. It’s added before the syrup because some heat is needed.
4. Add the date syrup: and whisk very well to combine. At this point also add any other flavourings like vanilla.
5. Cool it down: cool the mixture to room temperature before refrigerating to chill fully.
6. Churn: mix according to ice cream maker instructions, but don’t over-churn.

To Make the Ice Cream Sandwiches

Make sure you freeze your chocolate chunk oatmeal cookies ahead of time (the recipe recommends that they be frozen). Place a scoop of ice cream onto the inside of one cookie and use a spoon to spread it to cover the cookie. Place a second cookie over it, then press gently.

Use a spoon or butterknife to remove any excess ice cream from the outer edges, and to make sure it’s even between the two cookies. Repeat for the remaining cookies, and freeze immediately.

These can be enjoyed straight from the freezer, or left at room temperature for a few minutes before serving. If you know you want to make sandwiches with the cookies, do the ten minute baking time.

Using date syrup instead of cane sugar helps to prevent the ice cream from getting too hard after it’s been frozen solid. If you’d like, you can add a teaspoon or two of vanilla extract to the mix (the alcohol content helps a bit with scoop-ability).

I really, really recommend making these peanut butter oatmeal cookies for ice cream sandwiches. Even though the ice cream is great on its own and an excellent standalone recipe, it’s the best as a sandwich. The perfect combination!

How to Make it Without an Ice Cream Maker

If you don’t have an ice cream maker, you have a couple of options. Freeze the chocolate mixture in ice cube trays and then blend them in a high powered blender to break up the ice particles, then serve immediately or freeze again like regular ice cream.

Alternatively, you can place the bowl of chilled chocolate mixture into a large dish of ice and whisk until frozen to the consistency of soft serve. I recommend the first method, because the second one takes ages.

How to Store and Serve

Storage: once churned, freeze the ice cream in an airtight container for up to three months. It will freeze solid and be difficult to scoop. Having it frozen as ice cream sandwiches makes it easier to get one serving.

Serving: to scoop and serve, warm the container slightly by letting it sit out at room temperature for ten minutes. This will make it easier to scoop and will soften the ice cream again. Freeze again as usual.

If you make this Coconut Milk Ice Cream or any other vegetarian dessert recipes on Occasionally Eggs, please take a moment to rate the recipe and leave a comment below. It’s such a help to others who want to try the recipe. For more OE, follow along on Instagram, Facebook, and Pinterest, purchase the Occasionally Eggs cookbook, or subscribe for new posts via email.

*See above for instructions on how to make this without an ice cream maker.

This post was first shared in July 2020. It has been updated with more information as of August 2022 with no changes to the recipe.