August 4, 2020 by Alexandra Daum
This vegan toasted coconut ice cream is made with a base of creamy coconut milk, toasted coconut flakes, and chunks of dark chocolate. Refined sugar free, and no gums or starches needed.
Jump to Recipe 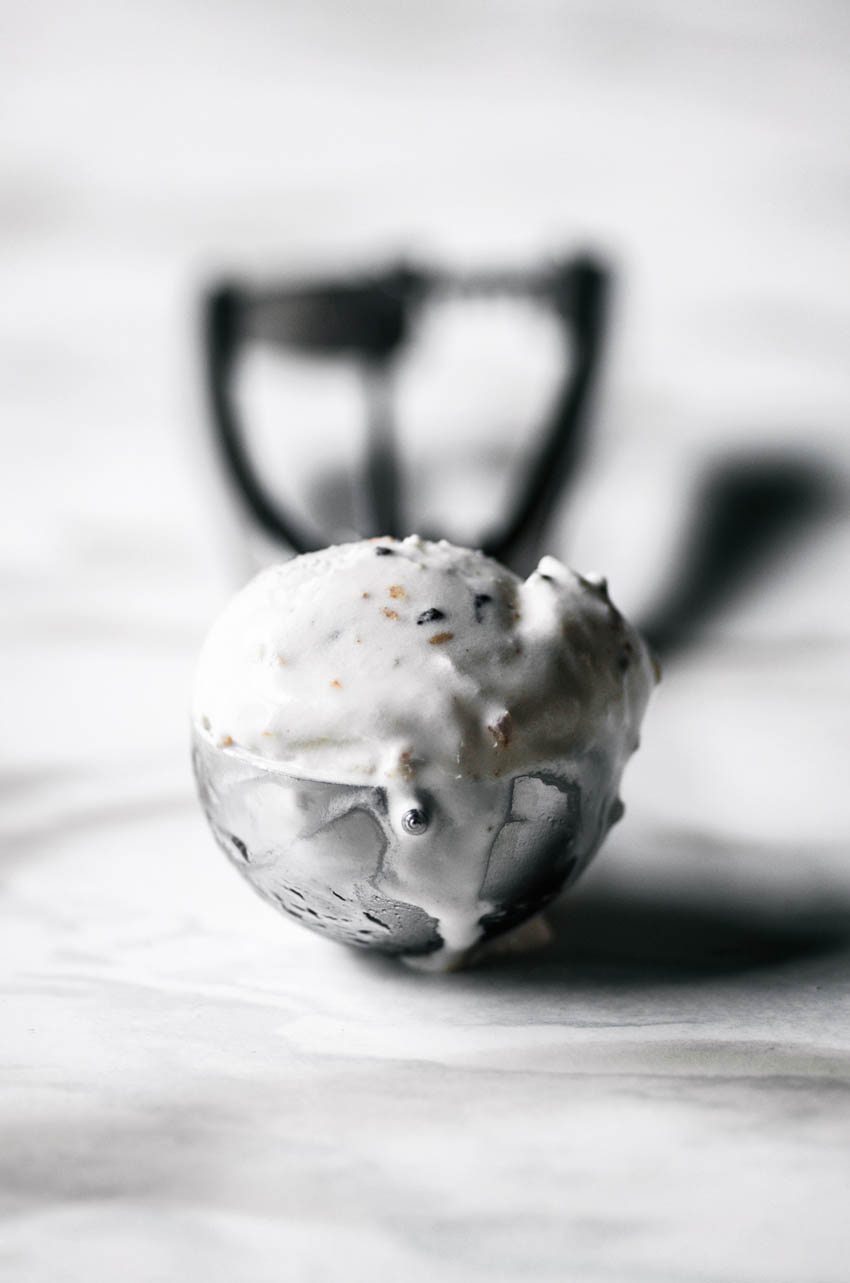 This post was originally published in August 2018. It has been updated with improvements to the text and recipe as of August 2020.

It’s inspired by an ice cream I had at Chaeban in Winnipeg, easily the best non-dairy ice cream I’ve ever bought. Usually any store bought ones are just pure sugar and I hate them, so homemade is great for keeping it from being too sweet. The one from Chaeban was pretty much perfect but it had gums added (because it’s being sold in containers) and definitely wasn’t cheap. I also don’t live in Winnipeg so there’s that to consider.

There’s no cooking involved here, so you can have dessert ready in just a few minutes! The base is just mixed together and poured right in to the machine, no need for cooking or chilling. Don’t have an ice cream maker? See below for tips of turning this into popsicles instead.

If you’re looking for something a little more chocolate-heavy, try this chocolate coconut milk ice cream instead.

Make sure your ice cream maker is properly frozen and ready to go before beginning. If it isn’t you can always refrigerate the coconut milk base mixture overnight while the ice cream maker freezes.

Whisk the coconut milk and cream, maple syrup, vanilla, and salt in a large bowl, preferably with a spout. Pour it into your prepared ice cream maker, and churn until it’s almost set and fully frozen.

When the base is almost done, add the chocolate and coconut flakes, allowing the machine to mix them in. Scoop the ice cream out of the machine and into a large container or parchment-lined bread tin, and freeze for up to a month.

You can serve the ice cream immediately after churning, but it will melt very quickly. I usually freeze it for at least half an hour before scooping and serving.

The type of coconut milk an cream you use is relatively important here, so use one that you’re familiar with. Don’t mistake coconut cream (which is just canned coconut milk, which a higher fat to water ratio) with creamed coconut, which comes in a box. The boxed stuff will result in a grainy, greasy ice cream.

If you can’t get coconut cream, just use the cream scooped from the top of a can of full-fat coconut milk. It’s the same thing. If your coconut milk/cream is a bit lumpy, blend it with an immersion or standing blender before adding it to your ice cream maker – the churning won’t remove lumps in the milk, you’ll just end up with lumpy ice cream.

Sometimes dark chocolate can get a bit waxy-feeling when it’s frozen, but there are a couple of ways around this. One is to use raw chocolate instead, as it freezes a bit softer. The other is to melt the chocolate, then pour it into the ice cream maker in a very slow stream while it’s churning to get a stracciatella style ice cream.

No substitutions for this recipe, other than what’s noted in the recipe card. It’s too minimal of a recipe for many changes.

If you don’t have an ice cream maker, you can make it into popsicles by stirring the add-ins into the base and pouring it into popsicle moulds. You may end up with some sinking of the coconut and chocolate, but it’s usually not too bad. Alternatively, freeze the base recipe in an ice cube tray, blend in a high speed blender, and then mix in the add-ins.

* You can substitute 1/2 teaspoon of vanilla powder for the extract, but the alcohol in the extract helps to keep it smooth and creamy.