July 7, 2020 by Alexandra Daum
This vegan mint chocolate chip ice cream is made with creamy coconut milk and no strange additives - just 7 healthy ingredients and sweetened with maple syrup.
Jump to Recipe 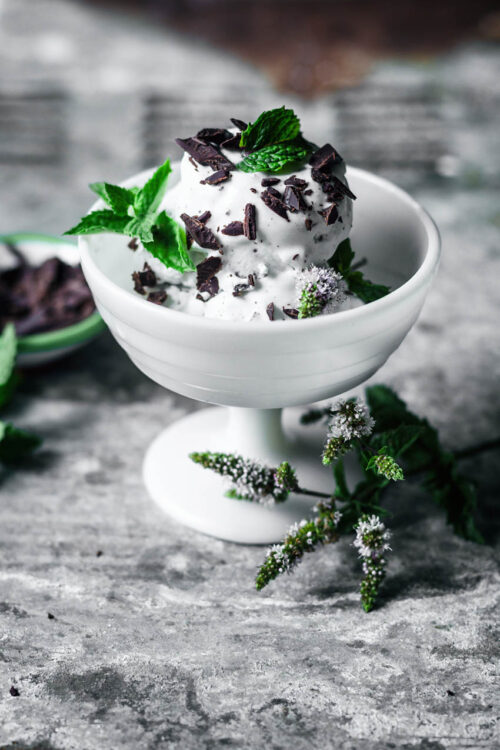 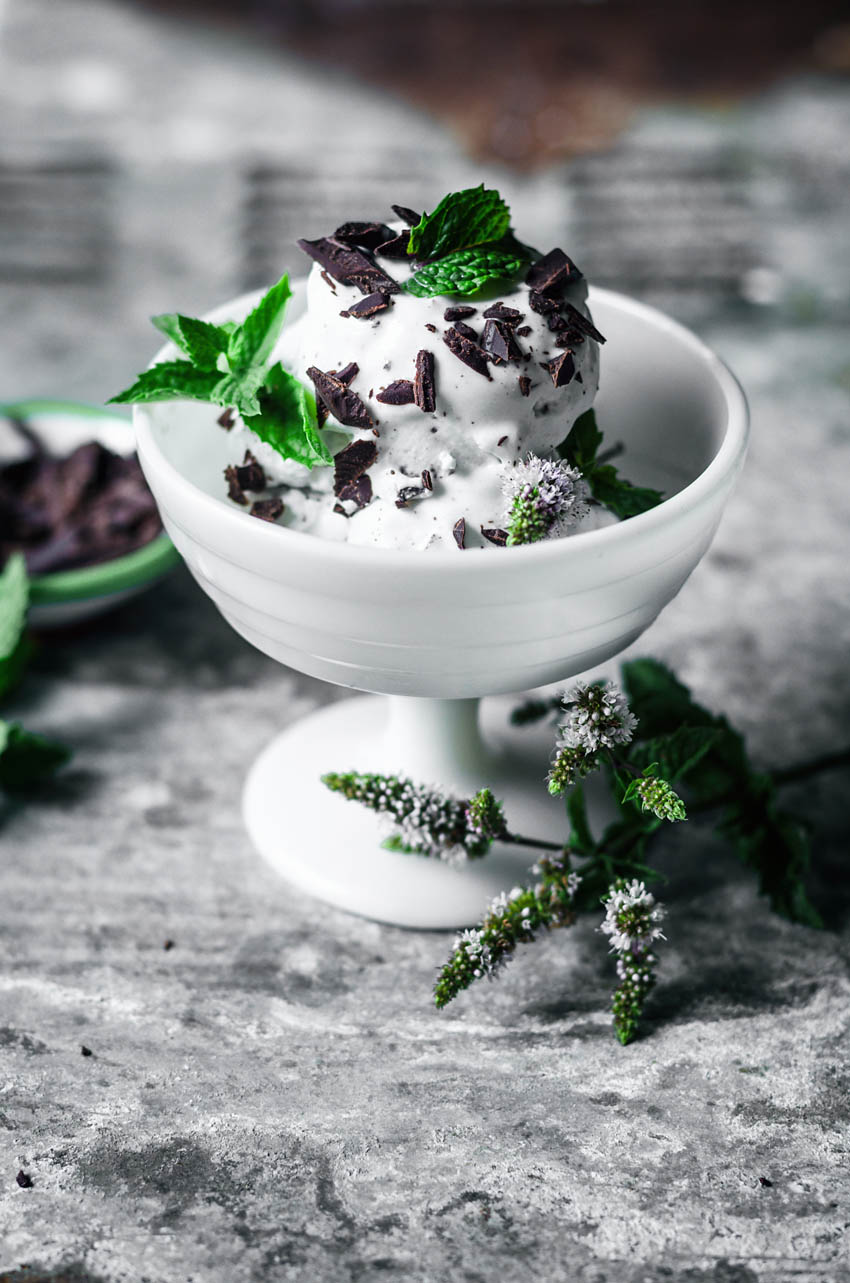 This base recipe with coconut milk is surprisingly simple, without any starches or gums to imitate eggs, and it’s just as creamy as its dairy counterpart. There are some great store-bought options for vegan ice cream these days, but they’re either way too high in sugar for my taste, or made with ingredients you don’t really want to eat. This recipe uses just 7 ingredients including the salt and vanilla.

I only started to eat mint chip ice cream a few years ago and never liked it when I was a kid – and I can tell you, with two years of experience working in an ice cream shop as a teenager, it’s not a child favourite. Now it’s right up there in my top five, though, and especially with this recipe (no green food colouring, please).

A scoop of vegan mint chocolate chip ice cream is easily the best way to beat the summer heat, with some nice cooling mint and creamy coconut milk. If you’re not a big coconut fan, this is perfect for you, because the mint flavour effectively covers that little hint of coconut.

Serve it immediately – right out of the ice cream maker and it’ll melt quickly – or freeze fully in a sealed container. To serve from the freezer, thaw it for 10-15 minutes at room temperature first. See below for notes on making the ice cream without an ice cream maker.

This toasted coconut ice cream follows the same method – no eggs, no cooking, just churning and minimal ingredients. Maybe you’ve seen no-churn ice creams made with whipped cream and condensed milk – this follows in that line, but using coconut cream instead.

If you don’t have an ice cream maker, try this: freeze the base ice cream, not including the chocolate chunks, in a container or ice cube tray. Break it into pieces and then blend it up in a high powered blender or food processor, then mix in the chocolate and serve.

Easy peasy and no single-use equipment needed. I know you’re supposed to be able to freeze it in a tray and use a fork to break up the crystals as it freezes, but that’s never worked very well for me. Alternatively, freeze the mixture in popsicle moulds.

About the chocolate – depending on the type, it can be a little waxy when frozen. If you really hate that, I suggest using raw chocolate instead as it tends to freeze a little better. And make sure you get some big chunks in there!

I’ve chosen organic mint extract here because fresh mint leaves can add a lot of bitterness (more on that below). If you want to brave turning on the oven, try this ice cream with some chocolate snack cake and go crazy.

If you can’t get coconut cream, use the cream scooped from the top of a can of coconut milk instead. You might prefer to use fresh mint instead of mint extract – as I mentioned above, fresh can be quite bitter.

To use garden mint, go for spearmint instead of peppermint as it’s a bit sweeter. Chop it as finely as you possibly can, making it into a kind of paste, before mixing it in. Use about a tablespoon of fresh mint.

As usual, maple syrup and honey are used interchangeably. I get a lot of comments and messages about this. If you’re making this for someone who follows a vegan diet, be sure to use the maple syrup option.

• To make this without an ice cream maker, freeze the base mixture in a container or ice cube tray. Break into pieces, then blend in a high speed blender or food processor until smooth. Mix in the chocolate chunks and serve immediately.
* Include the water with the cream in the coconut milk.
* If you can’t get coconut cream in a can, use cream scooped from the top of a can of full-fat coconut milk instead.

This recipe was originally published in August 2018. It has been updated with improvements and clarifications to the text and recipe as of July 2020.