September 7, 2022 by Alexandra Daum
Sugar free and vegan puffed quinoa bars made with raw cacao, dates, and nut butter. These no bake snacks are a healthier gluten free riff on a prairie classic, puffed wheat squares.
Jump to Recipe 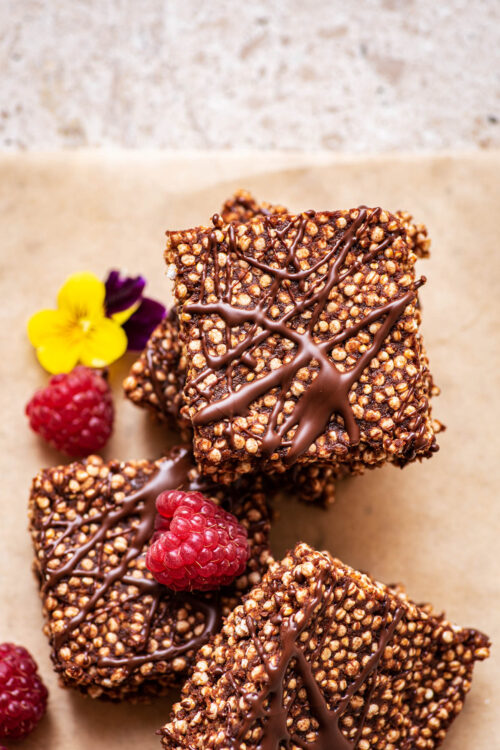 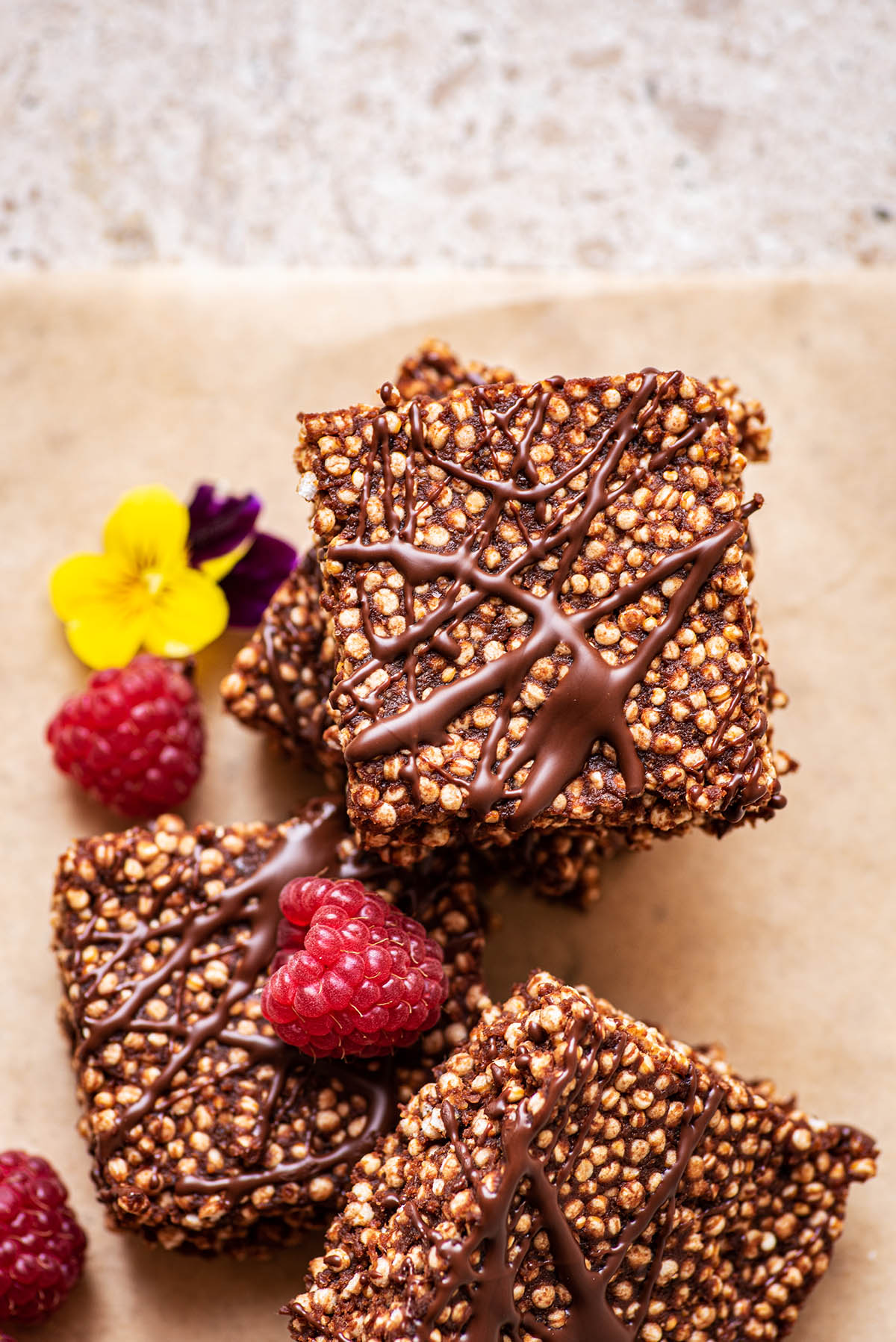 Bringing a prairie classic, puffed wheat squares, over to the healthy-ish plant based world with some chocolate puffed quinoa snack bars. You know what? I love them even more than the corn syrup laden version I grew up (obsessively) eating.

This version is sugar free, made with whole dates to hold everything together and adding that delicious caramel flavour. Using puffed quinoa makes these gluten free, and they’re oil free to boot.

The bars take about five minutes to make, then half an hour in the freezer before they’re ready, but still, no bake and so simple. Try storing them in the freezer for a chewy chocolate bar. So good.

If you like rice crispy squares, you’ll like these puffed quinoa bars. They’re not super crisp but have the same kind of idea behind them – definitely on the softer side, but so is puffed quinoa to start with. If you have had puffed wheat squares, they’re pretty spot on. If you want a really crisp bar I’m afraid this isn’t that, as the dates do create more of a chewy treat.

Just sweet enough, chocolate-y, and chewy, these are one of my favourite healthy-ish desserts and I make them any time puffed quinoa is on sale. They’re so easy and so good.

1. Blend: mix the dates and nut butter to form a rough paste. Don’t add the milk yet!
2. Mix remaining ingredients: blend the milk, cocoa, and spices to make a smooth paste. Adding the milk later prevents an explosion from the date pieces moving too much.

3. Mix with quinoa: combine the date paste and the puffed quinoa and mix very well.
4. Press into a tin: firmly press the mixture into a lined tin and chill before slicing.

You can find puffed quinoa online and in most health food stores. It’s also often available in the GF section, or with the baking supplies, in grocery stores.

If you have a high powered blender, you can blend the date mixture instead. In that case, all of the ingredients (minus the quinoa) can be added at once rather than working in two steps as with the food processor.

No blender or processor? That’s okay! You can mash the dates by hand before mixing in the other ingredients with a fork. If your dates aren’t completely soft, simply soak them in hot water for an hour before beginning.

The tin size doesn’t really matter because the bars aren’t baked – you can press the mixture into just about any form you have on hand and then slice into bars the size you’d like. A bread tin works a treat.

Storage: if you prefer the bars quite soft, they can be stored in a sealed container in the refrigerator for at least three days.

Freezing: these are best frozen. Keep an an airtight container in the freezer for up to three months and eat from frozen.

If you make these Chocolate Puffed Quinoa Bars or any other snack recipes on Occasionally Eggs, please take a moment to rate the recipe and leave a comment below. It’s such a help to others who want to try the recipe. For more OE, follow along on Instagram, Facebook, and Pinterest, purchase the Occasionally Eggs cookbook, or subscribe for new posts via email.