November 7, 2016 by Alexandra Daum
This vegan cinnamon bun cake is sweetened with apple and hazelnut flour to reduce the amount of (coconut) sugar used, and it's moist, sweet, and all about autumn. Save this for a chilly weekend baking project and prepare to be cosy.
Jump to Recipe 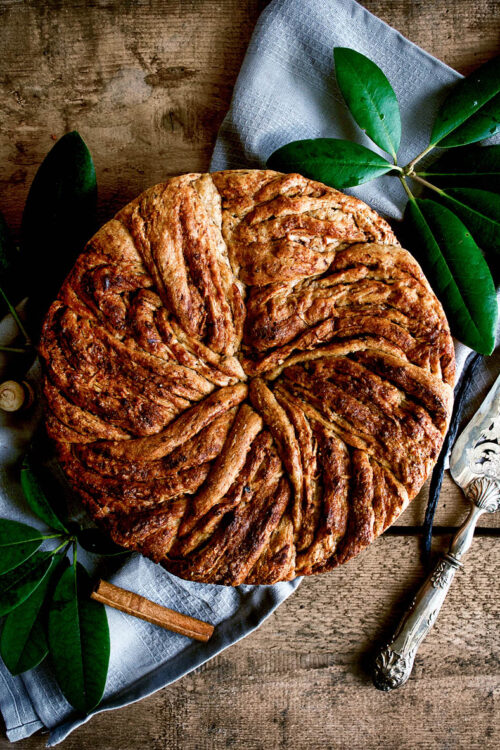 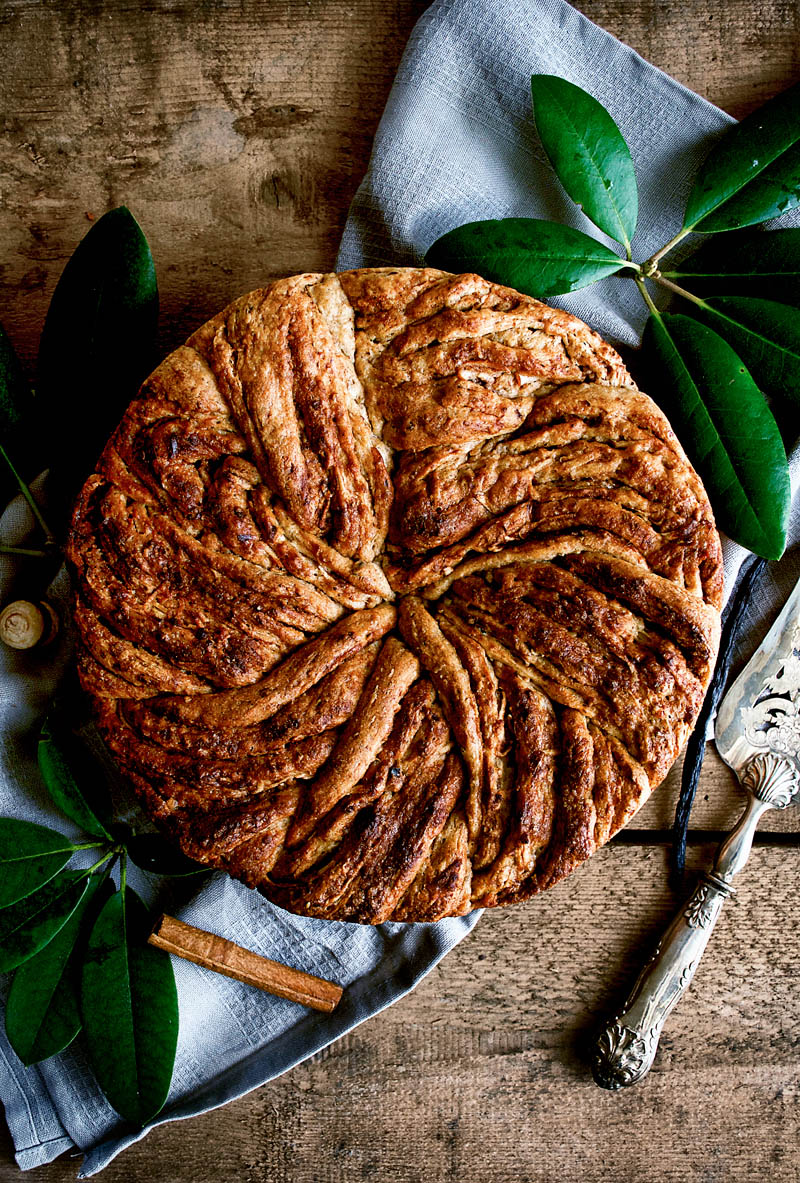 I had plans to make apple cinnamon buns. Those plans changed into an apple cinnamon wreath bread, like this one, but we only have one baking sheet right now and it was in use. I put the bread in a springform pan instead because it’s my only other oven-safe thing in the kitchen right now (we just moved again) and it morphed from a wreath into a cinnamon bun cake.

I’m okay with that. It turned out to be one of the prettiest things I’ve made, and a cake made out of cinnamon buns is just about the best thing ever. Christmas breakfast, birthday cake, impress your in-laws coffee cake, or just because, this is a double duty breakfast dessert kind of treat.

This is another example of my bread obsession. It is the world’s coziest food and I love everything about it. Bread making is the most amazing thing – like all kitchen science (baking) it’s so much fun to see it transform from simple ingredients into something nourishing and beautiful, and you’re the one who made that happen! You are magical.

If it’s a little chilly in your part of the world, or not that cold but it won’t stop raining, bake up a cinnamon bun cake, grab a blanket, and get snug. This recipe is not crazy sweet, with just a little maple syrup as a sweetener. You’re using some ground hazelnut and grated apple for extra sweetness and to keep things from drying out, so less sugar and oil are needed.

If you want cinnamon buns instead, you can roll the bread up according to the instructions, but slice it into buns instead and bake them in a baking pan. Check out the recipe for my pumpkin cinnamon buns if you’re looking for another seasonal baking project, or make both! Sneak some vegetables into those treats.

If you like the idea of making bread but don’t think you’re quite ready for kneading/rolling/braiding, try this no-knead easy rye bread – I promise anyone can make it and it’s a great introduction to bread making. But remember that you are an amazing kitchen scientist.

By the way, I recently discovered that commenting on posts with an iPhone doesn’t work for some reason. I will eventually switch over to wordpress, which should hopefully fix these little glitches, but not quite yet. Unfortunately for the time being if you’d like to leave a comment, it works for every other type of device (as far as I know) just not for iPhones – but as always, if you have a question, suggestion, or just want to say hi, you can email me at alexandra[at]occasionallyeggs.com. I’d love to hear from you!

If you make this Apple Cinnamon Bun or any other ancient grain bread recipes on Occasionally Eggs, please take a moment to rate the recipe and leave a comment below. It’s such a help to others who want to try the recipe. For more OE, follow along on Instagram, Facebook, and Pinterest, purchase the Occasionally Eggs cookbook, or subscribe for new posts via email.

• The dough will be soft. Take the sides off the springform and place the dough on the base part of the pan, then put the sides back on, instead of trying to lift the dough into the pan.
• If you don’t have a springform pan, try baking the dough in a bundt pan, but place the dough filling side down (so that when you flip the pan, it will be facing up).
• If you’re worried about the rolled dough sticking to your counter, roll the dough out on parchment paper instead.
* If you have a stand mixer, go up to 2 1/2 cups flour and use your kneading attachment to knead the bread for you. Add flour 1/4 cup at a time, continuing to knead, until you have a soft dough that’s no longer sticky. Knead for about five minutes, but try to avoid over kneading, as spelt is a little more sensitive than regular flour.