October 20, 2019 by Alexandra Daum
These vegan pumpkin cinnamon buns are a perfect fall dessert, and just the thing for a weekend project as the weather starts to cool down. Total comfort food, made healthy(ish).
Jump to Recipe 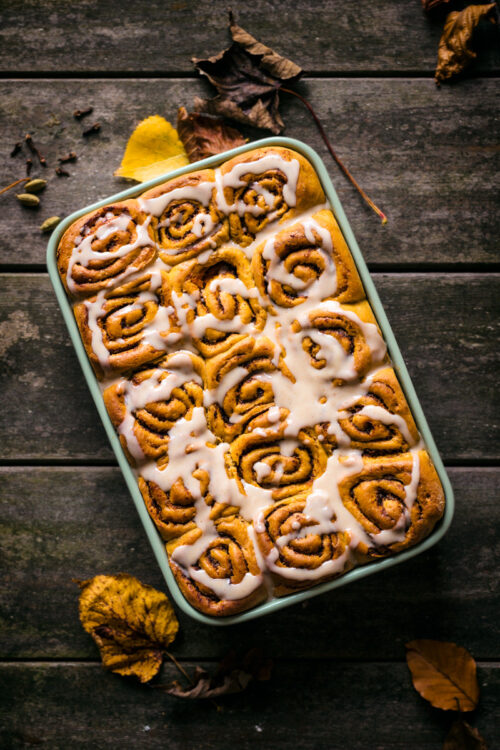 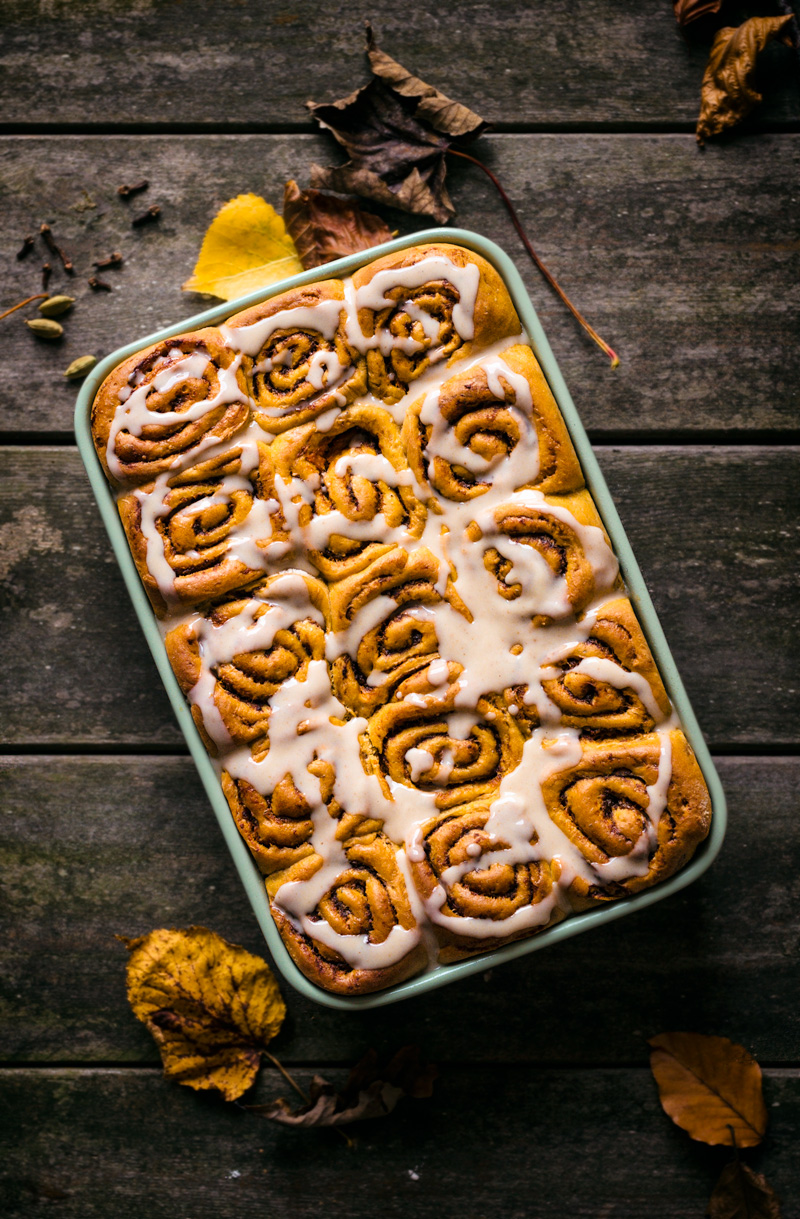 This post was originally published in October 2015. It has been updated with changes to improve the recipe and photographs.

Every autumn, I make a few batches of these healthy-ish vegan pumpkin cinnamon rolls. They’re sweet without being cloying, since pumpkin adds most of the sweetness, and the most beautiful warm orange colour. They’re fall in a bun.

Cinnamon buns are an autumn staple in any case, and you know I’m all about (sweet) bread – but adding some pumpkin puree really takes it over the top. You can make them with pumpkin spice or pure cinnamon, your choice. Just make them before the season is over!

If you’re looking for a nice Thanksgiving breakfast idea, or something to add to a holiday brunch table, these are it. As far as homemade bread goes, they’re about as easy as it gets.

Made with spelt flour, coconut oil, maple syrup, and coconut sugar, they’re a less overloaded version of cinnamon rolls. The original recipe had more sugar and oil but I’ve cut it down in the updated version here.

How to make pumpkin cinnamon rolls

First things first, roast some pumpkin for puree if you’re making your own. It’s super simple to make if you have an excess of pumpkins, but you can also use canned – make sure it’s only puree and not pumpkin pie filling, which has a bunch of other stuff added.

To make the dough, the nondairy milk (oat, almond, cashew) is heated with the pumpkin puree, coconut oil, and maple syrup until just warm to the touch. If it gets too hot, no worries, just let it cool in the bowl for a while before adding the yeast.

Whisk the yeast into the warm – not hot – milk mixture and let it rest for 15 minutes. Everything should be very foamy and exciting after 15, and if not, you either need new yeast or the mix was too hot and killed it. (If you’re not sure your yeast is good anymore, mix a tiny bit with warm water before making the dough to make sure – and store your yeast in the fridge to keep it alive longer.)

Mix some of the flour into the bowl, along with the cinnamon and salt, then keep adding flour until it becomes too stiff to mix with a wooden spoon. Turn it out onto a clean surface and knead, baby. Keep adding flour bit by bit while you knead, until you get a soft, smooth dough. If it’s sticking to your fingers, keep going.

Let it rise in a warm spot for an hour, then roll it out, add the filling, cut into rolls, and place them into a greased baking dish. Rise again for half an hour, bake, and serve! That’s it.

All flours are a bit different, so I give a range for the amount of flour needed. That’s also why it’s added incrementally instead of dumping everything in at once and mixing away.

If you want to use a standing mixer, all of the instructions are the same, but the mixer will do the kneading for you.

As always, all purpose flour can be subbed in for the light spelt without any problems. You can also mix in some whole grain flour, like whole spelt, whole wheat, einkorn, or kamut to make these a bit healthier. I wouldn’t go over about 1/4 whole grain for this recipe.

Mashed roasted sweet potato can be used in place of pumpkin puree. It has a lower liquid content, so you’ll likely use a bit less flour when kneading, but the taste is good.

Use any spices you prefer. I love nutmeg but hate star anise, and often make these only with cinnamon instead of a spice blend. The recipe as posted uses cinnamon, nutmeg, cardamom, and fresh ginger, and that’s my preferred blend. Alternatively, you can make your own pumpkin pie spice and use that.

Can I make them ahead of time?

Yes! To make these rolls ahead of time, you have a couple of options.

Option one: make the dough the night before, let it go through the first rise, and form the buns. Place them into the baking dish and cover well, then let them rise again in the refrigerator overnight. Let the rolls sit on the counter until they come back to room temperature before baking the following day.

Option two: because of the high quantity of pumpkin in these, you can easily bake them a day ahead and they’ll be excellent on day two after baking. Just pop them in the oven for a few minutes, covered, to heat up again before serving.

The glaze is easy peasy – just some coconut cream from a can of full-fat coconut milk, a bit of maple syrup, lemon juice, and cinnamon. Whisk it up until slightly thickened and you’re ready to go. It’s delicious and so simple.

Because it’s made with a base of coconut milk, it’s runny at room temperature and more solid – a bit like whipped cream – when refrigerated. Either way, excellent.

If you want something a bit more like a dairy-free cream cheese frosting (without the weird vegan cream cheese) try my vegan labneh instead. Sweeten it with some extra maple syrup or honey and it’s just like frosting! It’s also made with a base of coconut yogurt.

• For the filling, you can also use three teaspoons of pumpkin pie spice in place of all of the spices.