June 30, 2020 by Alexandra Daum
This high protein blueberry peanut butter smoothie makes the best use of seasonal blueberries for a beautiful jewel toned breakfast or snack. Just two minutes and a handful of ingredients.
Jump to Recipe 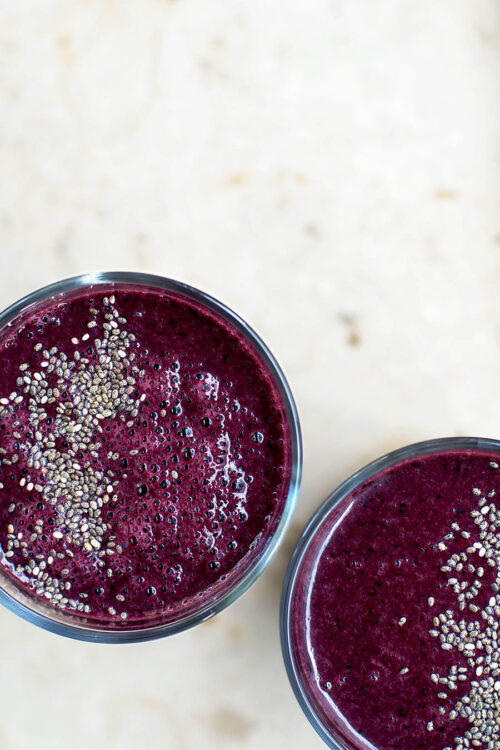 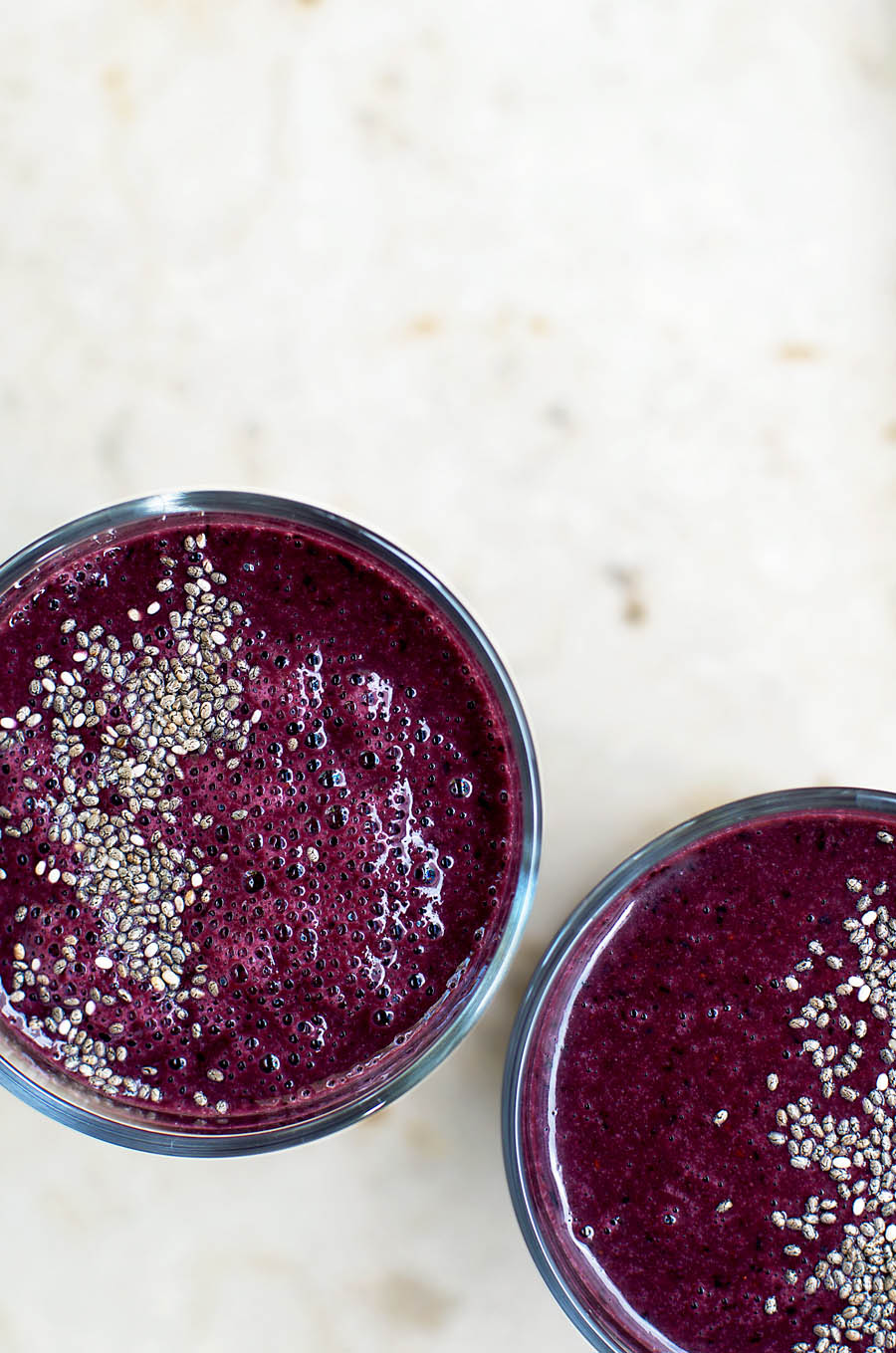 This post was originally published in August 2017. It has been updated as of June 2020 with improvements to the text and recipe.

It’s berry season, folks. Graham and I start picking wild blueberries (bilberries) around the beginning of July, if we’re in a place where they grow. He wants me to tell you that he found the wild blueberries in a nearby bog and that they’re much better than farmed blueberries (they are, and he did).

Around this time of year, wild berries are abundant in northern Europe. In the Netherlands, unfortunately, there’s virtually no wild spaces so they’re harder to find. When we lived in Germany, though, mid- to late-summer was for berries, especially wild blueberries and blackberries.

Okay, you probably don’t need a method section for a pretty basic blueberry peanut butter smoothie. But! There are a couple of things to note. If your blender isn’t up to blending dates, either don’t add them, or use a bit of maple syrup or honey instead.

If you’re using frozen banana and fresh blueberries, you may want to break or cut the banana into pieces (ideally before freezing!) if your blender isn’t super-powered. It’ll mix a lot easier. Otherwise, just add everything to a container and blend until very smooth. If there are any lumps, blend a little longer.

To serve with chia, I like to add the seeds after the smoothie is blended and poured into glasses. Otherwise chia seeds get stuck in all the nooks and crannies in the blades of the mixer. This is optional, but how the smoothies are pictured, and adds a little extra fibre, protein, and healthy fats.

It’s always good to take precautions if you’re gathering any wild foods. The wild blueberries that we pick grow on low-lying bushes, well within the range of dogs and other animals, so be cautious in where you’re collecting them from. Avoid any bushes that seem to be burned – this is often a sign of urine contact (or something like a chemical spray, also to be avoided).

Never gather foods from beside busy roadsides or near commercial fields. Depending on where you are, it may or may not be legal to gather, so check into that first. In northern Germany wild blueberries can be found in the moor, in Sweden in most wooded areas, and I don’t know about anywhere else.

And if you’re not 100% sure, absolutely positive, that what you’re picking is edible, don’t pick it, and certainly don’t try it to see. Putting something in your mouth is not a good way to test whether it’s poisonous or not (as Graham has often done). It is possible to buy wild blueberries, and cultivated are great too.

Blackberries, raspberries, and strawberries are all great choices, so use what you have on hand. Peanut butter adds protein and even though it’s a minimal number of ingredients, it’s a great combination with the blueberries.

I don’t have a fancy high powered blender – just an immersion blender – and just about anything will work for this recipe. It’s not a green smoothie, you’re not blending anything tricky, so it should get pretty smooth no matter what.

If you’re using fresh berries, make sure to freeze the banana instead. One of the elements needs to be frozen or the smoothie will be too thin. Despite the talk above about gathering berries, store bought frozen berries work just as well!

• This makes a really great chia pudding. Just stir in 50g (1/4 cup) chia seeds, mix, and let it set in the fridge for at least two hours before serving.