May 15, 2020 by Alexandra Daum
This simple cauliflower tikka masala features cauliflower in a creamy coconut-milk based gravy for an easy vegan main dish. With chickpeas to help round things out and plenty of spice.
Jump to Recipe 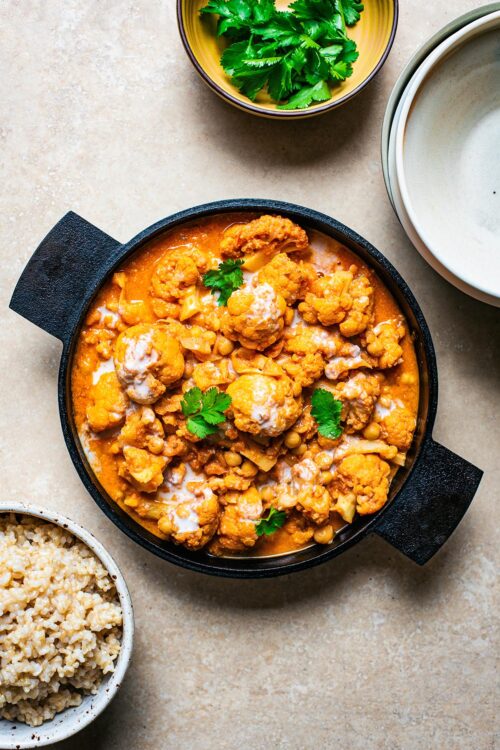 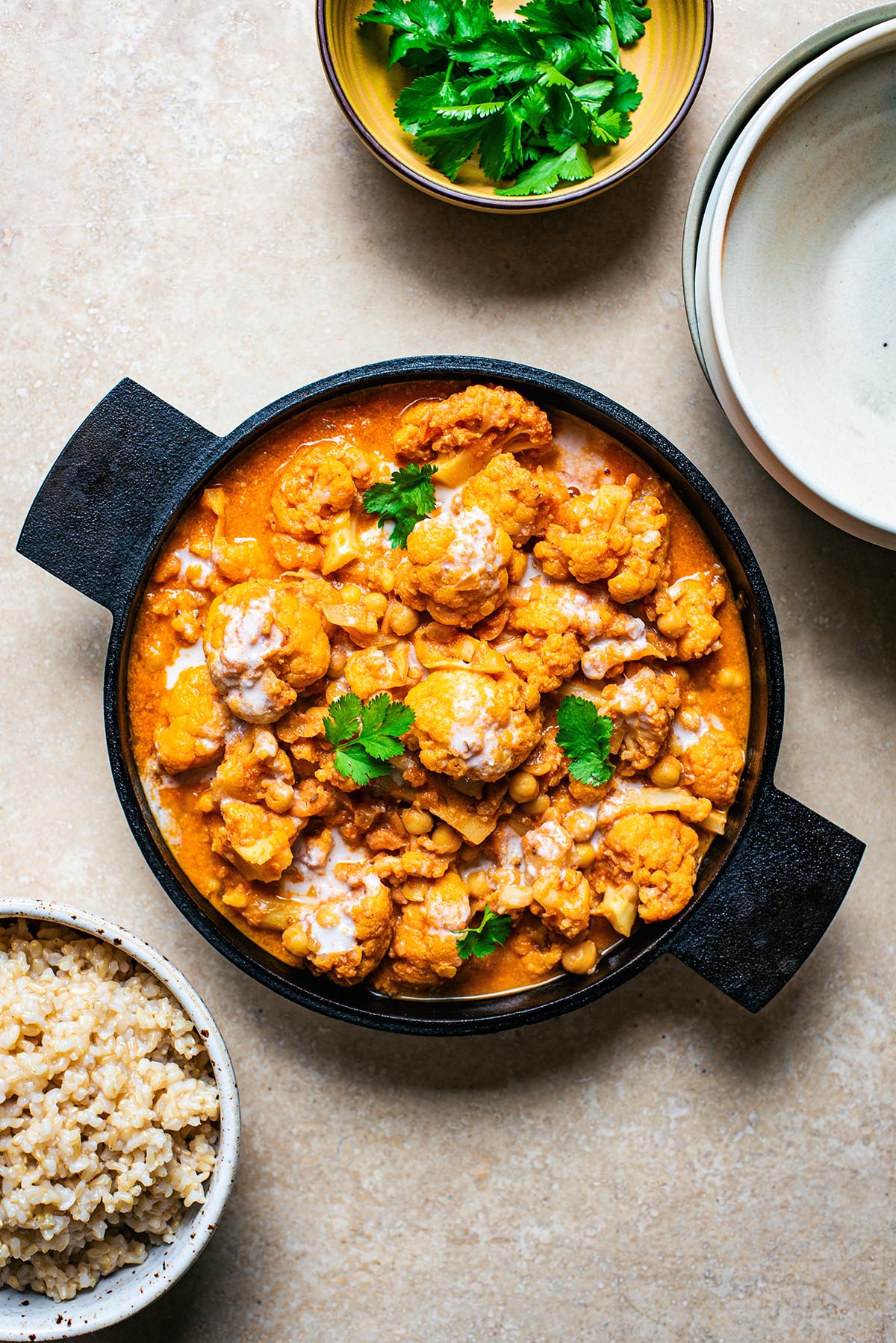 Tikka masala is one of the UK’s most popular dishes, both for cooking at home and takeout. No one’s quite sure where it comes from and there are a pile of explanations, but it’s definitely not an ancient dish. Usually made with chicken, it’s a spicy (masala, obviously) curry-style gravy and it’s excellent vegan, too.

Cauliflower tikka masala is an obvious riff on the classic chicken recipe, because cauliflower is the do-all vegetable. Great texture and it takes on any flavour you throw at it. And since we don’t eat tofu around here, cauliflower saves the day!

Seriously though, cauliflower tacos, cauliflower steaks, cauliflower potato soup. It’s good in everything and 100% the plant based version of chicken for when you’re not sure what to have for dinner. It also has a surprisingly long season, with different varieties growing well into winter, though it’s generally best in spring and early autumn.

You need about half an hour for this, or just the time it takes to cook the cauliflower. All the spices make for excellent flavour without a long cooking time. A good passata (crushed tomatoes) will make a big difference here with the short cook, so use one that you like the taste of. Just don’t mix it up with tomato paste.

This might seem like a long list but it’s mostly dry spices! Other than the cauliflower, which can be from frozen, all of the other ingredients are pantry items.

Unlike most of my curries, soups, and stews, the main vegetables aren’t sautéed with the spices before adding liquids. The cauliflower is added after the spices and just mixed right before adding the tomatoes.

So you cook the onions, then fry up the ginger, garlic, and spices, pop the cauliflower in to coat, and go in with the passata. Add the chickpeas and simmer away until the cauliflower is tender (25-30 minutes). Add the coconut milk, season to taste, and serve. Minimal chopping, minimal effort, and a great curry.

Tikka masala is meant to be a spicy dish. I’ve toned it down a bit here with 1/2 teaspoon of cayenne pepper, but your garam masala probably includes something hot too. Reduce the cayenne if you have a hard time with spice, or increase it if you love the burn.

The recipe calls for only the cream from a can of coconut milk. If you find you need to thin the curry a bit, you can use the water from the coconut milk instead of tap water.

I’ve chosen to serve with brown rice for the pictures. It’s a good fit because brown rice takes about 40 minutes to cook, so if you start it just before you start on the tikka masala, they’ll both be done right around the same time. If you prefer it, naan is a great fit too.

Coconut sugar or honey are important to add to this recipe – usually I’d use less than a full teaspoon for other recipes, but there is quite a bit of sweetness in a tikka masala. It is key so please don’t leave it out. You can use cane sugar or maple syrup or whatever you prefer, just add a sweetener.

If you don’t have garam masala, you can use the following blend: 1/2 teaspoon each cardamom, cinnamon, cloves, and coriander. Since the other usual additions to a garam masala are included in the recipe anyway, you don’t need to add extra but you can up the cumin and cayenne slightly if you like.

Beyond the spices, it’s a very minimal recipe and there’s not really a substitute for cauliflower (in this cauliflower tikka masala) but you could add more vegetables! Green peas are great added right at the end of cooking time, and so are any greens. You can do sweet potato too but then you’re really heading more toward a cauliflower sweet potato curry anyway. It’s meant to be pretty basic.

I haven’t tried this since I don’t think I’ve ever even seen frozen cauliflower to buy here, but I’m 99% sure you can use frozen instead of fresh if you like. Add it at the same time, right from frozen, and the cooking time should be the same or even slightly less.

If you’re not averse to dairy, you can sub heavy cream for the coconut milk and use butter for the oil. I haven’t tested this, obviously, but I don’t see why it’d be a problem.

* If you don’t like the spiciness of ginger so much and find that mincing it is a bit much, finely grate it with a microplane instead. ** The amount of cream from a can of coconut milk varies from brand to brand, but it’s slight enough that it won’t make a difference for this recipe. Just make sure you’re choosing one with a high fat content, minimum 60% coconut to water. Alternatively, you can use a cup of coconut cream.