October 15, 2020 by Alexandra Daum
Vegan cauliflower tacos filled with winter vegetables like chard and pickled red onions. Refried beans make up the base here and you won't miss the summery toppings usually served with tacos for this cold weather version.
Jump to Recipe 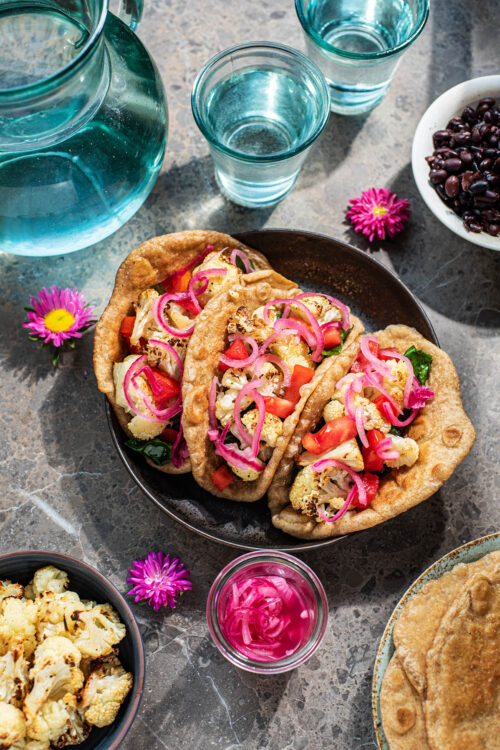 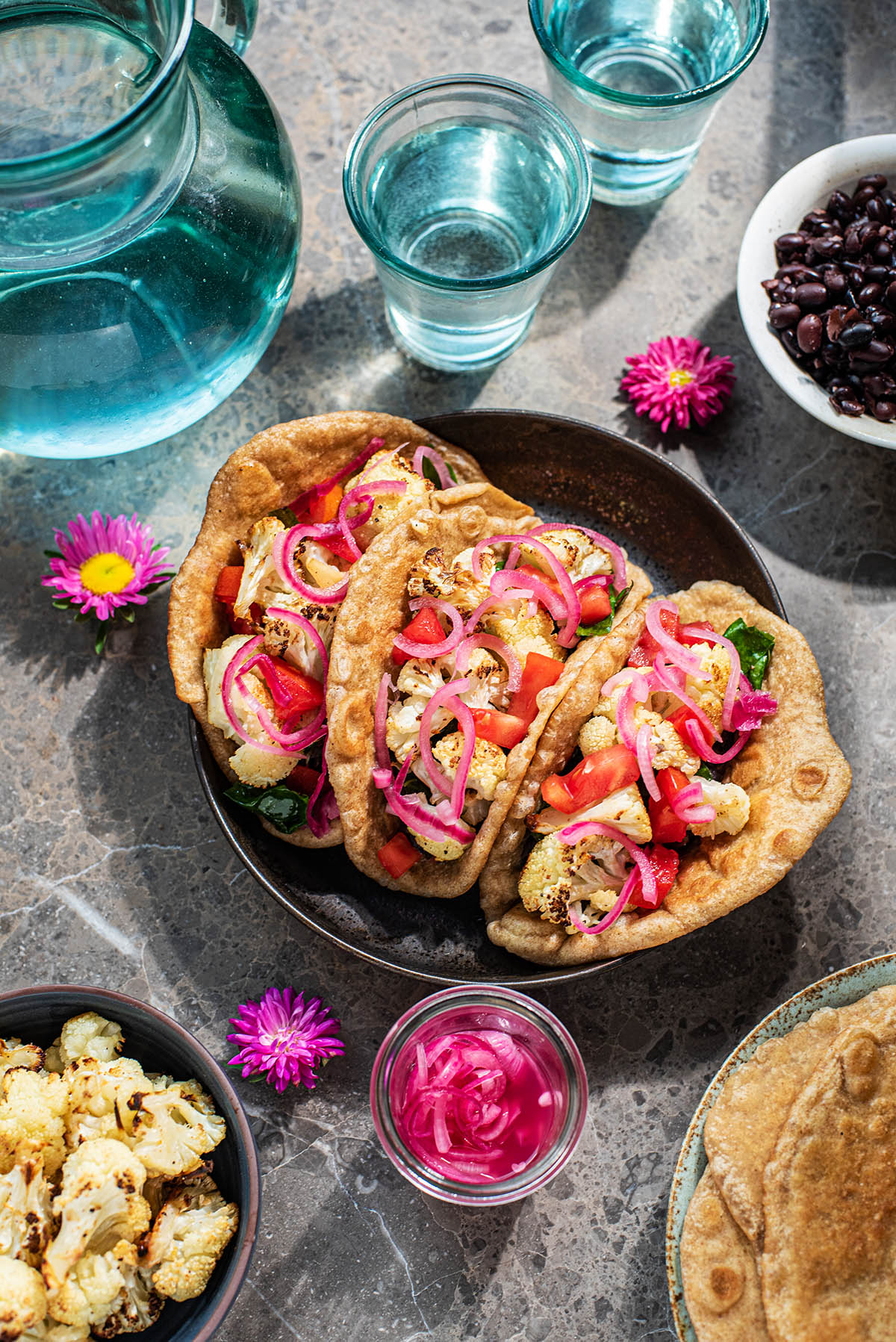 Hiding under all that roasted cauliflower is refried black beans, because a vegan taco isn’t any good without refried beans. There are a lot of vegan cauliflower tacos out there, I know, but most of them seem to be doused in hot sauce (not my thing) so I’ve gone for lots of spices and pickled onions for acidity.

I use my spelt tortillas for these and altogether, including the tortillas, it takes me about an hour from start to finish (you can’t get decent tortillas here). If you can buy tortillas it’s super quick, with mostly down time waiting for the cauliflower to roast.

I know it looks like a lot of ingredients when you look through the recipe, but it’s mostly spices, so don’t be put off. It’s not very much active time – only about 10 minutes, then 20 minutes in the oven – and then you get tacos!

The ingredient photo looks a bit different from the rest because I had different light for the pictures – shooting in the evening as we move into winter gets tricky.

Start by making the pickled onions if you don’t already have a batch made. They need at least an hour to rest. If you want to make your own tortillas, I mix the dough before I start the cauliflower and then multitask with frying the tortillas while prepping the other elements.

Prep the cauliflower, then add it to a large baking sheet with the oil and spices. Roast at 200C for about 20 minutes, or until golden.

While the cauliflower is in the oven, make the refried beans. Cook the onions briefly before adding the garlic, followed by the beans and spices. Stir in the tomatoes, then mash with the back of a wooden spoon or a potato masher. Taste and season as needed, then let this simmer over low heat while the cauliflower finishes up.

For the chard, add it to a bowl with the oil, vinegar, and spices, then use your hands to mix. Massage the greens a bit to soften them.

Assemble the tacos in the following order: refried beans at the bottom, then chard, cauliflower, pickled onions, and any other toppings.

For creamier refried beans, add a couple tablespoons of coconut cream after mashing everything up. You could add vegan cheese, too.

It won’t hurt the refried beans to rest in the pan for a little while. They can stay on very low heat, with the lid on, while everything else is finished up. You may need to simmer a little longer than the recipe states if using very juicy fresh tomatoes to reduce the water content a bit.

Cauliflower is in season (depending on the type grown) almost throughout the year depending on where you live. Here in zone 8-ish I can grow different varieties just about year round, so you can pair it with any number of seasonal toppings.

Pinto beans should really be used instead of the black beans, but they’re impossible to find here and black beans work well. You can also use kidney beans.

No chard? Use kale, spinach, or rucola. Or skip the massaging step and top with fresh greens. Baby spinach or lettuce work well for this, but in that case I recommend topping the taco instead of layering the greens inside.

Add any toppings you like and change it up based on the season. I used the very last of my garden tomatoes here as well as early chard, but anything you like on a taco will be great.

This post was originally published in February 2018. It has been updated with new photos and text, and some very small tweaks to the recipe, as of October 2020.