May 31, 2021 by Alexandra Daum
Vegan naan made with spelt flour and just a handful of other ingredients. Naan is really easy even if you're not used to making bread, and an delicious addition to just about any meal.
Jump to Recipe 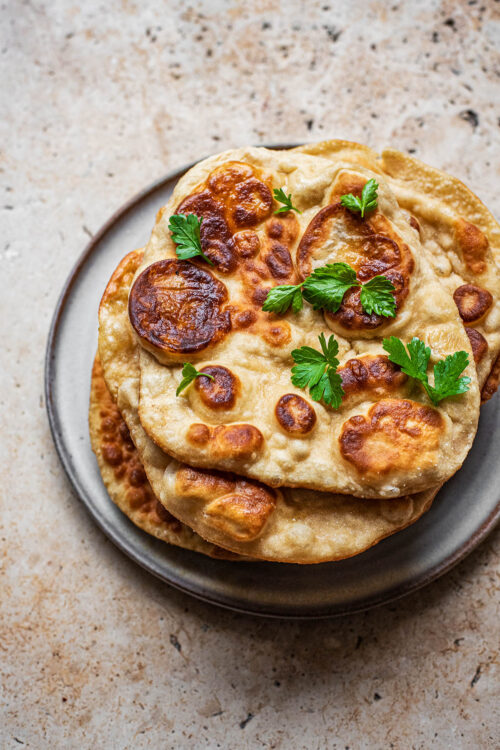 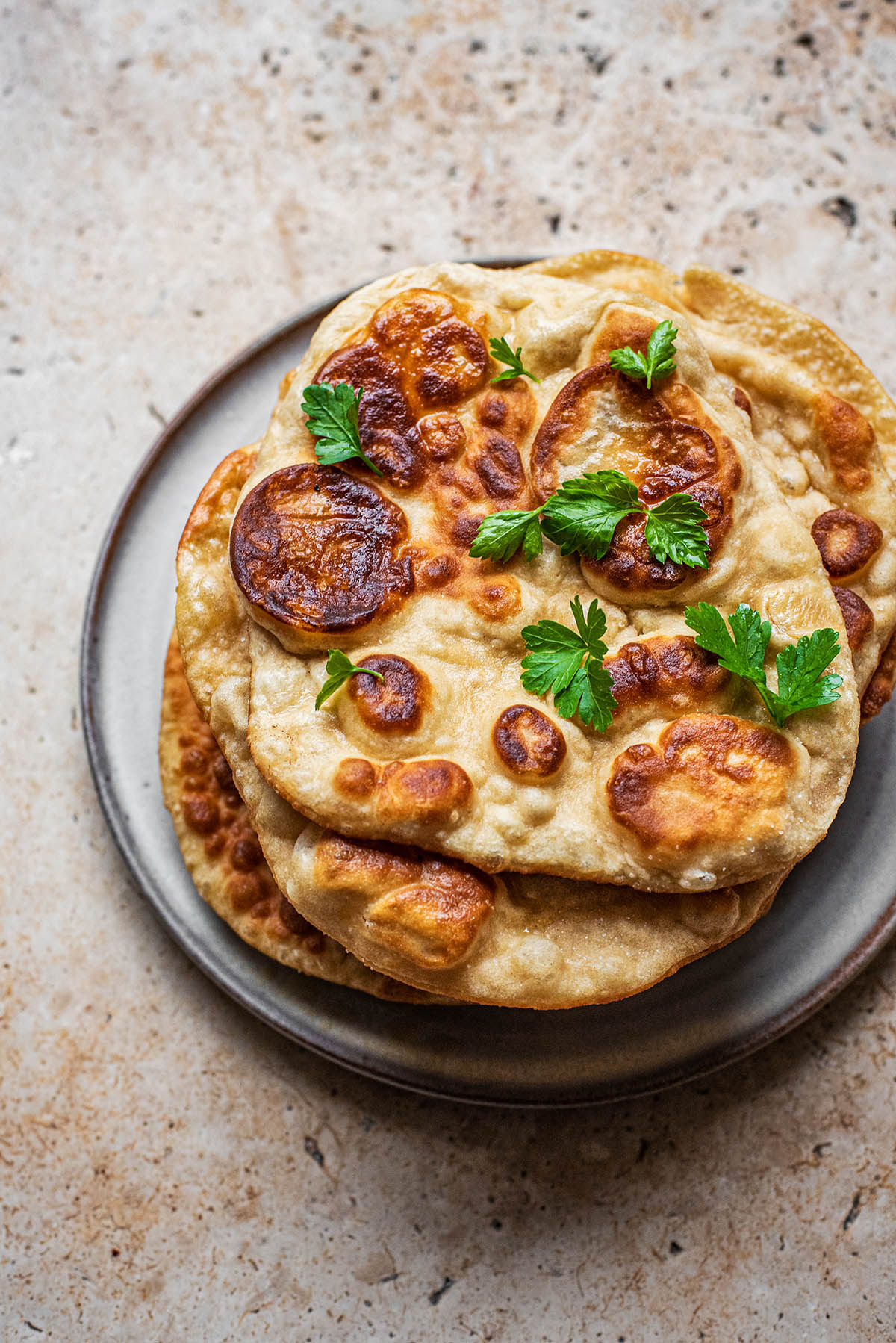 Vegan naan made with spelt flour and just a handful of other ingredients. Naan is really easy even if you’re not used to making bread, and a delicious addition to just about any meal.

Naan is a South Asian flatbread – naan just means bread – and the type most often seen in the global north is typical to parts of India. It’s traditionally cooked in a tandoor, a cylindrical oven (and many Indian or other South Asian restaurants in Europe/America will make it in a tandoor). Using a pan is obviously not authentic, but it’s as close as you can get without a proper oven.

I’ve been making naan (with varying success) since I was just little. It’s one of the easiest breads to make, and turns out well at home using a frying pan. I make it all the time to have with curry, red lentil patties, just with hummus, or whatever.

Even if you’re completely unfamiliar with making yeast-leavened breads at home, you can make still make this easy spelt flatbread. Only one rising period, no baking, no complicated shaping. This is great for beginners.

This vegan version uses olive oil instead of ghee and works well for a dairy-free diet. Use either light or whole grain spelt depending on how soft you want the end result to be.

My trick for really good vegan naan at home is liberal amounts of olive oil in the frying pan and adding a little salt to each side as you cook it. Not the healthiest, I know, but I was told to add sodium to my diet to help with black spots and lightheadedness – if you follow a low-sodium diet, perhaps avoid this step.

Your kitchen might get a little steamy or smokey when you’re cooking this, so keep a fan on or crack a window! I’ve had the fire alarm go off several times while making naan.

If you need quite a bit of flour to roll the pieces out, try to brush as much of it off before frying as possible. This is part of what makes the kitchen quite smokey during cooking (the flour burns as it remains in the pan).

This recipe makes a big batch, about a dozen pieces, and if you don’t want to have lots left over then I’d recommend reducing by half. It’s best fresh, but still pretty good on day two, so don’t make more than you think you can eat in two days.

The dough can be frozen after rising – this is great if you just want to cook half – and thawed to use later. Simply thaw in the refrigerator overnight then roll and cook as usual.

The pan needs to be hot before starting to cook. If the bread doesn’t immediately start to bubble up when it hits the pan, it needs to heat up more.

Plain white flour can be substituted for the spelt. Regular whole wheat flour is harder than spelt, so I don’t recommend going over 50%. Other ancient grains like einkorn and khorasan wheat can be used.

I haven’t tried making these gluten-free. A good GF flour blend may work but I can’t comment on it.

Looking for something similar with no yeast? Try these spelt tortillas or sweet potato flatbread, or go with socca for a GF option. I have a sourdough naan recipe over at Baked, too, if you prefer to use starter.

Try adding different herbs and spices to the mix to change things up. There’s a garlic naan in my cookbook that’s great, or try adding cumin seeds, nigella, finely chopped parsley, and so on.

Recipes to Serve with Naan

* if it doesn’t bubble or foam, buy new yeast, or start again with cooler water.

This post was first published in January 2018. It has been updated most recently as of June 2021.