September 6, 2022 by Alexandra Daum
This roasted French potato salad with lentils and a herby dressing is a far cry from standard mayo-filled potato salad - it's very light and a meal in itself with protein-packed lentils and spinach. The herb vinaigrette lifts everything up here, with dill, chives, and a little spicy mustard, perfect for picnics and barbecues.
Jump to Recipe 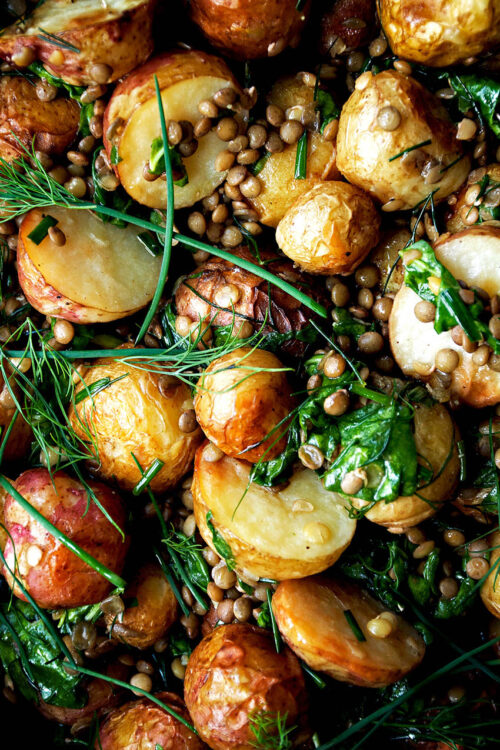 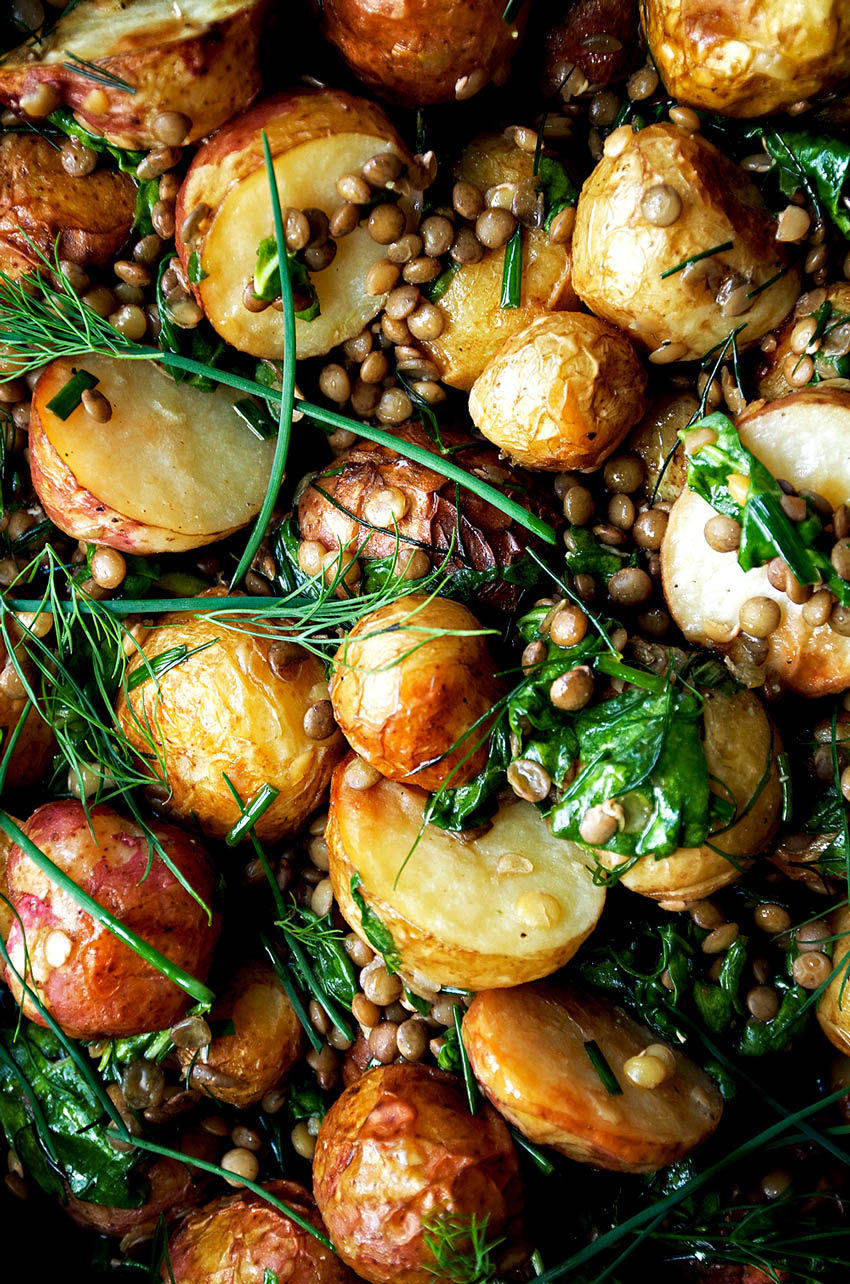 This French-style new potato salad is a far cry from the German potato salad I grew up eating. No mayo, no bacon – but lentils! Roasted new potatoes, lentils, greens, and plenty of herbs, all topped off with a mustard vinaigrette. It’s a classic made into a solid vegan weeknight meal.

We make this at least once a week when new potatoes are available, and it’s a treat every time. There’s something quite special about a warm potato salad, particularly when you add the combination of crispy potato skin and chewy lentils to the mix.

A handful of alternative potato salad recipes grew out of this one, mostly based on requests I’ve received from readers. This curry potato salad, a version with asparagus, and a winter rosemary potato salad.

I can’t say enough good things. While I’m not averse to a good dill pickle potato salad, there’s something special about all the fresh flavours and textural variety happening here. It’s a gardener’s dream.

1. Prep the potatoes: scrub and trim the potatoes as needed, then add them to a large pan with the oil and salt.
2. Roast: cook the potatoes for about 40 minutes, or until crisp and golden.

3. Make the vinaigrette: while the potatoes are cooking, mix the vinaigrette ingredients in a jar or dish.
4. Assemble: add the hot potatoes to a bowl with the greens, lentils, and vinaigrette, and mix well.

The big, important thing for this recipe is to mix everything together while the potatoes are still very hot. Have everything but the vinaigrette already in a large bowl ready for the roasted potatoes so they can go straight in.

If you’re cooking lentils specifically for this recipe, or any time, really, salt the water they’re cooked in. It makes a particular difference here to have seasoned lentils but is generally better.

You might notice that some of the potatoes I used are red, and some are partly peeled. They’re from my garden (second early, mostly Annabelle) and some had slight potato scab which I cut off. I don’t recommend peeling your potatoes for this recipe.

Storage: leftovers will keep well for a couple of days in a sealed container in the refrigerator. This is best when fresh and still warm, though.

If you make this Roasted Potato Salad or any other vegetarian mains on Occasionally Eggs, please take a moment to rate the recipe and leave a comment below. It’s such a help to others who want to try the recipe. For more OE, follow along on Instagram, Facebook, and Pinterest, purchase the Occasionally Eggs cookbook, or subscribe for new posts via email.