June 17, 2021 by Alexandra Daum
This vegan rhubarb streusel cake is a healthier twist on the German classic, made with coconut sugar and a soft spelt base. It's essentially bread and a vegetable and therefore totally acceptable for breakfast.
Jump to Recipe 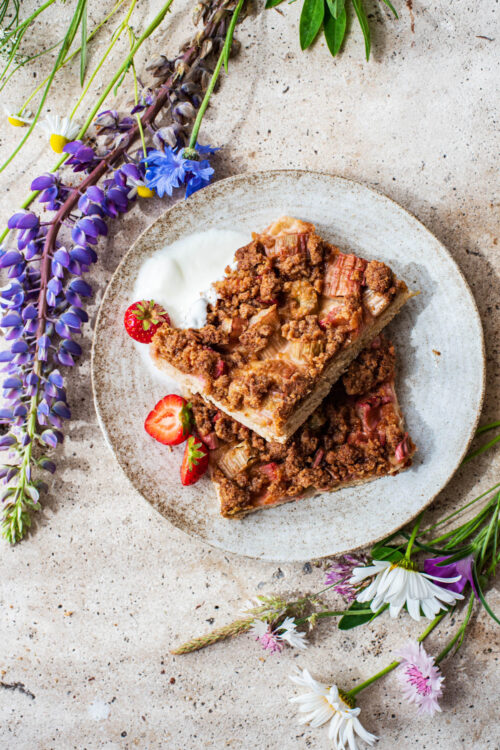 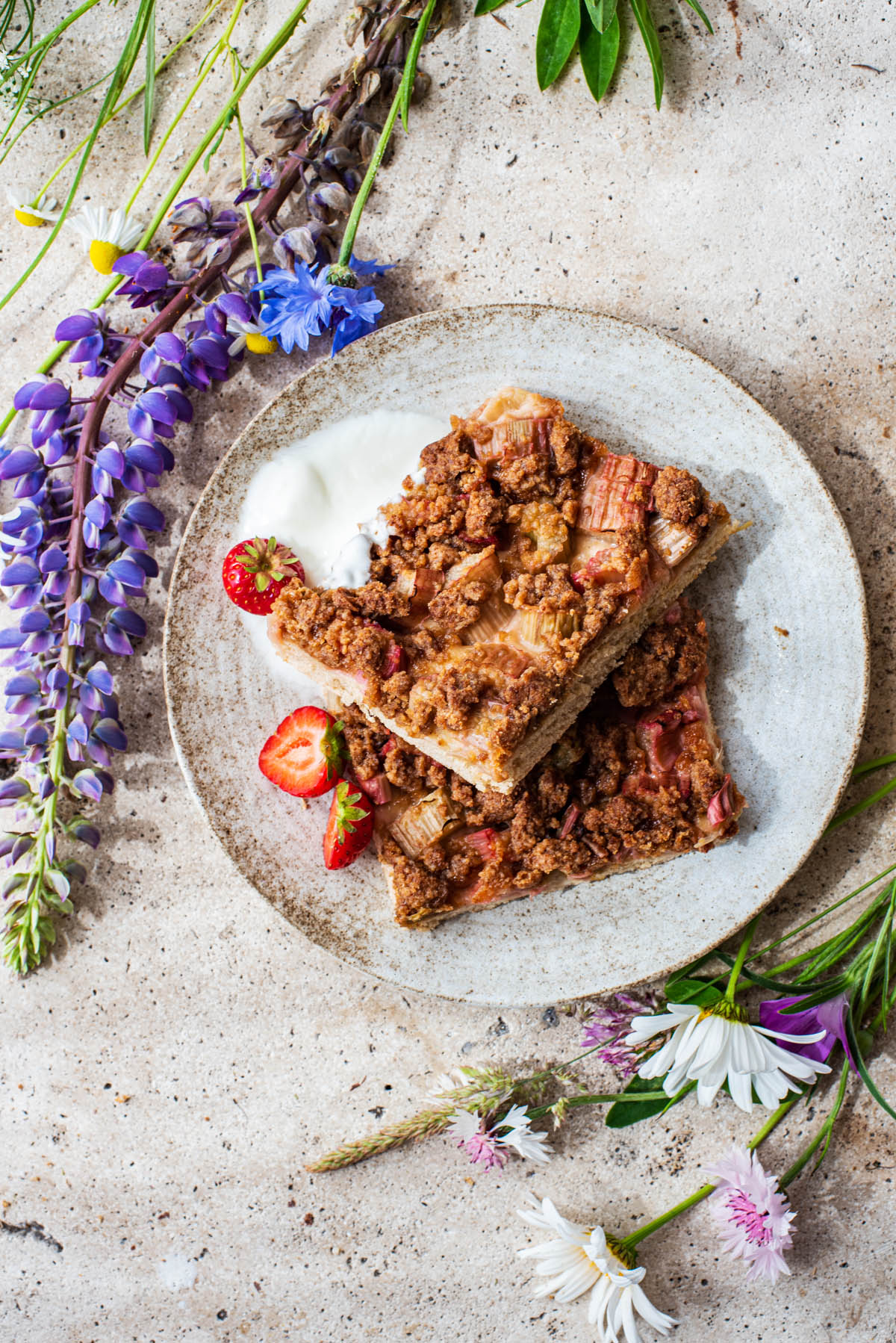 If you’re looking for a recipe that doesn’t use yeast, try this vegan lemon rhubarb cake instead.

This is a cake I’ve been making since I was about ten years old. It’s a family favourite. My omi requests it whenever rhubarb is in season, my great-grandmother made it often, and my mom taught me when I was little.

Rhubarb streusel cake is very popular in Germany in the springtime and I’ve always made it with the first rhubarb from our garden. The pinkest rhubarb you can find will always look best, though it doesn’t really change the flavour. If you don’t like rhubarb, the base recipe can be used with any number of fruits.

This is a yeasted recipe, with a sweet bread base and the rhubarb and crumble topping. Streusel is just sugar, fat, and flour mixed into a crumbly blend, the same thing you’d use to top a rhubarb crisp. In this case it’s coconut sugar, coconut oil, and spelt flour. No oats are used.

It’s best the day it’s baked, but still good a day or two later. The topping softens a bit as it sits because of the liquid in the rhubarb, but it’s not bad. Serve it with coconut whipped cream or yogurt, or enjoy it plain.

There are a number of notes here, but they don’t mean the recipe is complicated – just that I want you to succeed even if you’ve never made a yeasted cake before. Please read through this if you haven’t and keep them in mind as you go through the recipe.

The milk mixture cannot be too hot before mixing with the yeast. If it is, it’ll kill the yeast. Use your fingertip to gauge this – it should be skin temperature or just barely warmer, and definitely not uncomfortably warm to touch.

If you don’t think your milk was too hot and it still didn’t bubble 15 minutes after adding the yeast, your yeast was dead and you need to buy new. Yeast should be refrigerated to keep it fresh for a longer time.

It generally takes a couple of hours for my dough to rise fully, unless it’s a very warm and sunny day. Yours may rise much faster in a warm house, or a bit slower in a very cool place. Keep in mind that it needs time, same as any other bread, but it will vary a bit.

Your streusel might be a little more or less crumbly depending on your flour, how dry your sugar is, and the humidity. If it’s too wet, it usually needs more flour. If it’s holding together but not really crumbling, add more sugar. If it’s too dry then sparingly add more oil.

Add small amounts until you get the consistency you want. The milk makes the streusel act a bit more like a butter-based version when baking (butter is fat and water, not pure fat like coconut oil).

If your coconut oil is very hard, if it’s been stored in a cold place, using your hands to mix it with the streusel ingredients will heat it enough to incorporate. Alternatively, if it’s melted, measure it out and then refrigerate until hardened.

There’s no need to peel the rhubarb for this recipe. Adding a tiny bit of lemon and sweetener isn’t completely necessary, but really improves the taste of the fruit. If you use a different fruit, still mix with the lemon juice and maple syrup beforehand.

Several readers have had success making this recipe gluten-free by using a 1:1 GF blend like the mix from Bob’s Red Mill. I haven’t personally tested this and can’t offer guarantees, but it seems to work pretty well.

All-purpose white flour can be substituted for the spelt if you prefer, as can cane sugar for the coconut sugar. The recipe notes the amounts for both fresh and dry yeast – dry can be either instant or traditional.

If you’d like to make this at times of year when rhubarb isn’t in season, a number of fruits can be used in its place. Plums and apples are traditional, but apricots, peaches, blueberries, and many others are good too. It will be quite a bit sweeter when using alternatives due to rhubarb’s natural tartness.

This post was originally published in May 2017. It has been updated with improvements to the text and recipe as of June 2021.