November 7, 2022 by Alexandra Daum
A healthier, vegan version of Swedish cardamom buns - folded and twisted for a beautiful roll. Made with spelt flour, coconut oil, and coconut sugar.
Jump to Recipe 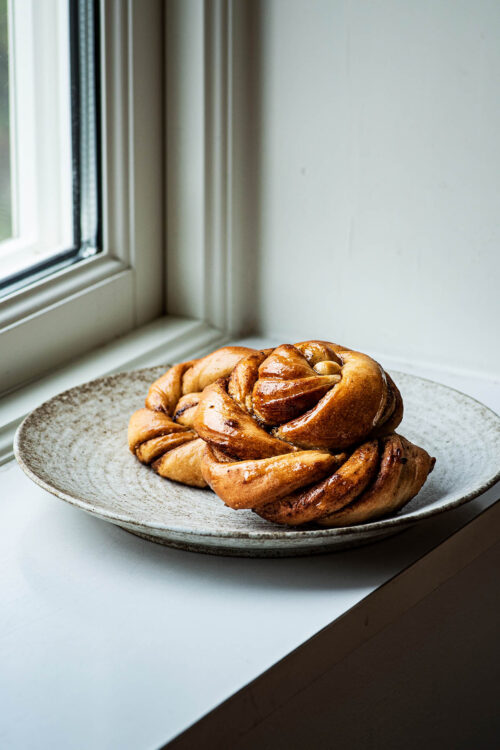 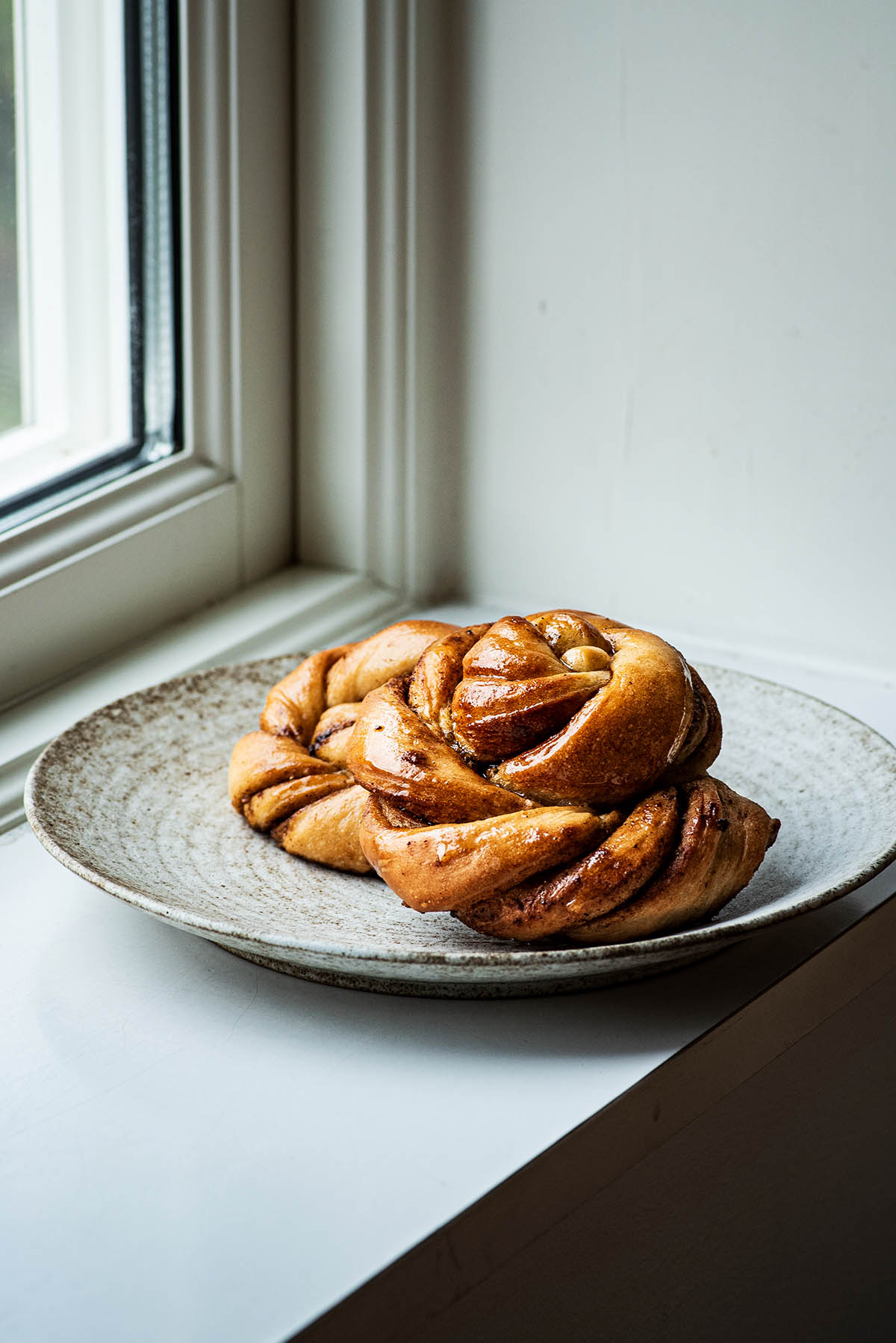 Swedes are obsessed with cardamom, and Swedish cardamom buns can be found in any bakery and most grocery stores here. This version uses spelt flour, coconut oil, and no white sugar for a really flavourful, healthy-ish bun that’s just as good as a bakery bun.

These are soft, lightly sweet buns, and taste a lot like what you can get in Haga in Gothenburg (just with less sugar). I don’t add pearl sugar, which is typical, but you can sprinkle some on if you want that really classic look.

Why You’ll Love This Recipe

It’s a classic cardamom bun made with shelf-stable, pantry friendly ingredients. Even if you don’t follow a vegan or dairy-free diet, it’s a good recipe to have on hand.

1. Prep the wet ingredients: heat the milk and melt the coconut oil, then whisk the yeast in.
2. Mix in the flour: add the dry ingredients and mix into a shaggy dough.

3. Knead until smooth: turn onto a work surface and knead into a soft, smooth ball.
4. Rise: cover and set aside to rise until doubled in size.
5. Fill: roll out the dough and add the filling, then fold into thirds.
6. Divide: cut the dough into equal pieces, then stretch each piece out and twist.

7. Roll into buns: either roll into spirals or knot the buns, depending on what you like more.
8. Rise and bake: set aside to rise again until puffy, then bake until golden.

The proving time may vary based on the ambient temperature of your home. In a warm house, the dough will rise very quickly (but keep in mind that enriched dough is always a little slower). In the winter time, it can take up to twice as long.

Fresh cardamom from pods rather than ground will both give you the best flavour and be more authentic to Swedish cardamom buns. Coarsely ground cardamom is most often used.

You can roll the dough into snails (see spelt cinnamon rolls) rather than individual buns. This is a good option if you’re not confident about the slightly more complicated shaping here.

As the yeast is proved before mixing with the dry ingredients, any form of yeast (traditional, instant, quick, and fresh) can all be used interchangeably. The rising time will vary slightly based on the type of yeast used.

A range is provided for the flour needed because it’ll vary depending on whether you use all light spelt or a mix of light an whole grain. The same goes for subbing white flour.

While this recipe is vegan as written if using maple syrup, honey can be used interchangeably and you’ll see it in the video. This is a whole conversation, but I choose to use honey because it’s local to me, and more animals are hurt due to overseas transport, etc. so honey is a good option in Europe.

See the video for a visual on how to shape the buns. That part starts about halfway through.

Storage: these buns are best the day they’re baked, but can be stored in a sealed container for up to three days. I recommend lightly toasting before serving if they’re more than a day old.

Freezing: freeze any leftover buns in an airtight container for up to six months. They will be slightly dry after being frozen, but toasting helps. Brush with a little extra coconut oil when warm to freshen them up.

If you make these Swedish Cardamom Buns or any other ancient grain bread recipes on Occasionally Eggs, please take a moment to rate the recipe and leave a comment below. It’s such a help to others who want to try the recipe. For more OE, follow along on Instagram, Facebook, and Pinterest, purchase the Occasionally Eggs cookbook, or subscribe for new posts via email.

* You can also use one cube of fresh yeast here in place of the dry.
** Normal wheat flour will work well here but I wouldn’t try using all whole spelt as it makes them too heavy. If they need to be whole grain then go for sprouted spelt instead, but they won’t be as light.

This recipe was first shared in May 2018. It has been updated with process images and a video as of November 2022. There have been no changes to the recipe.