Vegan noodle bowls packed with veggies, a little fruit, and an orange peanut sauce. Colourful, healthy, and light food for the end of winter when we’re all ready for spring. 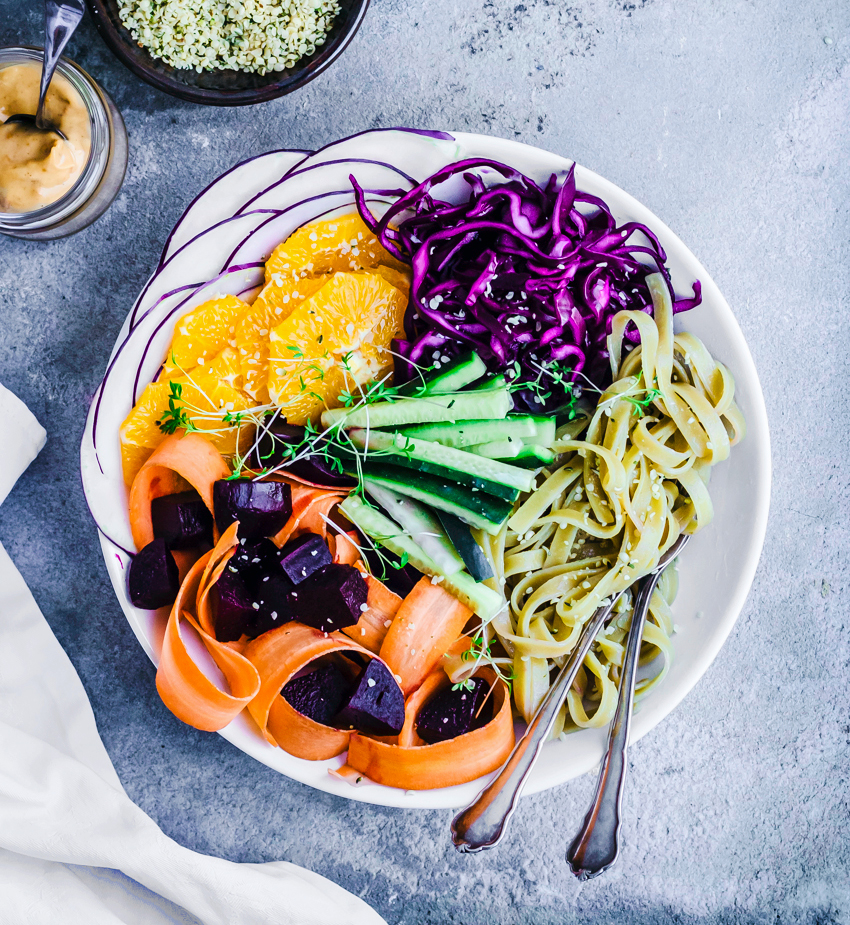 Looking for something fresh to get through the last bits of winter? I’ve got you! I’ve been really trying to get plenty of colourful, but still seasonal, foods in lately instead of just relying on just one or two vegetables. I lucked out with some locally grown hothouse cucumbers, along with kohlrabi, carrots, beets, purple cabbage, and oranges here.

These vegan noodle bowls are a fun way to get lots of veggies in, and I’ve used a legume pasta along with the peanut sauce to edge the protein up without having to add beans, or my nemesis, tofu. There’s a nice variation in texture with the steamed beets alongside the other raw vegetables and oranges. The red cabbage is a ride on my red cabbage and orange salad but simplified a bit since it’s being combined with so much other good stuff.

About that legume pasta. In the interest of full disclosure, I’m currently working with a new German brand, Planet Plant Based, but this isn’t a sponsored post – I’m doing some photography work for them and I think it’s good pasta. I’m using their green pea tagliatelle in this recipe and I really like it. Bean and legume pasta certainly has a bit of a different texture than regular wheat pasta, but I think as long as you know that from the beginning, you won’t be disappointed.

The trick is to find a brand that has a good flavour and texture and stick with it. I eat kamut and spelt pasta but it’s nice to have a high protein choice for recipes like this, so something additional isn’t needed. Otherwise you can use brown rice or rice noodles. This recipe serves two people but I didn’t want to make two for pictures since it was just me home, hah. Pure laziness. If you can multitask, these bowls can be ready in a little over half an hour, the amount of time it takes the beets to cook. Since they’re eaten at room temperature in any case, you can easily take it to work as well.

You can see that the peanut sauce is served in the photos in a little dollop instead of a drizzle, which is how I would usually do it. Graham has a thing for chunky peanut butter right now so it’s all we had, and if I don’t have smooth peanut butter I like to make it a little thicker. I’ve included the guidelines for both in the recipe so you can decide which you prefer – just make sure you’re using natural peanut butter and not the sweetened fluffy stuff, or it won’t taste right.

I’m sure you could sub something else (almond butter!) if you can’t have peanuts, or go with tahini if you can’t have any nuts. I’ve topped it with a little cress because I had it, but if you have sprouts, use those instead.

I sent one of these photos to my friend Heidi (The Simple Green) because I wasn’t sure they were reflective of my style and she said that whenever she sees that vibrant purple, i.e. cabbage, she thinks of my pictures! I am Kraut Frau.

This recipe was totally inspired by Alanna from The Bojon Gourmet but unfortunately my pictures will probably never match up to hers! I thought that the recipe came to me without outside influences but I saw this recipe again when I was on her site today and it was clearly influenced by her beet poke bowls so I went all out and let her beautiful styling inspire the photos, too. Hers are more sushi bowls and I’m not pickling the veggies for this recipe, but those poke bowls look awesome. 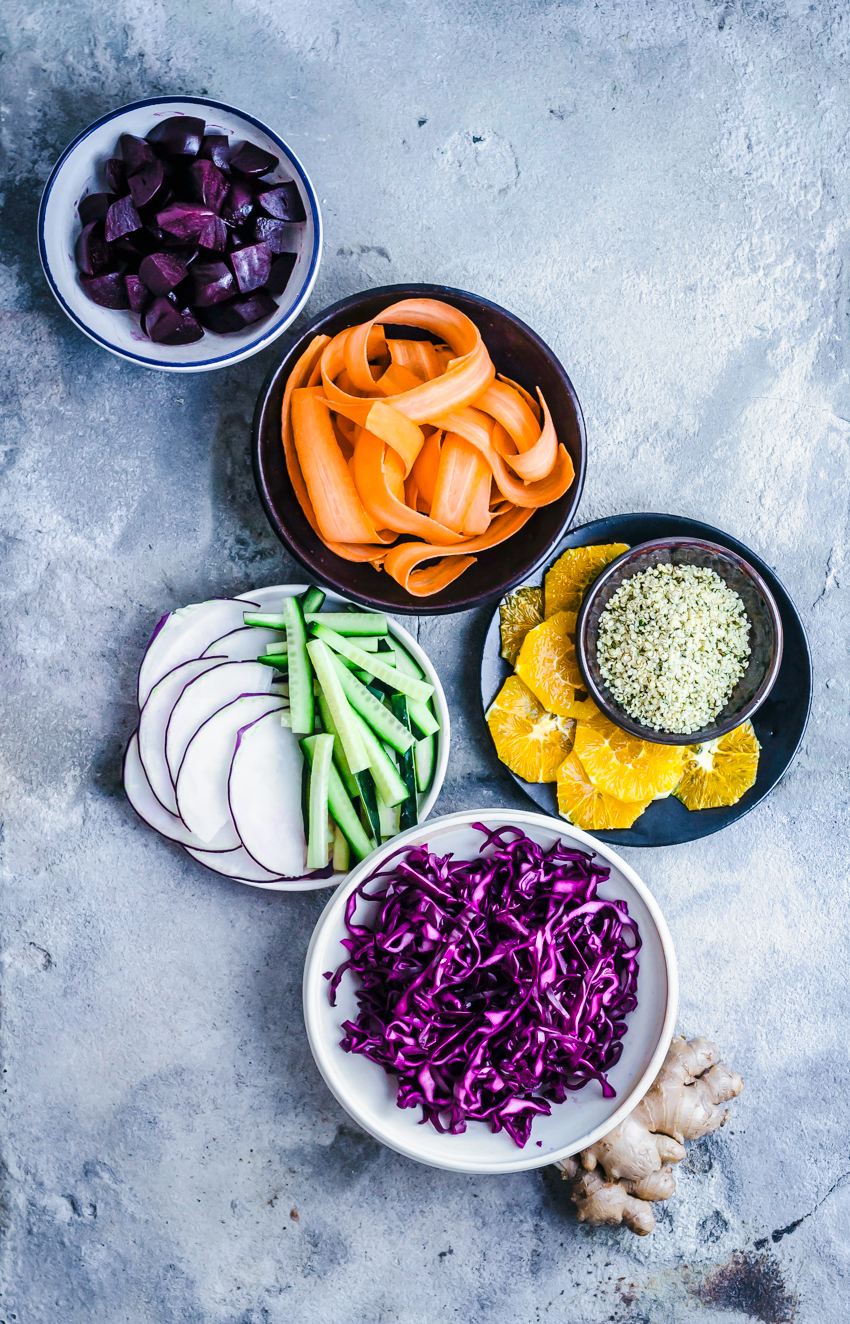 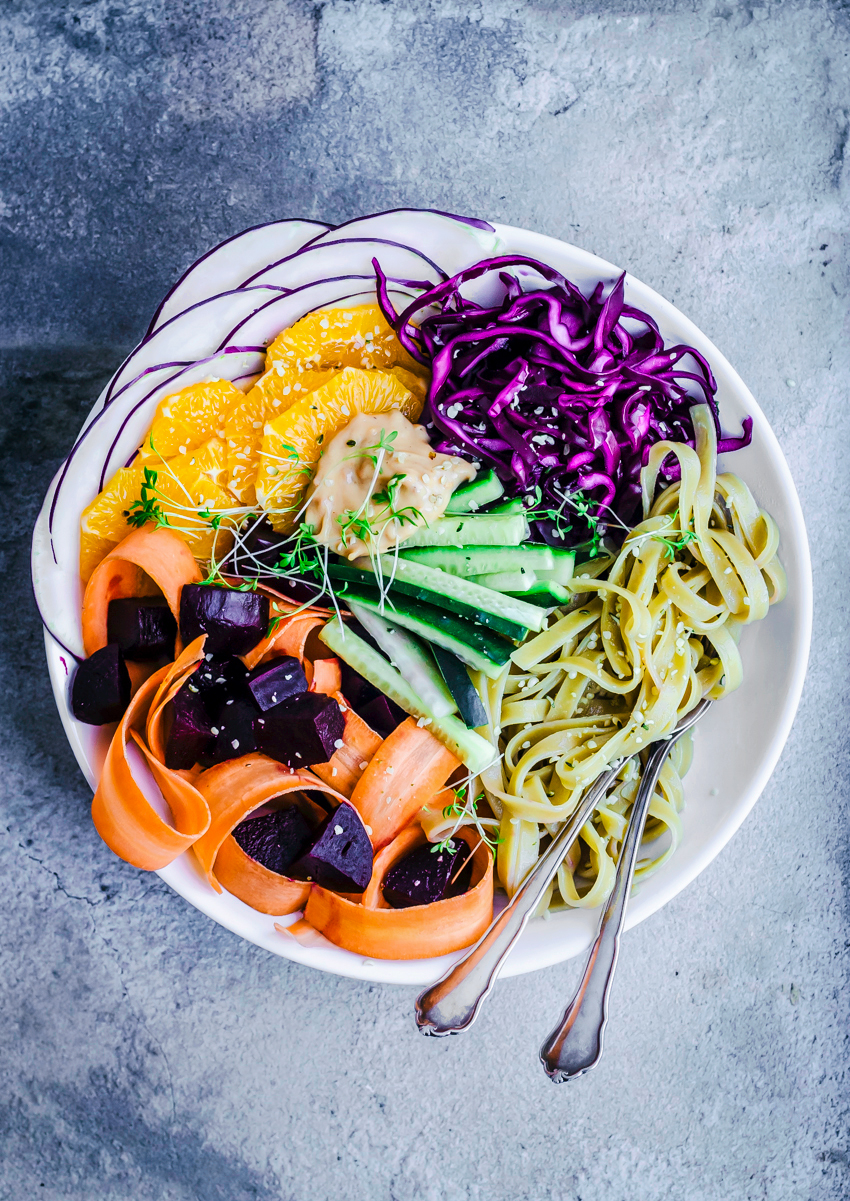 • If you want to thin out the peanut sauce more to make it a drizzle, you can add a little water or some more orange juice until it reaches the consistency you'd like.
* I know kohlrabi can be hard to find, but it's just a mild, crunchy root vegetable. You can substitute radishes for it. 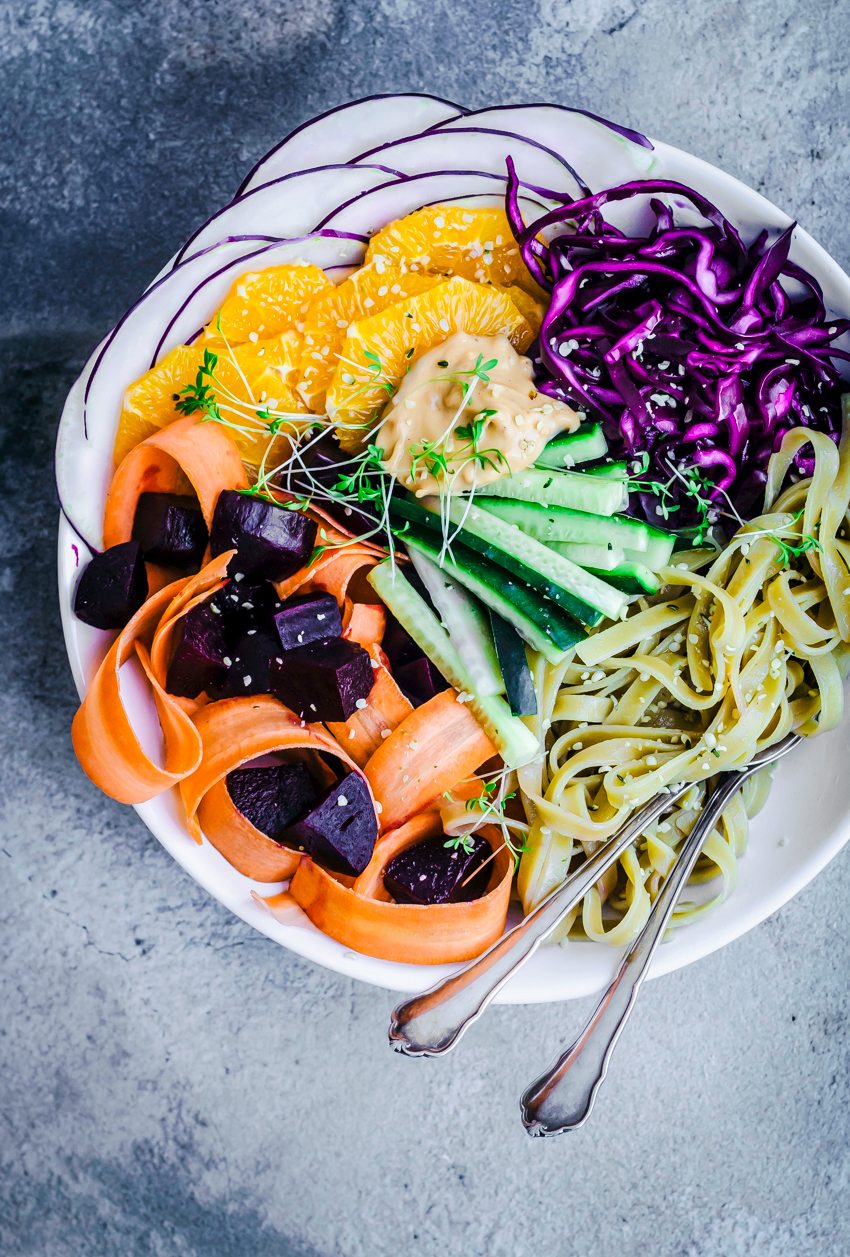