July 3, 2021 by Alexandra Daum
German-style thin spinach pancakes make a delicious vehicle for any fillings you like – pack these gluten free pancakes full with vegetables for an easy green weeknight dinner.
Jump to Recipe 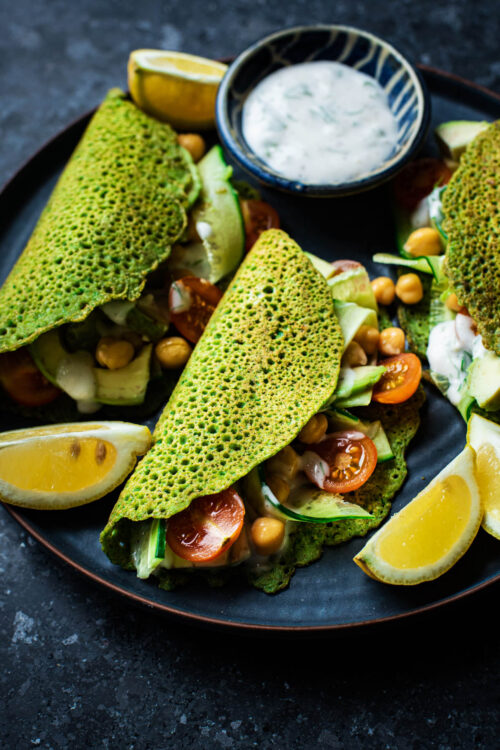 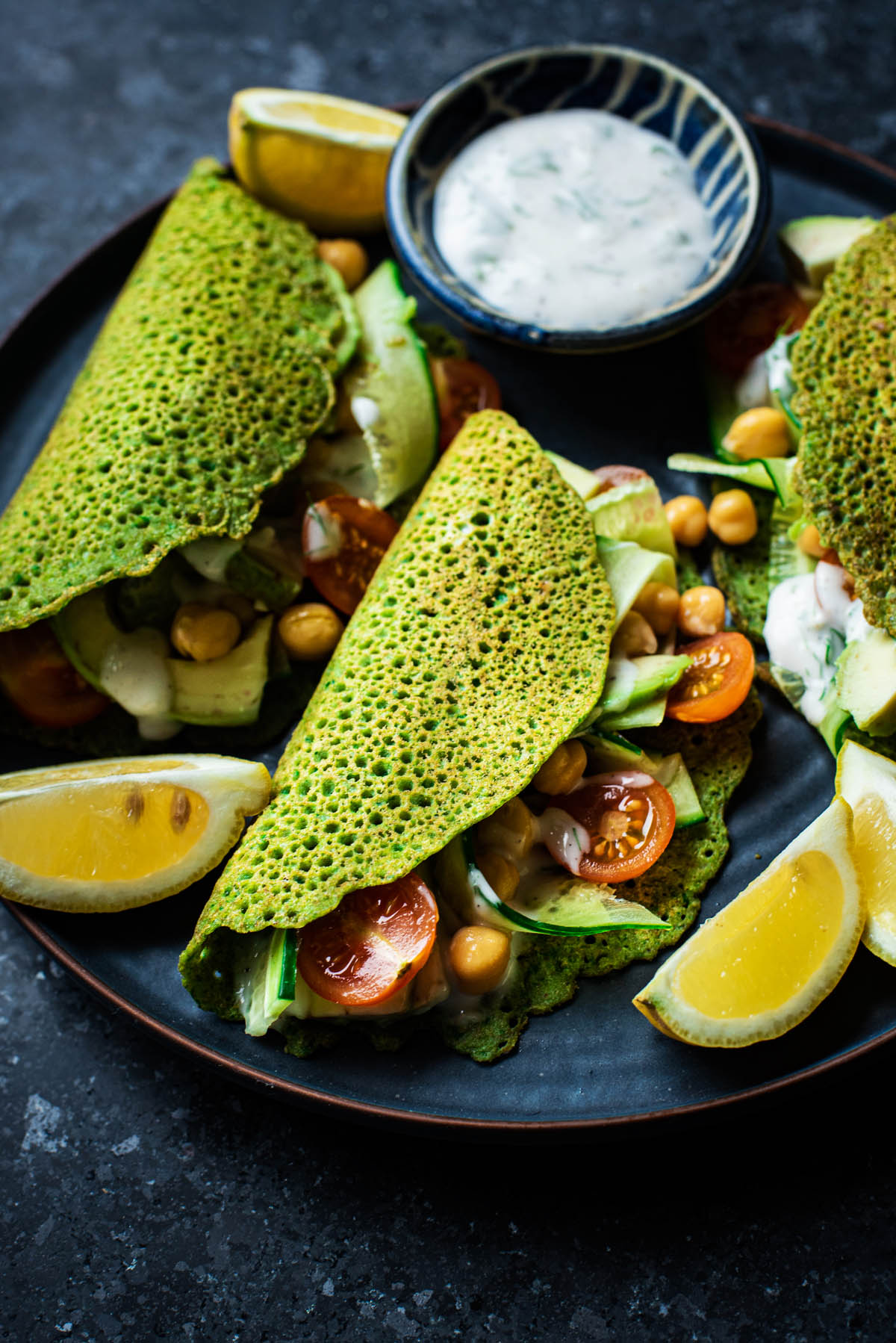 A lovely dinner, spinach pancakes are loaded with greens and filled with even more veg for an energising, simple dinner or lunch. I’ve used the last of my bolting spinach for this and it’s a great way to use yours up before cutting back to make space for the next crop to go in.

These are thin pancakes, almost spinach crepes – not fluffy baking powder leavened American pancakes, but what’s quite common in Europe and the UK. Delicious filled with savoury vegetables using whatever you have on hand.

I use an immersion blender to make the pancakes, but of course a standard blender would work just as well, if not better. I still recommend mixing the spinach and liquid ingredients before adding the flours to ensure a nice smooth texture.

If you want to make sweet pancakes, omit the spices and add a tablespoon of coconut sugar instead. Fill with berries or other fruit, nut butter, and so on – if you want to go the sweet route, use more buckwheat than chickpea flour rather than half-half.

Sub other greens for the spinach, as long as they’re not too tough to blend fully. Chard, rucola (arugula/rocket), and baby kale are all great.

You can certainly try to make these vegan, but I found that they were very difficult to keep consistently good when both vegan and gluten-free. Flax is a decent substitute but doesn’t hold the pancakes together as well and they are much more likely to break.

On that note, if you want vegan pancakes, and don’t mind gluten, just use wheat flour and then the eggs can easily be omitted (add water as needed for the right consistency). I still suggest adding about a tablespoon of arrowroot or cornstarch but don’t find that flax or another typical egg replacement is necessary in that case.

It’s probably possible to use a GF flour blend in place of the buckwheat and chickpea flour, but I haven’t tried. I do find that a combination of the two results in both the best flavour and texture – if you often make gluten-free recipes, these flours will be pantry staples in any case.

If whole grain buckwheat is too strong a flavour for you, use light flour instead. The batter may smell a bit odd before cooking, but that’s the chickpea flour, don’t worry – it doesn’t smell like that when cooked.

If your first pancake breaks, it’s probably because the pan isn’t hot enough. Give it a little more time to heat fully before trying the second.

* Thawed spinach can also be used, but not frozen. ** The amount of batter can vary, as long as it’s not over-filling your pan. The cooking time won’t change unless the pancake is too thick, which it only would be if it’s too much batter and reaches the edges of the pan (keep it a few cm from the sides of the pan and you’ll be fine).

This post was first shared in January 2018. It has been updated with some improvements to the recipe as of July 2021.