January 16, 2021 by Alexandra Daum
This easy one pot vegan tomato sauce is made all in one pot, with no browning or dicing beforehand - toss it all in the pot and let it simmer, puree, and done.
Jump to Recipe 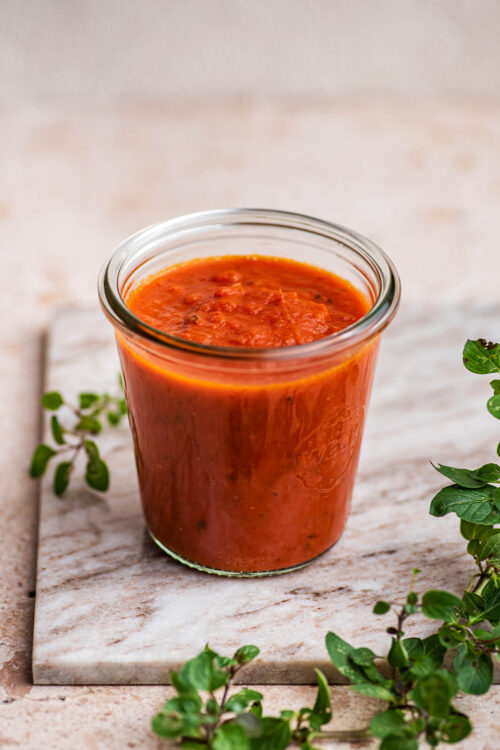 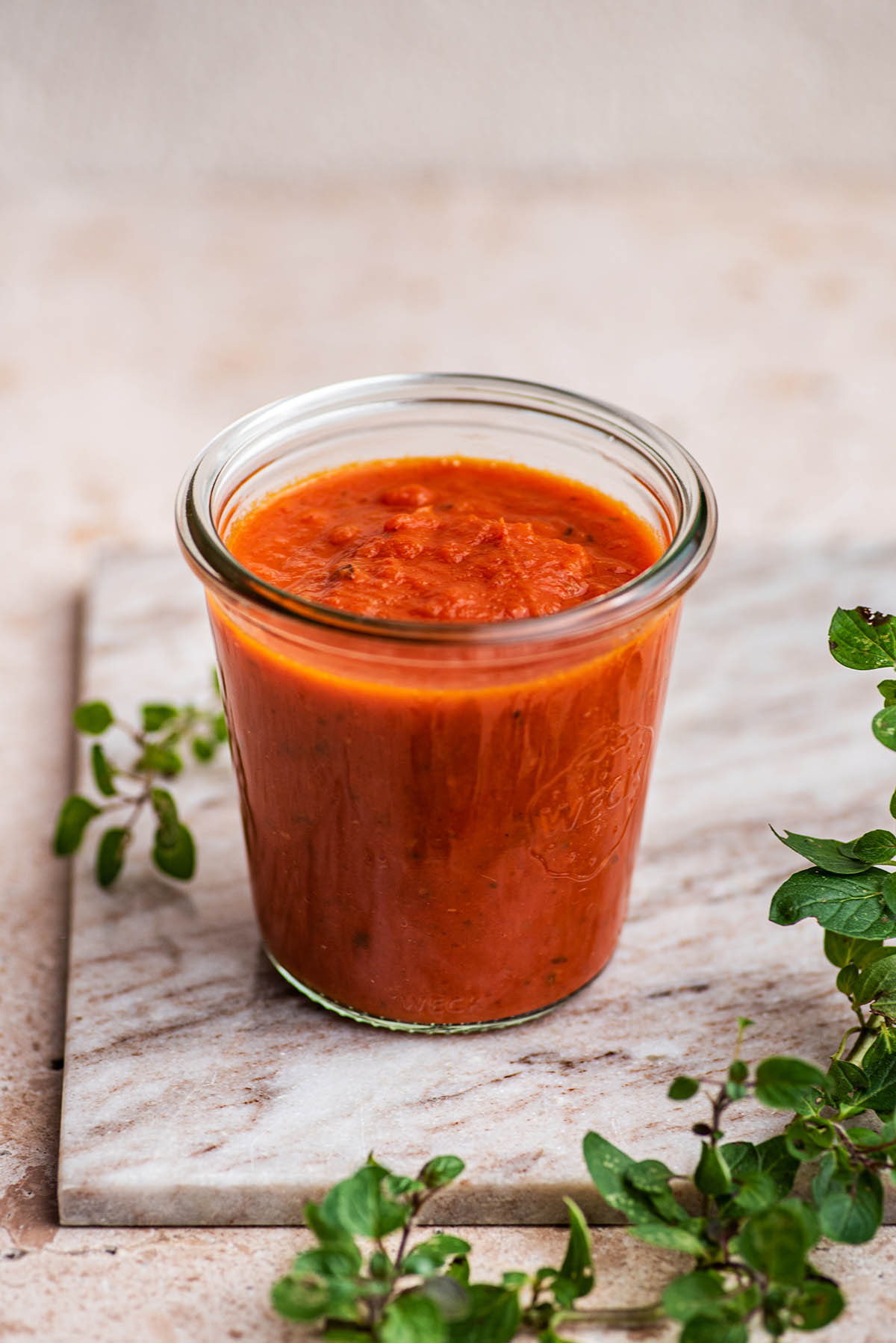 This is just a simple vegan tomato sauce, but the easiest and best-tasting I’ve ever made. It’s very loosely based off a version my mom makes, but she adds a load of butter – this recipe uses olive oil and not nearly as much.

The idea behind this sauce is a long(ish) cooking time and good, basic ingredients. I love chucking all of the ingredients into the pot and forgetting about it. No fine dicing, no browning, no preheating the pot.

You might think, like I did, that a tomato sauce needs to have those extra elements and techniques to make it more flavourful – the browning, the sweating of the onions, maybe a little sweetener. Turns out it definitely doesn’t.

This marinara is ultra flavourful but missing that slightly bitter note that a not-great vegan tomato sauce can often have. Simmering for a long time and subtracting the browning element results in a sweet, subtle end result that you’ll want to keep eating forever.

It’s also about the easiest sauce you’ll ever make and totally foolproof. This is the recipe I give to kids (or adults!) who are first learning to cook.

Peel and roughly chop the onion and garlic. Place them into a pot with the tomatoes, olive oil, wine or vinegar, salt, pepper, and herbs.

Stir to combine, trying to make sure the pieces of onion are covered by the tomatoes.

Cover and heat the pot over high to bring to a rolling boil. Reduce to low heat and simmer gently, covered, for at least 30 minutes, or up to 4 hours.

Carefully puree the sauce with an immersion blender or a heat-safe standing blender. Taste and season as needed.

This freezes very well for up to 3 months and keeps in the refrigerator for up to 5 days in a sealed container.

The extra olive oil is what makes this tomato sauce so smooth and delicious – fat carries flavour, after all. Please don’t reduce it, as it’s really not that much when you consider it’s a whole batch of sauce.

I use an immersion blender to puree (one of my most-used tools) but you can also use a heat safe blender. If you don’t have either of these, wait for the sauce to cool fully before carefully blending in a normal mixer or food processor.

Serve this with any pasta you like – this spelt pasta is pictured – or with vegan meatballs, red lentil falafel, on pizza, however you like tomato sauce. It freezes really well (up to three months) and you can easily make a bigger batch to freeze for later.

If you add fresh basil, stir it in once the sauce is done cooking rather than simmering it. If cooked too long, it’ll lose most of its flavour and can become bitter.

Any herbs you like with tomatoes, or with Italian recipes, can be used here. Pictured, and in the video, are a blend I have for pizza. It’s thyme, oregano, basil (which is a bit iffy dried), rosemary, and savoury. When I have fresh herbs I add everything but the rosemary and use extra basil.

If you want to mix things up and take it from a basic marinara to a different sauce altogether, oat cream or another plant based cream makes a nice fake vodka sauce, or stir in some pesto at the end of cooking.

Fresh tomatoes can be used here 1:1 for canned if you have an excess, and taste spectacular. If using canned, whole tomatoes are often better quality than diced. I can only get diced at the moment and of course they work just as well.

If you don’t drink wine, or don’t have any in the house, use balsamic vinegar as noted in the recipe. Don’t mix them up and use three tablespoons of vinegar, it won’t be nice.

To sneak some extra vegetables in, dice them finely add them to the pot and simmer with the other ingredients. Once blended, they won’t be noticeable. Think carrots, celery, red pepper, anything that doesn’t have a particularly strong flavour.

For a higher protein option, try this lentil bolognese recipe.

* I use at least double this amount of salt for mine but I think others prefer a less seasoned sauce, so go by your preference as always. ** I use a mix of thyme, oregano, basil, rosemary, and savoury.

This recipe was originally published in April 2020. It has been updated as of January 2021 with a video and new step by step photographs.