June 2, 2021 by Alexandra Daum
This spicy tomato soup is made creamy with coconut milk and flavoured with curry spices, like cumin, ginger, and turmeric. It’s a great soup to make when you feel a cold coming on.
Jump to Recipe 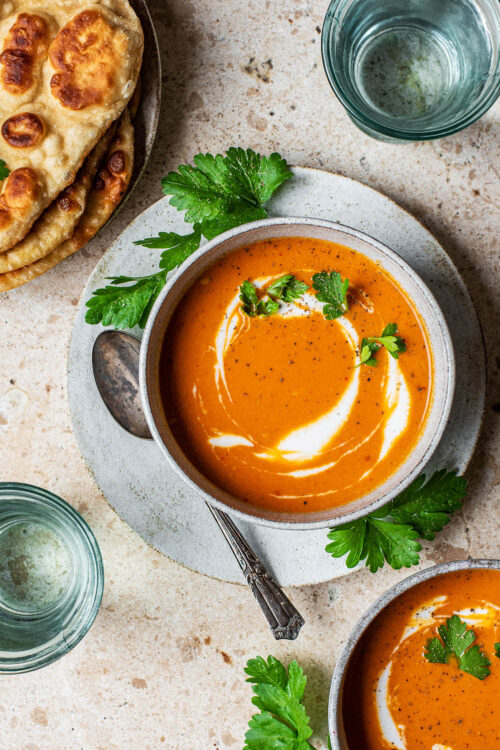 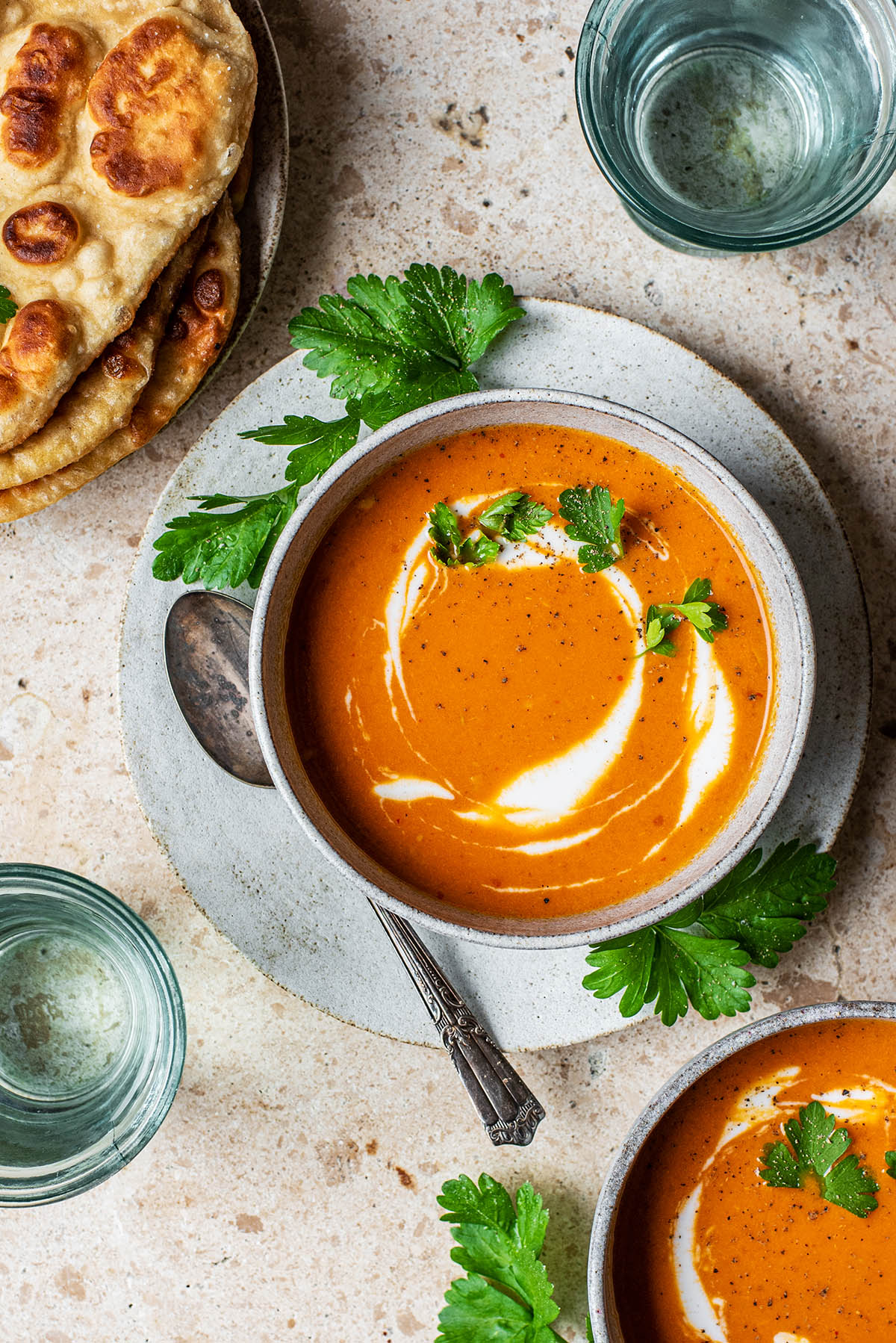 This fantastic spicy tomato soup is inspired by South Asian flavours, with loads of spice and coconut milk for creaminess instead of heavy cream. It’s a bit of a departure from the classic tomato basil soup, but I promise it’s a good one.

If you have a cold, you should eat this soup. I know many people swear by chicken noodle soup (or chickpea noodle soup!) when they’re sick, but there’s a lot to be said for something spicy when you’re feeling poorly.  We make this every time one of us is sick – Graham swears by it, and it’s one of the few soup recipes he knows. It’s easy to eat, as it’s pureed but not thick, great for a sore throat.

The soup is packed with plenty of cold-fighting ingredients like garlic, ginger, and turmeric, and it always helps. The hot pepper may also hurt your lips if they’re cracked, so go carefully.

That being said, it’s not as though you need to be sick to have this soup. It’s a great pantry recipe, using just canned tomatoes and coconut milk, vegetable broth (or water!), and spices.

As is, it’s a great healthy tomato soup that’s easy to make year round. If you want to use fresh tomatoes instead, try to leave them on the counter until they’re almost too ripe. The sweeter, the better.

Use about 500 grams (1 pound) of tomatoes. Cut the fresh tomatoes into chunks and add them when you would the canned, then follow the recipe as written. It is a really lovely soup in late summer when tomatoes hit their peak.

You could also try adding a couple of slow roasted tomatoes before blending this up, for a bit more sweetness and concentrated tomato flavour. Serve it with a side of spelt naan or overnight bread and some red lentil patties to make a full meal.

Or, just go with the classic, good old bread and soup. Even better, with grilled cheese sandwiches! I also sometimes blend some chickpeas, red lentils, or white beans into this creamy tomato soup to increase the protein content – you don’t really notice them – but if I’m really sick I prefer it as is.

Since it’s such a basic recipe, with only five main ingredients outside of spices, I am hesitant to include my normal substitutions list. There are a few things you can switch up though.

Because I want to keep things really simple for a recipe I rely on mostly when I’m sick, I have only included a couple of main spices: turmeric, cumin, and fresh ginger. If you want to take it up a notch, add some coriander, cardamom, fenugreek, whatever spices you really love.

If you’re not vegan, heavy cream can be used in place of coconut milk, though the coconut adds a nice subtle sweetness that I recommend. I have made it with oat cream as well. It is an excellent vegan creamy tomato soup as is, and you won’t miss the cream!

If you make this Vegan Tomato Soup or any other soup recipes on Occasionally Eggs, please take a moment to rate the recipe and leave a comment below. It’s such a help to others who want to try the recipe. For more OE, follow along on Instagram, Facebook, and Pinterest, purchase the Occasionally Eggs cookbook, or subscribe for new posts via email.

* To measure the broth or water, simply fill the can from the tomatoes. This will also help to rinse out any remaining tomato from inside the can. • To make this with fresh tomatoes, sub in about 500 grams (~1 pound) of fresh for canned.

This recipe was originally published in August 2015. It has been updated most recently as of June 2021.