May 19, 2019 by Alexandra Daum
This vegan curried potato salad is made with spicy roasted potatoes, using turmeric, cumin, and cayenne pepper. The potatoes are mixed with greens, beluga lentils, cilantro, and topped with a lemon ginger dressing. It might seem like a lot but this is one special potato salad (and no mayo)!
Jump to Recipe 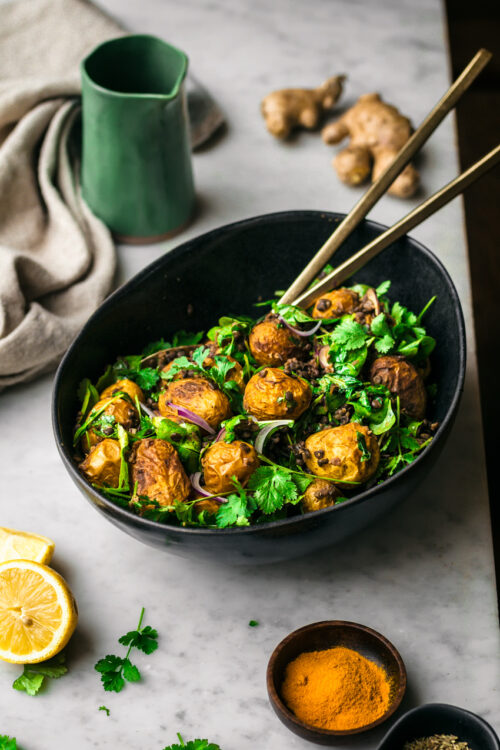 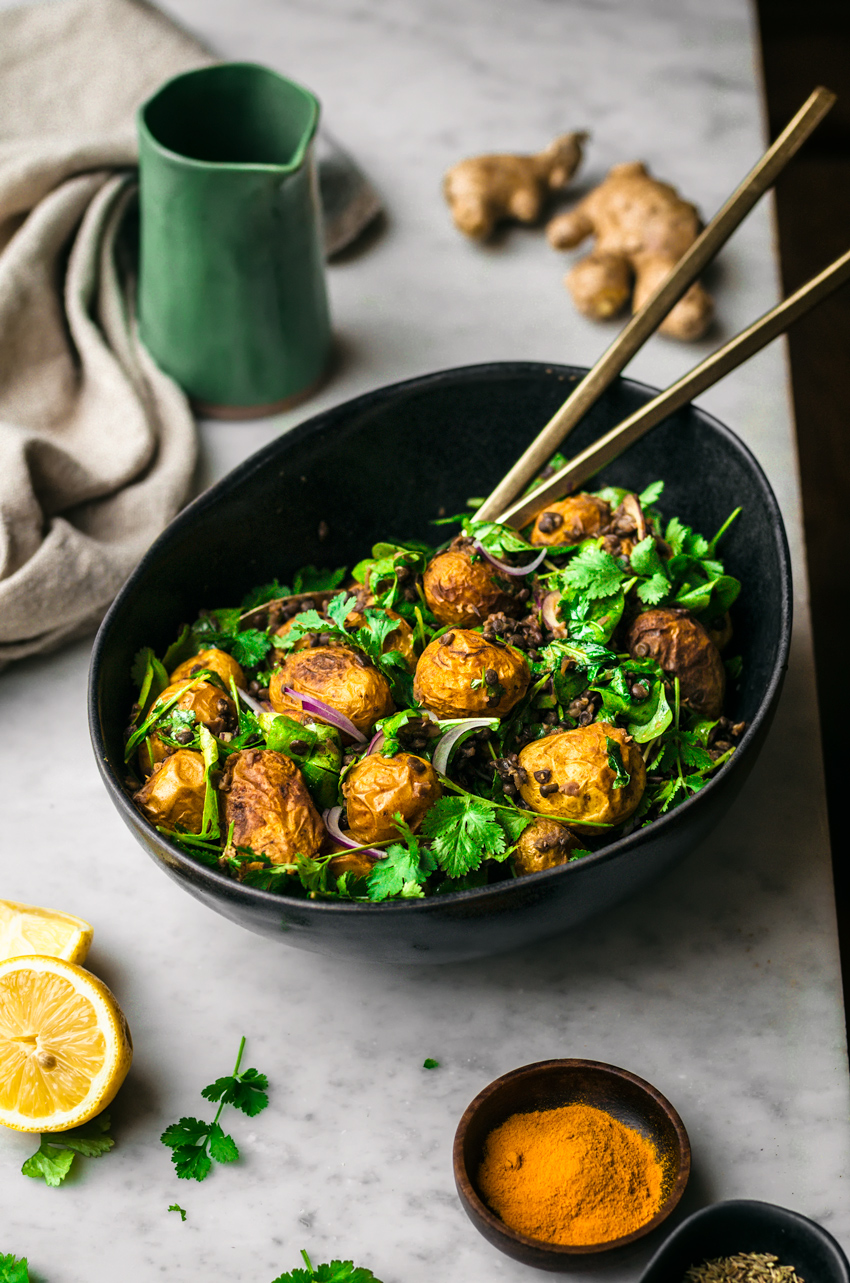 Cool thing about this recipe: the greens and cilantro came from our garden! If anything, I now have too much rucola and cilantro, and I don’t love cilantro, you know? I guess it’s supposed to be a love/hate thing but I only kind of like it. In this curried potato salad, yes. In most other things, no thanks.

The plan is to do a garden update at the end of the month to talk about what’s been happening for the month of May. But right now, there are just piles of greens – the spinach has already bolted despite the weather hovering below 15C during the day, and everything else is just getting established. I ended up chopping the cilantro right down today and using it all in falafel to try to keep it from going to seed.

Other house news! The drill broke and has been sent to Germany to be checked out, so this week was a drill-free week. Keeping the neighbours happy over here. After a two month run-around by the city, we finally got a big bin for the renovation garbage, and the majority fit in there. That freed up a corner of the garden that had been full of junk and that’s going to become a small seating area now.

Until the drill gets back, we’ll be clearing out more of the garden and getting more planted. A bit late since it’s been so cold but it’s mostly just tomatoes and a few later season seeds now. For the time being, I’m just happy to have lettuce a few steps from the kitchen.

We’ve been eating a lot of strawberry salads but I’m more excited for later in the season – I have everything planted for this Mexican-inspired lentil salad that was made with produce from my mom’s garden last year, and fingers crossed it all grows in this chillier summer climate! 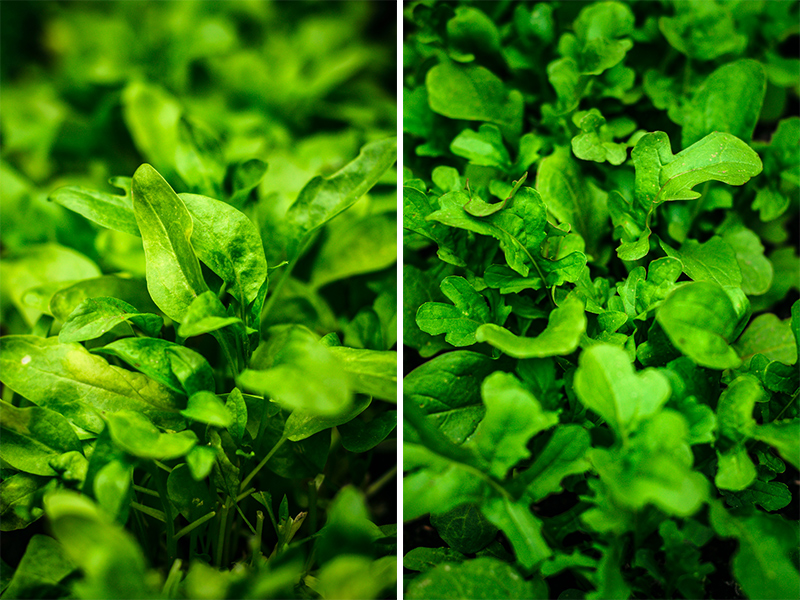 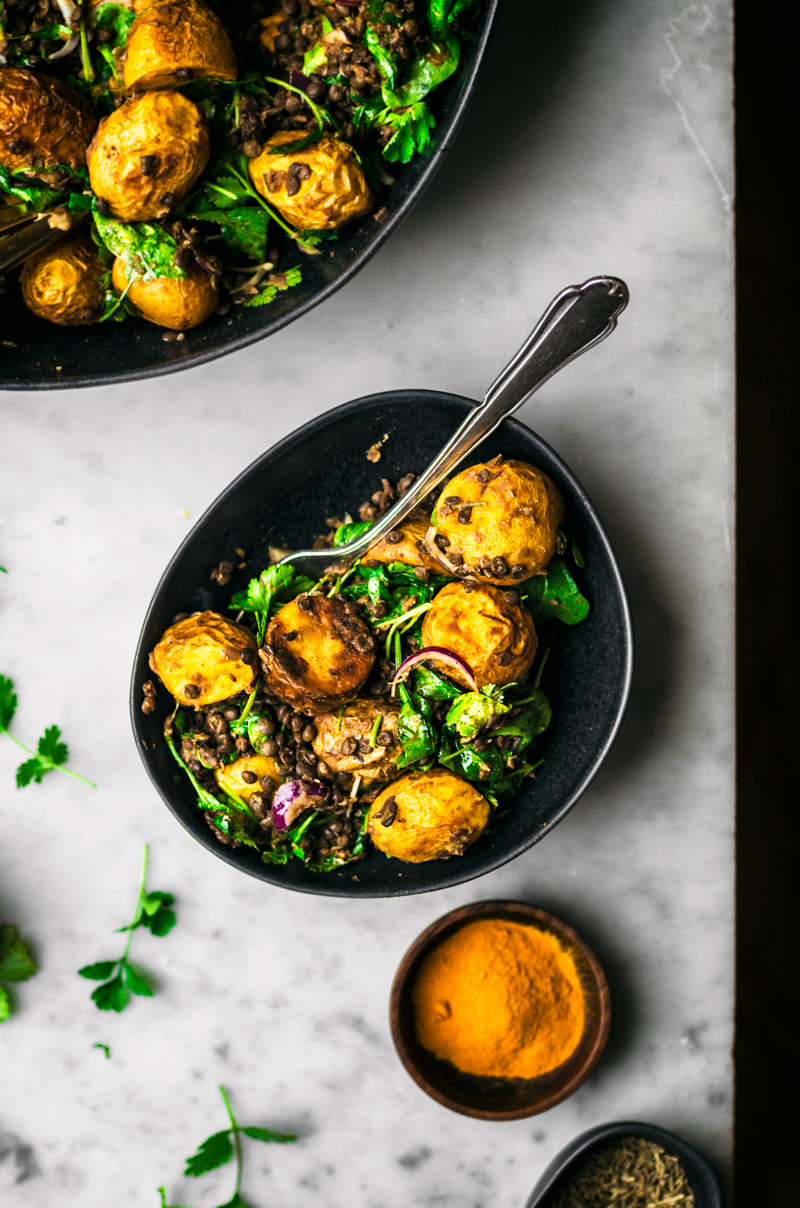 This spicy potato salad is adapted from my more classic roasted new potato salad, also with lentils and greens. I had tried a version of this years ago with sweet potato and had been a bit invested in this using sweet potatoes, but I don’t love it. They get soft throughout rather than having a crispy exterior, defeating the purpose of roasting instead of boiling.

In this case, new potatoes are roasted with cumin, turmeric, and cayenne pepper, then topped off with more spice in the form of a ginger vinaigrette. I was slightly concerned early on that it would be too much. It isn’t. Surprisingly, it’s a bit on the subtle side, and blends well with the cilantro and beluga lentils.

A small amount of very finely sliced red onion makes all the difference here. If you’re very sensitive to raw onion, either soak it in ice water for half an hour before mixing with the salad, or leave it out if you must. Sweet onion, or green onions, would be a good substitution. 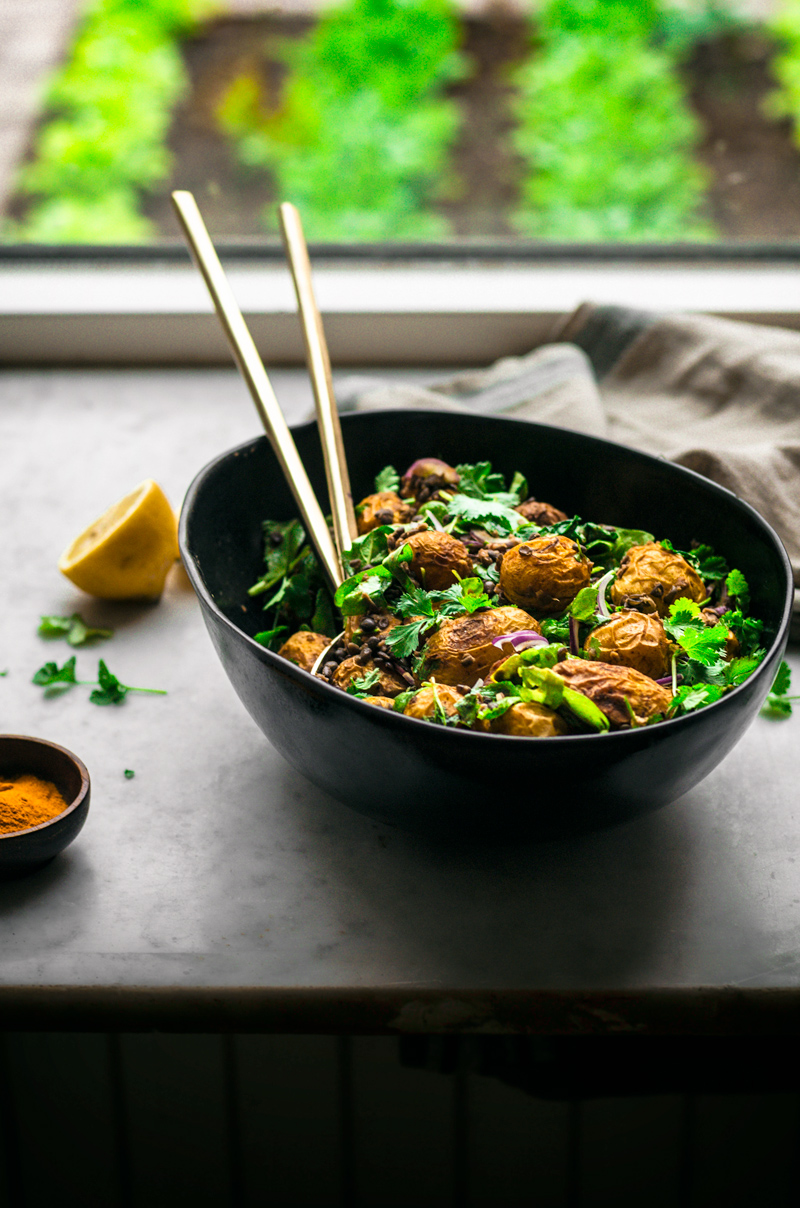 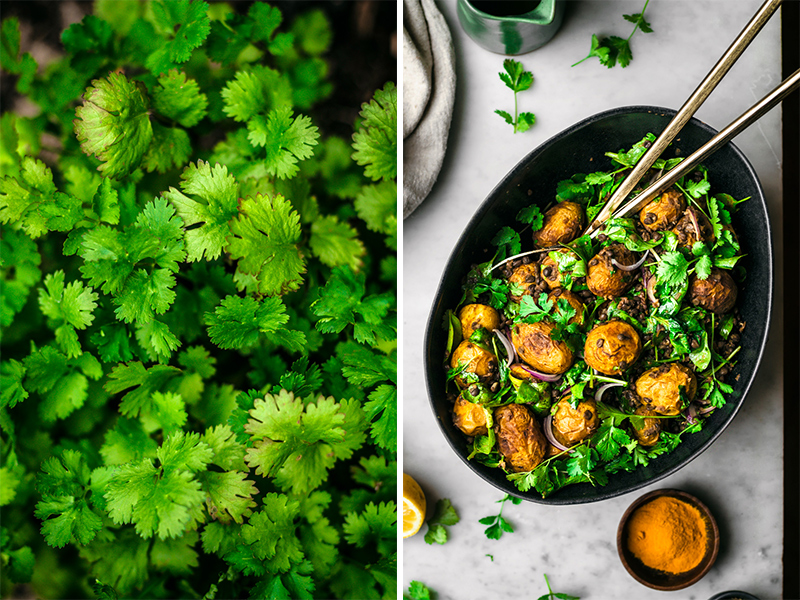 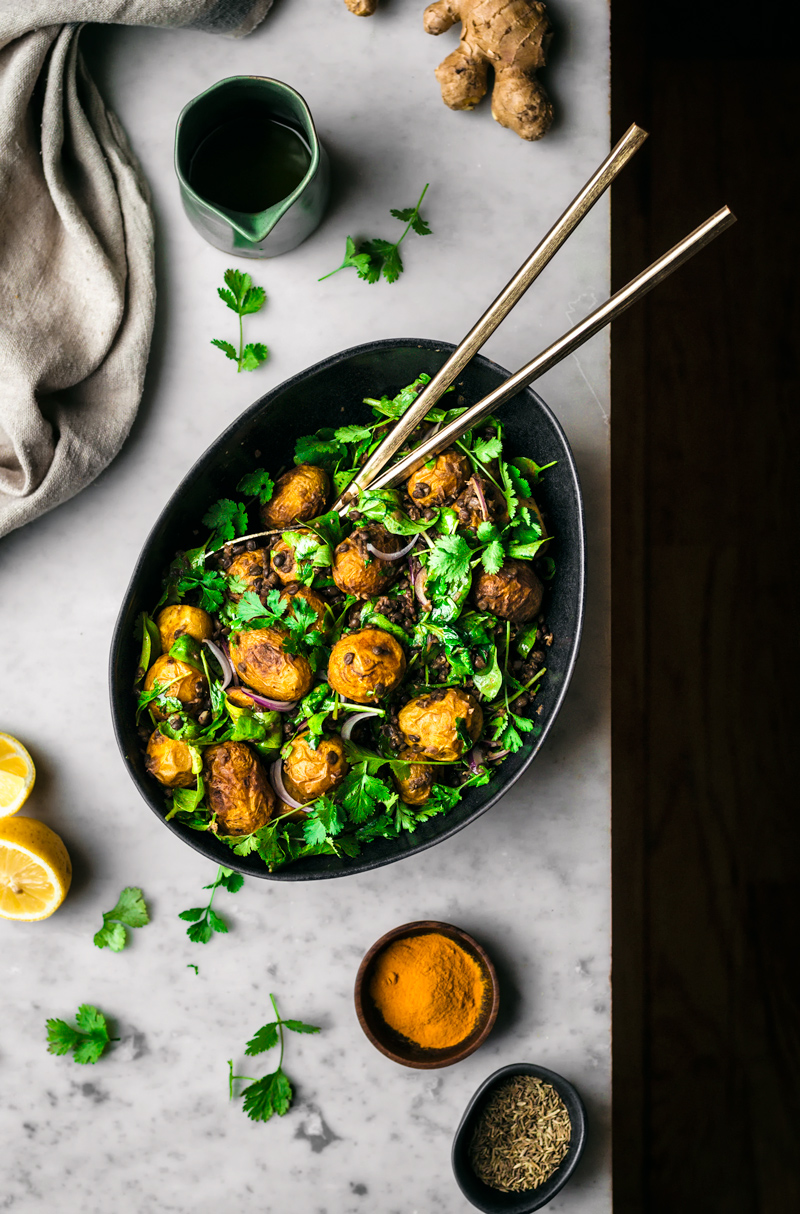 Beluga lentils can be a bit tricky to find, but regular brown or green lentils are also fine. Black lentils hold their shape after cooking and add a pleasant texture to this salad. (They also make it into a full meal, which is nice.) They’re also the prettiest option if that’s important to you.

The potatoes need 30 minutes to cook, and if you have lentils cooked already or make them while the potatoes are in the oven, this can be on the table in just over half an hour. Pretty good for a weeknight meal, especially in busy spring and summer months.

So if you want a potato-heavy, still pretty healthy main, whip up a bowl of this vegan curried potato salad. It’s like eating spicy french fries but with greens and plant protein mixed in, so you can feel good and still have your comfort food. 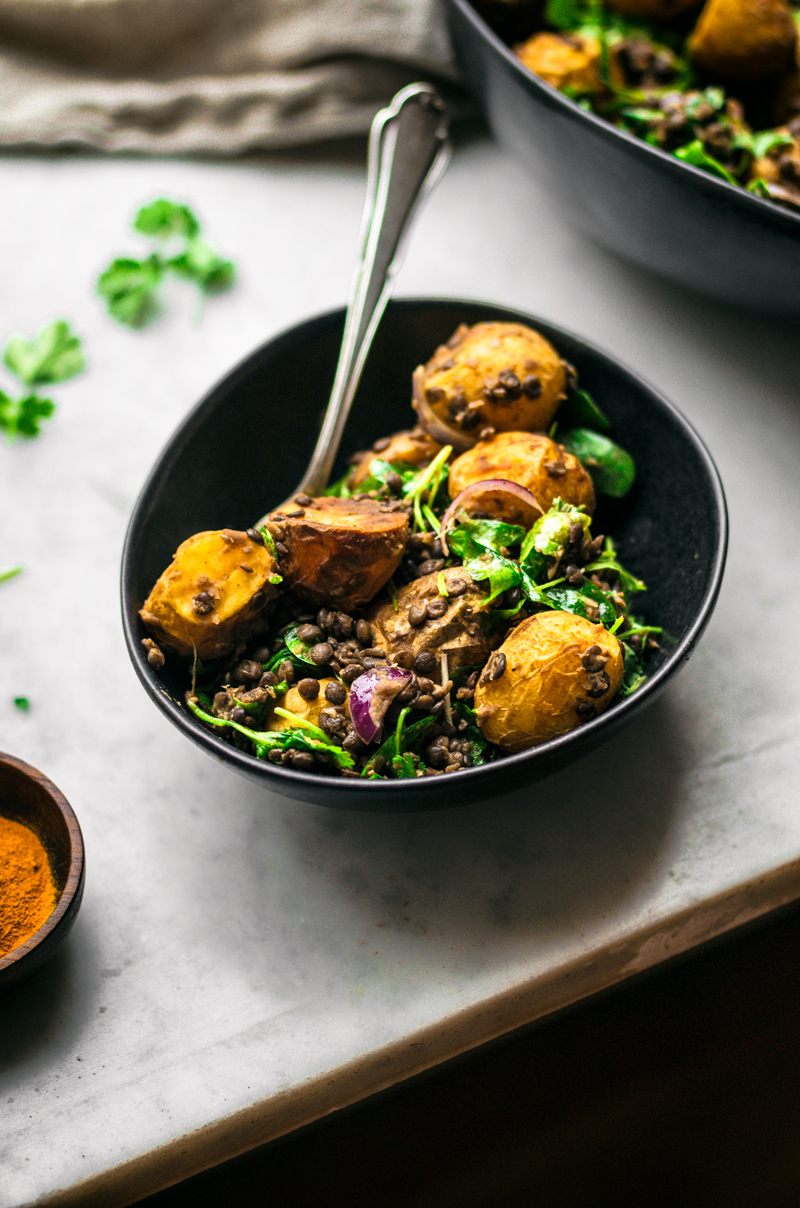 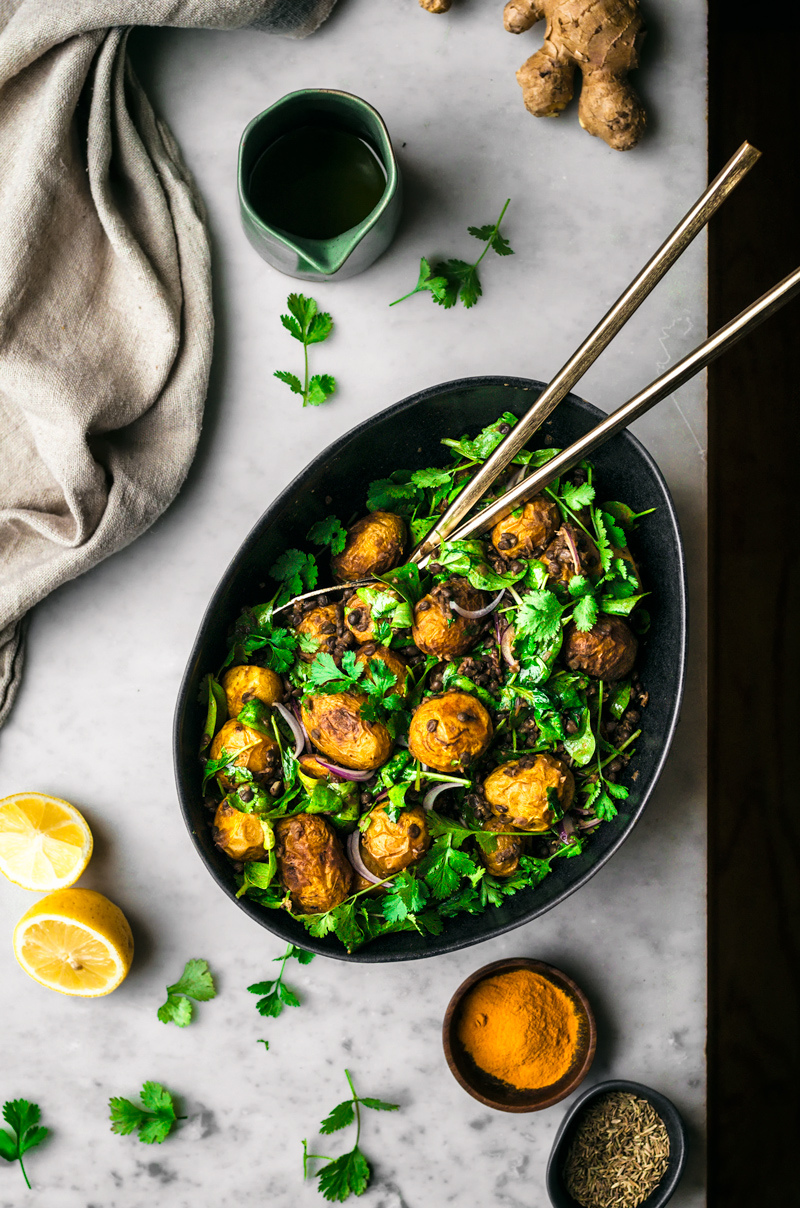