January 12, 2019 by Alexandra Daum
A simple vegan Moroccan chickpea stew with sweet potato, kale, and plenty of warming spices. Serve this healthy stew with raisins and pomegranate over a little rice for an easy, cozy weeknight dinner.
Jump to Recipe 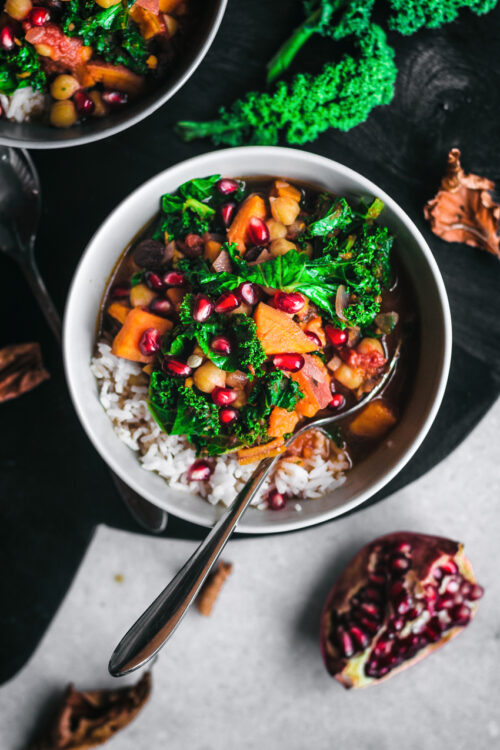 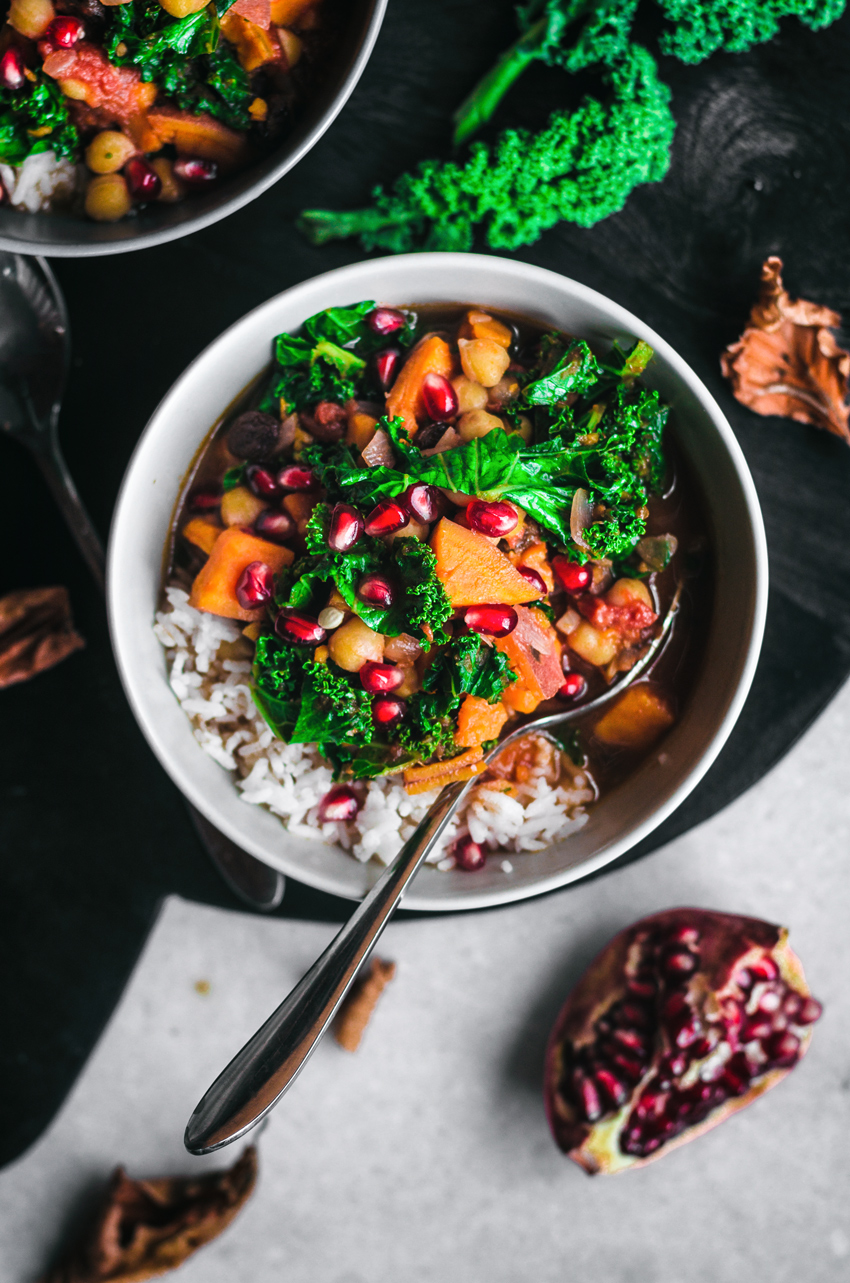 Life update: we moved to the Netherlands, and now we’re in the [frustrating] process of renovating! Our house was built in the mid-50s and has some lovely details like original blue carpeting. Previous owners had done renovations that we’ve had to rip out, like plastic panelling covering mould due to shoddy building work. Everything is moving forward now, and it feels like we’re on the right track.

High on the list (apart from a functioning shower) is the kitchen, because right now I’m working on a very old school, finger burning cooktop and the fridge is in a different room due to electrical capacity. Since we ripped out the plastic in the kitchen there’s also no insulation and the oven hood has been moved several times, without filling in the leftover giant holes in the wall, so it’s a little draughty. Glam life, am I right?

I’ve been taking some pictures and the plan is to share some renovation stuff in a separate area of the blog when it’s all done. We’re keeping things as eco as we can, given the small budget, with things like clay plaster and cork. Despite all the moving pains, we’re just happy to be in our own place after 8+ months. 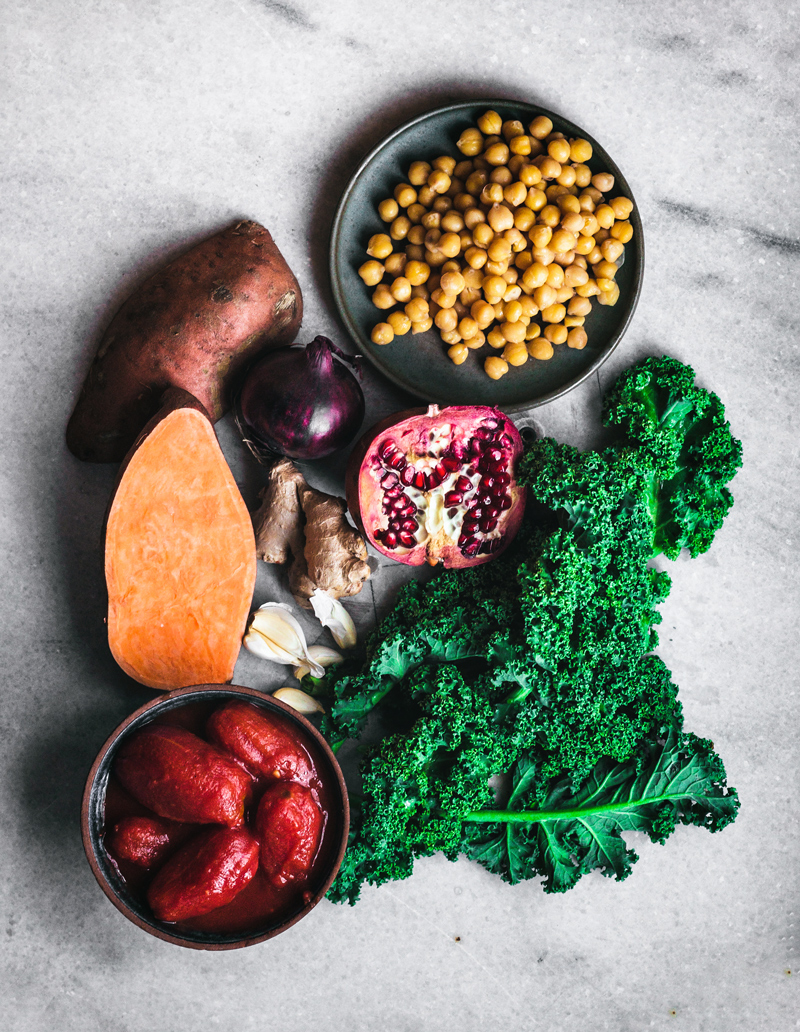 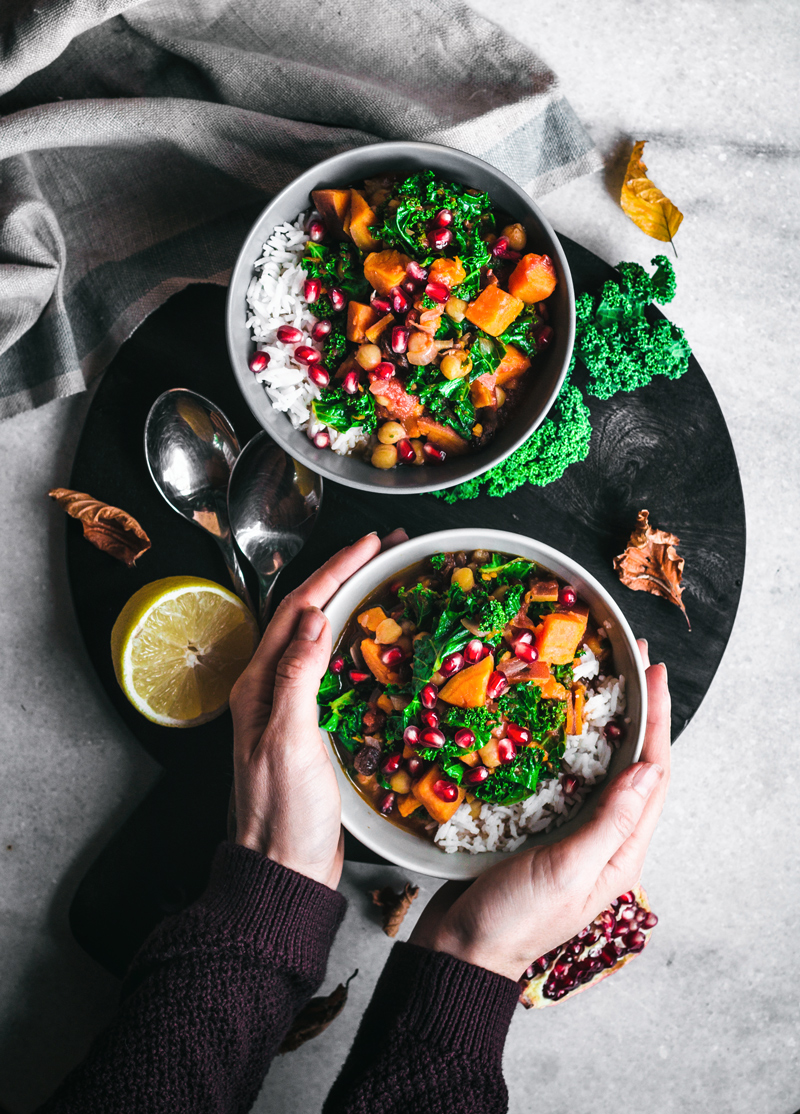 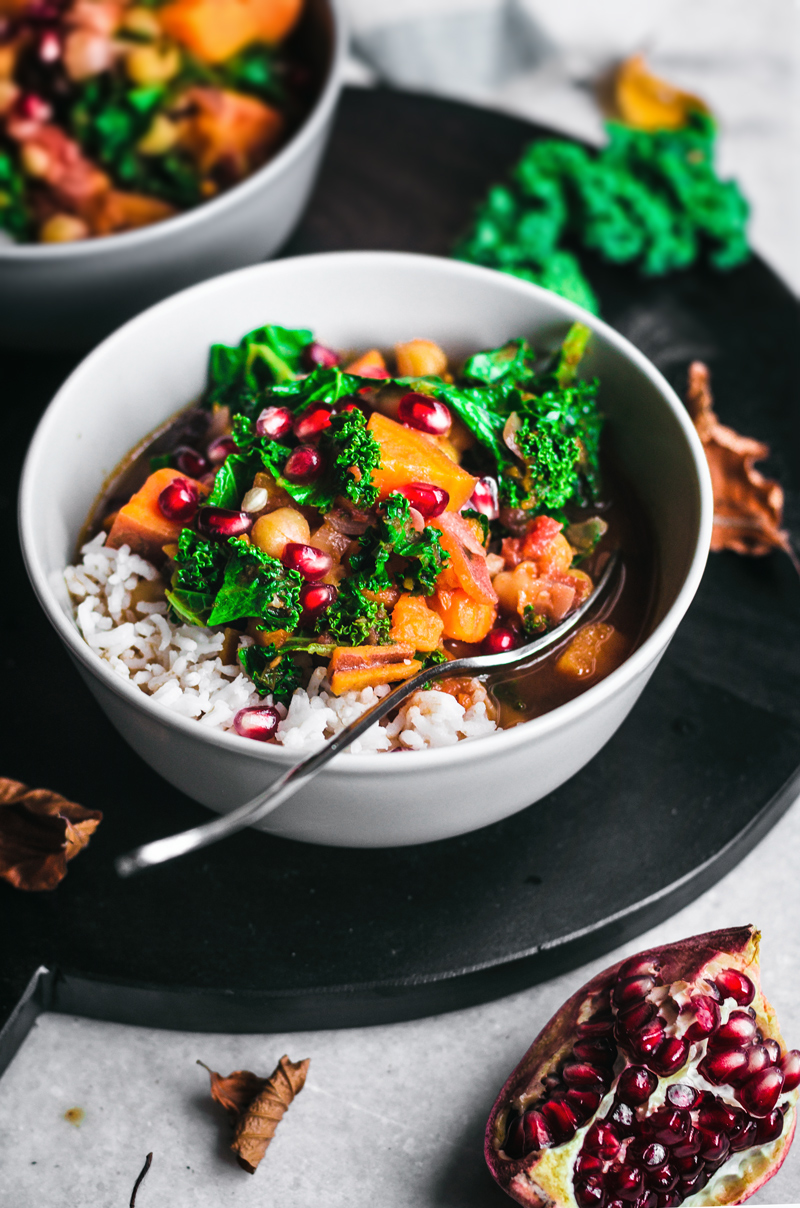 Since we moved and have been renovating since, I haven’t shot any new recipes for the past couple of weeks. This Moroccan chickpea stew was photographed before Christmas while we were housesitting, but it’s one I’ve been meaning to share for a long time.

I’ve been making this (and this lentil and potato stew, and this chickpea noodle soup) a lot since we moved, because we don’t have an oven, hah. Life is a dark void without baking. Someone please make this saffron wreath bread and send me a picture so I can live vicariously through you, because I am craving.

I make this kind of cozy stew all winter long, either with rice or some healthy naan (because you don’t necessarily need a curry to serve naan, right?). So I used white rice for these pictures because I didn’t have brown at the place we were staying, but even though it’s awesome, we always go for whole grain, so that’s what I’ve listed in the ingredients. 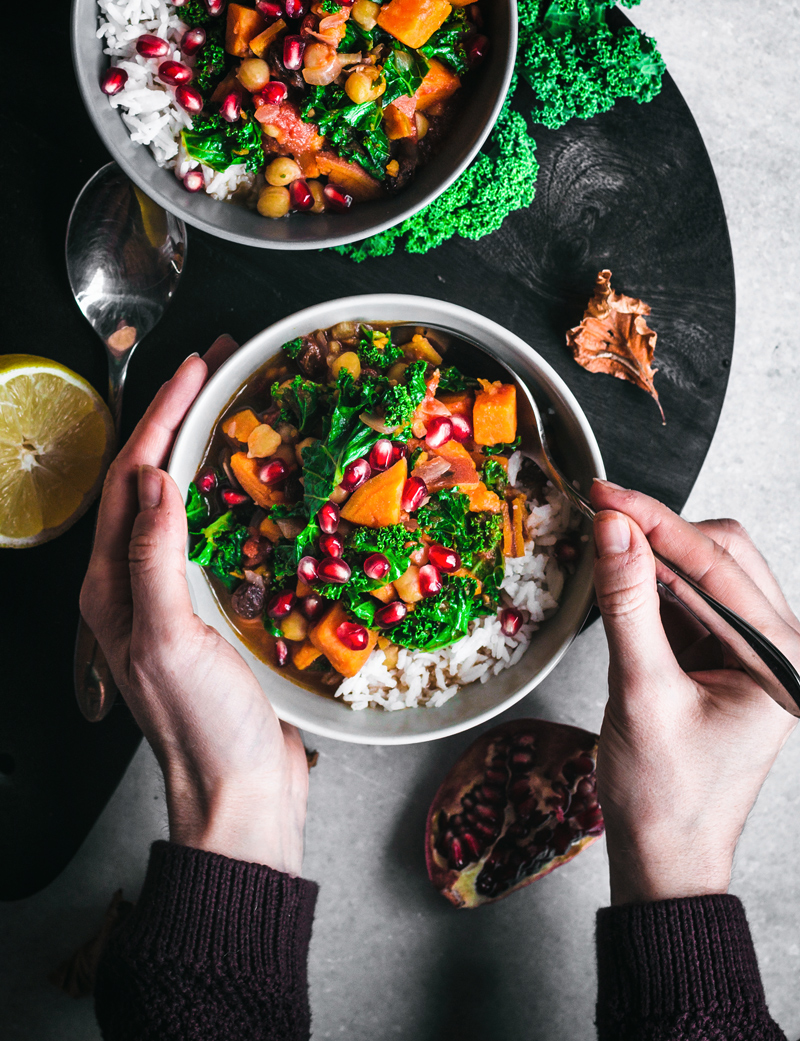 It’s made mostly with pantry staples, like cooked or canned chickpeas, canned tomatoes, and sweet potato. I used fresh kale here but frozen is just as good, and you could also switch in spinach, chard, or rucola. A couple things that won’t work – crushed tomatoes, powdered ginger, and regular potatoes in place of sweet potatoes.

The trick to take this recipe over the top is to add raisins and pomegranate to the mix – the raisins add a little chewy sweetness, and the pomegranate gives it a tart pop. Really, just toss a little pomegranate on anything and everything when it’s in season, because it makes everything better.

If you’re looking for some more healthy vegetarian dinner recipes, take a peek at my last post! I shared 20 of my favourites, and this Moroccan chickpea stew fits right in there. 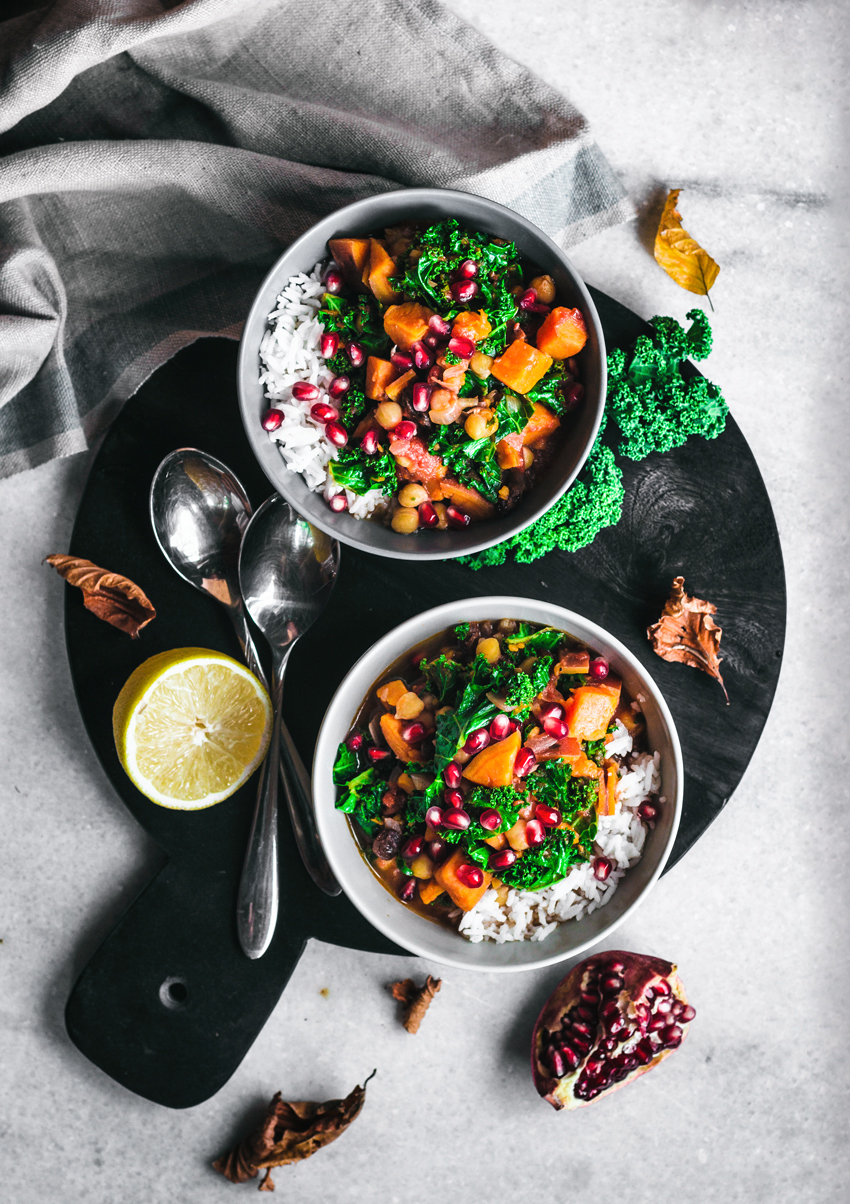 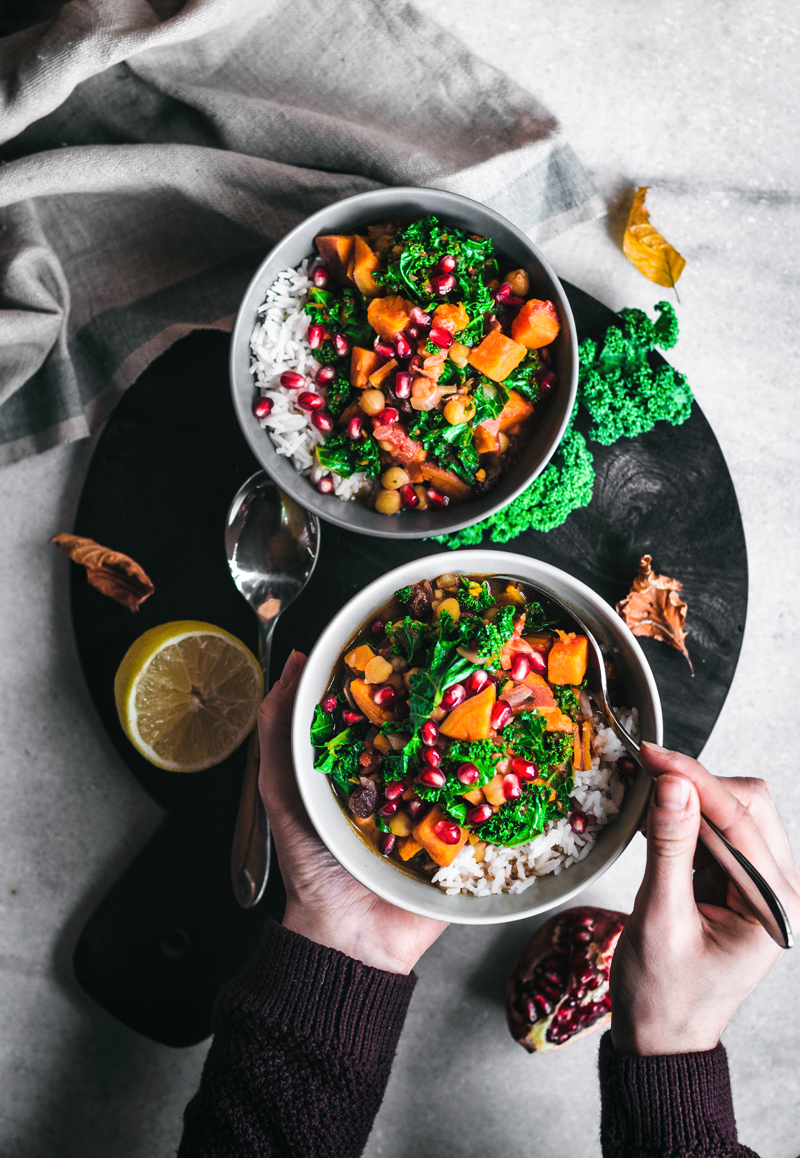