October 12, 2020 by Alexandra Daum
Sweet potato latkes, or potato pancakes, made with chickpea flour and plenty of spice. These are gluten free, optionally vegan, so easy, and perfectly crisp.
Jump to Recipe 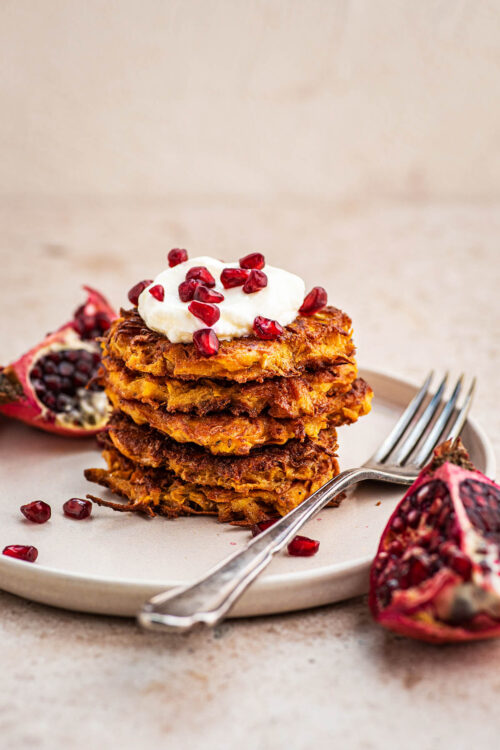 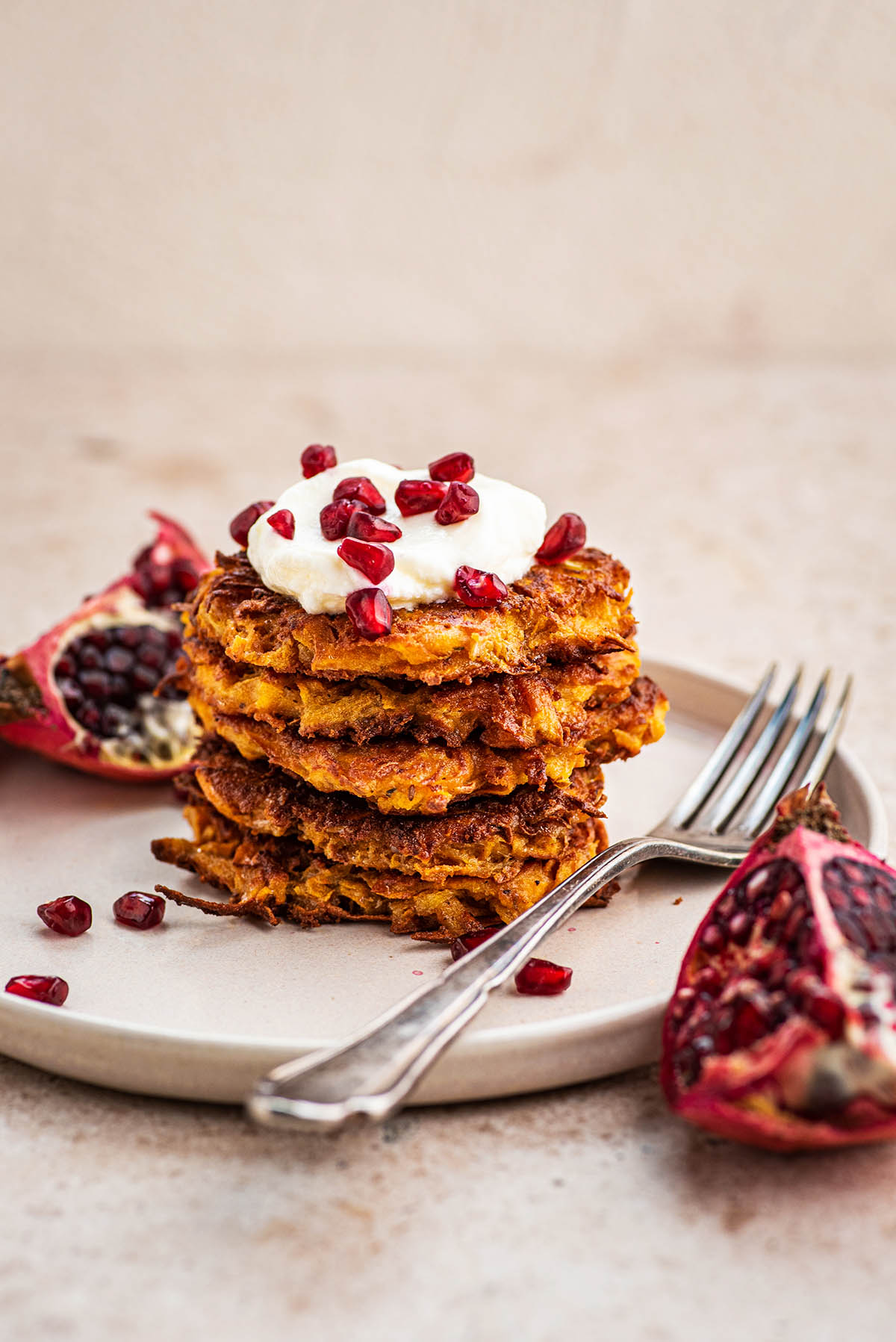 I grew up eating latkes, usually when my mom worked a long day and needed a quick dinner for my sister and I. She made German potato pancakes (kartoffelpuffer) but always called them latkes in English, and I don’t think she ever used sweet potato. She did sometimes mix in other veg like carrots, so this is just a slight variation on that, really.

Sweet potato latkes are a little different from those made with starchy potatoes, mostly in that the texture is slightly different. These do (optionally) use egg, which helps with the crispiness factor, but the key thing is to use a hot pan and the right oil.

You can make these really quickly if you have a large pan, or can have two pans going at once. Top with applesauce (traditional), yogurt, or ketchup if you want to go crazy. My omi does not approve of ketchup on latkes but I like it every once in a while – a side effect of growing up in Canada!

Shred the sweet potato and onion into a large bowl, using the large side of a box grater. You can also use the grating attachment on a food processor if you prefer.

Add the chickpea flour, egg (or water for the vegan option), oil, vinegar, and spices. Stir very well to combine, making sure no streaks of flour remain. Set the latke mixture aside while the pan heats – this allows the chickpea flour to absorb the water from the vegetables.

Heat a skillet over medium heat. Once the pan is hot, add enough oil to cover the bottom of the pan fully with a thin layer of oil. Place about 2 tablespoons of the latke mixture into the pan for each latke, flattening with the back of a spoon. Don’t crowd the pan – this causes the pan to cool too quickly.

Repeat until all of the batter has been used, either serving the latkes as they cook, or placing them into a warm oven to keep warm. Serve hot, with any desired toppings.

I’ve never put my latkes onto a paper-towel lined plate after cooking them. I also don’t have paper towel in the house. You shouldn’t need to do this unless your pan is too cold, as if it’s the correct temperature, the latkes shouldn’t be absorbing much of the oil and they shouldn’t be greasy.

Some readers have noted that the batter is too wet for them – this is for a couple of reasons. One, chickpea flour soaks up a lot more water than other types of flour (like wheat flour) so if any changes have been made in that regard, the batter will be wetter. Chickpea flour also varies a bit from brand to brand.

The other is sweet potato types – some are drier than others, and the water content tends to be higher when they’re out of season. If your batter is too wet – refer to the step-by-step photos – then simply add more flour.

To make these ahead of time, you have a couple of options. The batter can be made they day before and refrigerated in a sealed container to be cooked the next day.

Alternatively, the cooked latkes can be stored in the refrigerator and reheated in a frying pan (don’t microwave them!). I’ve never tried freezing them but I don’t see why it wouldn’t work, they’d just need longer to reheat from frozen.

To make these vegan, simply leave out the egg and add the water instead. They’ll still hold together and fry well without an egg (thanks to the chickpea flour) but they’re not as crispy without it. These options are noted in the recipe card.

If you don’t have chickpea flour, you can use wheat flour (whole wheat is best) or buckwheat flour. You will need a little bit more to balance out the absorbing factor, so go by look. The cooking time will change slightly.

The obvious substitution is regular potatoes, of course. You can do half-half if you prefer a more traditional tasting latke.

• To make vegan latkes, leave out the egg and use 2 tablespoons of water instead. They are slightly less crisp (see notes on this in the post) but still very good. • The mixture might be on the wet side depending on the density of your sweet potato. They should come together and crisp up as you fry them, but you can add more flour if needed. • It is very important that the pan is hot. The latke mixture should sizzle as soon as it hits the pan and cook very quickly – if it’s taking ages, you need to turn up the heat (a cold pan = greasy latkes).

This post was originally published in January 2018. It has been updated with new step-by-step photographs, changes to the text, and some slight alterations to the recipe, as of September 2020.