April 16, 2020 by Alexandra Daum
This healthy strawberry rhubarb cobbler is vegan, made with coconut oil, coconut sugar, and spelt flour. Minimally sweetened and with simple ingredients, it's a nice lighter spring option, especially served with a scoop of ice cream.
Jump to Recipe 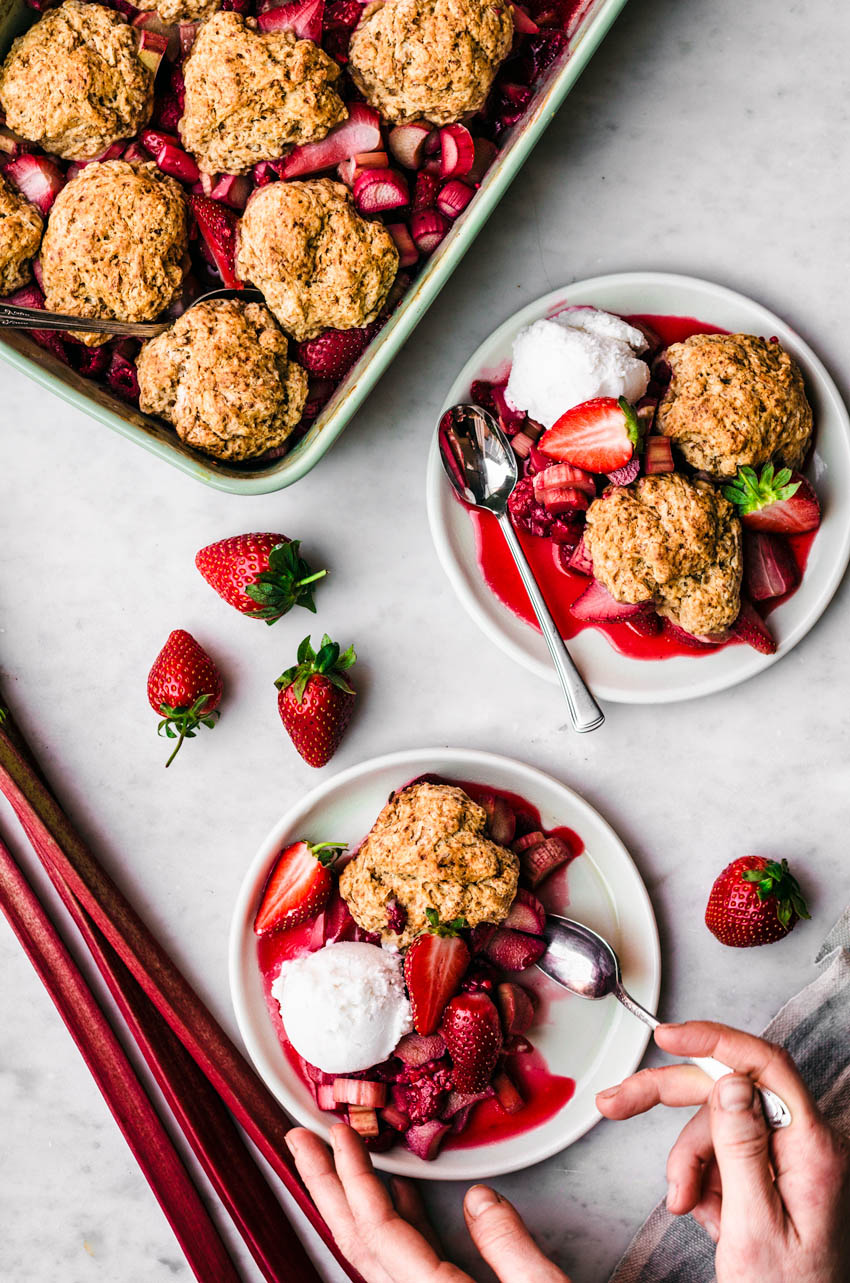 This post was originally published in May 2019. It has been updated with improvements to the text and recipe as of April 2020.

Cobblers are super easy, almost as simple as a crumble, and very adaptable. This one has a strawberry rhubarb filling with a handful of raspberries thrown in for good measure (the pinker the better). Just a couple tablespoons of maple syrup or honey sweeten the whole filling.

Rhubarb is in season from late March right through to late June, depending on where you live, and it’s arguably the best thing about spring. It’s certainly one of the first things to come up and makes a great dessert! If you love rhubarb too, here’s a handy collection of healthy rhubarb recipes.

Serve this strawberry rhubarb cobbler warm with a scoop of coconut milk ice cream for a pretty spring dessert, or skip the ice cream and have some for breakfast! Great either way and good with coconut whipped cream, too.

What exactly is a cobbler?

A cobbler is essentially biscuits baked on top of a fruit filling – it’s quintessentially American and very popular in Canada, too. Depending on where you are, it might mean something like this recipe or something rather more pie-like and varies by location.

In this case, the biscuits are more like scones, made with spelt flour, again just two tablespoons of coconut sugar to sweeten, a little coconut oil, and oat milk. They come together in one bowl without any special tools, just your hands. These are adapted from my vegan cream scones, minus the bergamot and with a lighter milk instead of full-fat coconut.

How to make the cobbler

Mix the fruit base in the baking dish with the sweetener and thickener, make the scones, pop them on top, and bake for 40 minutes. That’s it. As the topping is made with the most practical of all tools – your hands – there’s very little to wash up and it comes together in the blink of an eye.

This is basic enough to make with small kids (biscuits are the most fun), or for older children to try on their own. A cobbler was one of the first things I baked by myself even though I’m not sure my mom has ever made one. I definitely do more of a British version, with a scone topping, rather than American style.

After baking, the filling should be sweet, soft, and bubbling. The topping should be golden brown and slightly crisp on the outside. Since this is so lightly sweetened and easy on spice, with just vanilla, the flavour of the fruit really shines. It is a bit tart due to the rhubarb but I find it sweet enough for my taste.

If you have a particularly strong sweet tooth but still want to try this recipe, double the maple syrup in the filling and/or add more sugar to the scones. You’ll have to decide on how much sweetener to add to the fruit based on how sour your rhubarb is, too, because it does vary.

All-purpose flour can be used in place of spelt for the topping. I haven’t tried to make these gluten free but Alanna has a nice GF blueberry cobbler recipe. If you need, I’m sure those biscuits could be done with vegan butter and yogurt and used over this filling. You can also pivot to making this gluten free strawberry rhubarb crisp instead.

Maple syrup and honey are used interchangeably in most of my recipes, but vegans sometimes send me unhappy messages about that. If you’re baking for a vegan person, don’t use honey, obviously. Cane sugar can replace coconut as well as in the filling if you don’t have a liquid sweetener. (Though both maple syrup and honey add very nice flavour notes!)

Gluten Free Strawberry Rhubarb Crisp – with chickpea flour!
Rhubarb Almond Tart (GF)
Ginger Rhubarb Muffins
Rhubarb Crumble Cake with a yeasted base
Rhubarb Almond Cake
Or go the giant scone route with this strawberry scone cake instead of topping a cobbler with them.

* This is the baking dish I use (pictured). It’s 30x20cm. Slightly larger or smaller, or a different shape, will also work, as long as the scones cover the whole dish with some fruit peeking through. • If you are a stickler, you might notice that there are actually eleven scones on my cobbler. I screwed it up and added an extra tiny scone, see in the bottom left corner?