May 31, 2016 by Alexandra Daum
An easy, healthy vegan rhubarb tart with almond & kamut flour, maple syrup, and pistachios. The simple press in base makes it so easy to put this together.
Jump to Recipe 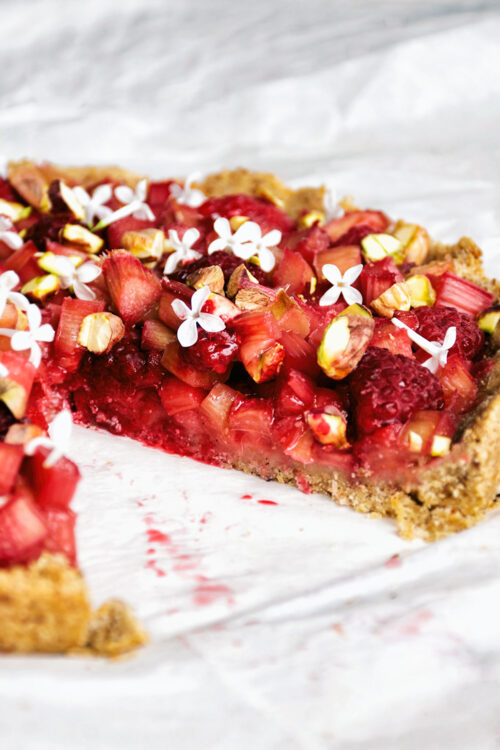 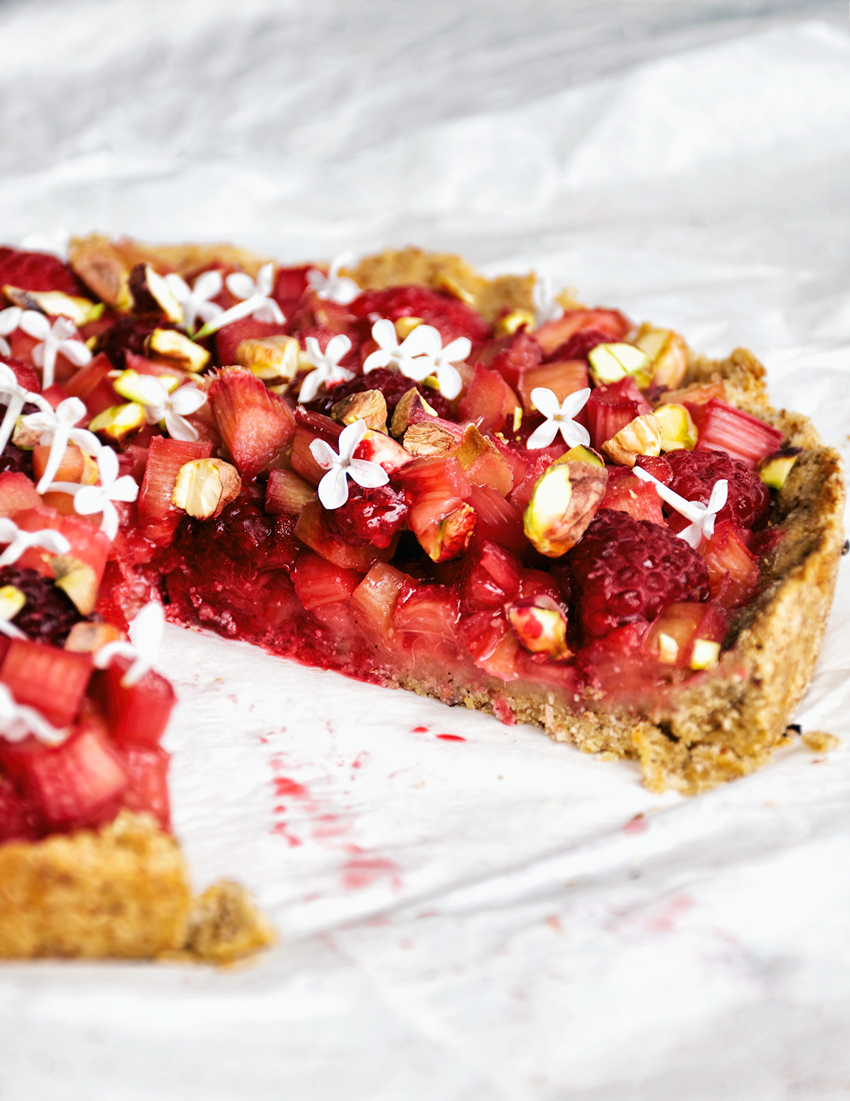 Everything is growing a little bit earlier than usual this year. We had a mild winter and warm spring, which means that we’re not as behind other areas for the start of the growing season. The first thing to come up is always rhubarb. There are a couple of large rhubarb plants in my mom’s garden, and we harvest them well into July.

If you’re not really familiar with rhubarb, it’s a vegetable that’s often used in pies and other sweet desserts, usually with loads of sugar to of offset its natural tartness. This vegan rhubarb tart, on the other hand, is sweetened with maple syrup and the almond in the crust. I grew up eating rhubarb every spring, usually in cakes and crumbles. Yeasted rhubarb cake is a family favourite with my omi, mom, and me (sort of like German plum cake). 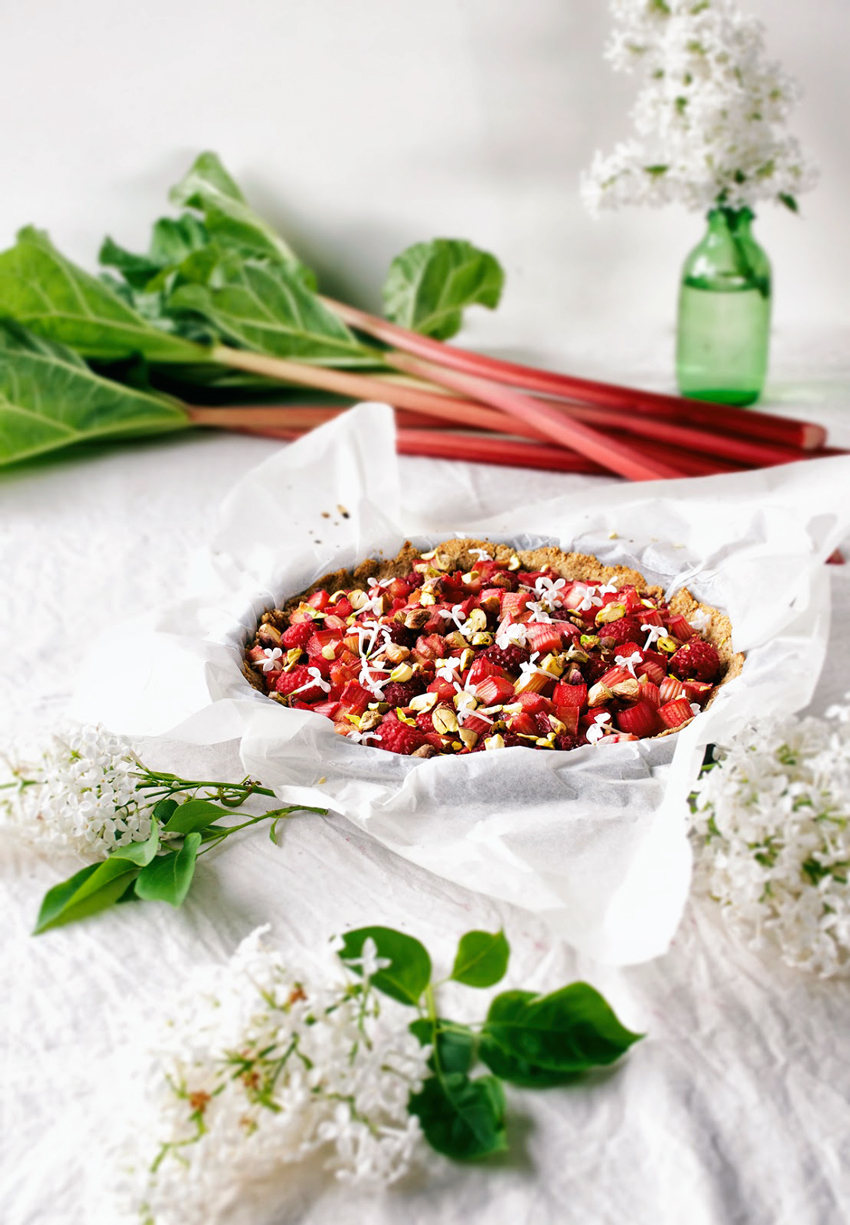 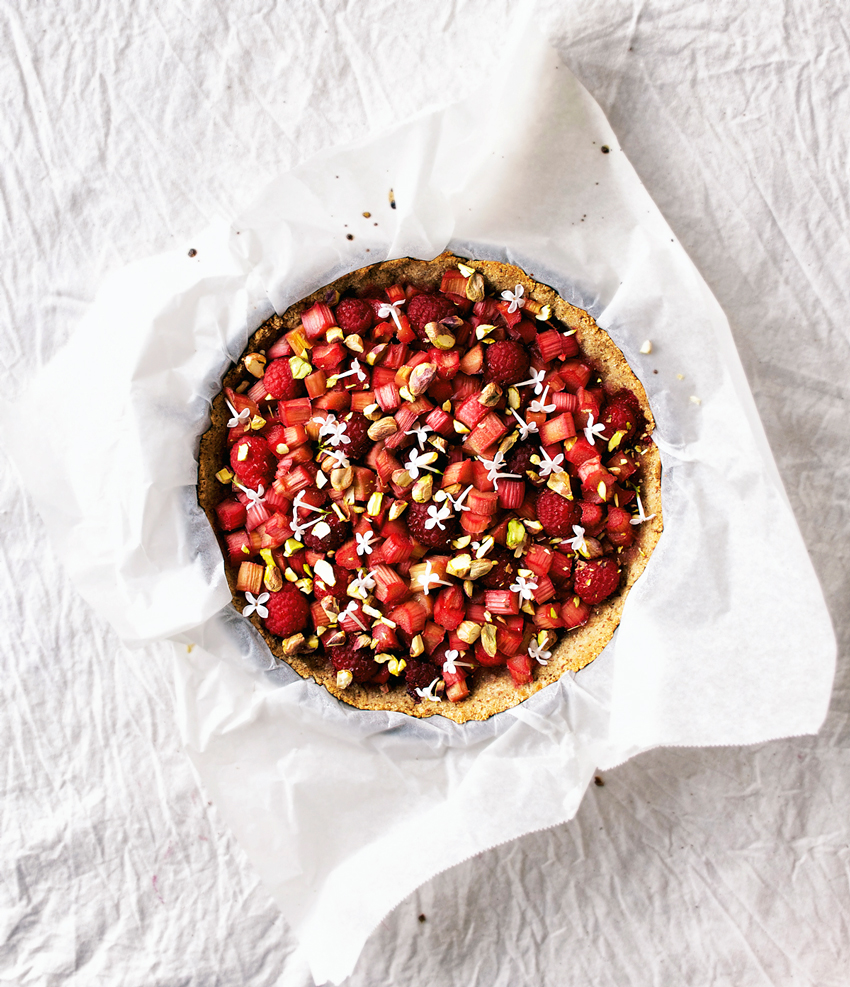 I wanted to share a recipe that was a little more simple and easygoing than a yeasted dough, because I know working with yeast can be intimidating for people who haven’t done it before. This tart was made without a tart tin, too, because all I could find was a giant flan pan.

My mom tells me it’s because we’re German, not French, and it’s called Boden (which just means ground so I don’t know what’s up there), not flan. So if you don’t have a tart tin don’t worry about it, you don’t need one. It’s a press-in dough, so no rolling. It tastes better than a regular crust, too.

This vegan rhubarb tart is made with almond meal in the crust, which adds a nice richness to a recipe without much added fat. The crust is a little bit crumbly, sort of like a shortbread, but it doesn’t fall apart when you cut it. I added very little sweetener in this recipe overall, and it’s just mildly sweet, but you could add a little bit more to the rhubarb filling if you prefer.

If you can’t get rhubarb, this recipe would be lovely with berries or stone fruits. 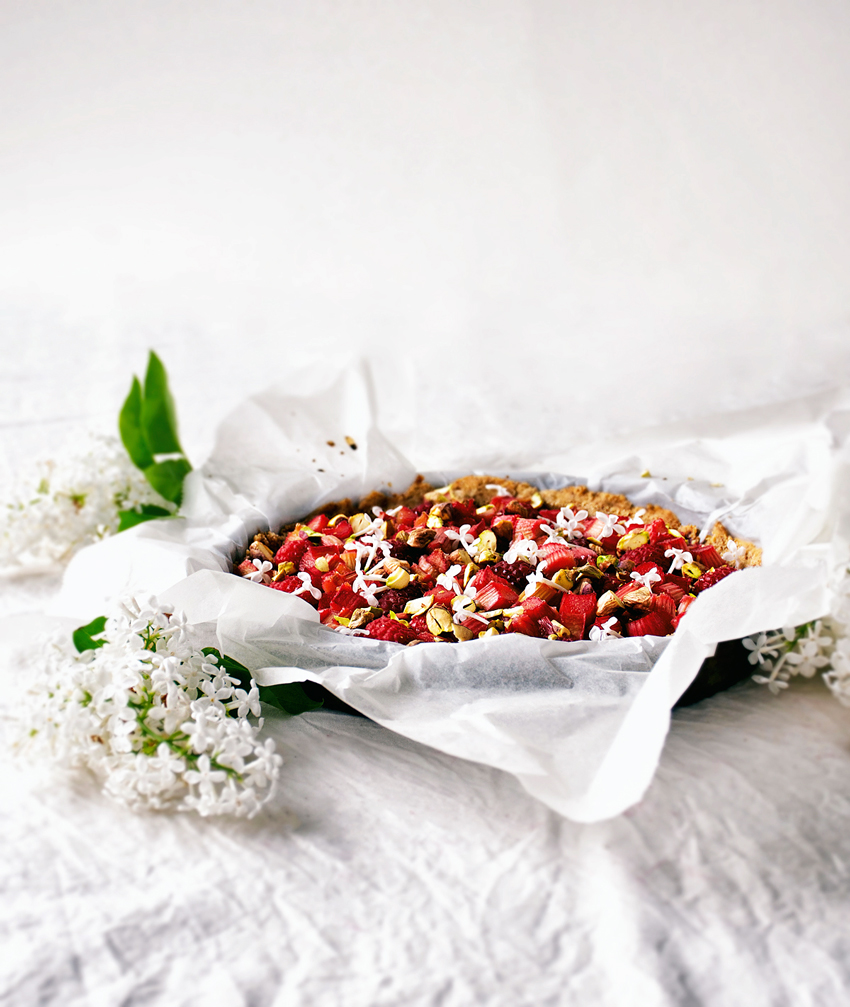 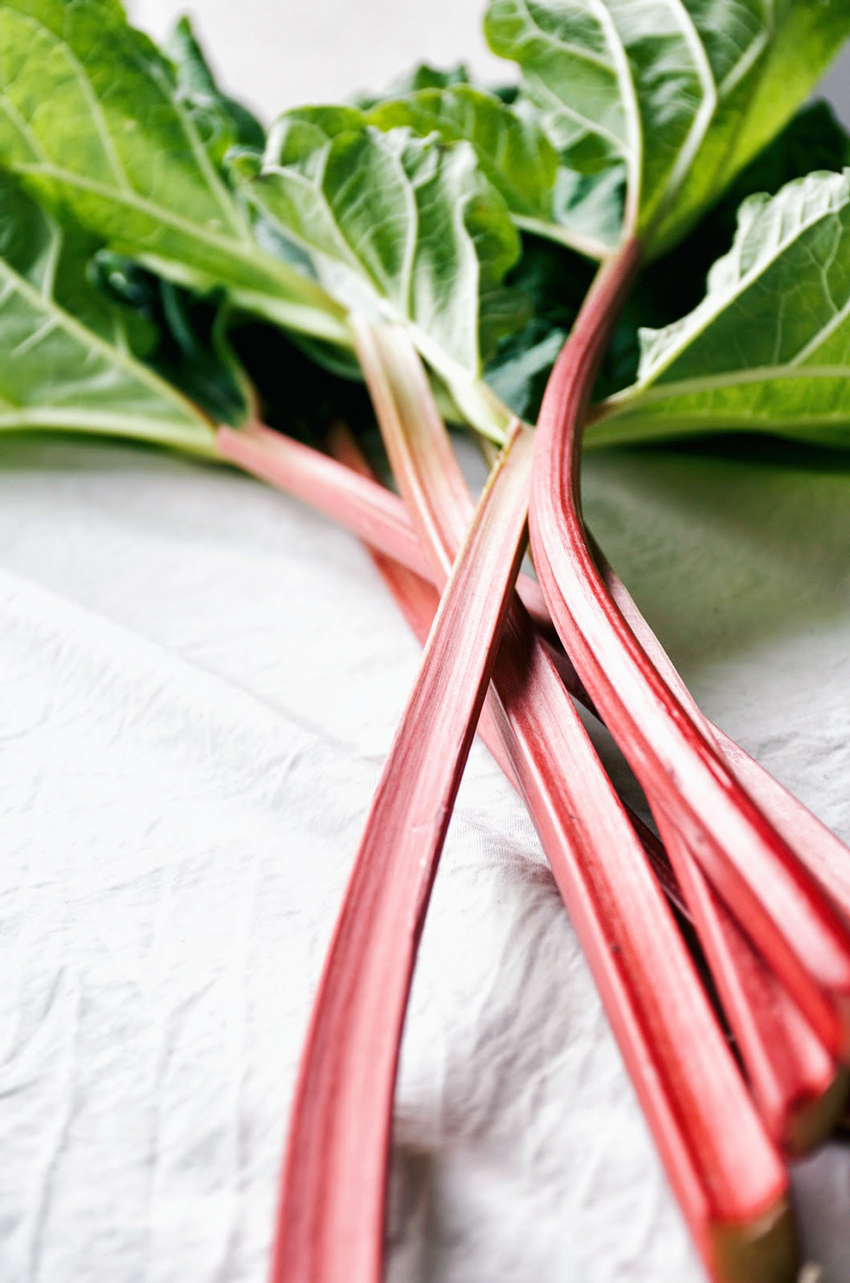 * I haven't tested this with other types of flour, but I'm sure it would work with spelt, and could probably be made gluten free. Let me know in the comments if you try it!
** Use solid, room temperature coconut oil, not liquid. 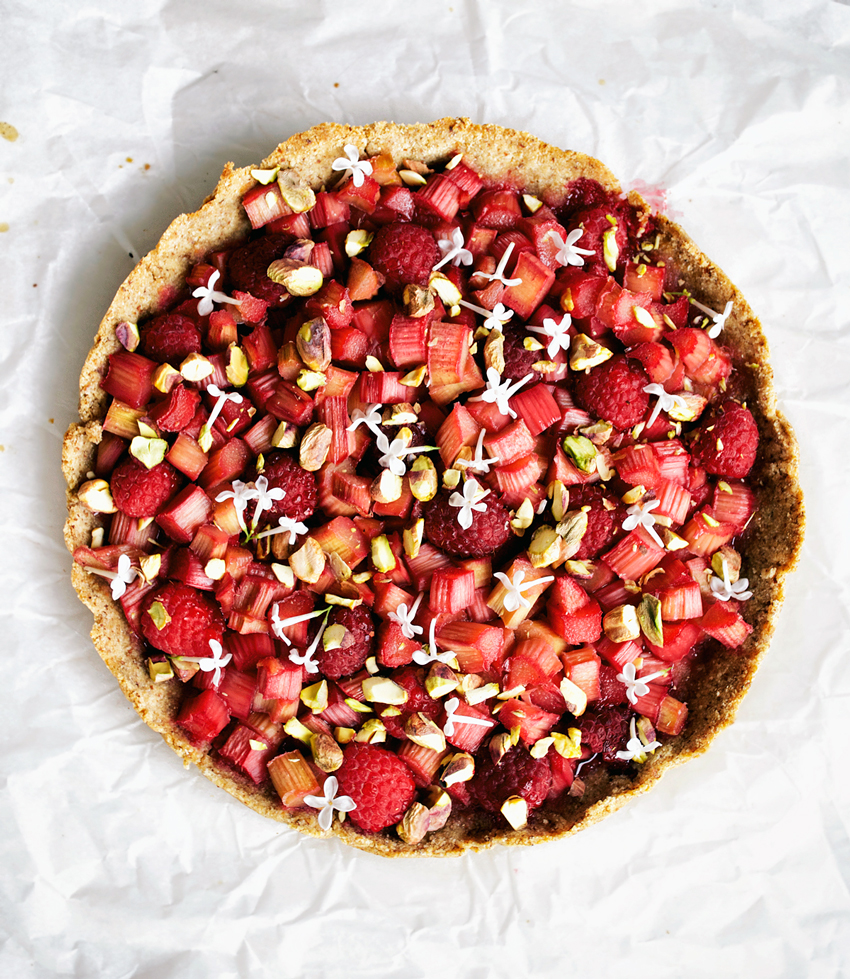