November 28, 2022 by Alexandra DaumTime: 1 hour 30 minutes   Servings: 6-8
This vegetarian stuffed pumpkin recipe uses smaller winter squashes with edible skin for a perfect holiday dinner. Filled with a flavourful rice and vegetable mixture, this can also be made as one large pumpkin.
Jump to Recipe 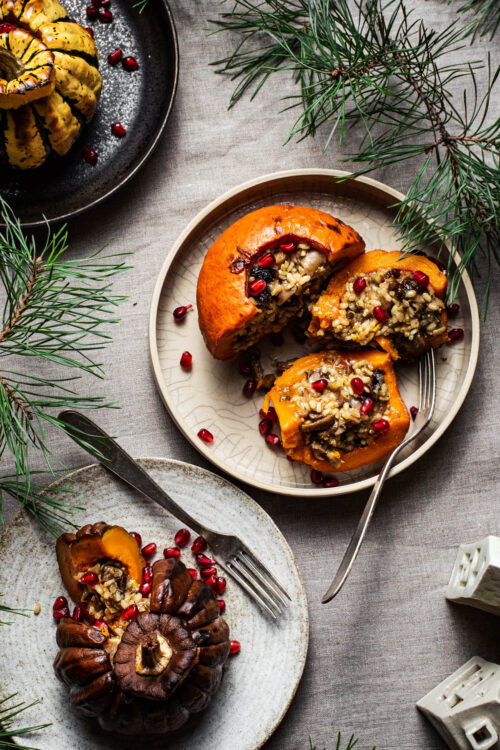 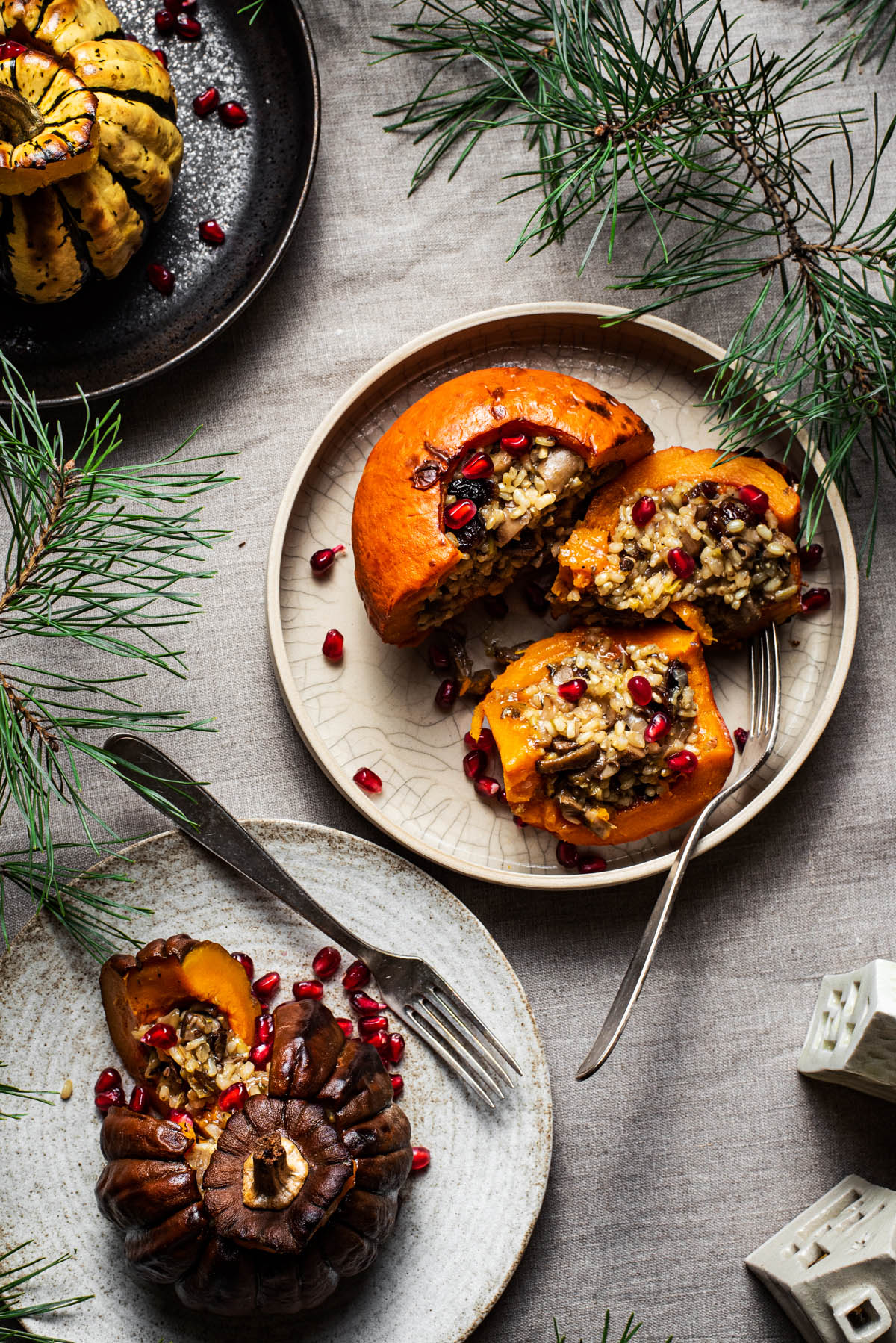 These vegan stuffed pumpkins are just right for a holiday dinner anytime from September right through until about February, when pumpkins are in season or winter storage. With a flavourful rice and mushroom filling, they look beautiful for serving and make a lovely centrepiece meal for a gathering.

There’s a noticeable stuffing flavour here. I’m not a fan of stuffing – it’s not a feature at German Christmas dinners – but Graham loves it and the flavours are nice. This is a bit like rice stuffing and it’s fab.

This recipe is adapted from the Show-Stopping Moroccan Stuffed Pumpkin in my cookbook (pg. 147) but with more typical Christmas flavours. I’ve added mushrooms here to make the filling a little meatier and used rice for an easy gluten-free option, but the idea is similar. I like the look of the smaller pumpkins once served, too.

Why You’ll Love This Recipe

A vegetarian holiday meal doesn’t have to be bland and boring, and it should be a centrepiece in its own right (without pretending to be turkey). These stuffed pumpkins are so pretty and delicious, they stand up to any main dish on a festive table, and go over well with non-veg people, too.

1. Cook the mushrooms in a hot pot with the olive oil, searing until browned.
2. Add the onions, leek, garlic, and herbs, and cook a few minutes more.

3. Deglaze with the wine, then stir in the broth. Bring to a boil.
4. Add the rice and reduce to a simmer. Cover to cook the rice.
5. Cut the tops from the pumpkins, then brush the insides with the oil and spices.
6. Cook the pumpkins for about 20 minutes, or until just fork soft (this will vary based on size).

7. Taste the filling and add any extra seasoning if needed.
8. Fill the pumpkins and bake again to heat through before serving.

This is a slightly involved recipe as it’s meant to be a holiday dish, but it doesn’t take too long if you multitask. Prep and cook the pumpkins while the rice is cooking, for example. If you can do this, it cuts the time down significantly and you’re looking at about 20 minutes of hands-on work.

I do find that using brown rice for the filling takes ages to cook properly, but this might be due to the bulk-store rice I get being old. To mitigate that – since it should only take 40 minutes – I cook it for the allotted time, then set aside with the lid on to steam for another half hour or so.

Topping with some pomegranate and/or parsley makes it look much more festive, but it’s an optional step. You could use some extra dried cranberries and a different fresh herb.

As much as I’d like to say the whole thing can be made in advance, the pumpkins don’t really like to be cooked far ahead of time. The filling can be refrigerated beforehand but the pumpkins really should be made fresh or they will shrivel and collapse a bit (not to say it’s not impossible, just not as pretty).

This might make more filling than you need depending on the size of the pumpkins. It tastes good served as is, so keep it (or freeze) to have later if you do end up with extra.

Freezing: I don’t recommend freezing this dish once assembled, but the filling alone can be frozen for up to a month in an airtight container.

What to Serve with Stuffed Pumpkins

Serve with crisp spelt buns and cranberry or lingonberry sauce for a traditional feel. If you’re thinking to serve as part of several courses, I think parsnip soup is a nice starter option, too.

If you make these Stuffed Pumpkins or any other vegetarian main dishes on Occasionally Eggs, please take a moment to rate the recipe and leave a comment below. It’s such a help to others who want to try the recipe. For more OE, follow along on Instagram, Facebook, and Pinterest, purchase the Occasionally Eggs cookbook, or subscribe for new posts via email.

* If the rice is older, it may take longer than 40 minutes to cook. I generally remove from the heat, then keep the lid on and steam for another half hour.