August 28, 2020 by Alexandra Daum
Vegan coconut panna cotta, flavoured with lemon, vanilla, and maple syrup, is a beautiful and simple summer dessert. Made with agar agar, a gelling agent made from seaweed.
Jump to Recipe 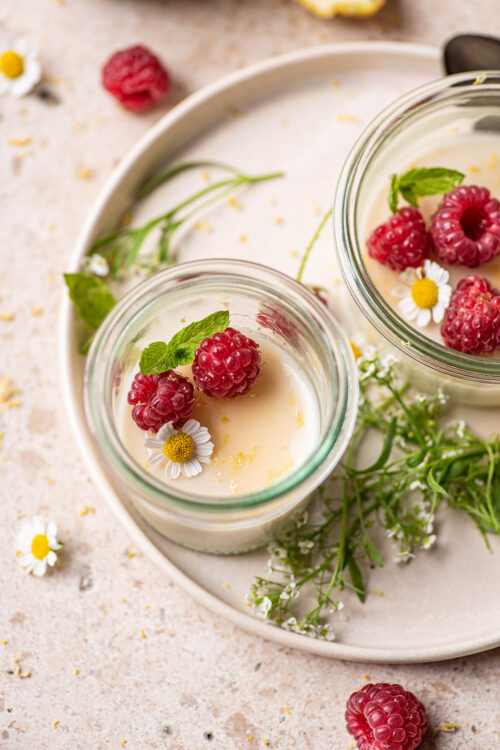 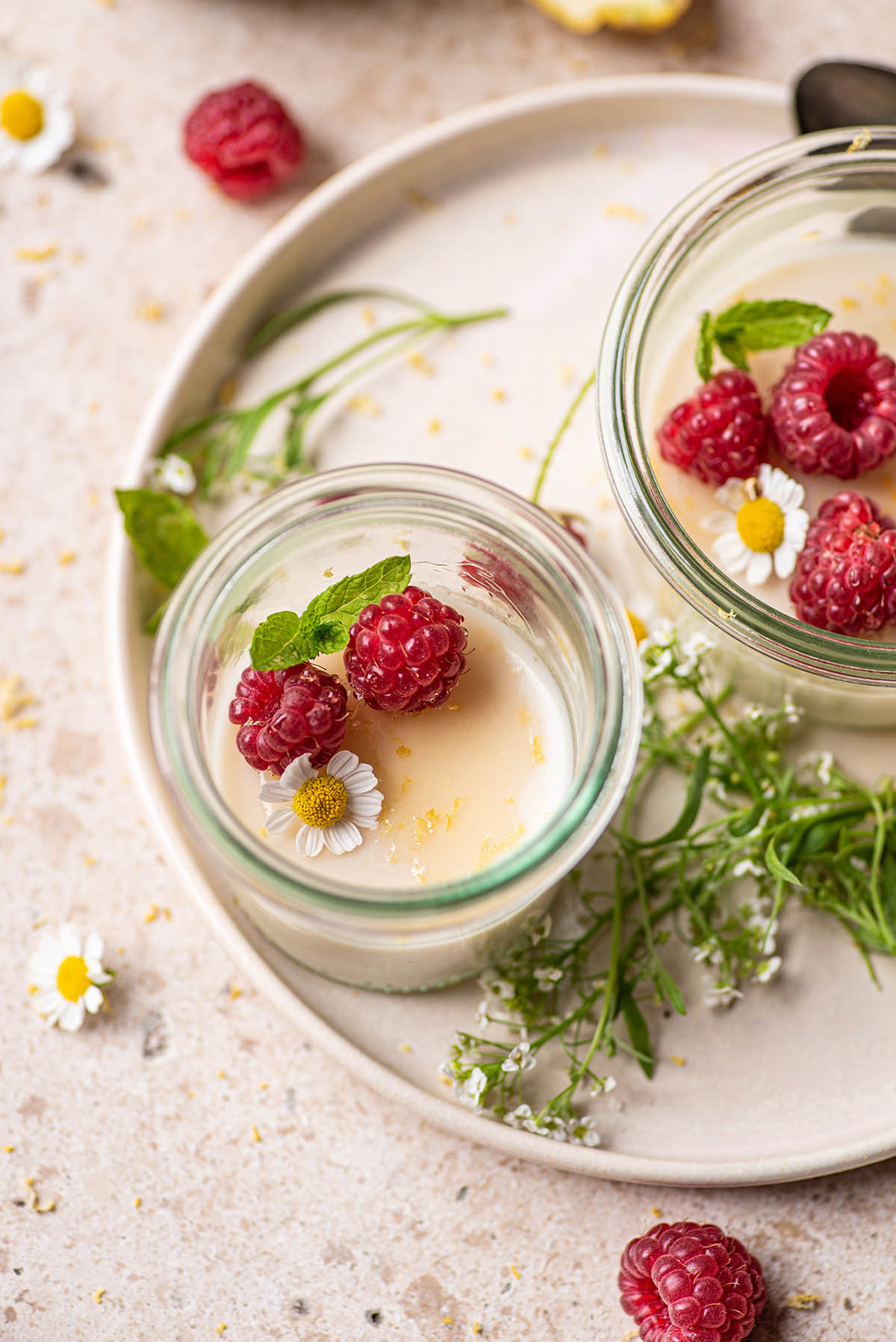 This coconut milk panna cotta is made with only a handful of wholesome ingredients, and which a very short cooking time, it’s a great summer dessert! It’s very simple to make and a wonderful replacement to the traditional dairy and gelatine version, using agar powder instead.

Lightly sweetened, creamy, and with a great flavour thanks to the lemon zest and vanilla, panna cotta is a fantastic dessert (and gluten free, too). It’s a set pudding, but still creamy and definitely not rubbery. This one is served in glasses but you could also pour it into moulds for some fun shapes.

There’s some confusion about the origin date of panna cotta, which is Italian, but there are similar desserts (blancmange, bavarois, muhallebi) from other regions and different times in history. Regardless, panna cotta became more popular in the mid-20th century. I wouldn’t say it’s necessarily a common household dessert now – maybe it peaked in the 90s along with things like molten chocolate cake – but it should be!

Zest and juice your lemon and scoop the cream off the top of a can of coconut milk. Set these aside (individually). This recipe needs a bit of watching, so you’ll be better off from the start if you have a mise en place.

Whisk the lemon juice, maple syrup, and agar in a small saucepan. Bring this to a low boil over medium high heat, stirring frequently, then reduce the heat to low and simmer for a minute.

Add the coconut cream, lemon zest, and vanilla to the saucepan. Bring it back up to a low boil, then reduce the heat again to simmer for two minutes.

Remove from the heat and let the panna cotta cool for a few minutes before pouring it into moulds or serving dishes. I’ve used small glass canning jars, but you can also use special moulds for a pretty presentation. Cool fully in the glasses or moulds before serving with any toppings you like.

If you find that the panna cotta isn’t quite sweet enough for you, try topping it with some coconut sugar. It will likely dissolve, but the flavour is nice (or use some extra maple syrup).

Look for a brand of coconut milk that’s quite smooth before cooking. Some brands have that grainy texture and it isn’t very pleasant here.

Agar is a common ingredient in desserts throughout Asia, used as a gelling agent in many jellies and other sweets. It’s made from red seaweed and needs to be boiled in order to activate, as seen in this recipe. You may find agar in powder or pieces (strips or flakes) – I can only get the powdered form where I live, so I haven’t tested this recipe with flakes.

I’m certain that flaked agar can be used here, I just don’t know the amount needed as powder is more potent due to the volume it fills compared to flakes.

Other plant creams can take the place of coconut milk, but of course the flavour will change significantly. A vegan “whole” milk like oat barista, for example, is thick enough to make a creamy panna cotta, but has a rather less pleasant taste.

Additional flavourings can be added to suit your tastes – cardamom is nice. If you prefer a more wintery flavour, try subbing orange for the lemon and adding extra spices (cinnamon, nutmeg, cloves, lebkuchen spices).

This post was originally published in August 2014. It was last updated with new photographs and improvements to the text and recipe as of August 2020.