January 23, 2018 by Alexandra Daum
Vegan coconut bread made with shredded coconut, coconut oil, and coconut milk – that’s the triple bit! This is a healthy twist on the classic, with just a little maple syrup as sweetener and made with whole wheat spelt flour.
Jump to Recipe 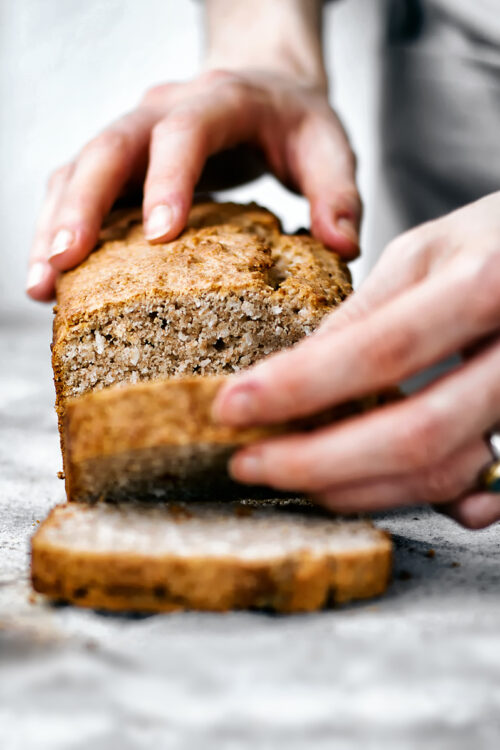 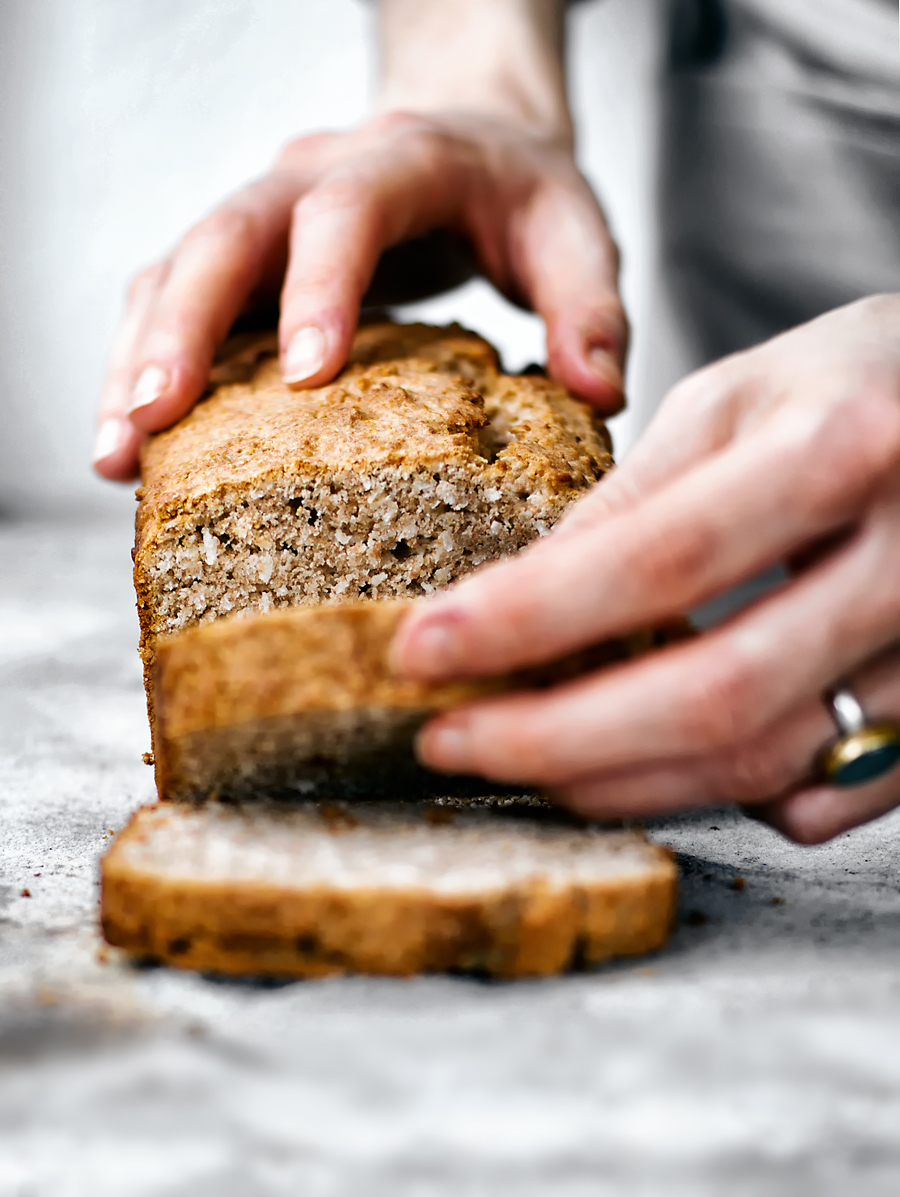 Triple coconut bread, i.e. made with coconut milk, oil, and shredded coconut – and it’s vegan! One of the very first recipes I posted here was for cleaned-up coconut bread, and long time readers have always liked it despite the terrible photos. I used that recipe as a base but ended up having to test it several times and ate about half a loaf of coconut bread every day for a week (poor me).

The original recipe uses eggs and coconut sugar, which I’ve replaced here with more coconut milk and a smaller amount of maple syrup or honey. I also kicked that banana to the curb to get a true coconut flavour without edging in to banana bread territory. The original recipe is still good, but I so rarely bake with eggs anymore that I needed an egg-free recipe for one of my favourite treats! I’m thinking about trying a quadruple vegan coconut bread with coconut flour at some point but coconut flour is almost impossible to use without adding eggs.

I was born in Toronto and then lived in a small town north of the city until I was eight, and my best friend there was Trinidadian. Her grandparents made coconut bread and would give me a loaf every once a while, or I’d just eat it at their place, and then when we moved to Manitoba they wrote the recipe down for me. Almost 20 years later and that original coconut bread recipe is long lost, but I remember the flavour and texture of their bread perfectly.

This is as close as I can get it using whole food, healthy ingredients and making it vegan, and it’s pretty damn close. It’s more cake-like than anything but a totally acceptable snack without having to worry about crashing on sugar. The most important thing in this recipe is to use full fat coconut milk, no substitutions. It won’t work with another, lighter milk. Also note that this isn’t a super sweet loaf – only a quarter cup of maple syrup, but it’s mildly sweet thanks to all the coconut.

The hardest thing about this recipe was keeping myself from adding orange to it! Every winter I become completely obsessed with oranges and citrus and want to add it to everything. Sometimes classic is best, so the bread is just spiced with a little nutmeg.

• Greasing the tin instead of lining it with parchment results in a nicer, golden outside crust. You can line it if you prefer. • I use beeswax wrap now and it works perfectly, without the plastic. • A lot of you have made my banana bread successfully gluten-free, but I think this recipe might be a little trickier as it doesn't have bananas as a binding agent. If you try it, please let me know! I imagine it'd work with a 1:1 gluten-free flour substitute but I haven't tried it. * I always use fresh-grated nutmeg so if you use pre ground you may need a tiny bit more. ** I have tried this with alternate milks (like oat) and they don't work. You need the coconut milk to get the right texture.
© Alexandra Daum
Course: Breakfast
Cuisine: Vegan
Print
Previous Post: « Vegan Potato Pea Curry
Next Post: Creamy Sweet Potato Coconut Milk Soup »