August 31, 2020 by Alexandra DaumTime: 20 minutes   Servings: 24 cookies
Gluten free and vegan trail mix cookies made with a mix of whole grain buckwheat and oat flour, mixed seeds, dried fruit, and chocolate. These healthy oat flour and buckwheat cookies can be changed up with whatever add-ins you like as long as you stick to the base recipe, and they make a great snack.
Jump to Recipe 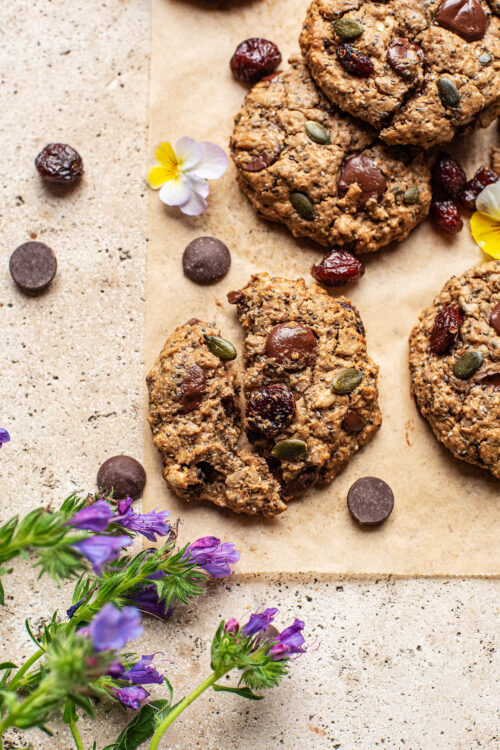 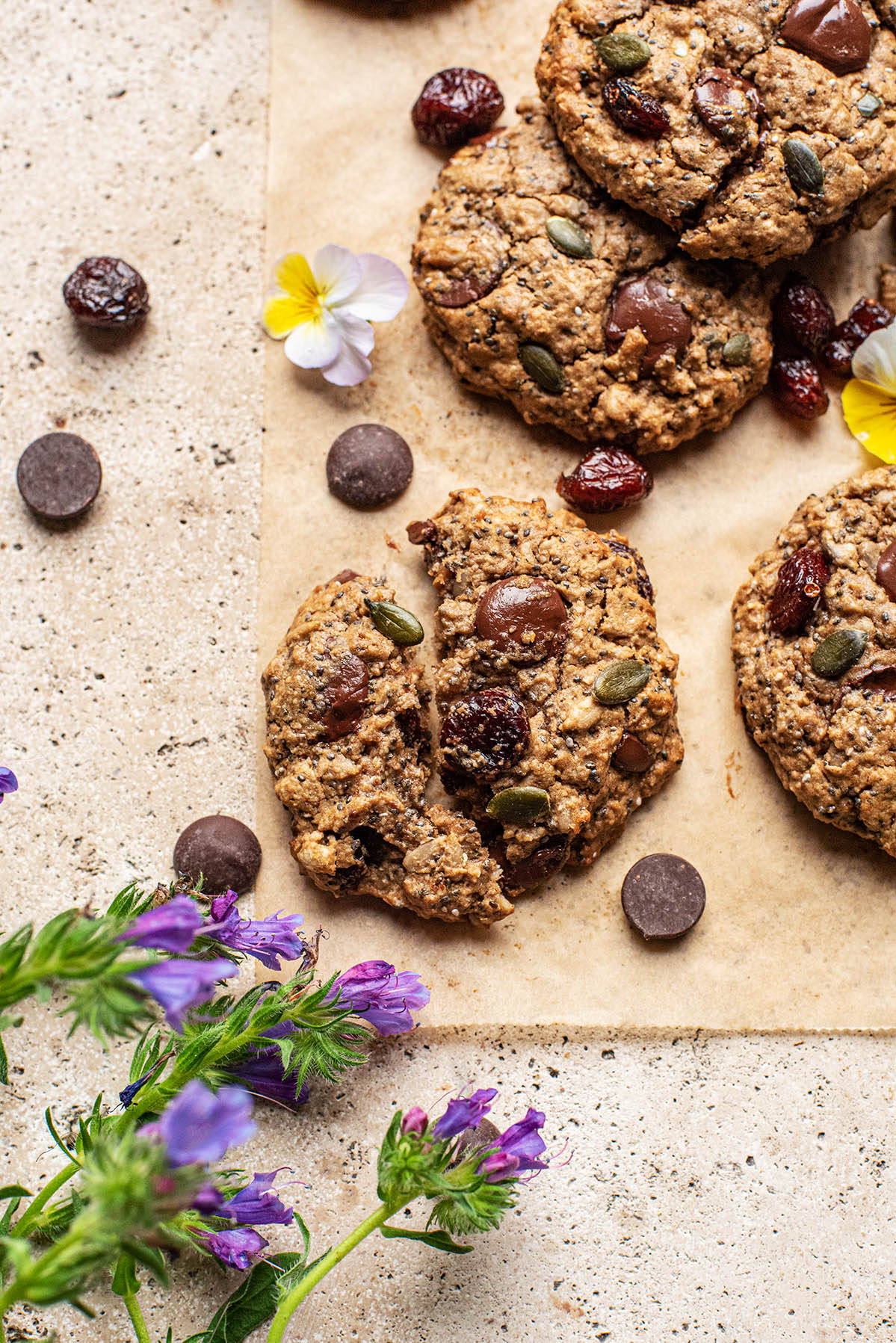 The neat thing is here that the cookies aren’t really crumbly at all. Oat and buckwheat flour are great for gluten free baking, easily my favourites, and chia, nut or seed butter, and coconut oil hold everything together here really well.

I chose coconut sugar to do most of the sweetening here. It makes them a bit more dessert like rather than breakfast, but with all those seeds it works either way. We are not averse to chocolate for breakfast.

These are true trail mix cookies, with lots of energy-boosting ingredients like whole grain flours and plenty of seeds. If you love to walk or hike, or often need a nutritious midday snack, these are just right for you.

1. Mix: whisk the dry ingredients in a large bowl to combine.
2. Add-ins: stir in the add-ins (seeds, chocolate, etc.) to incorporate.

3. Mix wet ingredients: in a separate bowl, whisk the wet ingredients until combined.
4. Mix the dough: add the nut butter mixture and stir well to combine. Don’t worry about over mixing.
5. Scoop cookies: place onto a prepared baking sheet and flatten slightly.
6. Bake: if possible, two trays can be baked at once. Otherwise go in two batches.

These cookies are really quite sturdy. Part of the reason they’re called trail mix cookies is because they work well to bring on a hike and don’t fall apart so easily. They do get a bit softer when the weather is very warm, so keep that in mind if it’s 30 degrees when you’re out.

The cookie mixture will seem too wet when you first stir it up, so you let it sit for a few minutes to let the chia do its magic. That’s why the recipe is a bit different than usual and you mix up the dough before heating up the oven. It rests and firms up while the oven heats.

I haven’t tried these cookies with 100% either oat or buckwheat flour, just the mix. And if you’re not sure, despite the misleading name, buckwheat is totally gluten free!

Storage: place in a sealed container and refrigerate or store at room temperature. In the summer months I suggest refrigerating, and in winter they can be on the counter for 3-4 days.

Freezing: to freeze before baking, freeze the scooped and flattened cookies on a sheet before moving to containers. Bake at the same temperature but add a couple minutes to bake from frozen. For baked cookies, simply freeze in an airtight container for up to three months.

Buckwheat, I think, can take a bit of getting used to. As a flour, it’s very neutral and slightly nutty, but the seeds have a texture that can be a bit strange as you chew. If you’re not sure if you like buckwheat seeds then I’d use something else in the mixed seed bit.

If you have to buy more buckwheat flour than this recipe calls for, it also makes great gluten free banana pancakes, and several readers have had success using buckwheat to make my tahini banana bread gluten free too. As far as gluten free flours go it’s a solid all-purpose one to have around and has a good flavour.

• As I mentioned above, you can make your own oat and buckwheat flour in a high speed food processor. Just add the same amounts of buckwheat groats and rolled oats into the bowl of a processor and blend until a fine flour forms. • Not preheating the oven first isn’t a typo – the dough needs to sit for a few minutes to allow the chia to absorb some of the moisture and make it easier to handle. Once it’s rested slightly, you should be able to roll the dough into balls. If you have a cookie scoop that can be used instead.

This post was originally published in November 2018. It has been updated with new photos and improvements to the text and recipe as of August 2020.