July 26, 2020 by Alexandra Daum
This vegan summer fruit galette is made for high summer produce and filled with nectarines, apricots, and peaches. Flavoured with cardamom and cinnamon, with an easy vegan coconut oil pie crust.
Jump to Recipe 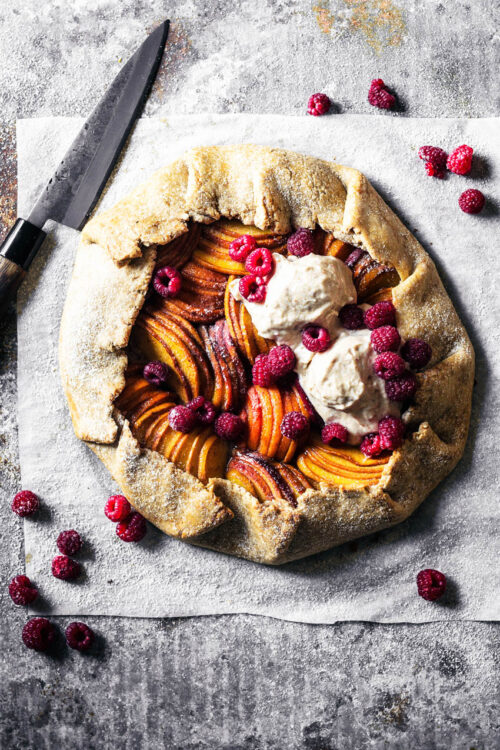 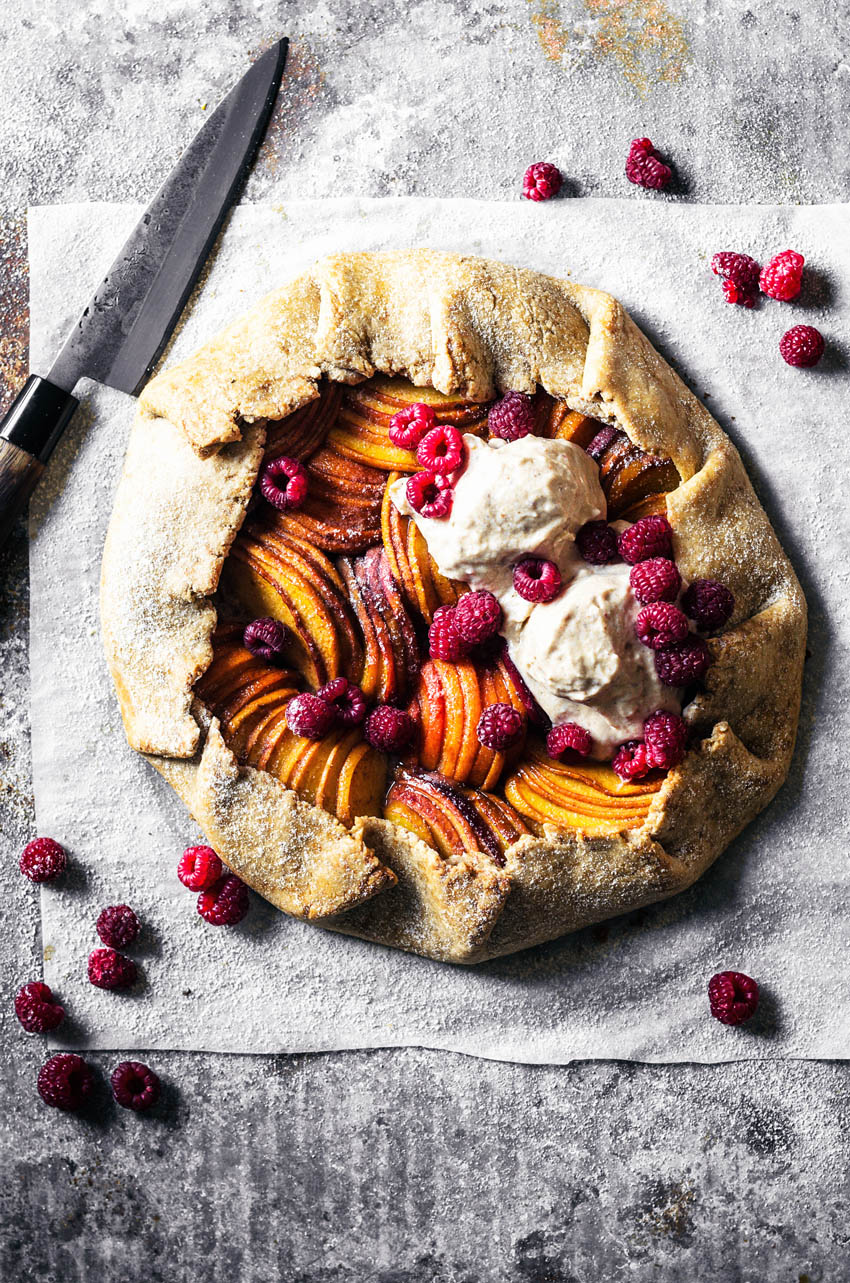 This post was originally published. inAugust 2018. It has been updated with improvements to the text and recipe as of July 2020.

If you’ve never made a galette before, it’s like an easier version of a pie. You just roll out one piece of pastry, stick the fruit in the middle, and fold it over. No lattice needed.

If you’re new to vegan pastry in general, a galette is the way to go. This summery peach galette is the perfect dessert for high summer – simple, and highlighting the best of the season. Top it with a little coconut milk ice cream for an impressive, easy dessert.

Start by preheating your oven, and line a baking sheet with parchment. If you only have flat baking sheets (with no lip) you may want to use a large pan, like a cast iron pan or tart pan, instead to prevent any fruit juices leaking into your oven.

Make the dough. Mix the dry ingredients with a whisk or food processor, then add the coconut oil. Mix until the oil resembles breadcrumbs and is a bit like slightly clumped sand in appearance.

Add the cold water a tablespoon at a time, mixing briefly between each addition, until a slightly crumbly dough forms. You should be able to press it together with your fingers and it’ll hold its shape, but still able to crumble.

Press the pastry into a disc and cover it with beeswax wrap or an inverted bowl. Set it aside, at room temperature, while you make the filling. This allows the gluten to rest and will make the pastry easier to roll.

Slice the fruit very thinly (see tips and notes, below) and place it into a large bowl with the syrup, cinnamon, and vanilla. Mix until the fruit is very well coated. If you’re using a juicier fruit in the mix, you can add a tablespoon of arrowroot powder to help prevent leaking.

Roll out the pastry dough, place it onto the prepared baking sheet (important! Don’t assemble the galette and then try to transfer it!) and sprinkle it with the almond flour. Arrange the fruit as you like, then fold the pastry over the edges.

Bake the galette for about 50 minutes. The fruit filling should be bubbling up and the pastry should be a light golden colour when it’s ready. Cool about 15 minutes before serving with vegan ice cream or coconut whipped cream.

The best thing about a vegan coconut oil pastry is that it doesn’t need any chilling time – you can make it, roll it, and bake it, all within a few minutes. For this recipe I like to make the pastry and let it rest on the counter in beeswax wrap (instead of plastic) while I prepare the filling.

Using coconut oil gives it a nice flavour without being overwhelming and most people won’t notice that it’s made without butter, promise. This type of pastry works well for more savoury recipes like vegan pasties too.

Tough pastry: this is due to overworking the dough. Keep a light hand, and mix the least amount you possibly can. If your pastry is hard or tough, it’s 100% because you’re overworking it. A gentle hand is needed!

Leaky Pastry: galettes can be a little leaky sometimes but the trick is to keep the pastry a little thicker than you might otherwise. So make sure your pastry tastes good – no shortening – and know that some fillings will just be juicier than others (like strawberries).

Pale Pastry: coconut oil pie crust is just lighter in colour after baking, it’s normal. You can brush with a bit of vegan milk before baking to help it darken a bit (coconut milk = most golden) or use an egg wash if it doesn’t need to be vegan.

Slicing Fruit: the stone will come out more easily if you don’t halve them along the crease in the fruit. Move over 90 degrees and slice there instead – you’ll get the rougher edge of the stone that way. If you’re not too worried about making the filling pretty, just mix it with the rest of the ingredients and pile it in the centre of the pastry. It’ll taste the same, and still look nice!

You can use any variation of these types of stone fruits you like. Go with all peach or nectarine, add plums, toss a few cherries in – whatever you like and have. I really like the combination of the slightly tart apricots with the sweeter fruits.

As always, all-purpose flour is the best substitution for spelt. If you need a GF version, you can try a 1:1 GF flour like the one from Bob’s Red Mill, or try this gluten-free pie crust (though it’s not vegan).

Brown sugar can be used instead of coconut sugar, and hazelnut flour is a good alternative to almond flour. You can use date syrup instead of maple syrup if preferred, or honey if the galette doesn’t need to be fully vegan.

* The almond flour helps to prevent the base of the pastry from becoming soggy and gives it just a hint of almond flavour.