August 20, 2021 by Alexandra Daum
Vegan and gluten free ice cream sandwiches, made with an easy no-bake brownie layer and cashew raspberry filling. Thanks to Bob's Red Mill for sponsoring this post!
Jump to Recipe 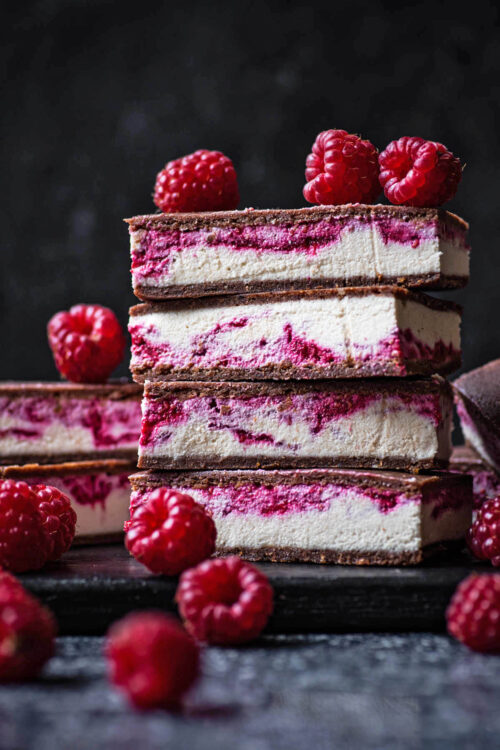 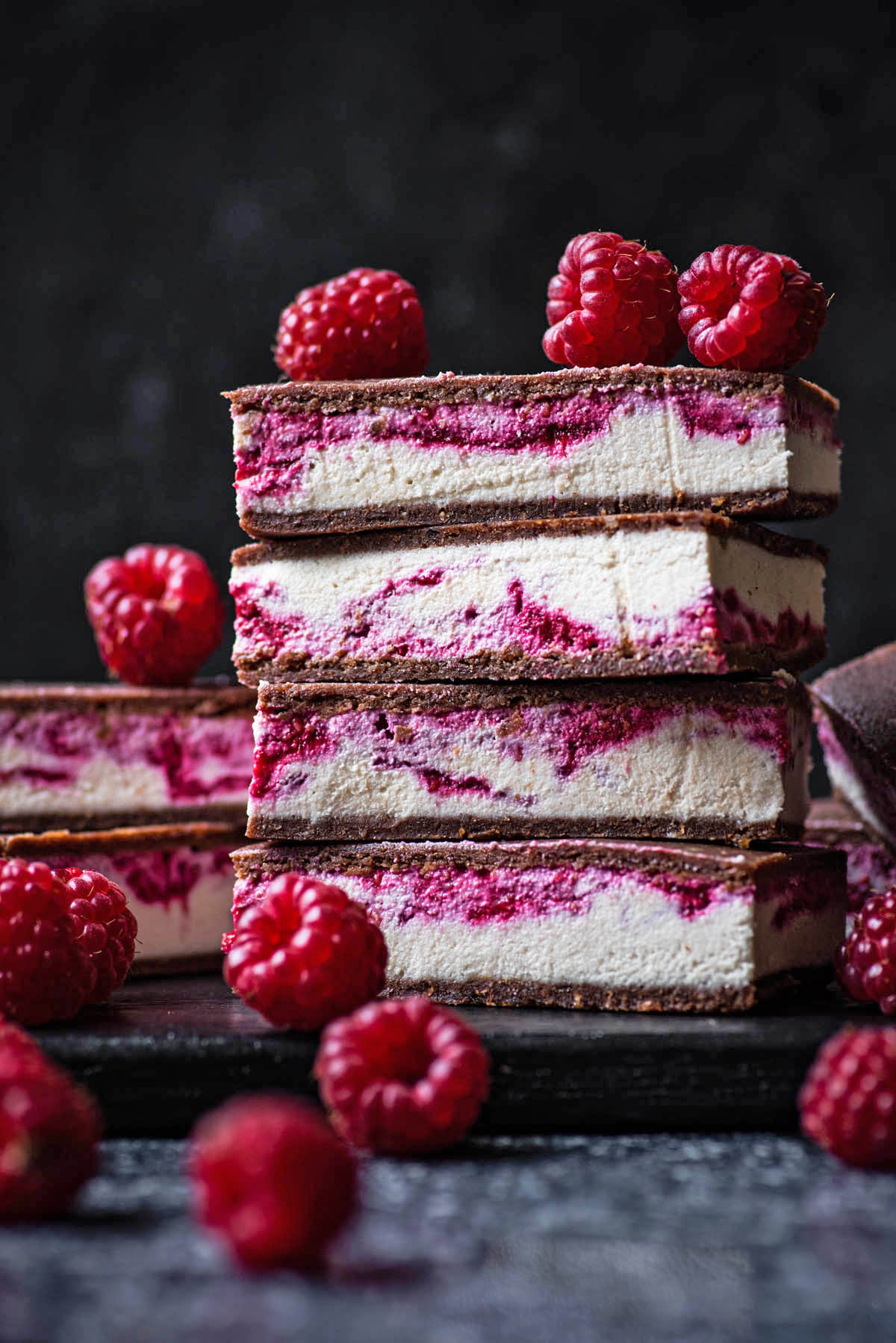 We grew up with the occasional ice cream bar from a package – those ones with the slightly sticky chocolate outside and vanilla filling. These vegan and gluten free ice cream sandwiches are a healthy-ish spin on those, with a date sweetened sandwich layer and coconut cashew raspberry swirl filling.

A little bit higher in protein and fibre, with the almond flour and cashews, you should feel pretty good after eating one of these ice cream bars! No sugar headaches, thanks. Definitely a dessert but I think they work if you want a breakfast dessert, too.

They’re also completely grain-free, if that’s important to you, with coconut flour adding a bit of bulk. I think these can be paleo friendly depending on the type of nut or seed butter you use.

These are easy to cut and serve after 3-4 hours in the freezer. They won’t be frozen solid yet, but the ice cream doesn’t melt as rapidly as vegan ice cream usually does.

My tin is 20x20cm (8 in.). A larger, smaller, or differently shaped container can be used. Keeping it approximately the same size will have the best ice cream to brownie ratio.

A sharp knife will make for nicer looking ice cream sandwiches, but this isn’t hugely important. If the bars are frozen solid, dip the knife in hot water each time before slicing.

Using jam instead of simply mashing the raspberries is due to the frozen texture. Cooking the berries reduces the water content, which in turn reduces the iciness after freezing.

If you want to use vanilla powder in place of extract, add a couple teaspoons of vodka to the ice cream. This will ensure a nice soft filling even when frozen solid (my vanilla extract is just beans in a bottle of vodka).

To shorten the soaking time for the cashews, use very hot or even boiling water. This can reduce the time needed to an hour or two.

The filling layer is adapted from my friend Natalie at Feasting on Fruit.

You don’t need a high end, super powered blender for this recipe (I don’t have one). I do find that my immersion blender makes a creamier filling than the food processor, but my processor is also really cheap.

If possible, either use a higher wattage immersion blender, or a standing blender. A food processor can work well but it needs to be mixed for a longer time. In any case, pretty much anything with a blade can mix the cashew cream, it just might need some time.

If you don’t want to make your own ice cream, just use store bought! Thaw it for about ten minutes before scooping out and spreading over the bottom brownie layer, top with the second brownie, freeze, and slice as usual.

You can also use another type of ice cream – my three ingredient chocolate coconut milk ice cream is great if you want double chocolate sandwiches, or try toasted coconut ice cream.

As always, honey can be substituted for maple syrup. I use more honey these days because it’s local rather than imported from across the Atlantic. Date or coconut syrup would also work.

Hazelnut flour makes a good substitution for almond flour. For a nut-free option, you could try blending sunflower or other seeds, but I think it might be too bitter.

If you want to use an alternative to coconut flour, use double the amount, as coconut flour is twice as absorbent as most other flours. Oat flour is a good option. Don’t use a wheat-based flour unless you cook it beforehand, as it can’t be consumed raw.

If you don’t have or don’t like raspberries, use a different fruit. Blackberries, strawberries, blueberries (any berries), and peaches or other stone fruits are all great. Store-bought jam can be used.

Baking cocoa and raw cacao can be used interchangeably for this recipe. The flavour will change very slightly but it’s barely noticeable.

* If you want to use vanilla powder (1/2 teaspoon), add an extra 2 teaspoons of vodka to ensure the ice cream layer is soft enough after freezing. ** To make raspberry jam yourself for this recipe, simmer the raspberries with an optional drizzle of honey for 10 minutes, then chill fully before adding to the ice cream. To chill rapidly, place the base of the pot in a bowl filled with ice water.