September 18, 2020 by Alexandra Daum
A simple, late summer dessert, this vegan and gluten-free plum crisp only needs a few minutes of prep. It's total comfort food as the weather starts to cool with the arrival of autumn.
Jump to Recipe 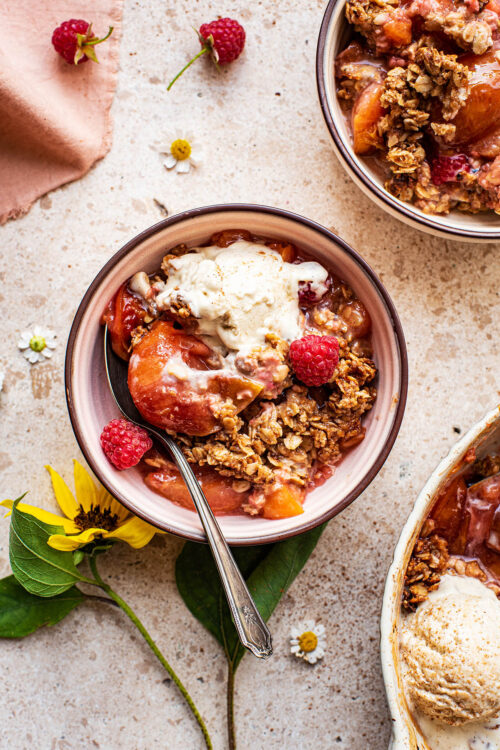 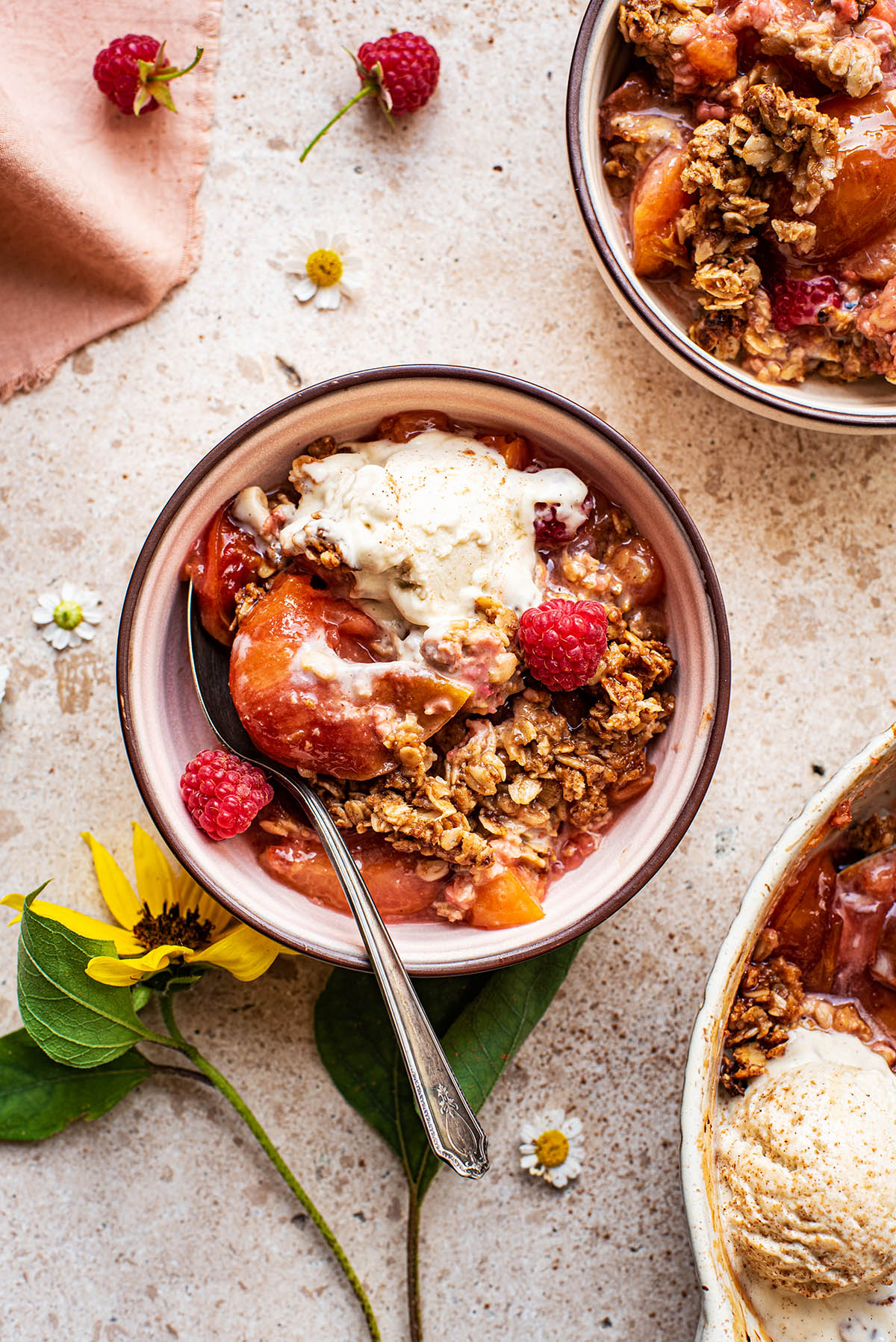 It was a bad year in most of Europe for soft fruits like plums this year – there were hailstorms in Italy and Spain, which damaged many of the crops, and a late frost further north. Usually at this time of year you can gather wild plums (actually Mirabelle plums) in the woods where my omi lives, but the frost ruined the fruit. As a result, stone fruits were rare and expensive this year.

Luckily I got some local plums to make this plum crisp! They have a fairly short in-season window but prune plums (Zwetschgen, sometimes called damson plums in english) are in season into October and can also be used here. See German plum cake.

With a simple and flexible gluten free streusel topping (see substitutions for more on that) and a 3-ingredient filling, this dessert is about as easy as it gets. Crisps are the ultimate late-summer / early autumn transition dessert.

Plums are a special treat and often ignored in favour of peaches and nectarines during stone fruit season. Let them shine in an easy plum crisp – you won’t regret it.

1. Mix the dry ingredients: combine the oats and other dry topping ingredients in a mixing bowl.
2. Add the oil and milk: use your hands to mix until crumbly to make the streusel topping.

3. Prep the plums: quarter the plums and place them in the baking dish with the honey and arrowroot.
4. Top and bake: sprinkle with the oat topping and bake for about 40 minutes.

You might need to shave a few minutes off of the baking time here, or add some, depending on whether your oven is running at the correct temperature or not. Look for the fruit bubbling around the edges – that’s a good sign any crisp is fully baked.

Adding a splash of milk to the streusel along with the oil helps to mimic the make-up of butter, which includes water. Pure oil tends to cause the streusel to melt too quickly, but including milk makes for a much better texture overall.

The ice cream pictured is a spin on this toasted coconut ice cream, but with cinnamon added instead of the coconut mix. You can also serve with coconut whipped cream.

Storage: as with any crisp, the topping will soften over time as it sits. This is best served the day it’s made, but can be stored for 2-3 days in a sealed container at room temperature.

Freezing: cool fully before covering well and freeze for up to three months. Thaw in the refrigerator overnight, then heat through before serving. It can also be frozen before baking, then thawed and baked as usual.

If you make this Gluten-free Plum Crisp or any other vegetarian dessert recipes on Occasionally Eggs, please take a moment to rate the recipe and leave a comment below. It’s such a help to others who want to try the recipe. For more OE, follow along on Instagram, Facebook, and Pinterest, purchase the Occasionally Eggs cookbook, or subscribe for new posts via email.

* Mine is about 20cm (8 in.) in diameter, but a little larger or smaller will work. Just keep an eye on it close to the end of the baking time.