July 6, 2021 by Alexandra Daum
A beautiful early summer dessert, this simple apricot galette is made with a vegan spelt and rye flour pastry.
Jump to Recipe 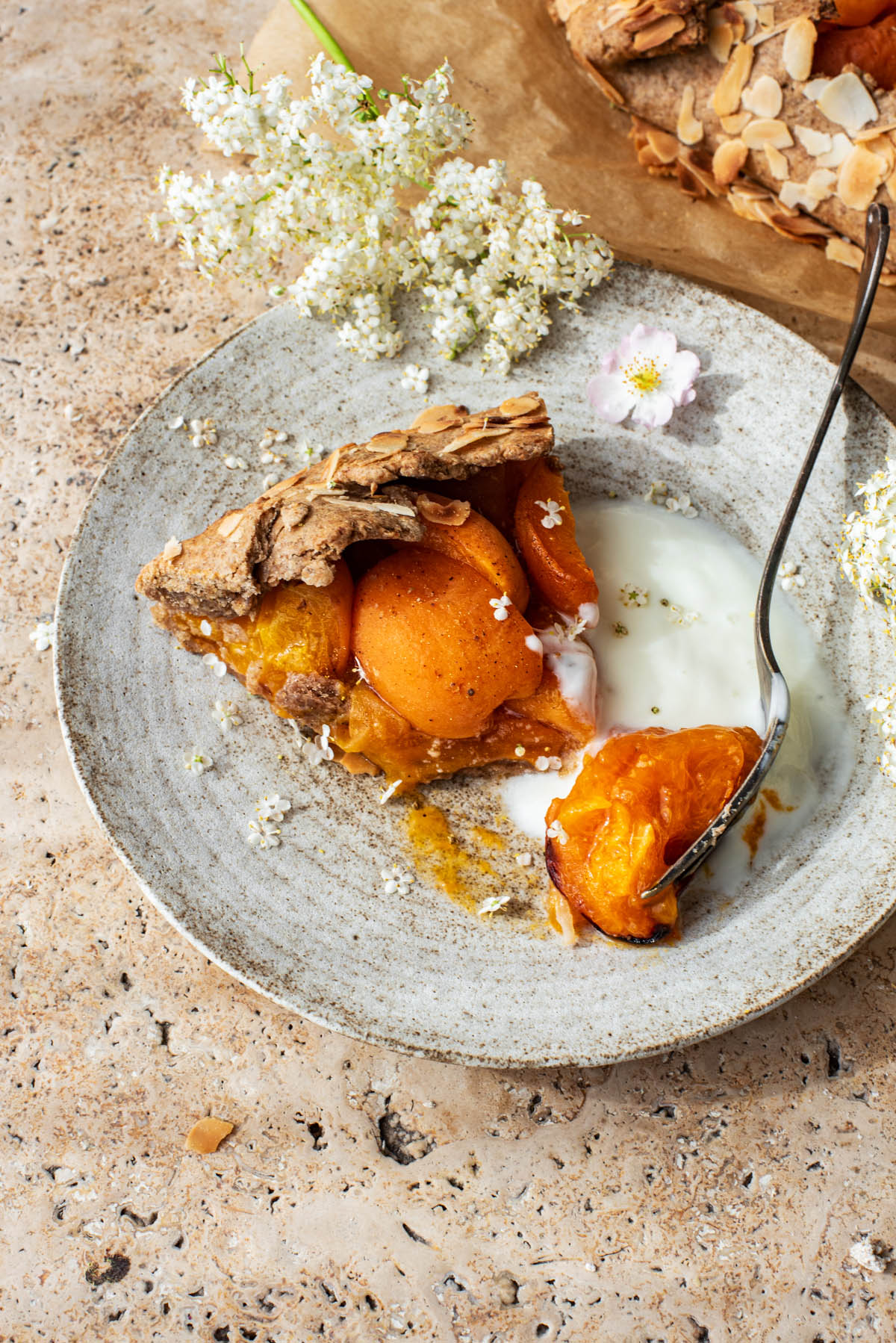 Apricots, like all stone fruits, have a short and very sweet season. Take advantage while they’re here, and make an apricot galette!

This is an ultra flavourful bake, with both spelt and rye flour adding a lovely nutty element, plus almond flour in the base of the pastry. No lacklustre white flour desserts here.

A hint of fresh ginger adds just enough spice, and minimal sweetener keeps the filling from being too sweet. You can really taste the apricots and that’s how it should be – it’s a lovely treat and well worth making this summer.

If the slight fuzziness of apricots, like peaches, isn’t your thing, don’t worry – cooking them reduces it to an indiscernible amount. I don’t like that either but the fruit doesn’t need to be peeled before use.

I find baking galettes in round tins to be easier than on a baking sheet, but it doesn’t matter. I always use an Obstboden form (a German fruit flan pan) but something like a tart tin, or anything with low sides, works well.

If you prefer a very simply pastry, use all light spelt flour in place of the rye. It’s an easy coconut oil pastry and I find it’s often easier to make than traditional butter versions – certainly more forgiving – but the rye flour does add some complexity of flavour.

For a nut-free version, omit the almond flour and sliced almonds. Almond flour under the fruit helps to reduce the chance of a soggy bottom and adds a nice element to the galette, but it can be left out.

Change the spices based on your preference. If you don’t like ginger, use cinnamon or cardamom instead, or go for just vanilla.

The pastry dough will look very dark and slightly grey before baking. That’s normal, don’t worry, it’s the rye flour. It does lighten up and turn golden after it’s baked. If you have access to sifted or lighter rye flour, it can also be used in place of whole grain (type 815 in Germany).

• It can be refrigerated for a couple of hours in an airtight container with no issues. I never wrap dough in plastic wrap but if you want to store for 12-24 hours, wrap it in beeswax wrap before placing it into the container. • If the pastry isn’t coming together when mixing with a spoon, you can use your hands. Use a light, quick touch to prevent the dough from heating up too much and melting the oil.

• I don’t find that this recipe needs a starch (like arrowroot or cornstarch) because the apricots don’t create too much liquid during cooking. If you are familiar with your stone fruit and know that it’s really juicy, add a tablespoon of starch to the filling before mixing.

• If you aren’t used to making pastry, it may be easier for you to roll the dough out between two sheets of parchment paper. That way, you don’t have to lift the dough onto the parchment with the rolling pin – you can lift the paper right onto the baking form or sheet. • Don’t worry if it’s not perfect. Galettes are the easygoing sibling to more high maintenance pie.

• If the edges of the apricots start to burn during baking, cover the top of the galette with a piece of parchment paper that’s scrunched at the edges for form a round (so it doesn’t fly off if the fan is running). You’re bound to get a bit of darkening on the fruit here and that’s normal.
© Alexandra Daum
Course: Desserts
Cuisine: French
Print
Previous Post: « Green Monster Swiss Chard Frittata
Next Post: Summer Greek Chickpea Salad »