September 6, 2021 by Alexandra Daum
A late summer gathering staple, honey elderberry syrup is often used as a sore throat remedy. It makes a great easy drink, too.
Jump to Recipe 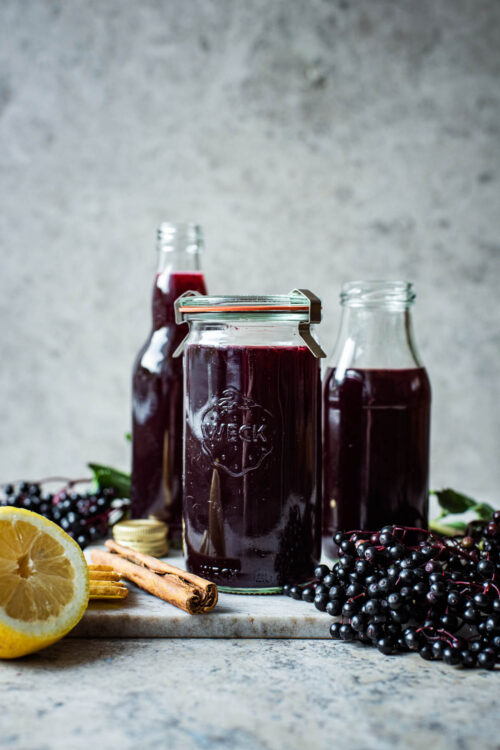 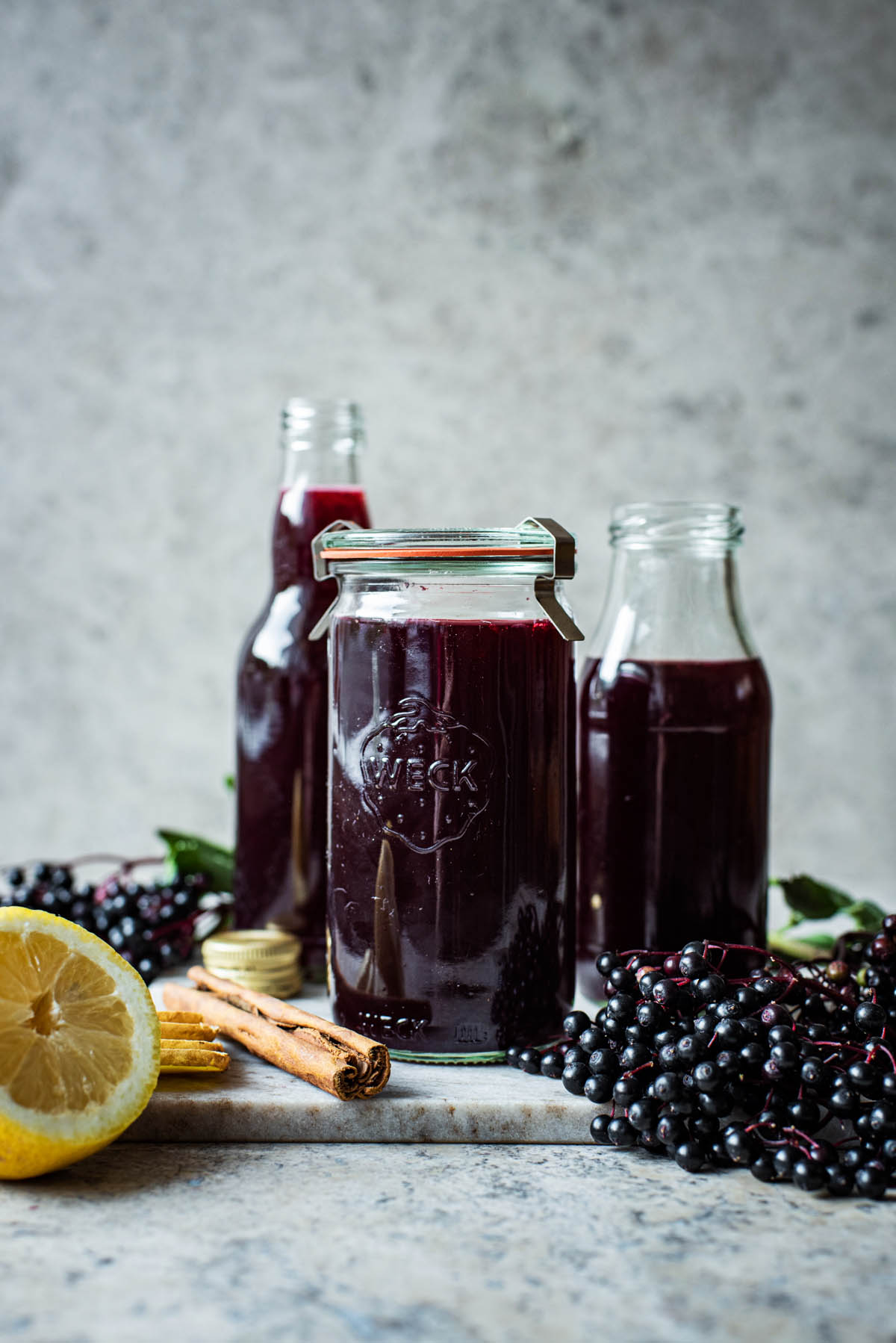 First off – what does elderberry syrup taste like? If you’ve never tried it, I’d compare to children’s Glühwein made from grape juice, or blackberry juice. This honey version is quite sweet and does have flavour notes from the honey, lemon, ginger, and cinnamon. It tastes like autumn and it’s delicious.

Elderberries are bitter and just a touch poisonous raw, but delicious cooked! Don’t eat them before cooking and try to keep the stems out of your mix. As always with any gathered foods, don’t pick and consume them unless you’re completely sure what they are, that they’re not exposed to anything dangerous in the area around, and that you’re not allergic.

This elderberry syrup makes good use of vitamin rich elderberries alongside ginger, honey, and lemon, for a sweet tonic for the colder months. Use it like cough syrup if you’re under the weather (1-2 tablespoons every few hours), take a tablespoon once daily (for adults) if not, or try mixing with sparkling water for a refreshing drink.

This is a partner recipe to my honey elderflower cordial, using berries from the same trees.

Medicinal usage of elderberries stretches back millennia, and it’s often included in medicines today. I take a tablespoon each day during autumn and winter to soothe a sore throat (especially good as this version uses honey instead of sugar). Some people swear by elderberry syrup preventing colds and a number of other maladies as it’s so high in vitamin C and antioxidants.

There is some peer-reviewed evidence of elderberry being helpful in reducing the duration of cold symptoms, but it needs more research – and though I wouldn’t compare elderberry syrup to doctor-prescribed medicines or preventative shots, it also doesn’t hurt. If nothing else it is nice for a sore throat.

Elderberries are often full of small bugs that you may not want to cook. It helps to spread the berry heads out onto a clean tea towel outdoors for about an hour before beginning on the syrup to give any insects time to move somewhere else.

The berries must be fully ripe. Most of the time this isn’t an issue because unripe berries simply won’t come off the tines, but if there are a number of green berries in your mix, pluck them out. I often have to pick before all of the berries on the tines are fully ripe as the birds pick the ripe ones off individually.

If you’d like, use raw honey for any additional benefits that come with that. The honey isn’t heated with the elderberry mixture. If you accidentally add the honey before simmering, don’t worry – the syrup is still useable, you’ve just cooked the honey and lost any of those potential benefits. It’s still good for a sore throat.

In my experience, this syrup keeps for several weeks in the refrigerator. Make sure there’s no evidence of mould or an unpleasant smell before using. Make sure the jars are sterilised (in the dishwasher, or boiled as you would for canning) to extend the shelf life.

I haven’t tried canning it as I don’t want to heat it after the honey is added, and I think it’d need a pressure canner to ensure food safety anyway. You could certainly can it in a water bath and then store in the refrigerator, though.

The syrup can be frozen for up to one year in a sealed container. If freezing, you should be able to get through the colder months with a good supply and simply thaw it in the refrigerator as needed.

I haven’t tried this with dried elderberries, but it should work. Use about half the amount of dried fruit and follow the other directions as written. Frozen can be used in the same quantity as fresh.

If you prefer, it is possible to make this with sugar or maple syrup instead of honey, for a vegan syrup. Sugar will have to be dissolved by briefly cooking it with the strained syrup but maple syrup can be used in the same way as honey.

Additional spices can be very nice – cloves, star anise, cardamom – to make a mulled wine flavour. If that’s what you’re going for, try adding some orange peels or zest to the elderberry mixture when boiling as well.

I’d had big plans to start an ongoing recipe and video series with wild and gathered foods with a friend in Germany last year. Of course, inability to travel due to the pandemic put a stop to that, and unfortunately there’s very little wild food in the Netherlands. Here are some older recipes using nuts, berries, and apples.

* This varies based on refrigerator temperature, etc. – if you see any hint of mould or the syrup smells off, toss it. I store one-third of the syrup in the refrigerator and have the rest in the freezer at any given time (so one small bottle in the fridge). • With ripe elderberries, it’s easy to remove them from the stems using the tines of a fork. • Make sure there are no stems in the berries, as this can cause bitter syrup, as well as being mildly poisonous. A tiny amount is fine. Wash carefully to remove any dust and bugs before using.