November 9, 2020 by Alexandra Daum
Pear cider makes a nice seasonal alternative to apple, with a slightly milder flavour and plenty of warming spices. This version is made partly with juice to speed up the process slightly.
Jump to Recipe 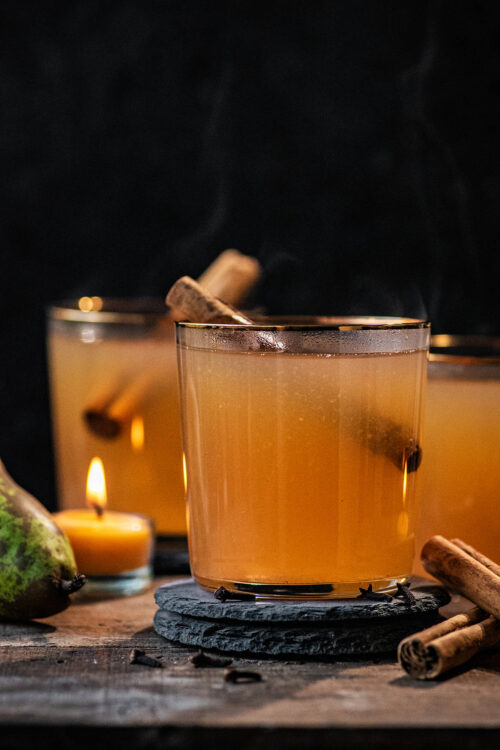 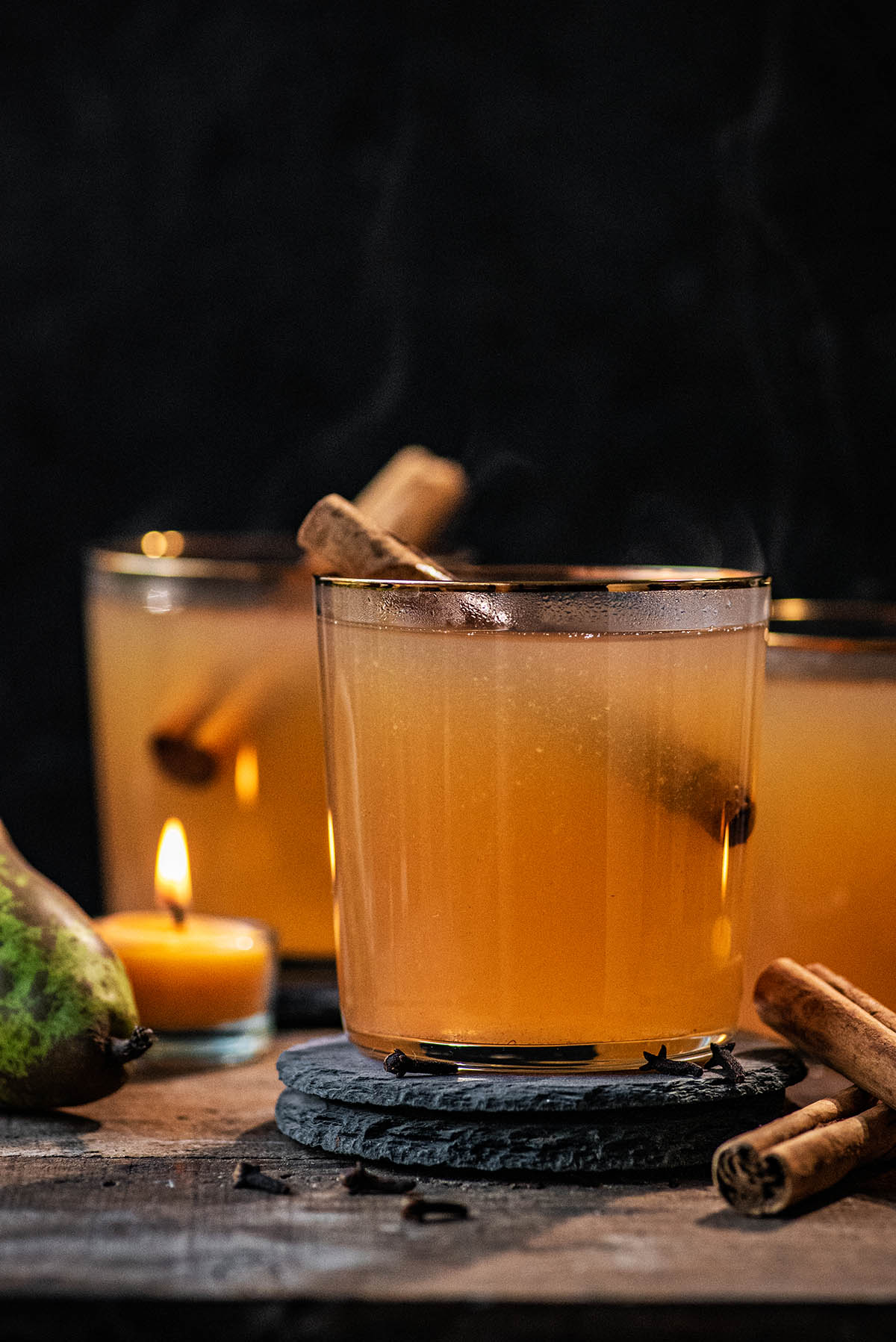 I’ve been getting loads of pears this year – they seem to have had a good season and are especially good right now. Since we can’t go into Germany to pick apples from my omi’s trees, I’m making do!

Pear cider is much like apple, really, but with a milder taste and I’d say it’s a touch less sweet. Ginger adds a bit of kick with cinnamon and cloves adding that classic cider flavour. If you have some pears and aren’t sure what to make (other than pear crisp), or they’ve gone around the bend a bit, this is a lovely comforting autumn drink.

Since I don’t have a slow cooker or pressure cooker, I’ve gone with a slight shortcut here in using half pear juice in place of water. This means a shorter cooking time but with a great flavour. Don’t worry if you can’t get pear juice – see the substitutions section.

Cut the pears into quarters and remove any seeds and pips. Add the pears to a large pot with the juice, water, ginger, cinnamon, and cloves.

Cook the cider, with the lid cracked open, for an hour and a half. You can increase the cooking time if the taste isn’t strong enough and it needs to go for longer – just taste at the 90 minute mark and cook down until the flavour is to your preference. Strain through a fine sieve, pressing on the pears to mash them, and serve hot.

If you have a slow cooker, all the better! Pop everything into your cooker and let it go for about four hours, covered. I’m afraid I haven’t used a pressure cooker in years and can’t give a timeframe on that, but I’m thinking about 20-30 minutes should do it.

To make a cocktail, add a half shot of rum or vodka for each glass.

Keeping the lid cracked during cooking is a key step. The cider needs to cook down a bit in order to have a strong enough flavour, and it can’t do that in the allotted time if the lid is on the pot. It’ll make your house smell great.

Unfortunately it’s not possible to save the pears, as they’re pushed through the strainer (this is part of what makes for the classic cloudiness of cider). It’s best to use pears that you wouldn’t be eating fresh for this if you’re worried about wasting the fruit.

Although Conference pears are pictured, I typically use a specific stewing pear variety for pear cider. I don’t know if stewing pears (I use St. Remy) are widely available but any type will work.

Don’t worry if pear juice isn’t available. Either use apple juice for a blend of the two, or go with all water and increase the cooking time by an hour. If you use all water, you’ll likely need to sweeten with a bit of maple syrup or honey after straining (to your taste).

Use spices you like. If cloves are a bit strong, or you don’t like them (the flavour isn’t particularly pronounced here) then go for star anise or cardamom.