A savoury vegan pie filled with sweet potato, chickpeas, and spinach, mixed with plenty of Indian spices for a nice curry flavour. Best in autumn or during the transition times between seasons. 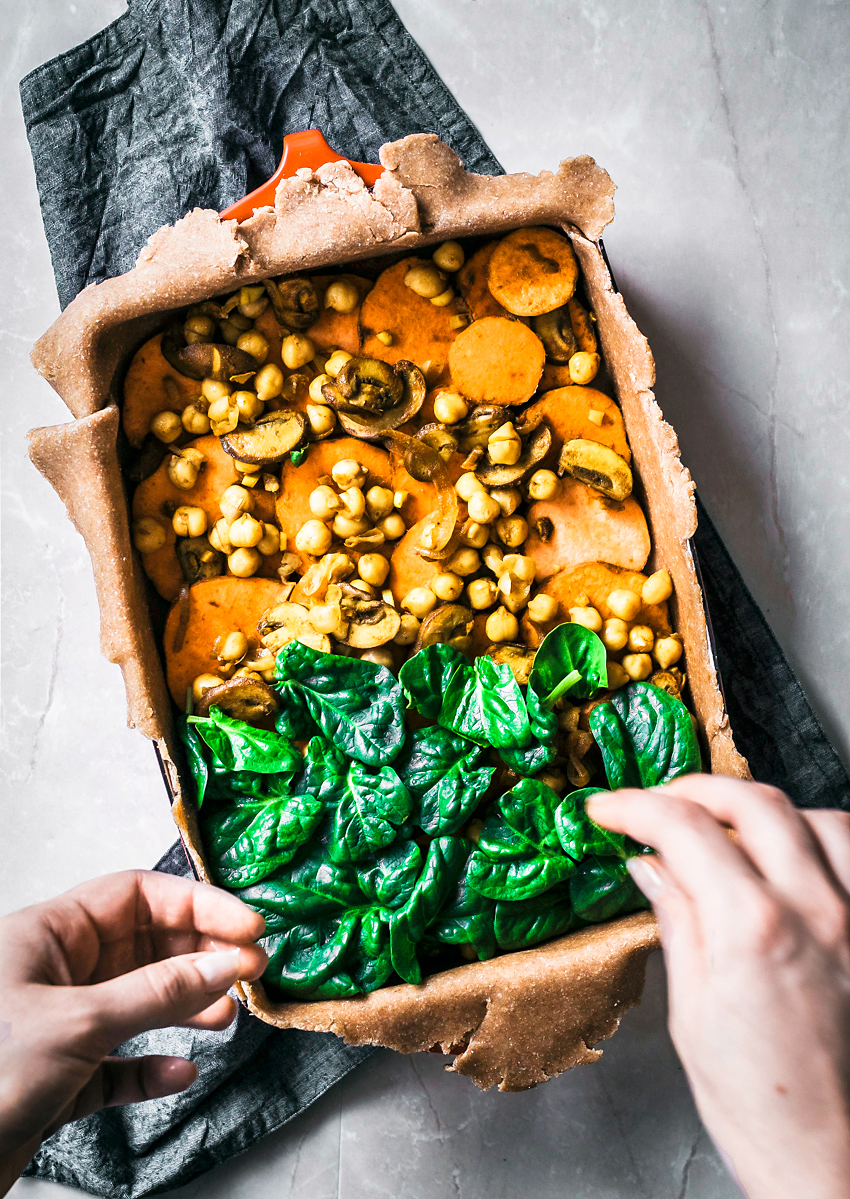 This recipe has seen a few trials and errors (mostly errors) but I’ve landed on this super tasty and fun savoury vegan pie with sweet potato, mushrooms, chickpeas, and spinach, packed with curry flavour.  The original idea was a samosa pie made just with potatoes and peas but it was way too heavy.

The pastry is a speedy spelt one made in the food processor because I got a little frustrated with hot water crust and this was easier. I’ve made this pie with a few different pastry types but this was my favourite, and it’s all whole-grain, so you can feel good about eating that third piece of pie. Living life to the fullest over here!

Here’s the slightly tricky thing about this recipe. You have to cook a bit of the filling before baking it, but it doesn’t take long. I tried making it without cooking off the onions and mushrooms and it was kind of awful – even Graham made a bit of a yuck face and he eats everything, so that step can’t be skipped.

Since you’re frying a bit anyway, the spices get mixed in to improve their flavour before being added to sliced sweet potato, then layered with spinach or another leafy green. I’m a bit uninspired and sick of root vegetables so this is a way to liven up what’s available at this time of year before spring stuff starts coming in. Just add a little curry, right? Curry and cookies to get through the next month of rain-induced grouchiness.

If you’re looking for a different Easter main dish, this would be great, but it’s also nice just as a weekend dinner. Hypothetically you could make this on a weeknight; it doesn’t take that long to prep, but I can’t see myself doing it after a full day of work. If you’re not comfortable with making your own pastry, just buy some good stuff and use that instead. This is pretty forgiving even if you’re not a pie master, which I’m obviously not, hah. It’s rustic. The pastry is more crisp than flaky, typical of a pie made with coconut oil instead of butter.

The idea was to make this as a freeform pie without a baking-form, but my friend Svenny lent me a whole pile of beautiful pots and pans that she recently inherited. She also hand modelled for me for an afternoon and it was probably the best workday I’ve had in the past year. What an angel. I ended up making the pie in a rectangular form (around 8×6 / 20×15) as a slab pie, because who has pie pans? (You, probably.) 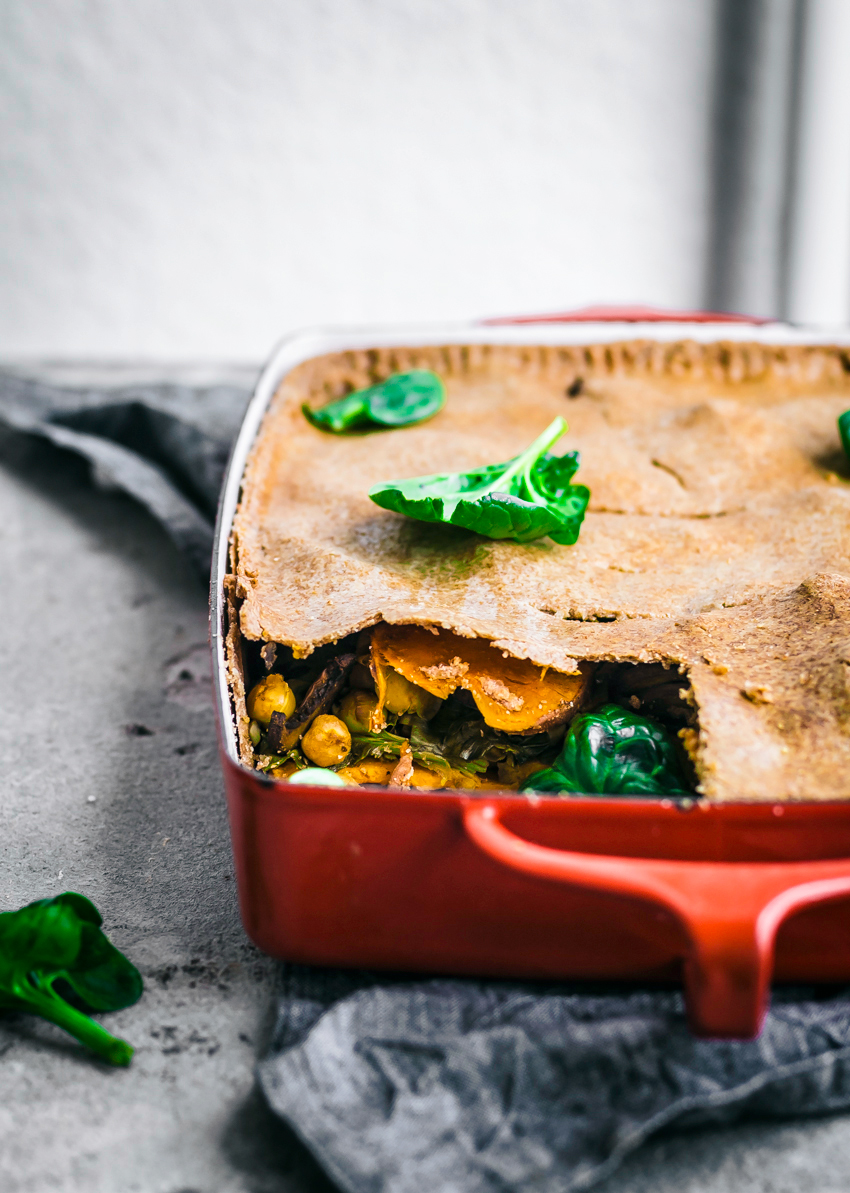 * If you have an extra large pan, the chickpeas and sweet potatoes can be mixed right in it instead of using a bowl (and dirtying an extra dish).
• If you're not vegan, you can top the pie with an egg wash before baking for a more golden crust. 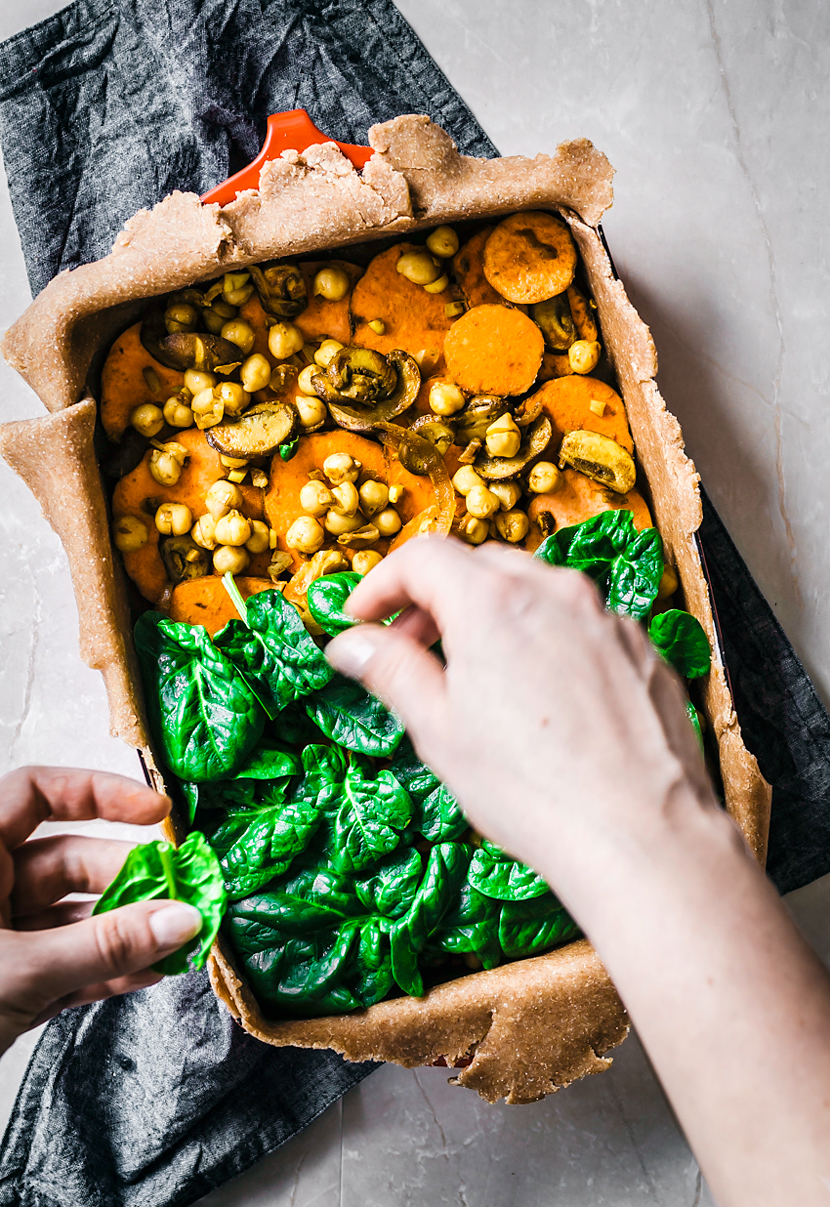