January 3, 2018 by Alexandra Daum
Vegan pasties filled with leeks, caramelized onion, and green peas. Pasties are a traditional Cornish pastry recipe, with savoury filling enclosed in pastry. This vegan version uses a coconut oil spelt mix for the pastry and a very nontraditional filling that I imagine adamant traditionalists would frown at – it’s a modern, plant based interpretation!
Jump to Recipe 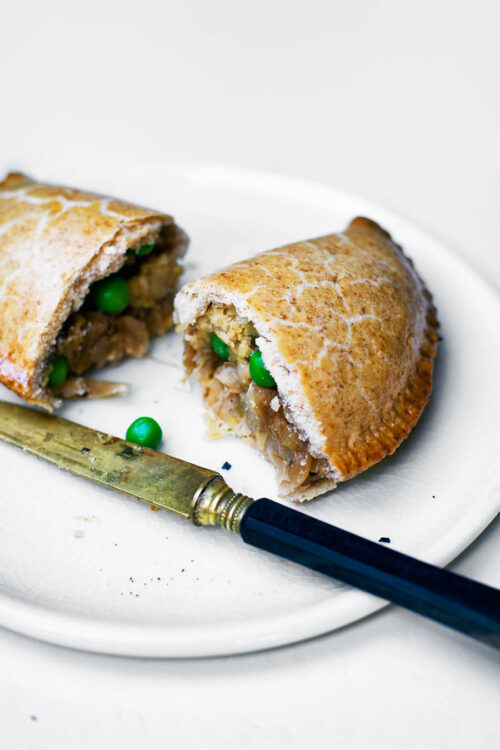 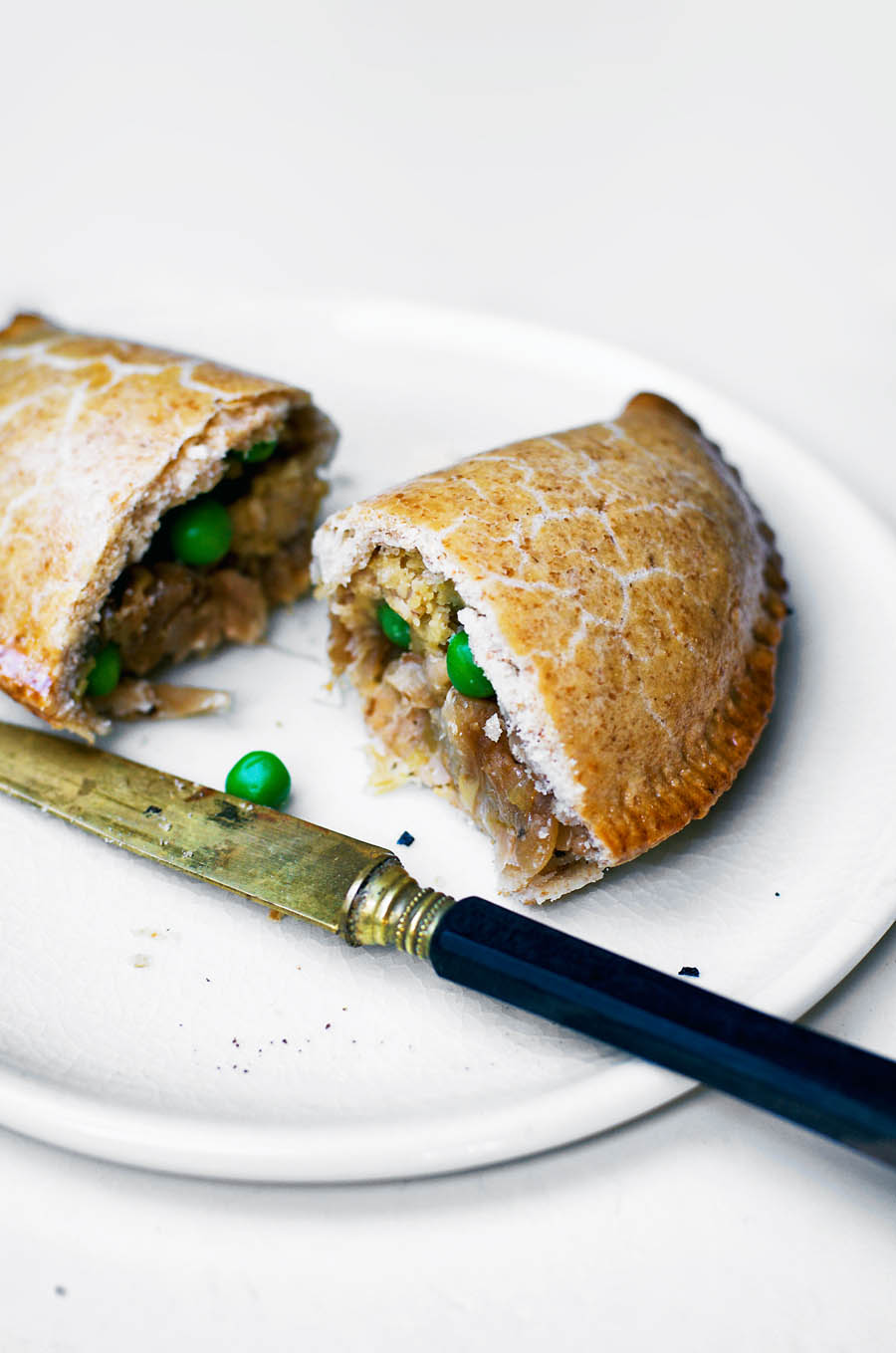 If you’re from Cornwall, I apologize for taking your famous dish and making it vegan. I had an idea in my mind of a vegan Cornish pasty and just couldn’t shake it. Even though I’ve never eaten a Cornish pasty, it’s been featured often enough on Bake Off that it seems familiar. Nadia, a winner of bake off, got in deep trouble for daring to add peas to the classic recipe, so I’m sure vegan pasties are rather worse.

The outer pocket is a coconut oil spelt pastry that’s much easier to make than regular butter pastry, I think. You just pop it in the food processor and let it do the work, and no worries about keeping everything ice cold. It’s not as flaky as butter pastry but it’s a bit flaky, and a lot crispy. Perfect for vegan pasties.

About the filling – I’ve chosen caramelised onions alongside leeks, peas, little white beans, and lemon, on top of a little hummus. I see several variations of this in my future (definitely mushrooms) but this is a great winter option using frozen peas with cold weather vegetables.

If you’re looking for another good vegan pastry recipe, check out my vegan holiday pie with hot water pastry.

The only trick is not to overfill the pasties so that you can close up the pocket, but you can always pull a bit of the filling out if need be.

If you don’t want the extra step of caramelising the onions, you can sauté them with the leeks instead. I encourage you to make a huge batch of caramelized onions and freeze the extras, though, because they’re a great addition to just about everything.

These freeze very well, and can be frozen before baking. Simply freeze on a parchment lined tray and, once frozen, transfer to an airtight container. Bake from frozen.

You can use a milk wash (for vegan) or egg wash (vegetarian) on the outside of the pasties, but it’s not about taste, just appearance. Adding an egg wash makes the pasties more golden, and not including it will result in a slightly lighter pastry.

* I make this pastry with a mix of different spelt flours. Here I did half whole and half light, but it works well with fully light and whole spelt as well. Avoid bread flour. ** I used a cereal bowl to make the round imprints in the pastry and then cut them out with a butterknife. If you’ve been blessed with a nice pastry cutter, and you can use that instead.