December 9, 2016 by Alexandra Daum
Vegan banana chocolate muffins are made a bit more exciting here with a square of dark chocolate in the middle of each muffin, and a healthier streusel topping. Sweetened mostly with ripe banana and made with whole wheat flour & oats, these are a super healthy and tasty snack.
Jump to Recipe 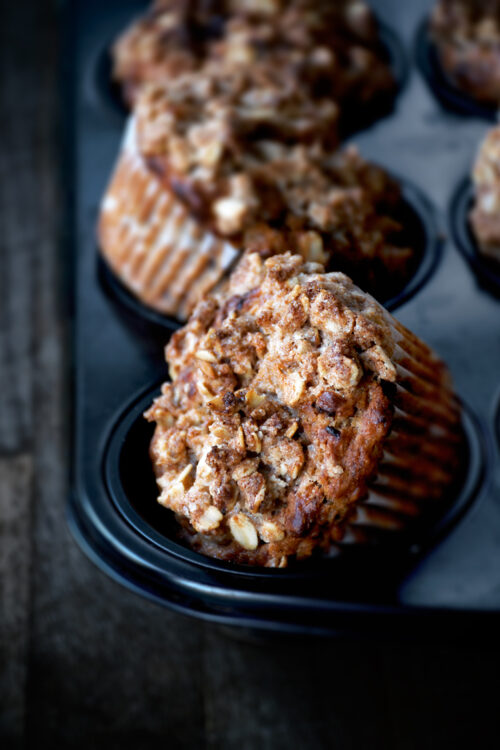 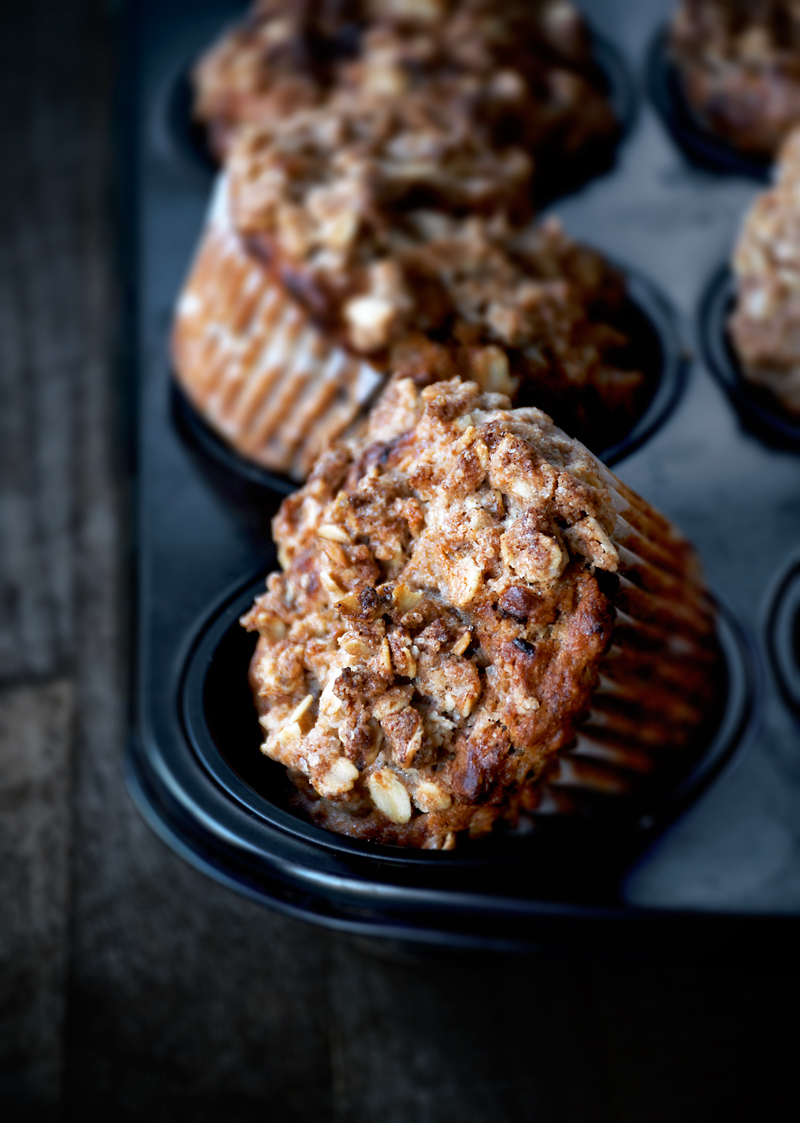 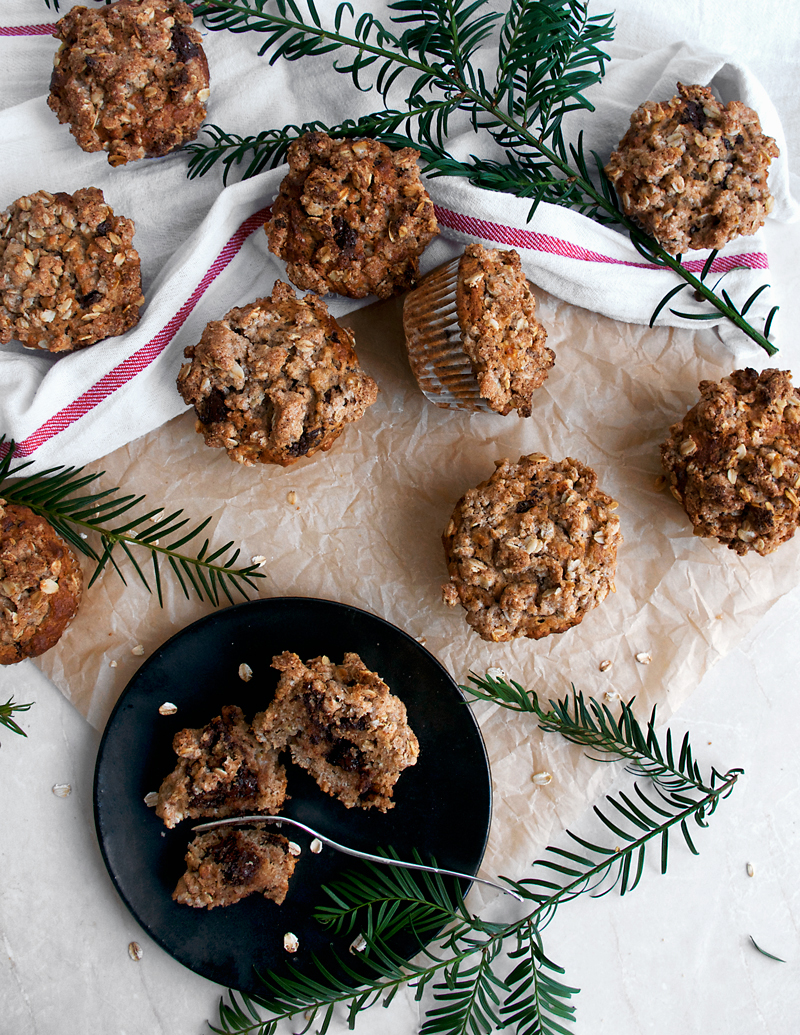 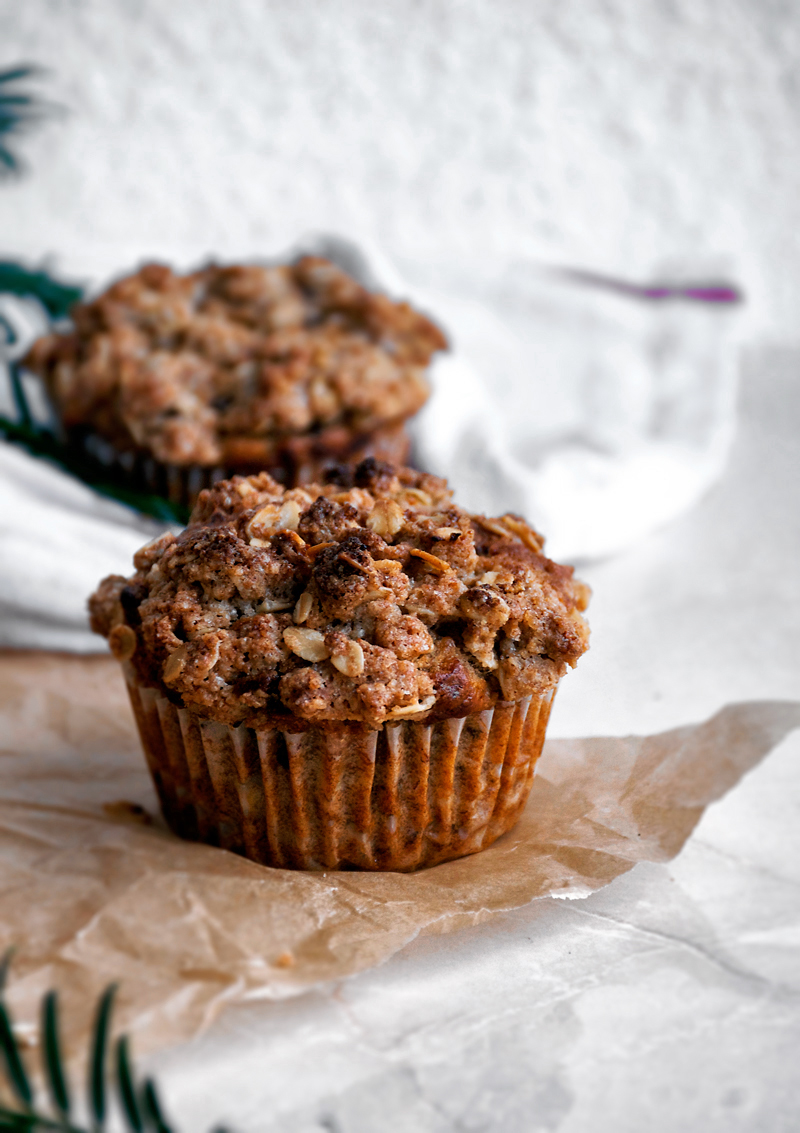 With just over two weeks until Christmas, I feel ill-prepared for holiday fun. I used to have all my gifts ready by October, and now I’m going shopping tomorrow (eek) for cards and small gifts to send home. I’m crossing my fingers that the packages will get there in time!

We’re dog-sitting for friends starting this week and staying at their house in the forest for almost three weeks, and I think that’s part of the reason I don’t feel as holly jolly yet. We didn’t really bother decorating our house because we won’t be here. I’m so excited to hang out with a dog, though, and she’s such a sweetheart.

This healthy & vegan banana muffin recipe has been in the works for months now – I originally made it as a banana bread when we first moved in September, and I only had a few basic ingredients in the house. It ended up being the best banana bread I’ve ever tasted, and it knocked our socks off. I really love it in muffin form, with the chocolate surprise centre, but you can just as easily make it as a loaf instead.

The entire recipe only has a half a cup of (healthier) coconut sugar, including the streusel topping, but the ripe bananas more than make up for any loss of sweetness. Oats add a little texture, and dark chocolate is always a good idea. If you don’t like chocolate, try adding a little dried fruit in its place or just leave it out. This recipe uses whole spelt flour, but I imagine it would also work with other flours if you don’t have spelt.

I know there are a million banana bread and banana muffin recipes out there, but I promise that this one is both foolproof and truly delicious. It’s naturally vegan, and doesn’t include any extra binding ingredients like chia, flax, or starch (!) because all of my latest recipes have been working fine without them.

The original version of this recipe used chia, but the bananas hold everything together instead. This makes the muffins a little more decadent tasting and cake-like despite the lack of added sugar. I have another banana bread recipe from the very beginnings of this blog, but this one is my new favourite and, honestly, a million times better than the old recipe. As an extra bonus, the batter has only ten ingredients!

I eat at least two of these muffins a day when they’re in the house, but you can freeze them if you have super self control. If they’re only going to be frozen for a little while, place them in an airtight tupperware and freeze them as is. If you’re planning on having them in the freezer for a month or two, wrap them in tin foil and then place them in a container to freeze. If you make the loaf and want to freeze it, wrap it in foil and then plastic wrap or another airtight container.

Make sure to eat one of the muffins while it’s still warm, and you get that molten chocolate centre! 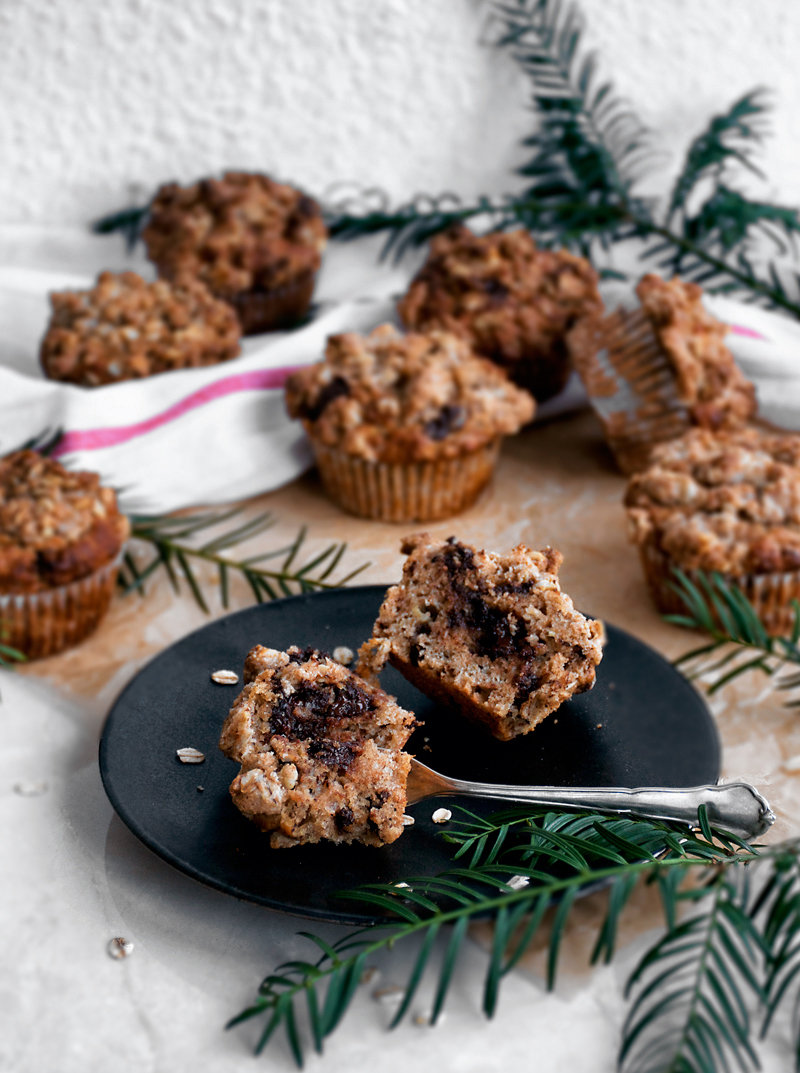 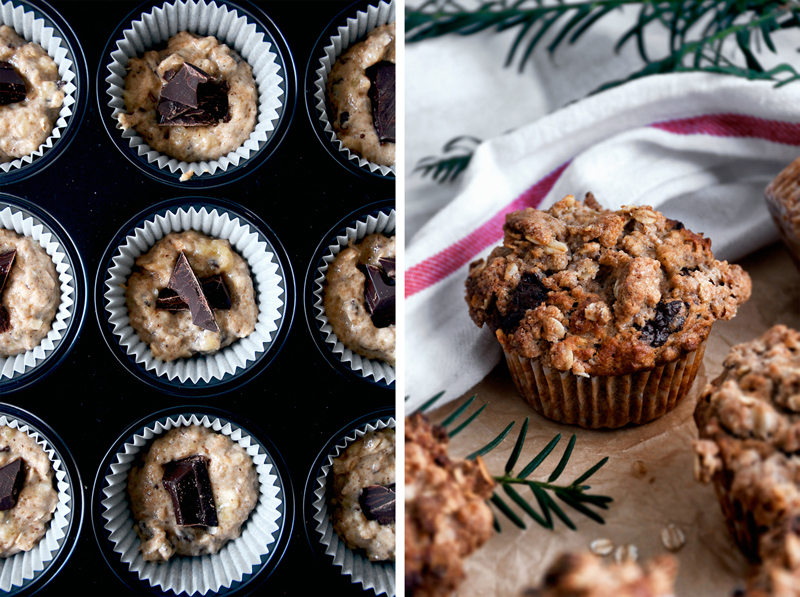 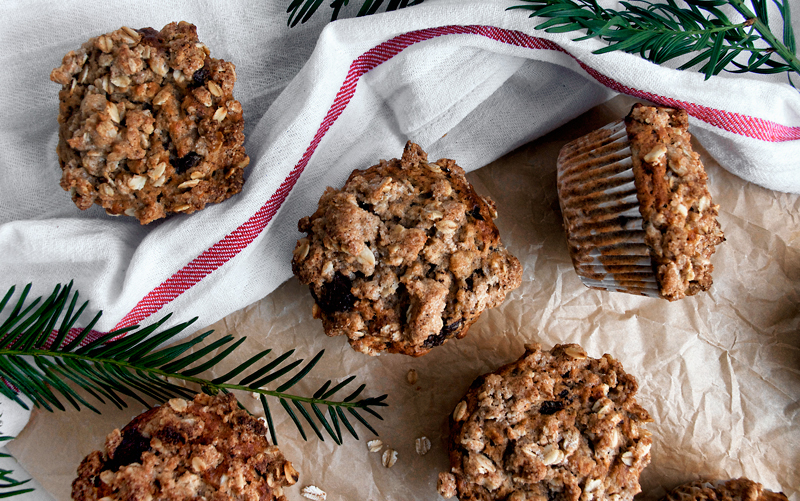 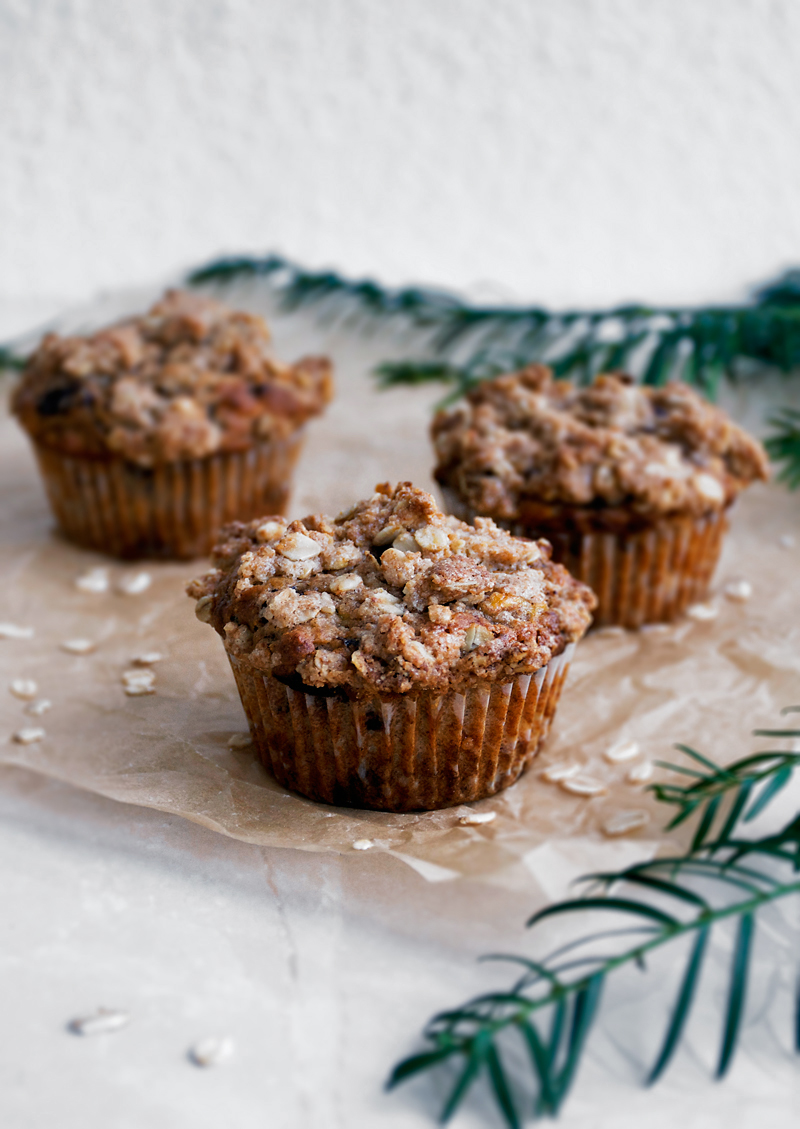 • To make a loaf instead, mix everything according to the instructions and then bake the batter in a greased loaf tin for 50-55 minutes, or until a toothpick comes out clean. Cool for 30 minutes in the pan and then cool completely on a rack. You can either leave the extra chocolate out or layer it in to the centre of the loaf.
* You can use coconut oil in place of olive, or substitute a light tasting liquid oil like grape seed. The muffins will be slightly denser when they cool if you use coconut oil. 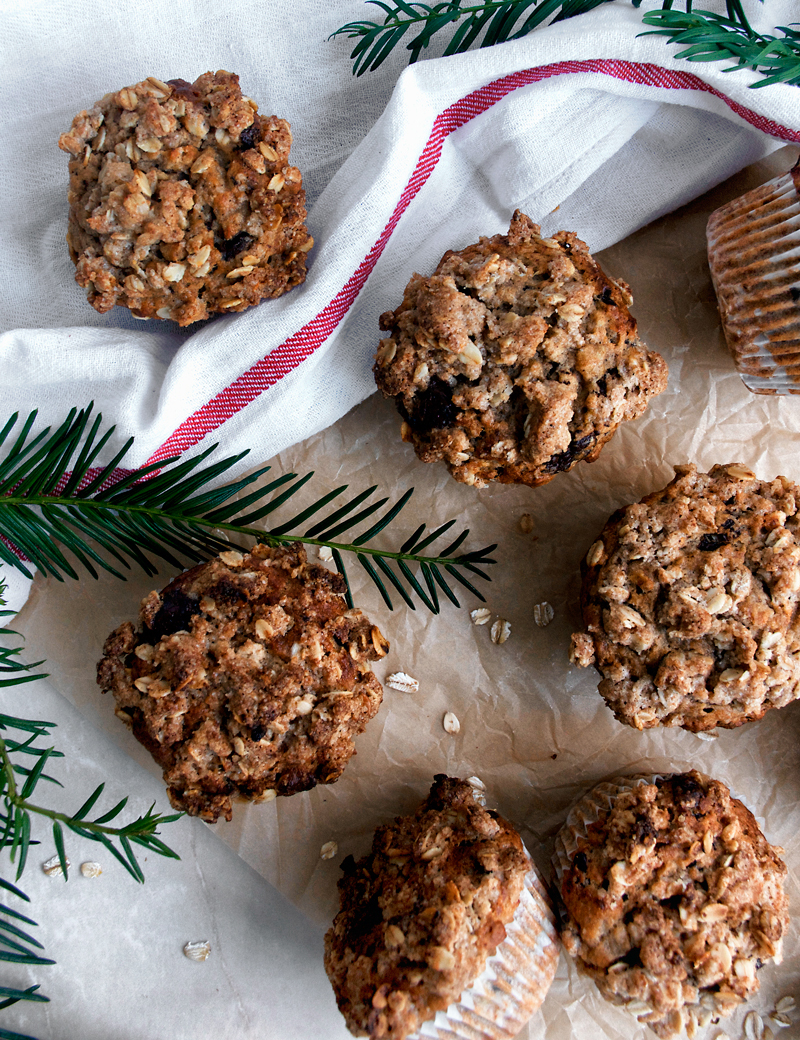