November 9, 2014 by Alexandra Daum
This healthy, gluten free and vegan cranberry tart is made with a pumpkin seed and oat crust, creating a crispy, crumbly base. With fresh cranberries, raspberries, and orange.
Jump to Recipe 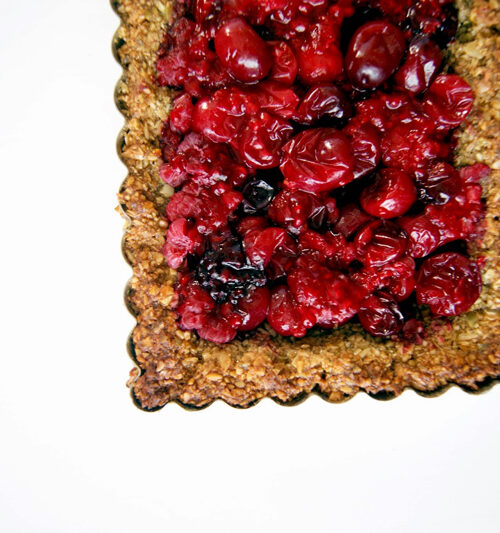 This fresh cranberry tart is a super simple dessert that looks like hours-in-the-kitchen fancy. It’s great for holidays (thanksgiving, I’m looking at you) or impressing your in-laws.

It has a crunchy and lightly sweet crust, and the filling is tart but not sour thanks to the addition of raspberries. You can use pretty much any fruit you’d like. Apples would be good with the cranberries, too.

I think it’d be really nice at Christmas, and that’s why I came up with this recipe. I was hoping for an extra festive green crust but forgot that pepitas turn golden when they’re baked. Still festive. This type of seed and oat crust is a favourite – it’s so easy, just having to be pressed into the tin, and tastes great. I use it, or a variation, in plenty of other recipes (like this chocolate orange tart).

2. Honey can be substituted for the maple syrup in both the crust and the filling.
3. You can use cornstarch instead of arrowroot powder.