January 14, 2020 by Alexandra Daum
Sourdough waffles with the option to use a true sourdough starter or yeast, for a more intense flavour and a nice chewy texture. Fluffy inside, crispy outside, and the batter is waiting for you when you wake up!
Jump to Recipe 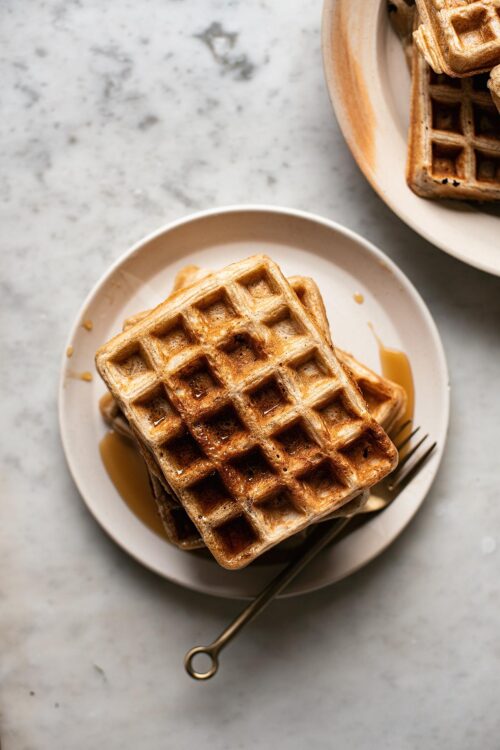 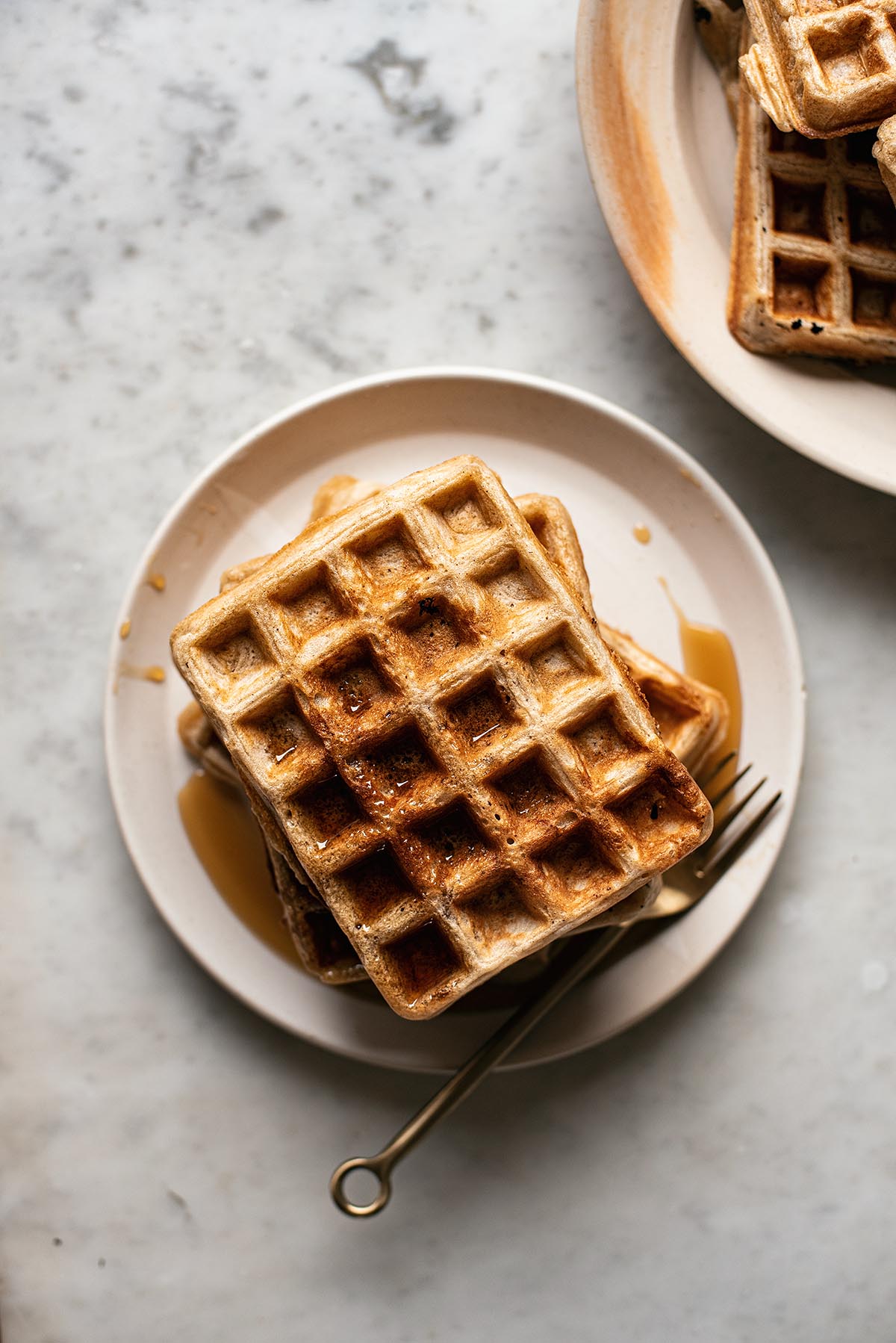 This was originally shared in March 2018. It has been updated with improvements to the recipe, new photos and step by step pictures, and a video as of January 2020.

I make waffles a handful of times every month, often with some seasonal variations tossed in – blueberry, pumpkin, apple – but these sourdough waffles are hands down my favourite. They’re so easy, always bake up perfectly, and, best part, they’re prepped the night before.

Vegan waffles can be a bit fiddly to get right. Usually you need some kind of starch or other binding agent (banana, applesauce) and the texture can be wonky. With sourdough starter, though, they’re spot on without adding anything!

This recipe uses spelt flour (see below for subs), so the taste is more complex and a little nutty. They’re overall much more interesting than normal waffles. The outside is still crisp, with a nice soft inside, and a slightly chewy texture.

There is a fairly significant flavour difference from the sourdough, but it’s pleasant rather than overwhelming. If you’re looking for diner style waffles, though, this is not that. The taste is more mild than with a long-ferment sourdough bread, but there is a bit of tanginess.

If you tend to get a bit bloated or some slight stomach upset from normal waffles, you might be able to digest sourdough waffles a bit more easily, much the same as with bread. I usually have a bit of trouble with waffles but these ones are easy on the stomach due to the fermenting process.

Sourdough Starter or Discard for Waffles

If you have an active sourdough starter and only use it to make bread, you’re discarding a lot of useable starter. This is a great recipe to make use of some of that discard! When you feed your starter, use the discard to mix up a batch of waffles instead of tossing it in the compost or whatever you do with it.

It does need to be quite active, though! If you’re storing your starter in the refrigerator, the discard from feeding it that first time won’t be strong enough to give these waffles a good rise. If that’s the case, you’ll want to use a starter that was fed about 12 hours beforehand, just like you would to make a loaf of sourdough bread.

What I’m saying here, is that if you feed your starter daily, the discard from that will work well. If you only bake once a week or so, use a starter that’s been fed and is active. Need a good recipe for less active discard? Try these sourdough crackers.

Please note that this recipe requires a 100% hydration starter. Mine is made with rye flour, but any active starter will work well.

Couldn’t be easier! You can see the process more clearly in the video or in the step-by-step photos below. Everything is mixed in one bowl, there are just 7 ingredients with no weird additives or hard to find ingredients.

After mixing, simply cover to rest overnight at room temperature (no need to clear out a shelf in the fridge) and then bake the following morning. The batter can rest for anywhere from 8-16 hours so there’s a flexible timeframe if you need it.

Depending on the type of waffle iron you have, the cooking time will vary. I’ve only used the one pictured and the type that makes thin heart-shaped waffles, but I’m certain this recipe will work in any kind of iron. Either way you’ll get some great waffles!

Don’t have a starter? That’s fine, you can use yeast instead! A teaspoon of yeast will do the trick and can be subbed in for the starter. The flavour won’t be as pronounced, and they’ll be slightly less chewy, but they’re still good.

The recipe calls for spelt flour – this can be either light or whole grain – but all purpose, whole wheat, or other ancient grains like kamut or einkorn all work well. I haven’t tried making these gluten free.

Any kind of dairy-free milk with the exception of canned full fat coconut milk can be used here. Dairy milk, as is the case 99% of the time, can be used as well if you don’t need them to be dairy free. The waffles will have a slight yogurt scent if you use dairy milk.

* Light or whole grain spelt will work well, and all-purpose can be substituted for spelt. See above for more substitution guidelines. ** Any light tasting oil is fine – grape seed, avocado, sunflower, etc. • How you bake the waffles will vary between irons; I fill mine 90% full or it doesn’t reach the edges. Baking time will depend on the kind of iron you have. They should be golden but not overly browned as they’ll lose the softness inside if overcooked.