July 15, 2020 by Alexandra Daum
Gluten and grain free granola made with seeds, coconut, and maple syrup - a healthy, tasty breakfast or snack, made without nuts, eggs, or dairy.
Jump to Recipe 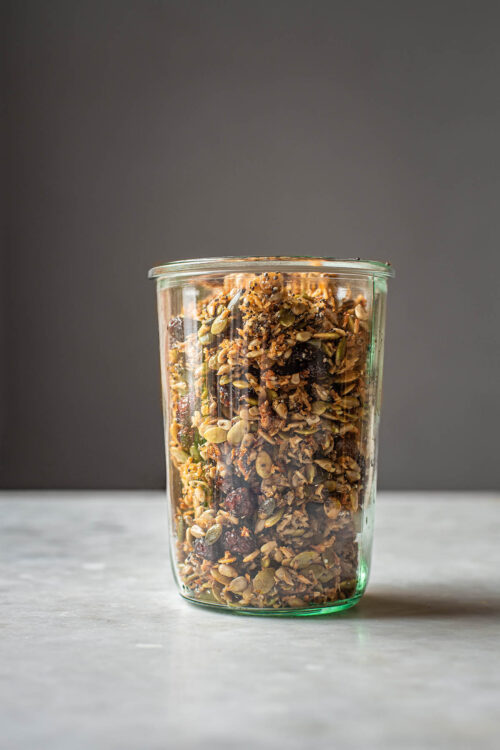 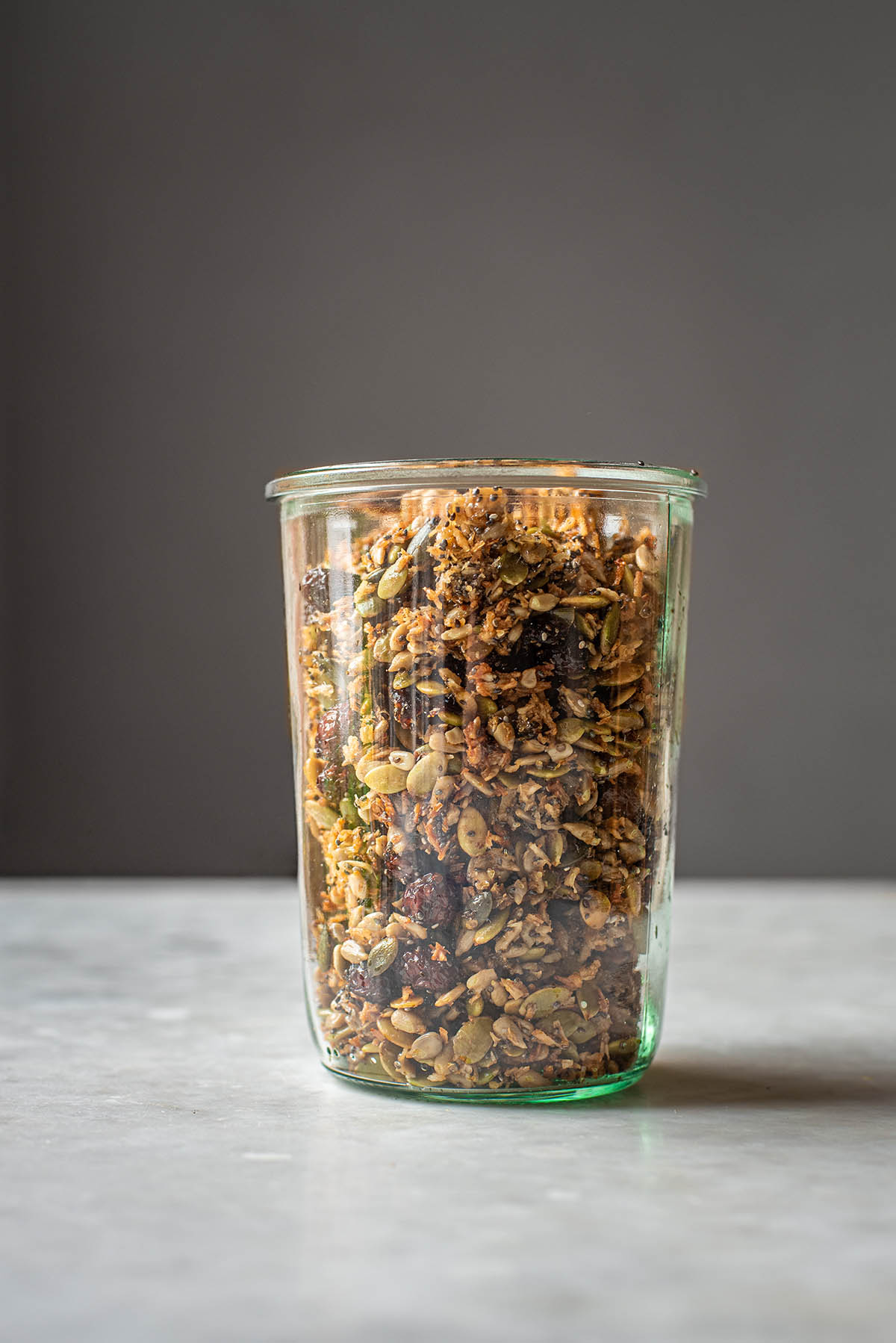 This post was originally published in August 2016. It has been updated with new photographs and improvements to the recipe and text as of July 2020.

A really simple recipe, this grain-free seed granola doesn’t include oats, so it’s exactly right for topping a bowl of porridge for a bit of crunch! I love granola on my morning oats but it can be a but of an oat overload. This one doesn’t have nuts, either, so it’s both budget and allergy friendly.

It is a bit of a change from my standard olive oil granola but I love the textures here – very crunchy, with the chewiness from the seeds. It’s extra crispy from using coconut oil, too. This is a great go-to year round recipe.

Line a large baking sheet with parchment (this is important, greasing the pan doesn’t work nearly as well) and preheat the oven to 150C (300F). If you have a baking sheet with higher sides (see images below) I always find them to be a bit nicer for granola.

Mix all of your dry ingredients in a large bowl, then add the melted coconut oil and maple syrup. Mix it all up, using a wooden spoon or your hands. Spread this onto the prepared sheet and bake for about half an hour, or until evenly golden in colour.

Cool fully on the tray, then break it up, add the dried fruit, and store in jars or a sealed container. Letting it cool is key, as the coconut oil is part of what makes the large pieces and adds crispness. It needs to solidify to ensure that everything holds together well.

Serve with chia pudding (this was originally shown as a chia parfait with berries), non-dairy milk, yogurt, or my favourite, as is with some fresh or frozen berries.

The granola will be one large clump once it’s cooled on the tray, so you can break it up into the piece size you like. I know people are really into very clumpy granola so if you want giant chunks, go for it. I’m more about fitting it on a spoon when I eat it.

Make sure your oven isn’t running hot when you bake this – if it’s quite hot, it’ll burn very quickly. That’s why it needs a lower oven temperature (I’m saying this because my oven sometimes runs 50C too hot, thanks Ikea).

This is important! Don’t add the fruit before baking, it’s mixed in after the granola is already baked. It will burn if you try baking it. This goes for any dried fruit.

The bigger the baking sheet, the better. I have the European oven-size sheets, so I just use one. If you’re using a standard cookie sheet, you might want to split it over two to get the nice clumps and an even baking time.

Sub the sunflower and pumpkin seeds however you like. Some sesame seeds would be great, or you can do nuts instead (slivered almonds would be nice). Don’t remove the chia seeds, they help to bind the granola.

You could perhaps use flake coconut instead of shredded, if it’s all you have on hand, but it will change the texture of the granola significantly. The original recipe called for flake coconut to be added in after baking but I didn’t like that as much with later tests.

Any spices can be added or changed around – cinnamon is the basic one. Lebkuchen spice, or pumpkin pie spice, add a bit of nutmeg or sumac, anything you like. A little orange zest would be good here too.

As usual, runny honey can be subbed for maple syrup, which is what I most often do as maple syrup is extraordinarily expensive here, and shipped in from Canada. Just don’t do this if you’re making it for vegans.

The recipe calls for dried cranberries, but as mentioned above, raisins are equally good, and you could also use dried mango, or blueberries, or any fruit you like. Since it’s being added after baking, it doesn’t matter how large the pieces are.