March 30, 2019 by Alexandra Daum
These healthy puffed quinoa tahini bars are sweetened only with dates, and filled with pepitas, pistachios, and a little cinnamon. Topped off by a layer of dark chocolate, they're just right for snacking or as a not-to-sweet dessert.
Jump to Recipe 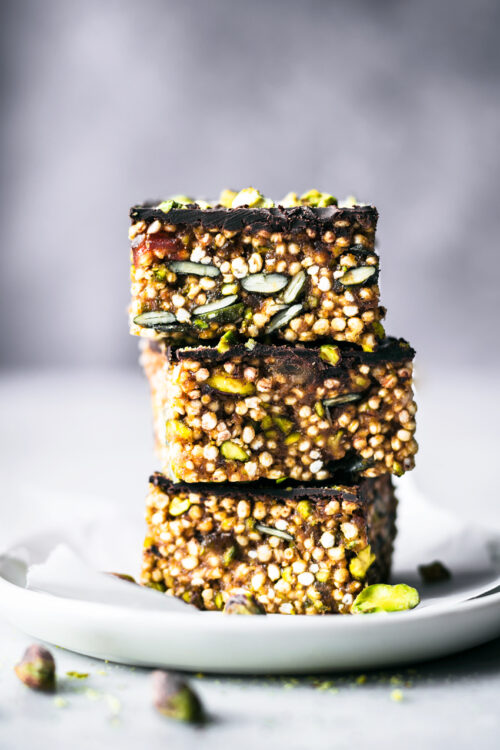 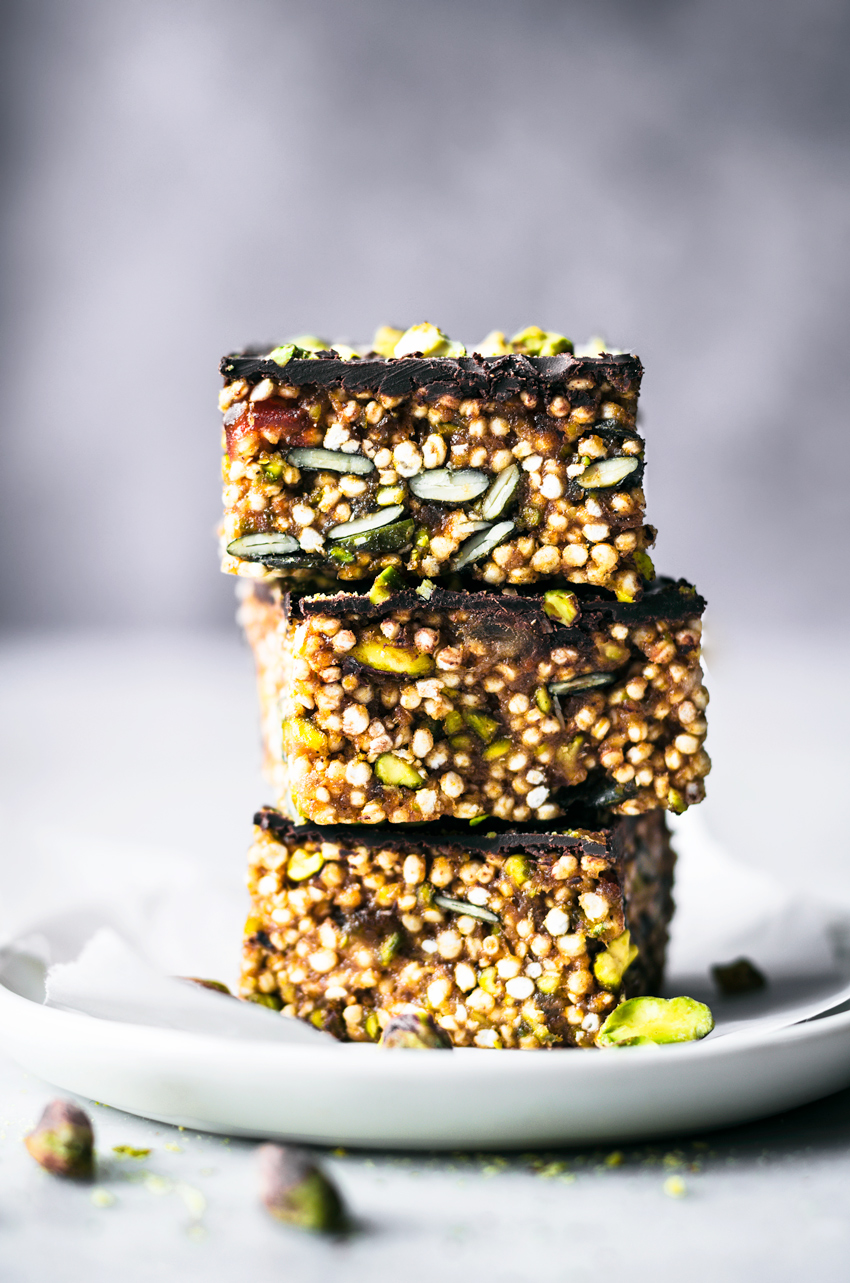 Still no kitchen over here – we ripped the old one out last week, and my uncle and cousin came to help us out. Due to unforeseen circumstances (i.e. our total lack of experience with renovating) we took most of the day to frame in, insulate, and drywall the existing cement wall and didn’t have time to install the new kitchen while they were here. My cousin is an electrician and completely redid the electrical in the house, and he has to finish that in the kitchen before we can get everything in, so it’s waiting another week.

Right now we don’t have a stovetop, because it was gas and we capped the line, so it’s toaster oven only for a couple of weeks. One week down, one to go! It’s fine. I have a bunch of new stovetop-free recipe ideas for you now and didn’t realize how much I rely on it, even when roasting or baking part of a meal. We also didn’t hook the kitchen sink back up to the drainage pipe, so there’s a bucket under the sink for a very low tech grey water system. Fascinating, right? Don’t you love the new skip to recipe button at the top of (some) posts?

That’s all food related, though, and this recipe is reflective of 1. not having a stovetop now to test recipes with, and 2. not wanting to share oven-friendly recipes because I know my toaster oven is way off with temperature and cooking time. We don’t need unreliable recipes around here. These puffed quinoa tahini bars are no bake all the way, and we’re moving into warmer weather in any case now. (I also got a chunk of the garden in today, more on that another time.) 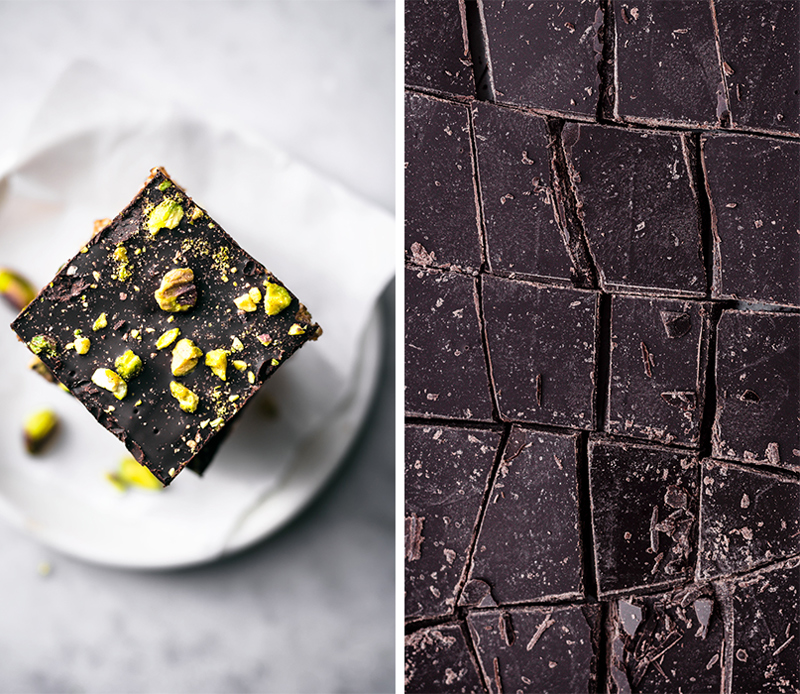 Some of you might know my chocolate puffed quinoa bars, which are a bit simpler than this tahini version. These follow the same base concept, but I’ve switched out the nut butter for sesame paste, added in some green in the form of pistachios and pepitas, and ditched the cacao in favour of a chocolate topping. We’re sticking with dates for sweetening, no honey or maple syrup needed.

I’ve been making that recipe with different add-ins for years, but this version is the best one so far. It’s also completely plant-based (vegan), gluten free, and sugar free depending on the chocolate you use. Win, win, win.

A good bit of cinnamon, combined with the tahini and pistachios, turns these quinoa bars into a more complex and adult snack. The first time I made them I was skeptical as tahini can be so bitter, but it works. It’s not crazy sweet by a long shot, but a bit, and very smooth and well rounded. If you like Persian and Levantine flavours, these are for you – or just if you’re a fan of tahini. That being said, of course you could sub it out for another nut or seed butter if you really want to.

I know I usually talk a bit about substitutions, but I really think these flavours deserve to be tried at least once as is before changing things around. If you want a simpler recipe that can easily incorporate additions, try the other puffed quinoa bars, it’s essentially the same base recipe. The only thing I’d suggest as a good change would be to use chopped walnuts instead of pumpkin seeds, because that’s what I had written in the original concept and I couldn’t find walnuts. Or to make these nut free, just leave out the pistachios.

It’s a very simple recipe, no stove or oven time needed. All you need is a food processor, blender, or a fork and a lot of patience. I’ve outlined the recipe below using a food processor, but if your dates are very soft you can mash them with a fork and then stir in the remaining wet ingredients.

In essence, you blend the dates with the tahini and nondairy milk, then mix it in to the puffed quinoa and everything else. Press it into a lined container, top with dark chocolate, and pop it in the fridge. An hour later, puffed quinoa bars! If you’re very impatient, they can go in the freezer for less time before cutting.

If all goes to plan, I’ll have a kitchen a week from today. That means there won’t be a new recipe next Saturday, but you know I’m going to be baking like crazy after three months without an oven, so get ready for some bread shortly after that. 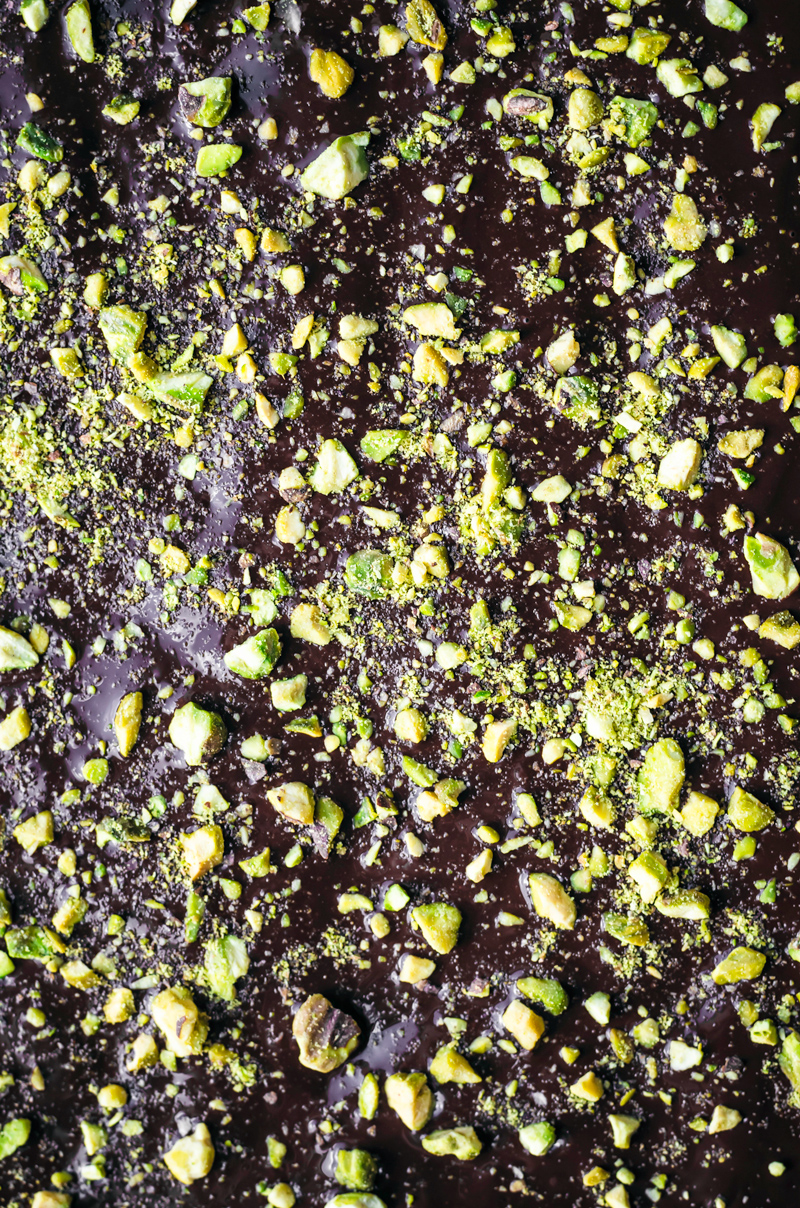 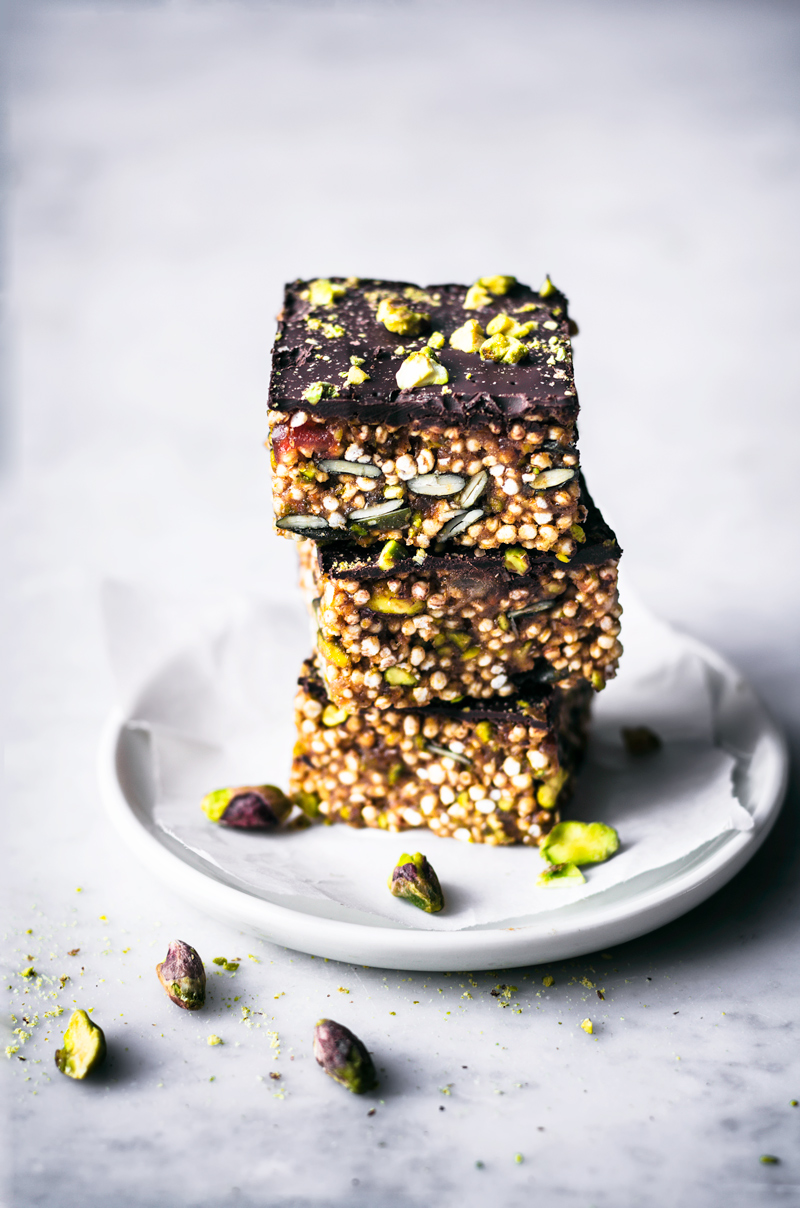 • A square baking tin in this size isn't necessary, because you're not baking these bars, but it makes it easier to cut them into equal sizes. Any kind of square or rectangular container will work as long as it's close to those dimensions. • To have the bars set more quickly, freeze them for 10 minutes before adding the chocolate layer, and then freeze for another 15-20 minutes before cutting. * Try to use a runny tahini here. If your tahini is quite thick and dry, you may need to add another splash or two of milk to the mixture. ** Blending the tahini and dates before adding the milk prevents it from splashing everywhere before the dates break up. If you mix everything at once, it's just messy.
© Alexandra Daum
Cuisine: North American
Print 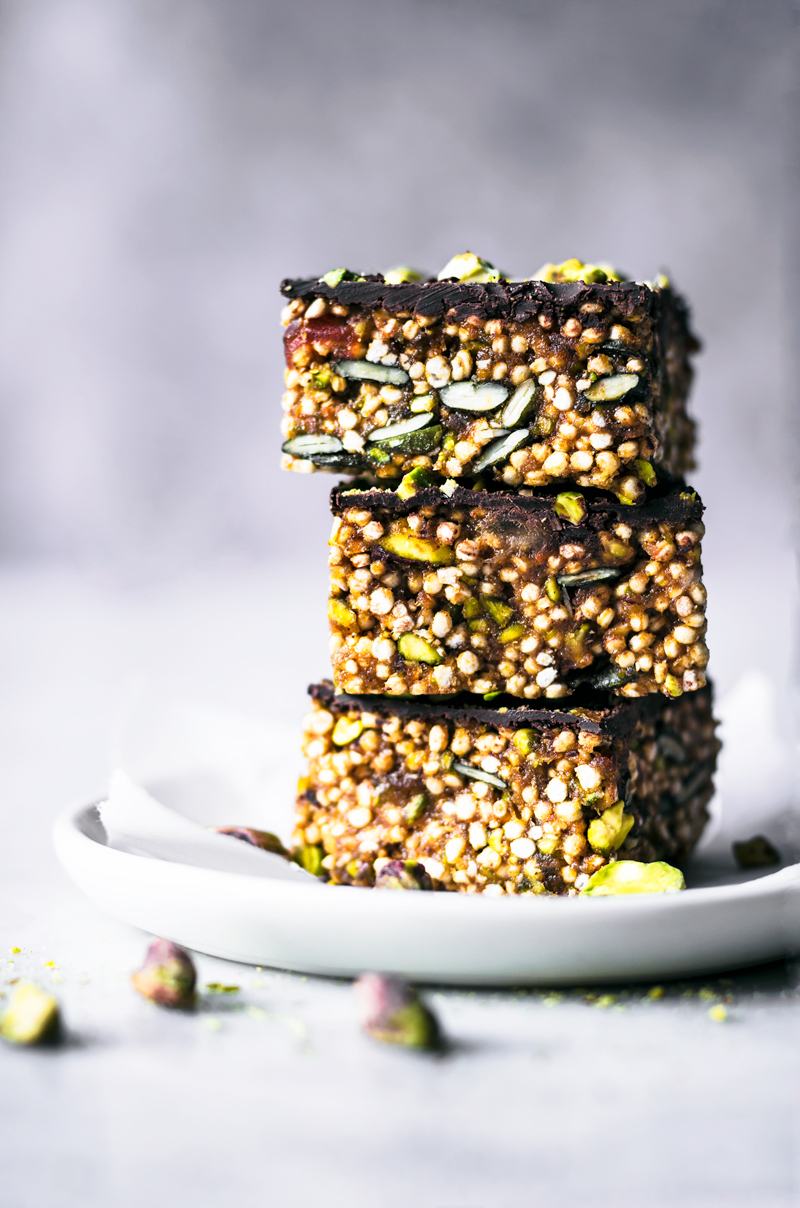