August 5, 2020 by Alexandra Daum
This traditionally vegan socca, or farinata, is topped with a spring cucumber and lentil salad for a fresh and light dinner. Socca is gluten free, made with chickpea flour, and very high in protein - and it tastes great, too.
Jump to Recipe 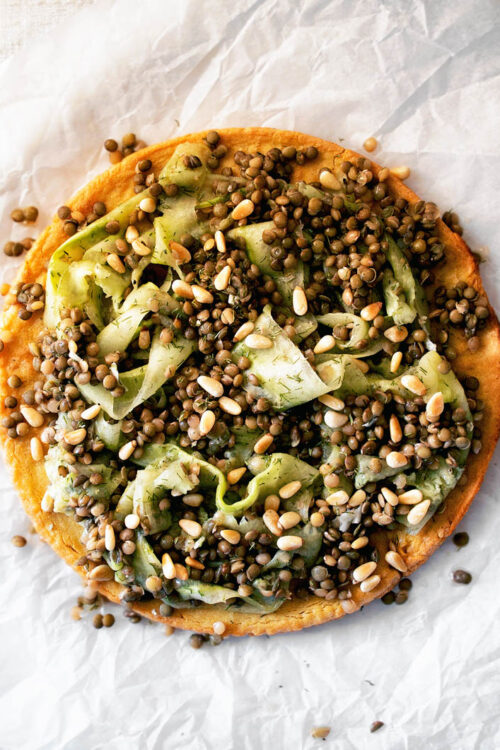 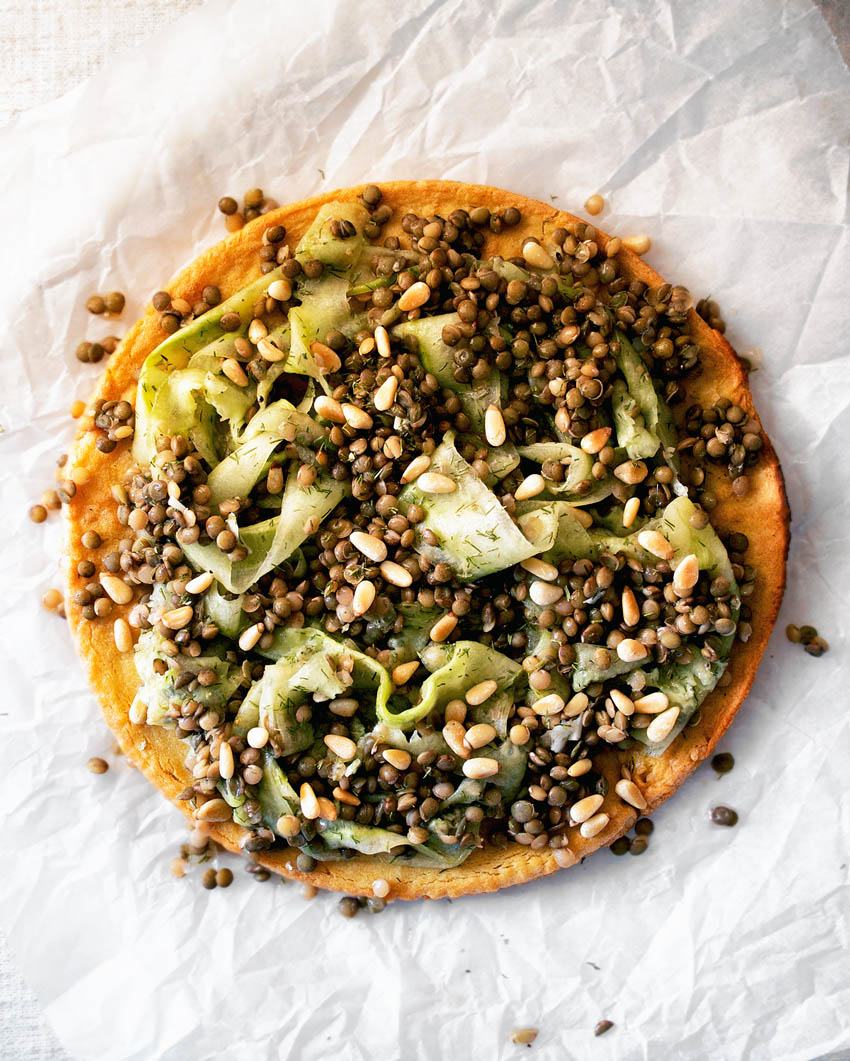 This post was first published in May 2016. It has been updated with improvements to the text and recipe as of August 2020.

If you’re not familiar with socca or farinata, it’s a simple unleavened pancake made with chickpea flour. The dish originated in Genoa and it’s commonly eaten in areas of Italy and France. Socca is very easy to make and traditionally vegan – I often make it as a quick weeknight meal because it takes just a few minutes to make and it’s very filling.

The socca batter does need to sit for an hour before you cook it though, so keep that in mind. If you don’t have chickpea flour in your pantry, don’t worry! You can find it in most grocery stores and in Indian or South Asian markets, where it might be labelled as gram flour. It’s cheap, cheap, cheap.

Chickpea flour is often used for savoury meals like socca, but it can be used in sweets too – like this gluten free strawberry rhubarb crisp or gluten free chocolate cookies – and makes an excellent egg replacer. I use it as a binder in things like red lentil falafel and other burgers. So it’s a good flour to have around!

This version of socca includes garlic in the batter and I’ve topped it with a fresh salad. It might not seem like a full meal, but with the chickpea flour and the lentils, it’ll definitely fill you up.

First off, start by mixing your socca batter. This needs to be done an hour before baking, so either do it in the morning (it can sit up to 12 hours) or in enough time before you get truly hungry. Whisk the chickpea flour, water, olive oil, garlic, salt, and pepper, then cover and set aside. Cook the lentils in the meantime if they’re not already cooked.

Once the batter has rested, it can be baked. Preheat the oven with a cast iron pan inside (see tips for stovetop). Once the oven and pan are hot, add the coconut oil followed by the socca batter. Bake it for about 15 minutes, or until the sides and top are golden.

While the socca is in the oven, make the salad. Thinly slice the cucumber, then mix it with the lentils, dill, lemon juice, olive oil, salt, and pepper.

Once the pancake is finished, take it out of the pan and place it onto a large plate. Top with the salad and any extras (herbs, nuts) and serve immediately.

Socca doesn’t store very well – it dries out after a while, so it’s not very good on the second day. If you have leftovers, cut it into strips and pan fry in a little oil to crisp a bit and heat through.

To make this on the stovetop, heat a large frying pan over medium heat. Add the coconut oil, then fry it like a thick crêpe. The edges should appear quite dry before flipping.

The cucumber salad is more of a suggestion as a topping than the only possibility. I more often make socca and top with a simple green salad, because I have greens in the garden year round, unlike cucumbers. But it’s excellent when cucumbers are in season.

You can change up the flavourings going into the pancake to suit your tastes. I like adding herbs (basil and thyme are favourites) or spices like cumin and turmeric. Leave out the garlic if you don’t like it, or fry some mushrooms and onions to pour the batter over before baking.

Black (beluga) or brown (mountain) lentils make good substitutions for the green lentils, but red lentils and the large varieties aren’t very good here. Additional herbs, or different ones, can be added apart from the dill in the salad – or make this vegan cucumber salad and toss some lentils in.

• I used a vegetable peeler to get the cucumber to look the way it does in the pictures.