A pumpkin chocolate cake for my 25th birthday, with two layers and a beautiful chocolate glaze. Vegan, pretty healthy, and super pretty – made with spelt flour, coconut sugar, and olive oil. 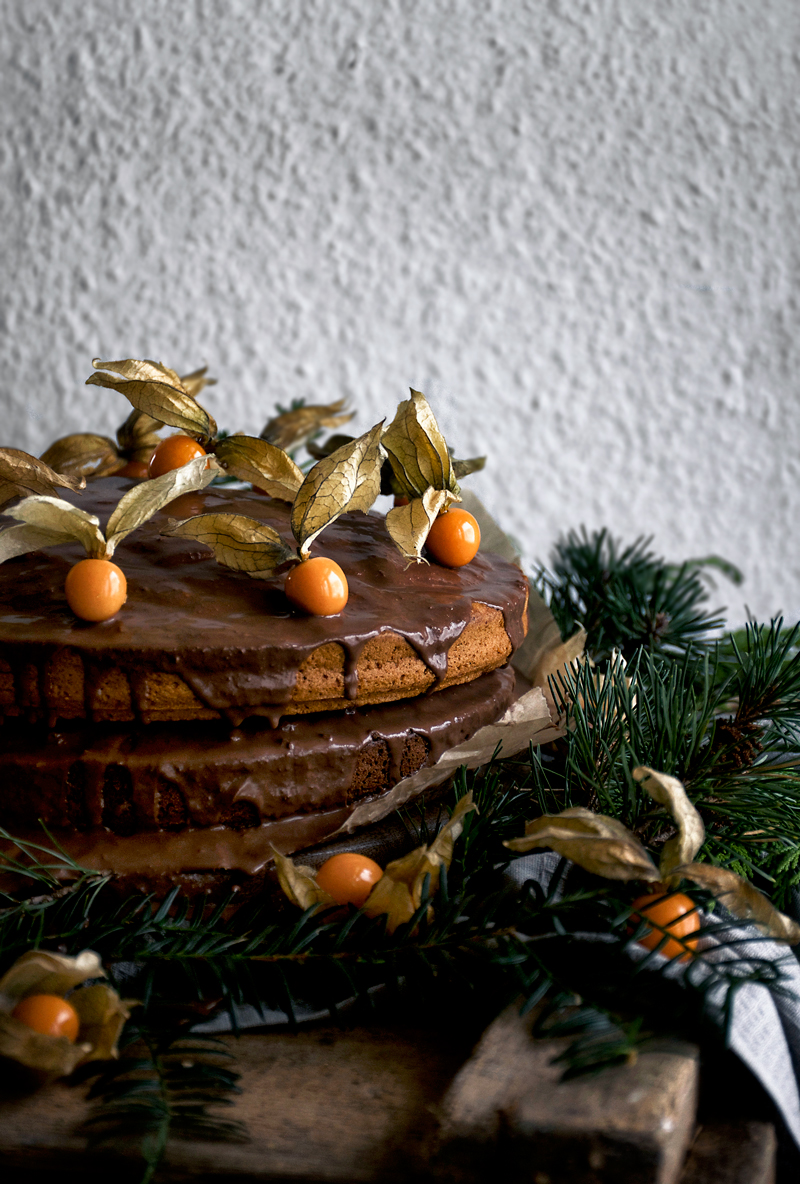 It was my birthday on Wednesday, so I made a vegan pumpkin and chocolate layer cake to celebrate! I’m 25 now,  and my age has started to show a little bit this year in the form of a sprinkling of white hairs and the beginnings of crows feet.

I panicked when I first found the white hairs, especially because I thought I was a few years away from that, but I’ve gotten used to it now. All I can do is take care of myself and wear sunscreen, and the rest is genetics, right? I’m not sure if sunscreen matters quite as much here since it’s never sunny but I’m wearing in anyway.

The Christmas markets started this week too and all the decorations are up around the city now, and it’s cute and kitschy and very German. I started a praktikum, kind of like an internship, at a pottery studio earlier this week as a trial period to see if the master potter hires me on for a six month term or not. So far I’ve been making a lot of ceramic mushroom tree ornaments and I’m in love.

This is my third birthday cake since starting this blog. A fun thing about doing these posts around the same time every year is seeing how my photography has changed over time (thankfully for the better) especially since I’ve starting dedicating more time to taking pictures.

Last year my family showed up while I was trying to take pictures of the cake – you can see my brother’s-in-law hand in the first image for that recipe. The first time, I shot on a white coffee table with a sheet of white paper behind to try to get a seamless background. Graham took a peek and called it sad looking, but if you want to see it, you can find it here. They’re both good recipes but I think this is by far the best one yet.

I had planned to do a four-layer cake, and you still could use this recipe to do that if you have smaller cake pans. Mine are the standard 26cm / 10 inch and I think to get the type of tall layers I wanted it’d have to be an 8 inch pan or smaller. You could double the recipe and make four cakes in total but it’d be enormous if you did that, because it’s a big cake as is.

It’s very pretty with just the two layers, though, and much easier to do. I wanted to add coconut whipped cream to the mix but the craziest thing happened when I was whipping it. My cream turned into butter! I have no idea how it happened but if I can replicate it I’ll share it here. I still haven’t found a brand of canned coconut milk that makes good whipped cream in Germany.

If you have any suggestions, please let me know! They don’t seem to behave the same way. If you want to make coconut whipped cream, it would be a nice addition to this cake, especially between the two layers after the glaze has been added. 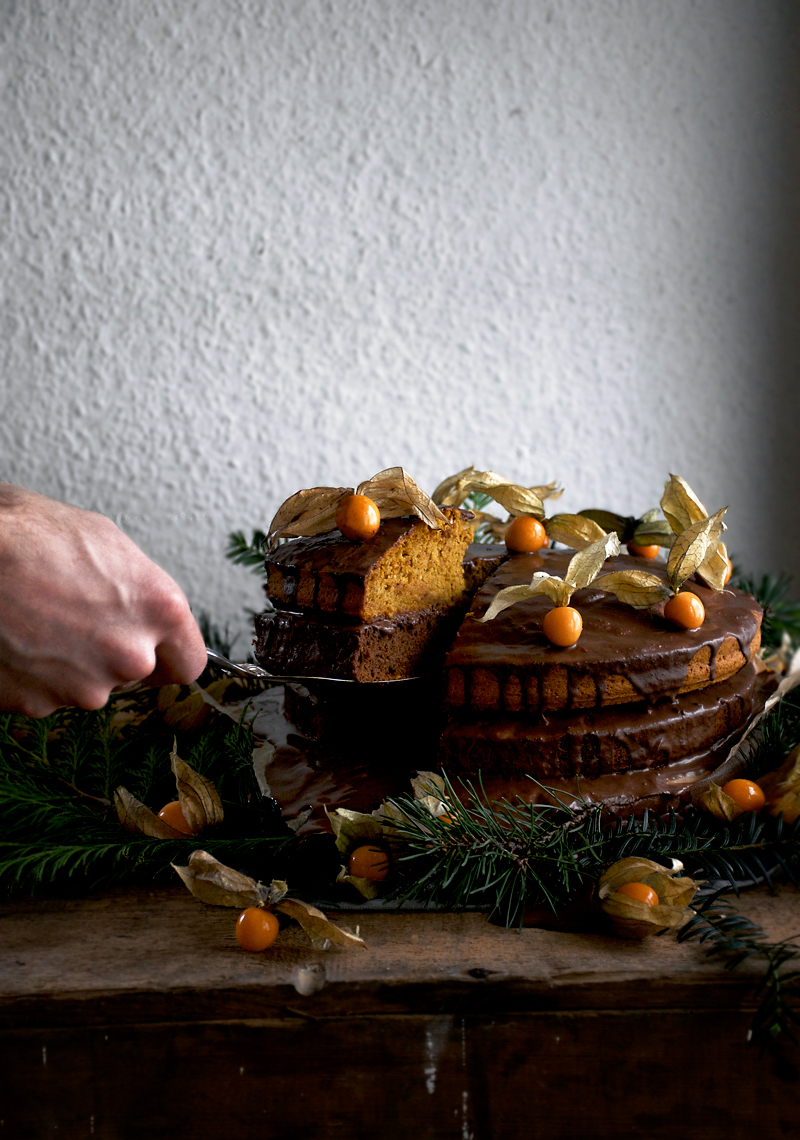 This cake wasn’t very enthusiastically received by my family at first. I guess pumpkin isn’t used as much for sweet recipes here as it is at home, and isn’t as widely used overall. Pumpkins originated in the Americas (the oldest evidence is in central America, although they were also extensively grown further north) and unlike tomatoes they don’t seem to have become as much of a staple here. It doesn’t help that hokkaido is virtually the only variety available.

My aunts were skeptical of a pumpkin cake, my youngest cousin outright refused to eat it or the pumpkin cinnamon buns, and my omi thinks the only thing you can make with pumpkin, really, is soup. Everyone except my pokemon obsessed cousin had at least one piece after a little convincing and they loved it, but next time I might just say it’s cinnamon and forget to tell them about the vegetable hiding in there.

There’s a (coconut) milk chocolate glaze poured over both of the cake layers, which is delicious, but will make a huge mess if you’re not careful. I wrote a tip below for an easier way to glaze the cake without as much chocolate going everywhere. The cake layers aren’t tooth achingly sweet but the glaze adds a little extra bit of sweetness that makes it into more of a celebration dessert.

If you can’t find physalis to top it with, try some toasted nuts instead or simply glaze it. I think this would be a beautiful cake for the holidays, especially if you added some Christmas spices like nutmeg and cardamom. The chocolate cake is a good basic recipe that could be adapted in a number of ways on its own.

If you bake both of the layers at the same time, try to have them on the same rack if you can so that they bake evenly. The chocolate cake cooks a little bit faster anyway though so it doesn’t matter too much. I’ve chosen to use all sifted or light spelt for the layers, but you could do half whole and half light if that floats your boat.

This is one of the few times I won’t use whole grain flour and I think that’s fine. It’s still vegan, low in sugar, and uses healthy fats and real, whole food ingredients, because it wouldn’t be one of my recipes if it was full of junk, right?

There are plenty of notes at the bottom of this recipe with possible substitutions and tips, so make sure to read those before starting to make the cake. It seems like a lot of recipe but you don’t have to cream sugar with butter or any of that shit so it doesn’t take as much time as you’d think. Plus, you don’t have to spread icing! 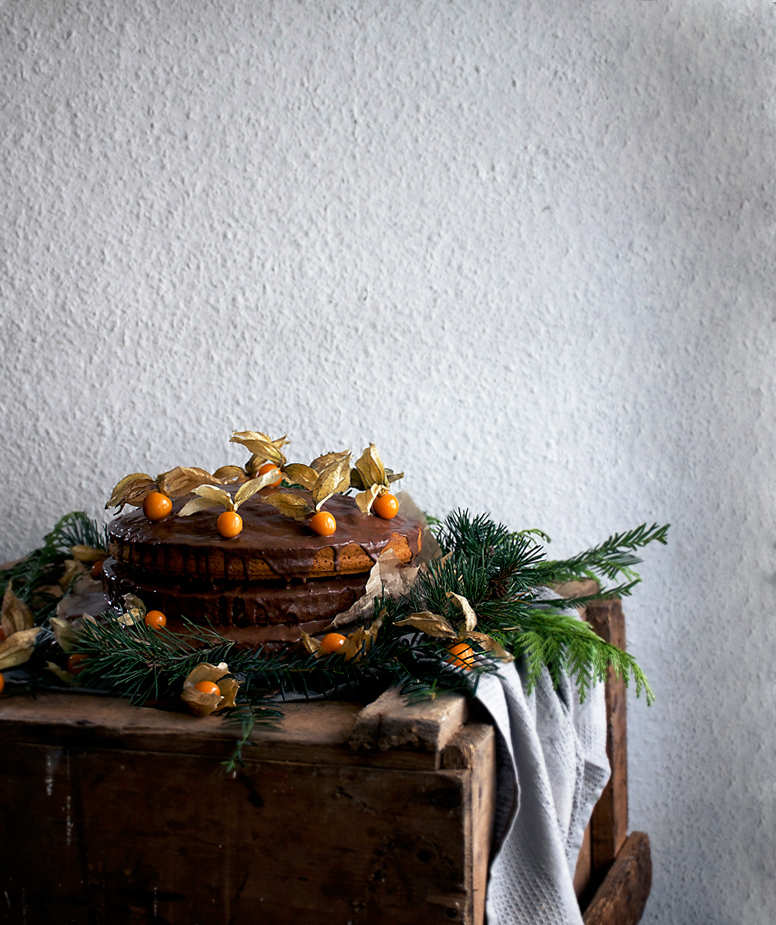 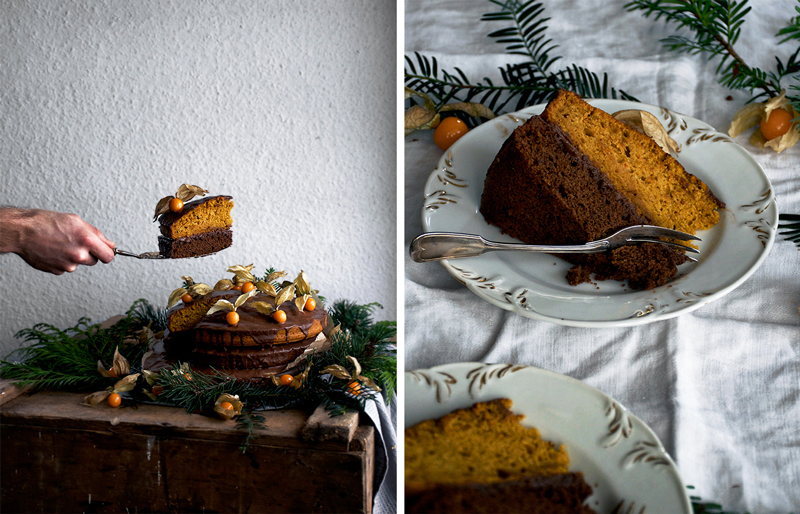 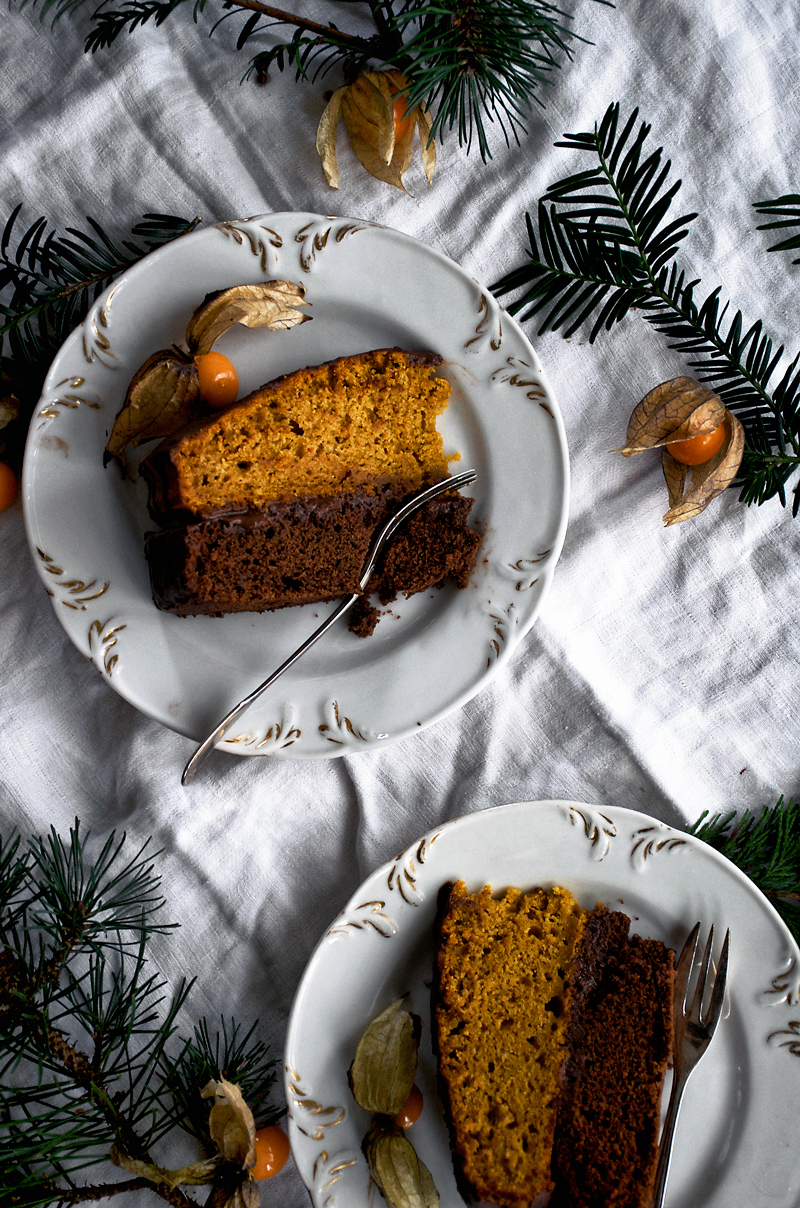 • In hindsight I suggest have the cake on the base of a springform, on a cooling rack, with a bowl or plate underneath to catch the extra chocolate that drips off the cake when you pour it. You can see the huge chocolate mess I ended up with here from pouring it on after setting everything up.
• Make sure you use bar chocolate for the glaze, because chocolate chips have additives to keep them from melting too much. Most dark chocolates won't have milk in them, but just look at the ingredients if you're making this for someone who can't have milk products.
* You can use canned pumpkin puree, but it's really easy to roast a pumpkin - just cut it in half, scoop out the seeds, and bake at 200C cut side down until you can pierce the skin with a fork. I used a hokkaido which is a little dryer than a sugar pie pumpkin.
** You can use a different light tasting oil, like grape seed, in place of the olive oil. Don't use coconut oil as the cakes will become too dense as they cool.
*** Don't bother with raw cacao since you're baking it anyway - natural cocoa powder is much less expensive and tastes great in cake. 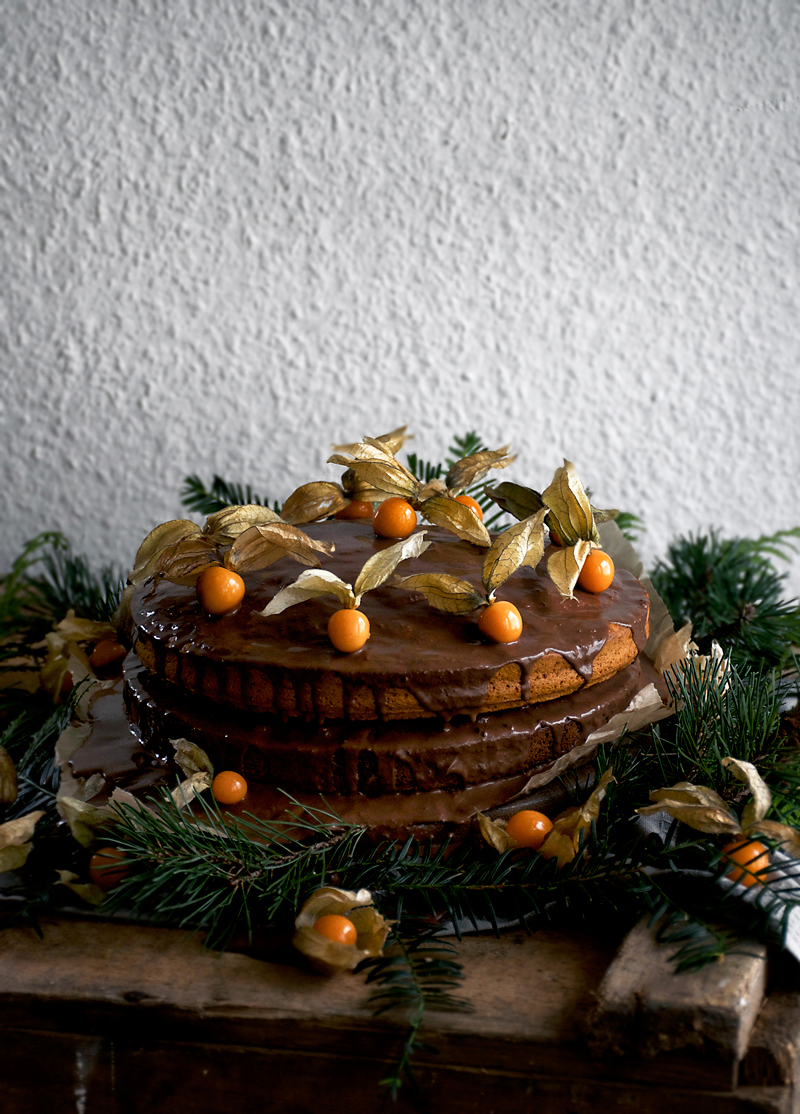