Vegan naan made with whole wheat spelt flour and just a handful of other ingredients. This healthier version of naan is really easy even if you’re not used to making bread, and an awesome addition to just about any meal. Skip to the recipe →

Sorry I’m a bit late on the last post this week, I went to see Swan Lake with my cousin last night and everything got a bit out of whack because I’m staying in the countryside right now. I’m sharing one of my most tested and highly prized recipes today though!

I’ve been making naan with varying success rates since I was a kid. It’s one of the easiest breads to make, minus needing a proper tandoor oven to make it the right way, hah. I make it all the time to have with curry, falafel, just with hummus, or whatever. It’s pretty speedy, less than two hours including the rise time, and Graham’s obsessed. We both love it, really.

My trick for really good naan at home is liberal amounts of coconut oil in the frying pan and adding a little salt to each side as you cook it. Not the healthiest, I know, but I started adding the extra salt after I was told that my sodium levels were too low and it’s helped a lot with reducing those black spots and lightheadedness. Everything tastes better with a little fat and salt and this bread is no exception. It’s still whole grain and in the end, definitely not the worst thing you could be eating. I think we probably have it about once a month or every two months and that’s fine.

The nice thing about this compared to most other yeasted breads is that it just goes through one rising period. After that initial rise, you just pull pieces off, roll them out, and fry. It’s not the naan that you’ll get at a restaurant but it’s pretty damn good. It ends up being a bit like a cross between naan and frybread, two very good things.

I’ll be sharing a recipe on Monday that uses this so keep your eyes peeled – but I do make it all the time just to have as a side to whatever we’re eating that night, even if it’s just hummus and veggies. Especially if it’s hummus. It is a bit of a special thing and I usually reserve it for that one day every month that I need proper carbs or risk death. I know a lot of you are probably following low- or no-carb diets right now but I eat a pretty high carb diet and don’t really get this ‘whole grains are bad for you’ thing.

Your kitchen might get a little steamy or smokey when you’re cooking this, so keep a fan on or crack a window. I’ve had the fire alarm go off a couple times and the neighbours are nosey enough without wild noises in our apartment, so now I always have the fan above the stove running and open the kitchen window.

This recipe makes a big batch, about a dozen pieces, and if you don’t want to have lots left over then I’d recommend cutting it in half. You might think you can eat six pieces but I always think that too and have to give up after three. It’s best fresh, but still pretty good on day two, so definitely don’t make more than you think you can eat in two days. Try to eat at least one while it’s still hot out of the pan.

One more thing – I had only ever made this bread on an electric burner but made this particular batch on a gas stove. I found it didn’t brown as well and ended up a crispier despite being the same recipe and method. It might be this stove but I’m not sure.

Looking for a flatbread recipe that doesn’t need yeast? Try my whole grain spelt tortillas, or socca for a grain free option. 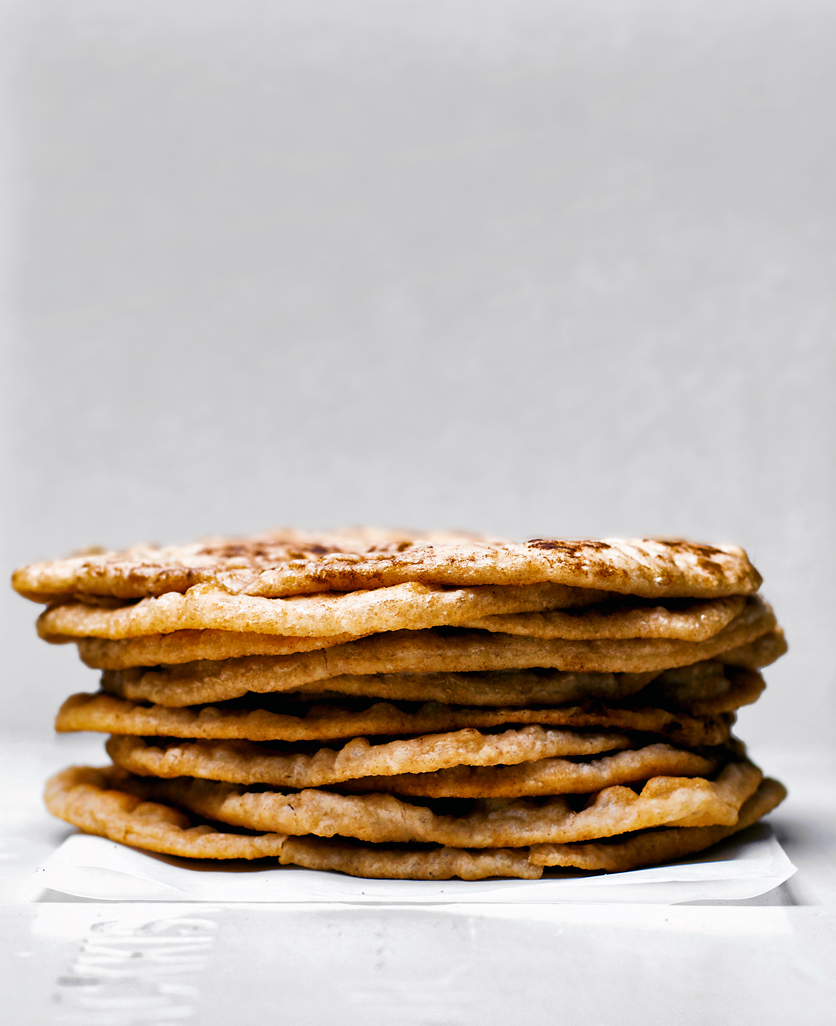