October 19, 2020 by Alexandra Daum
A seasonal vegan cauliflower curry with sweet potato, chickpeas, and greens. Serve this healthy curry with naan or rice for a plant based comfort food meal that you can feel good about.
Jump to Recipe 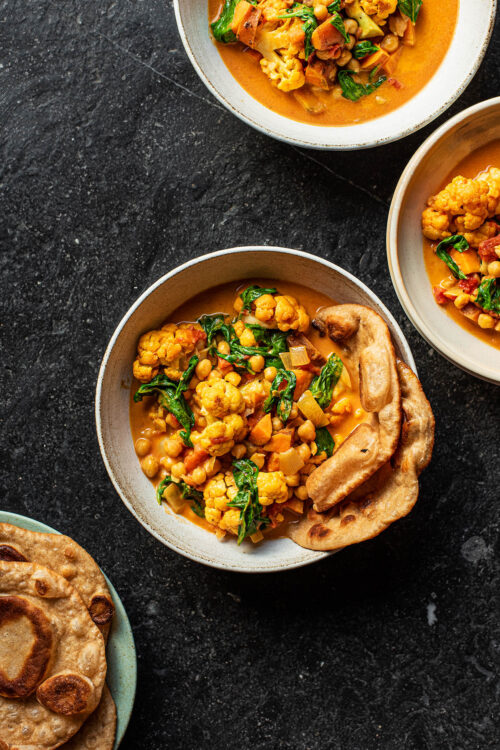 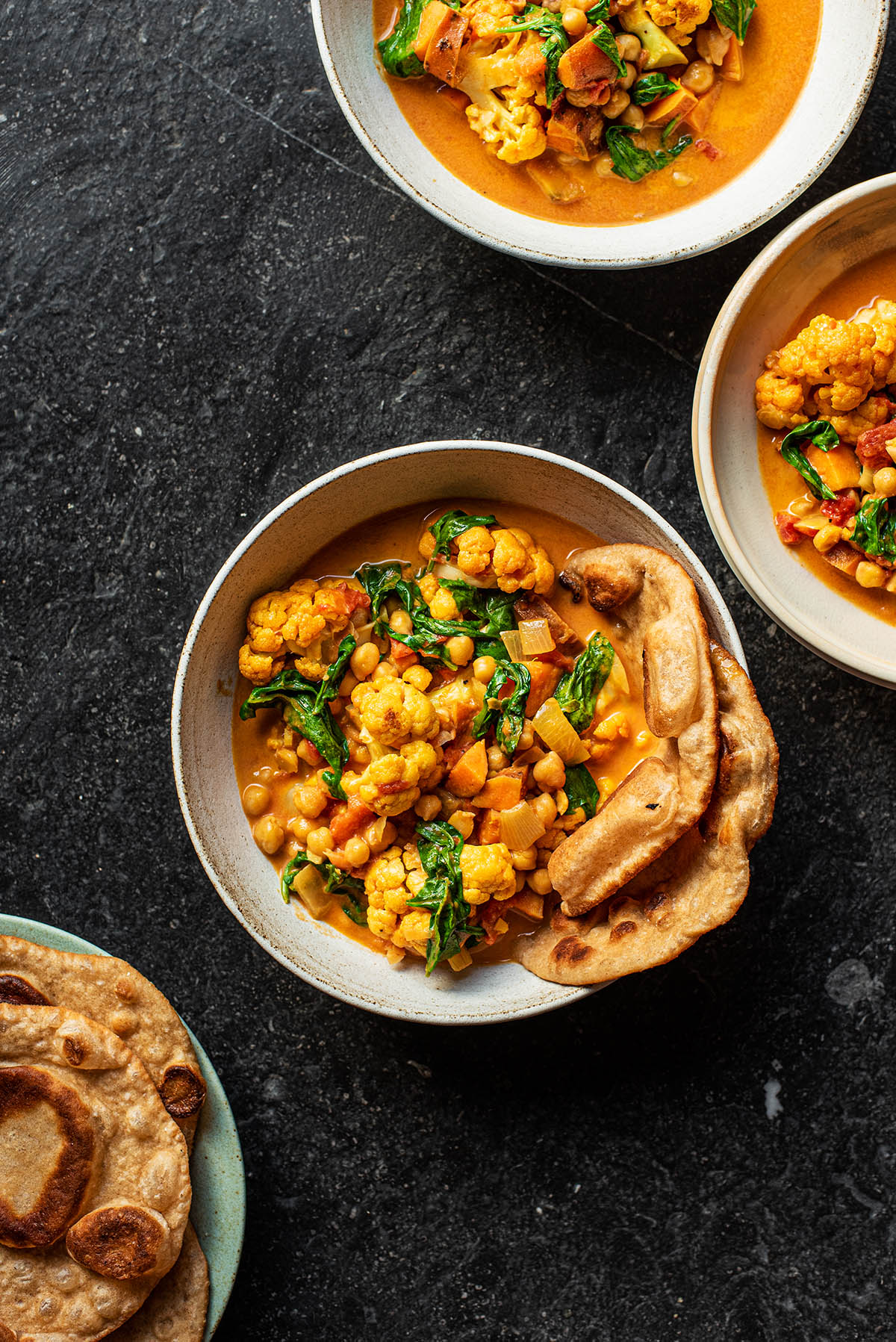 I always think of this as an autumn dinner, but it’s equally good well into winter. It’s a particularly enjoyable, comforting meal, with plenty of vegetables to make sure you feel good after eating it.

We often make this about once a week from about September right through end of November, when both cauliflower and sweet potatoes are readily available in this region. It’s an excellent weeknight dinner with a short-ish cooking time, though it’s well worth taking the extra time to make some spelt naan to have on the side.

If this is a familiar recipe to you, don’t worry! The post has been updated, and the recipe tweaked, but only to improve. The video will also need to be updated but it’s still pretty accurate. See below for some new notes and substitutions as well.

It might seem like a long list, but that’s largely due to the spices. See below for some tips on that if you don’t have a big spice cupboard.

Heat the coconut oil in a large pot, then add the onion. Cook for a couple of minutes, or until it’s translucent but not brown. Add the sweet potato and cauliflower, then cook for a few more minutes to brown slightly. This makes for a better flavour than adding them to the sauce to steam only.

Stir in the garlic and ginger, then add the spices. Cook for another 30 seconds or so, stirring. The spices should be fragrant.

Add the apple cider vinegar, then the tomatoes and chickpeas. Bring to a low boil, then reduce to a simmer and cook, covered, for about 20 minutes. If your vegetables are quite chunky then it may need a bit more time – go for fork tender on the sweet potato. Once the vegetables are cooked, stir in the coconut milk.

Remove the curry from the heat and stir in the greens (see substitutions). Taste and season as needed, and serve hot.

I really like this with naan, but rice is great too, and you really don’t even need a side with it. Without something carb-y to soak up the sauce, it’s a tiny bit like a soup and equally delicious.

Apple cider vinegar helps to cut through the sweetness of both the coconut milk and the sweet potato, and it’s not noticeable in the finished dish. It’s key to include some acidity somewhere in the dish, in just about any dish, to make sure it’s well rounded and tastes the best that it possibly can. I don’t recommend leaving it out (and it’s only a tablespoon).

If you don’t have all of the spices on hand, feel free to use a store bought curry powder or garam masala that you like. You can also leave a couple of spices out (the coriander and cinnamon in particular) if you know you don’t like them or you’re out.

Fresh tomatoes are a good substitute for canned if you have them, in the same quantity. Carrots also work well in place of the sweet potato.

I’ve used spinach in the curry pictured because it’s doing well in my garden right now. Rucola (arugula), chard, and kale are all excellent substitutions. If you’re using kale, you may want to cook it for a minute in the curry instead of just wilting it at the end. Frozen greens are great too, which you can see are used in the recipe video.

This post was originally published in March 2018. It has been updated with some tweaks to the recipe, new photos, and an updated post as of October 2020.