January 27, 2019 by Alexandra Daum
A naturally sweetened, gluten free, and vegan chocolate hazelnut tart, with a hazelnut cookie base and rich chocolate ganache filling. This elegant tart is surprisingly simple, with a press-in crust - no rolling needed!
Jump to Recipe 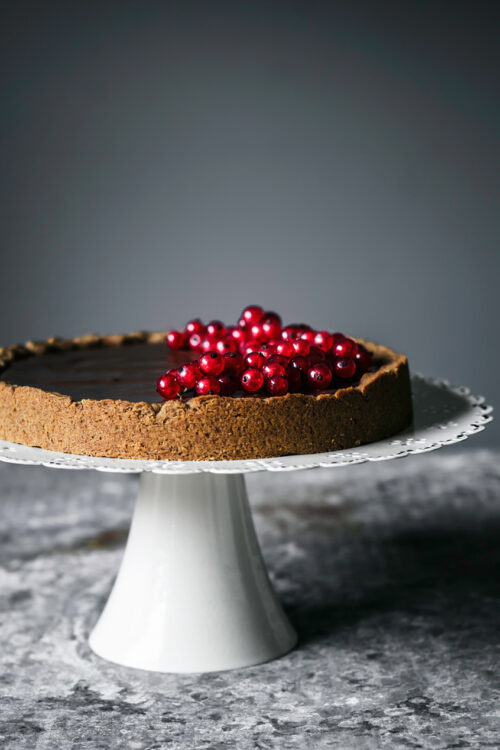 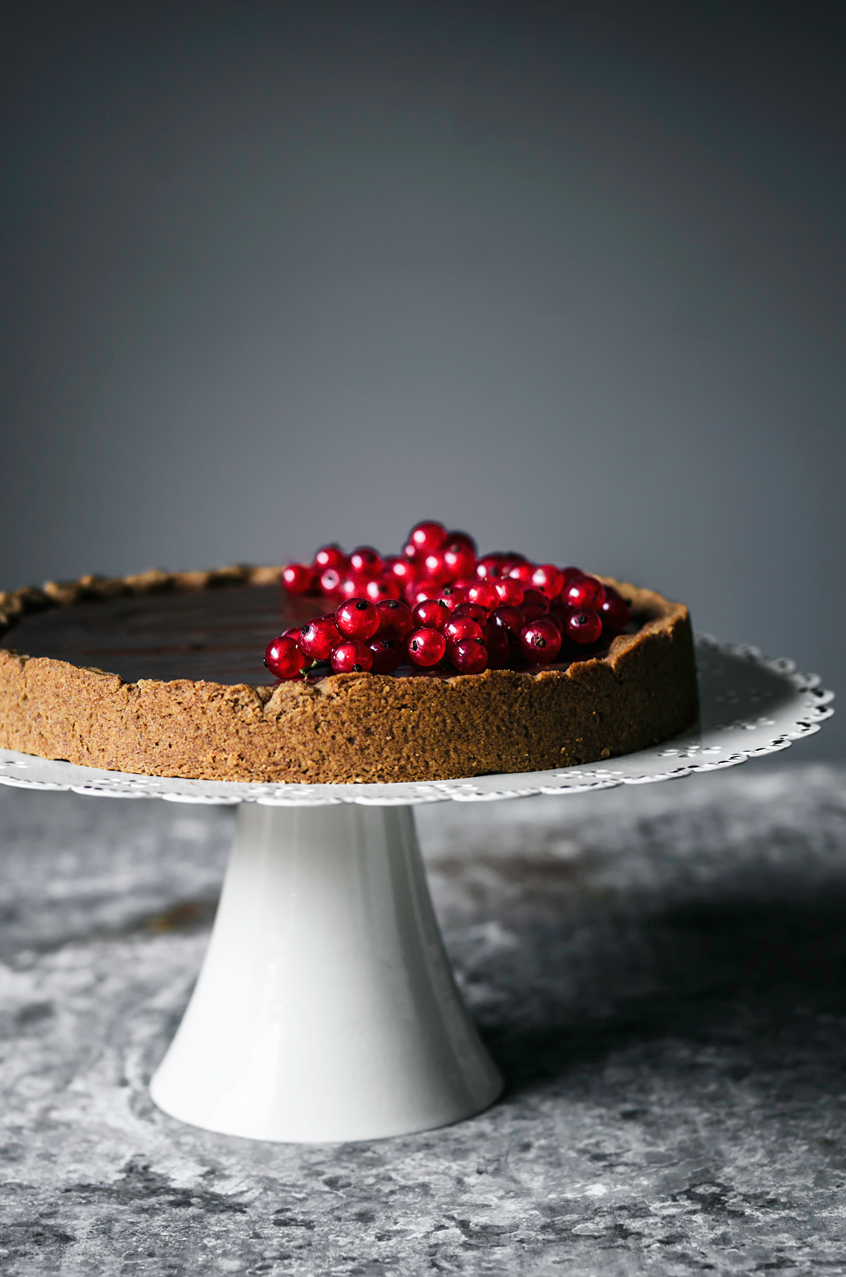 It’s my sister’s birthday on Wednesday, and I have a bit of a tradition here, especially since we moved away, to share a recipe for something that I’d make for her if I lived nearby. Last year I did a vegan chocolate snack cake and before that, grain free black forest cupcakes. She doesn’t follow a specific diet, but is a bit of a flexitarian these days and generally avoids dairy and sometimes gluten.

I know a lot of people think birthdays are for going all out but I’m a big believer in feeling good on your birthday! So if you know dairy makes your stomach upset, or wheat gives you a headache, or refined sugar makes you sluggish, maybe you don’t want to feel that way on your birthday and ruin the day a bit.

Or any day, really, and those feelings become more obvious the longer you avoid those foods because you have a new normal. Although this truffle tart is a healthier recipe, sweetened just with a little maple syrup and quite high in protein and healthy fats, it’s a nice option for a special day (but simple enough for any day).

This recipe kicks out most of those foods that tend to cause problems, with a grain free coconut flour base and coconut milk ganache filling. The thing is, chocolate is the saving grace of many healthier recipes, and you’d never notice!

Not that healthy food that is obviously healthy is bad, but sometimes you just want a dessert that ticks all the boxes or that you can bring to a party and know everyone will love without asking if it’s vegan/GF/whatever. This is one of those desserts. 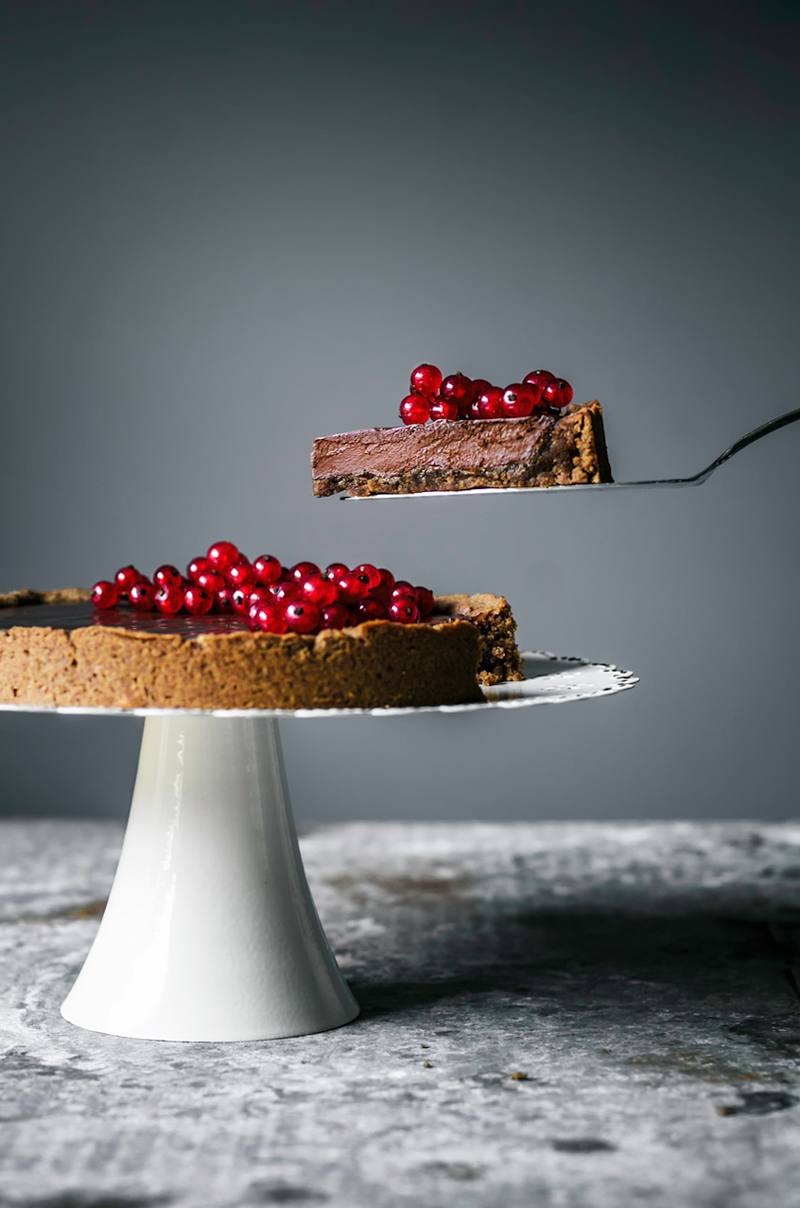 This chocolate hazelnut tart is excellent whether you have dietary restrictions or not – I first made it when I was back home in the summer, and my butter obsessed parents scarfed it down. Using a hazelnut cookie as the base was inspired by a reader, who took my ultimate peanut butter cookies and made a tart with that dough as a base a while back. It’s made with coconut flour and maple syrup for a really simple, healthy press-in tart shell.

I think hazelnut butter is the nicest choice here, but other nut butters are great too. Peanut, almond, even sunflower seed butter, all pair well with the chocolate ganache. Just note that depending on the consistency of your nut/seed butter you might have to add an extra splash of milk. Use runny nut butter if you can instead of the hard bit at the bottom of the jar. The base is more chewy than crisp, but the edge bits are a bit snappy.

The tart isn’t particularly large. It’s very rich, with the chocolate truffle filling and hazelnut base, so you just need a small piece. I took these photos during currant season, and while topping with a little fruit isn’t mandatory, it’s a good idea. A touch of acidity from fruit helps to cut through the richness. At this time of year some citrus would be good, like in this chocolate orange tart, or persimmon, or frozen berries. 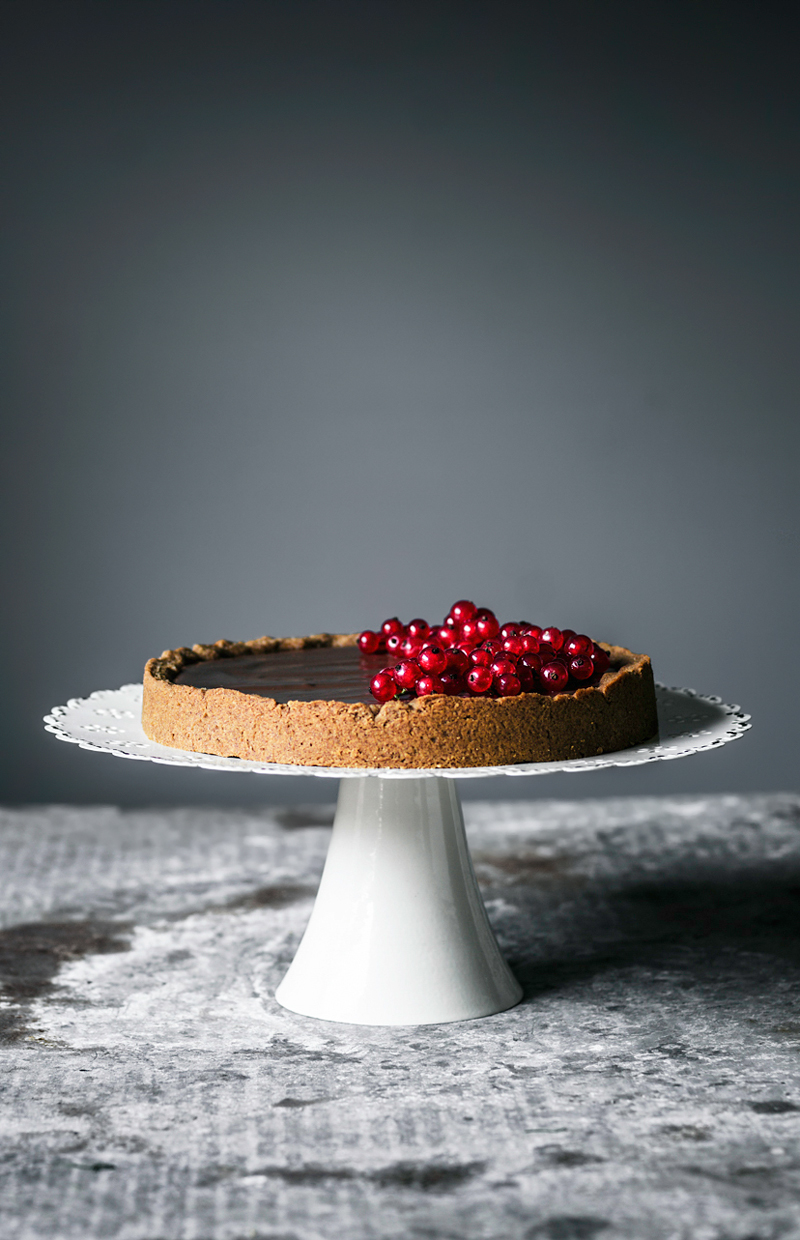 To make the chocolate hazelnut tart, you mix up the cookie base, press it into a springform, and bake for about 25 minutes. That’s the total oven time. After that, it’s cooling the shell, then filling with the easy ganache mixture, and leaving it until it’s set. Since you don’t have to roll pastry, or make a custard, or blind bake, it’s a very low stress recipe. No worries if the dough isn’t pressed in a perfectly even layer, either.

For the ganache, you heat coconut milk to a simmer and pour it over chopped dark chocolate. Give it a whisk, add a little vanilla, and you’re done. The trick to a good ganache is never to heat the chocolate, just the milk. It’s also much better with bar chocolate instead of chips, which have a stabilizer added so they don’t melt easily. If you need things to cool faster you can pop the finished tart in the freezer for half an hour and then refrigerate until solid, but once the ganache is set, you can leave the tart out at room temperature for a while.

It’s a simple, easy recipe, but the end result is surprisingly high impact, understated and elegant. Just right for an adult’s birthday or something like a wedding shower, but effortless enough for a weekend treat. 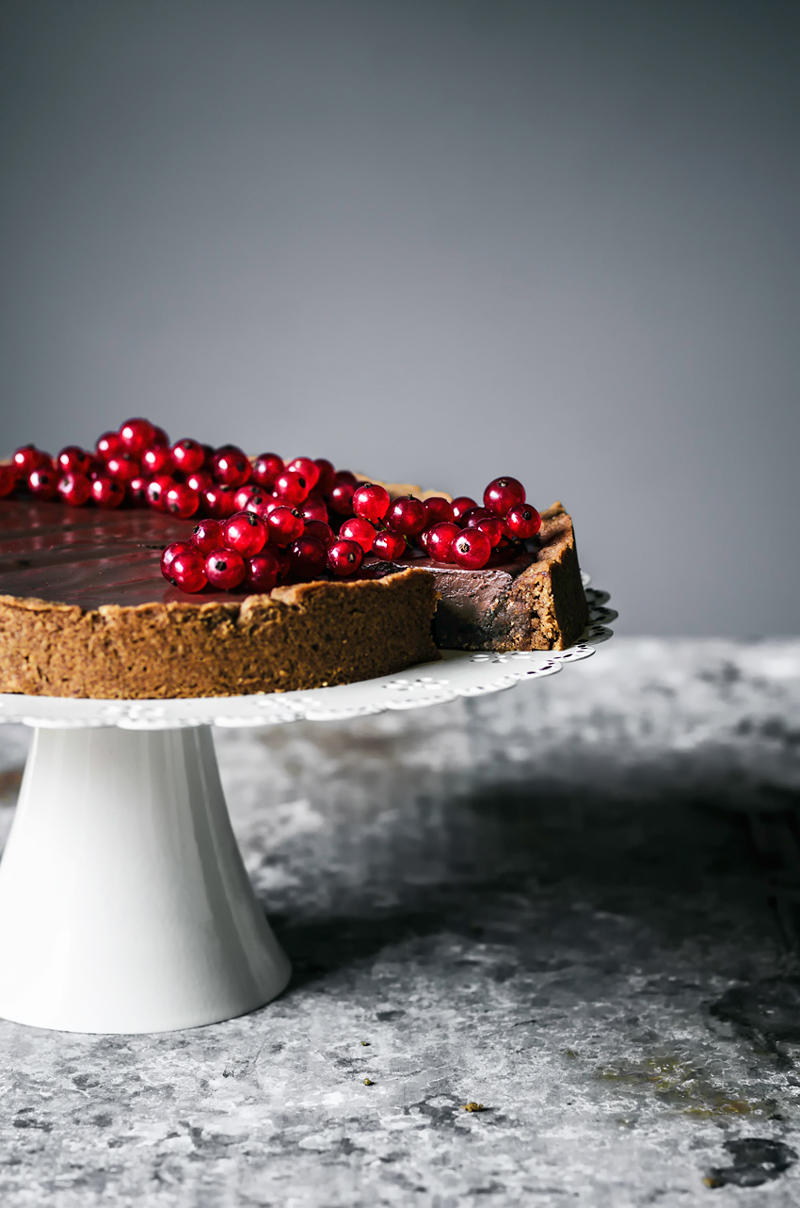 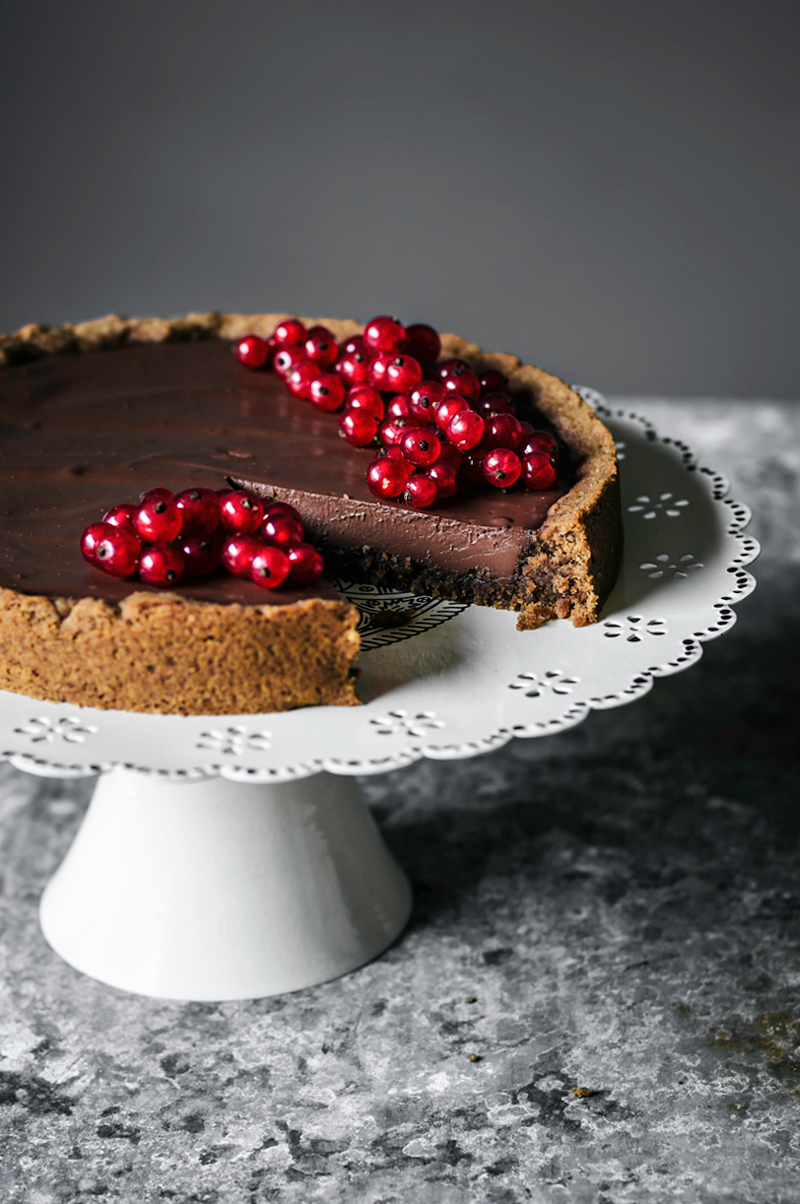 • If the dough base is too soft, first let it sit for 5 minutes and see if it thickens. If not, add another tablespoon of coconut flour and stir for another 30 seconds to incorporate and thicken. Coconut flour varies in consistency and you may need slightly more or less depending on the type - but you're going for a flexible ball of dough. • A tip to remove the base of the pan from the tart shell: freeze for 15 minutes, then pop the base off with a butter knife or spatula. It should pop right off. If you tend to have trouble with your pan sticking, cut a round of parchment paper to place in the bottom before adding the dough. 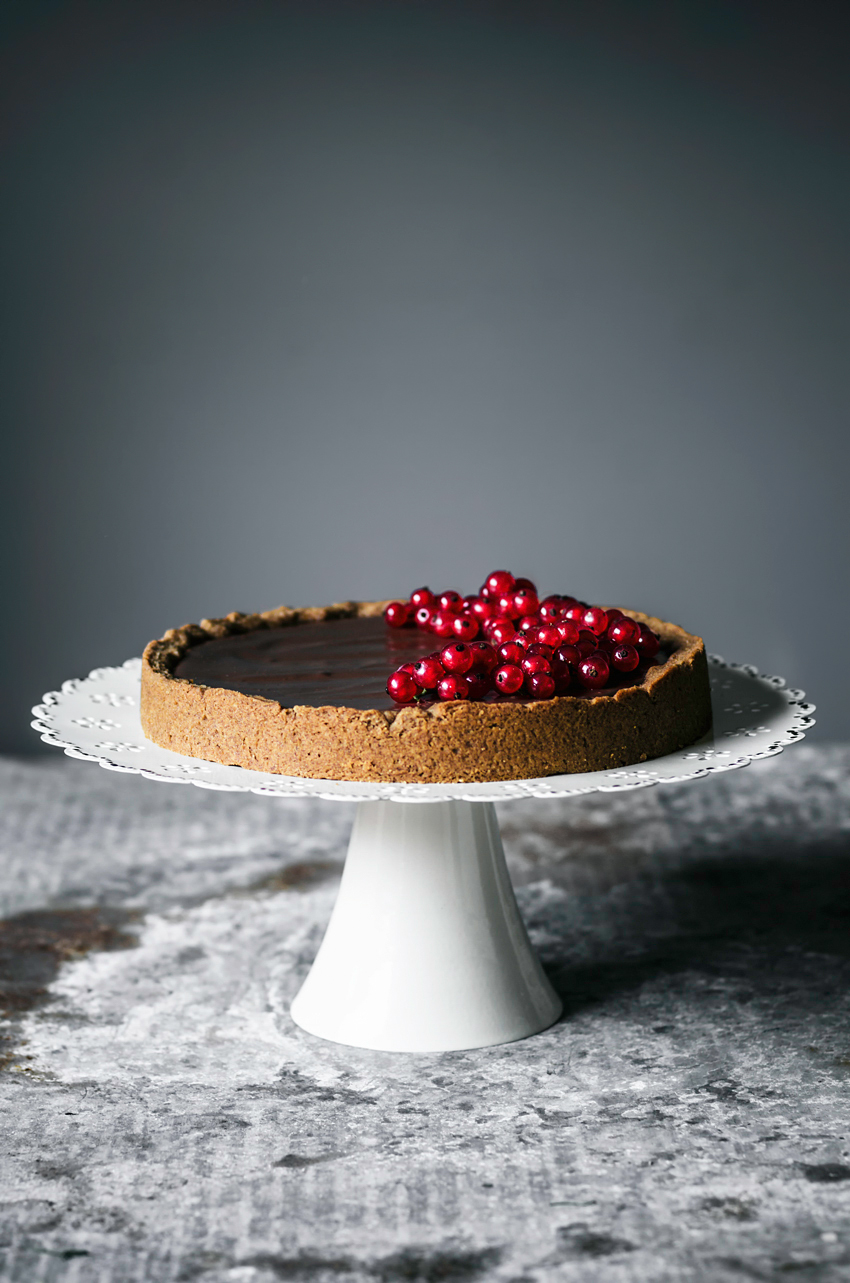